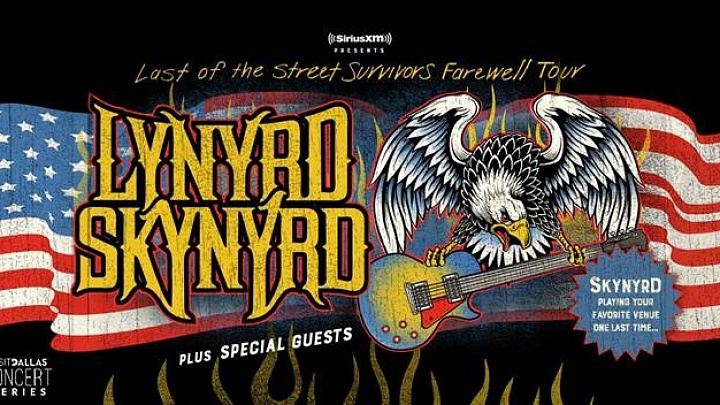 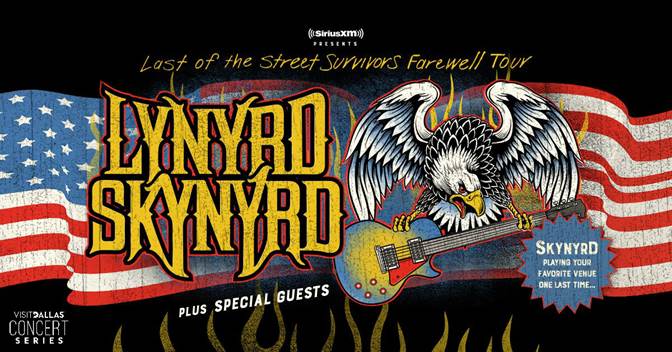 Kid Rock, Hank Williams Jr., Bad Company and Numerous Other Friends to Join the Rock and Roll Hall of Famers as They Visit Each Venue For the Last Time

Coming to Starplex Pavilion on Friday, May 11

After a career that has spanned more than 40 years and includes a catalog of more than 60 albums, Southern Rock icons, Lynyrd Skynyrd, will embark on its final Last of the Street Survivors Farewell Tour presented by SiriusXM. The first leg of the career-concluding tour, produced by Live Nation, will kick off Friday, May 4 in West Palm Beach, FL at the Coral Sky Amphitheatre and will wrap Saturday, September 1 in Atlanta, GA at the Cellairis Amphitheatre at Lakewood. The tour will cross the country throughout the summer over Fridays and Saturdays to give fans one last memorable night of classic American Rock-and-Roll.

“It’s hard to imagine, after all these years, the band that Ronnie Van Zant, Allen Collins and myself started back in Jacksonville, would resonate for this long and to so many generations of fans. I’m certain they are looking down from above, amazed that the music has touched so many,” said Gary Rossington, original and founding member of Lynyrd Skynyrd. Lead vocalist, Johnny Van Zant added, “we’ve been blessed by these great songs and the messages they carry to the fans. It’s been a true honor to try and fill in my brother’s footsteps for the past 31 years, keeping the music and his spirit, alive.” 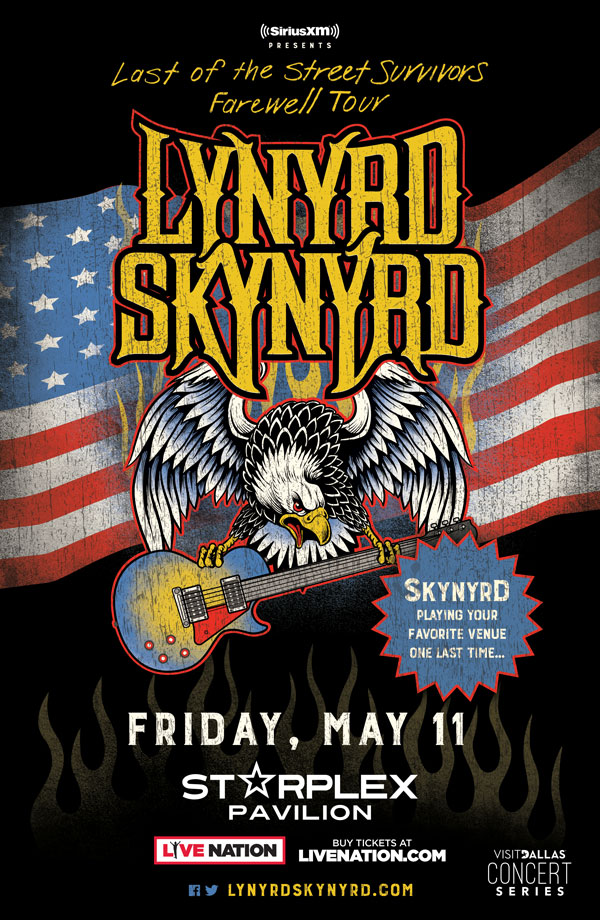 In addition to the Rock and Roll Hall of Fame band, they will be joined on stage by numerous friends throughout the tour, including but not limited to: Kid Rock, Hank Williams Jr., Charlie Daniels Band, Bad Company, Marshall Tucker Band, 38 Special, Blackberry Smoke and Blackfoot. The tour derives its name from their new song, ‘The Last of the Street Survivors’ and the band’s fifth studio album Street Survivors that is certified multi-platinum by the RIAA and includes the platinum-certified single, “What’s Your Name.”

The Last of the Street Survivors Farewell Tour marks a big moment for the three generation of fans, as the band has been consistently touring since it took a decade off in 1977. The iconic group is widely known for their live performances that usually include their beloved, elongated version of “Free Bird,” most often played at the end of their set, and their live albums including their multi-platinum certified One More from the Road.

The Southern Rockers are best known for their RIAA platinum-certified anthems “Sweet Home Alabama” and self-proclaimed signature song, “Free Bird,” that Rolling Stone said was “easily the most requested live song in existence.” With more than 30 million units sold over their career, the band, that USA Today called the “whiskey-soaked genre’s most popular and influential crew,” has become a cultural icon that has spanned five decades. With everlasting hits such as “Simple Man,” “Gimme Three Steps,” “What’s Your Name,” “Call Me The Breeze,” “You Got that Right,” and more, Rolling Stone named Lynyrd Skynyrd one of its 100 Greatest Bands of All Time.

Stay tuned for future announcements and specific tour line-ups in your markets.