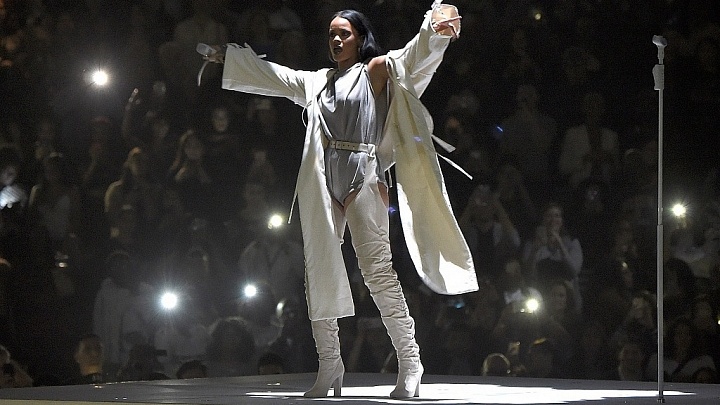 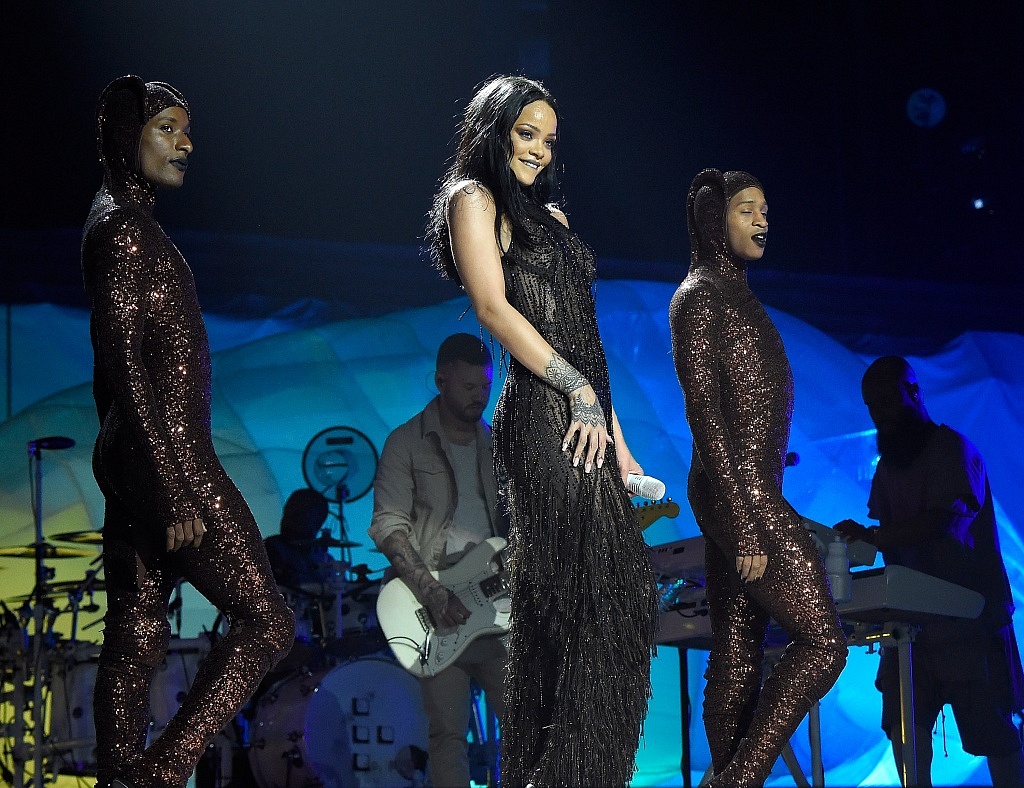 Dallas got their long awaited Rihanna fix Friday night, though not without a fashionably late entrance; something we’re learning to expect from the 28-yr-old icon. Dallas fans have historically had to wait a bit longer than others, noting the 2013 “Diamond” tour’s 8-month postponement in addition to that small matter of a stage fire cutting 2011’s “Loud” concert short mid-set. (Alright, maybe it wasn’t so small, and maybe it caused the entire arena to evacuate.) Rihanna had not forgotten though, playfully reminding the crowd, “Dallas, we got a bit of history.”

All went smoothly this time around, and it was well worth the wait. Houston’s Travis Scott worked the crowd with an extended set as they waited (and waited) for Rihanna to take the stage. The hype boy reminded fans they were there to party and repeatedly called out security for holding them back. Though Scott was a little trigger happy with the explosion sound-byte, he wins the vote for craziest crowd participation. For ten minutes, Scott impressively caused security to lose control of the crowd by instructing fans to fill the aisles of the arena floor. Security only pretended to check tickets as girls rushed through floor entrances, not admitting that they had lost control of the room. Dancing middle-aged women were eventually pulled down from their chairs as security worked to restore order and slowly but surely, girls were called back to their seats.

After a brief set change, the room fell dark as the opening notes of “Stay” filled the arena with sound. The Snap Chatting audience anxiously scoured the space to catch a glimpse of her. Screams climaxed as she emerged from the crowd to take her stand on a small stage set opposite the main stage. Curiously cloaked in white, she enchanted the arena with haunting vocals. While the star has been heavily critiqued for lip-synching, the show was full of extended moments much like this breathtaking entrance, where Rihanna’s raw talent reminded us she’s more than just a studio-polished pop star. 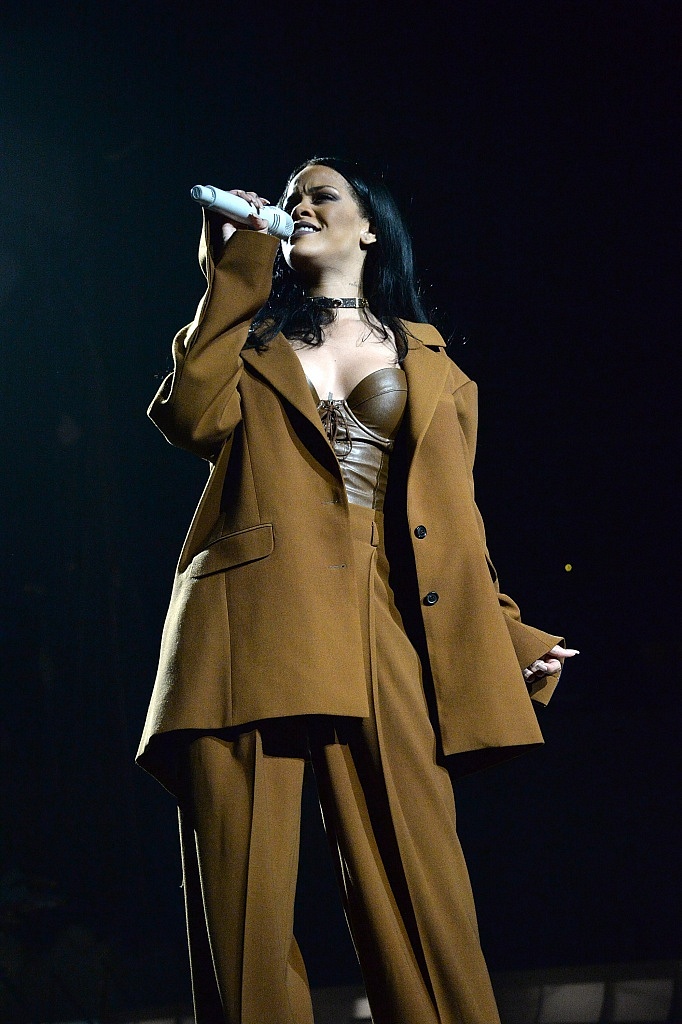 A clear rectangular prism lowered from the ceiling with intrigue and slowly glided over the crowd towards the pop-up stage. Climbing aboard the art form – a sculpture you could easily expect to see suspended at the Nasher – the prism cascaded over the crowd transporting Rihanna towards her stage. The carnal prowess owned the box, with lunges and thrusts during “Woo” and “Sex With Me” intense enough to make anyone sweat. Incredibly seductive and empowering, you’ll soon catch me attempting a similar rendition on my next airport moving walkway and failing miserably. (No, but really.)

Keeping with her stripped down vision of this tour, a handful of wardrobe changes maintained a muted palette promoting her recent fashion line. Unified by relaxed, hooded, urban-accented designs, the style was reminiscent of a certain someone’s Yeezy line. Gartered at the waist, full-length chap-style beige boots, paired with a hybrid of an American Apparel leotard and your boyfriend’s tee shirt stood out as refreshing and somehow practical. The impeccable yet relaxed design had me daydreaming again, momentarily thinking, I could SO wear those. I quickly snapped back and remembered I’m not Rihanna, and no one would actually want to see me in those beauties.

Her stage was decorated with an impressive band and incredible slew of dancers, easily plucked fresh from Cirque du Soleil. The energetic troupe consistently surrounded the singer with managed chaos throughout her performance. Dance moves took on an other-worldly vibe, as they took center stage allowing Rihanna a quick occasional costume change. Rihanna wasn’t the only one to swap outfits; the dancers donned everything from desert colored blindfolds to copper glitter-kitten onesies while somehow maintaining a toned down, cohesive feel. 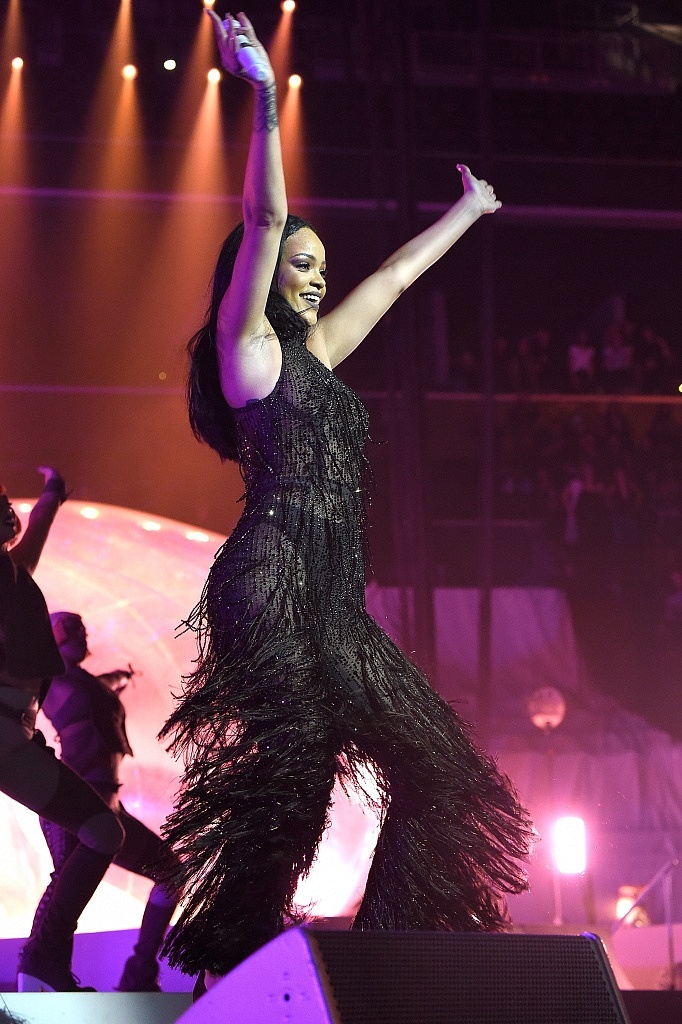 Rihanna’s stark white set design was simple yet unexpected, with large white inflatable cocoons remaining deflated for the majority of the show. Towards the end of the 90 minute set, a giant clear backdrop emerged, oozing oversized amounts of foam from the top. Whimsical foamy clouds drifted down to the stage as a drift slowly piled up high behind the band. The crew has surely busted out an impromptu post-show foam war at least once on their tour; if not, they’re not having enough fun.

Shortened versions of previous album hits kept the crowd from straying too far from the tour’s “Anti” album focus. These included a hot, angsty power mix of “Birthday Cake”, “Pour It Up”, and “Numb”. Ri was ready to start some shit with “Bitch Better Have My Money”. She then powered through excerpts of her prior chart topping singles and hip hop collaborations, “Live Your Life”, “Umbrella”, “Run This Town”, and “All of the Lights”.

Further highlights of the singer’s soulful, raspy vocals, she flawlessly performed popular “Anti” tracks including “Desperado”, the sexy Tame Impala cover “Same Ol’ Mistakes”, and Drake’s “Take Care”. She closed out the night with the Kanye West and Paul McCartney collaboration “FourFiveSeconds”, taking a break from the no-nonsense feel of the set by jovially encouraging her crowd to sing and clap along. Enticing versions of “Love on the Brain” and “Kiss It Better” followed as the star waved the crowd goodnight.

While other critics have argued Rihanna missed the mark on her attempt of a stripped down performance, the 2016 “Anti World Tour” proves otherwise. Remarkably minimalistic in style, set design and antics, contrasting to her past performances and those of her peers, this tour is focused on showcasing talents, and does so with ease. Much like the album itself, this show is a smart and elegantly curated statement letting the world know that RiRi is growing up.