Hatsune Miku materializes at The Bomb Factory in Dallas 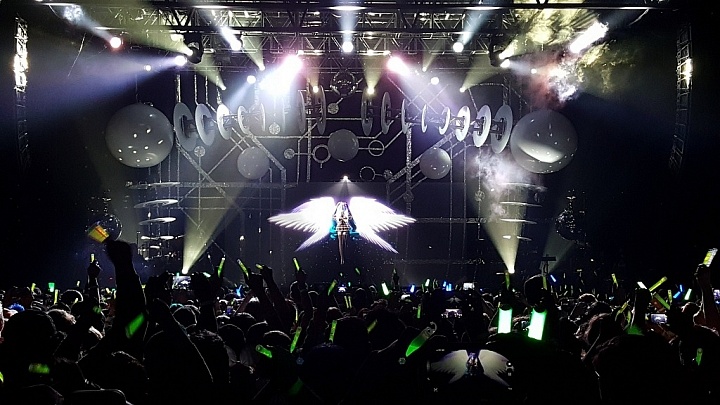 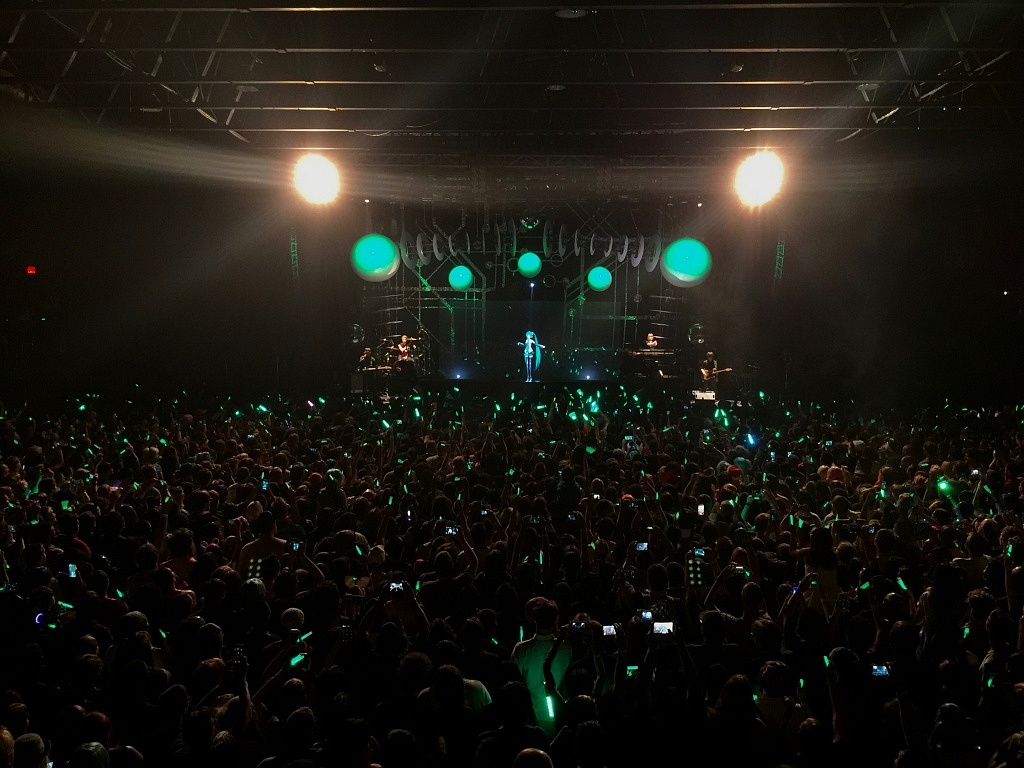 When dates popped up for Hatsune Miku’s return to America a few months back, I knew I was finally going to have to go and see her. As someone who grew up loving anime, J-Pop and everything associated with Japan, Hatsune Miku is right up my alley.

The thing with Hatsune Miku is that she’s not a real person. She’s a vocaloid – an avatar designed as the face and embodiment of a voice synthesizer product developed by Crypton Future Media. It’s a mouthful, I know, but it’s a lot easier to grasp once you catch a glimpse of Miku herself, an anime character come to life with long, aquamarine hair. In a live setting, she’s delivered as a hologram backed by a four-piece live band.

As I arrived at the Bomb Factory in Dallas on Saturday night, I realized people were head over heels in love with Miku. The line to get in wrapped around the entire building before snaking around what had to be more than two city blocks. There was more cosplay present than at any show I’ve ever seen – people of all ages and colors dressed like Miku and her other vocaloid friends – and there were even several cars decked out with Miku wraps and paint jobs. It was already entertaining before the doors to the venue had even opened.

Dallas was one of just a few cities announced for the tour and one of the only ones to sell out well in advance of the show. I’m not sure why there are so many Miku fans in Dallas, but they came out in full force. Once the doors opened, every individual who came in was handed a green glowstick – a staple of the live Miku experience where the entire audience waves their glowing green stick in sync with the music. 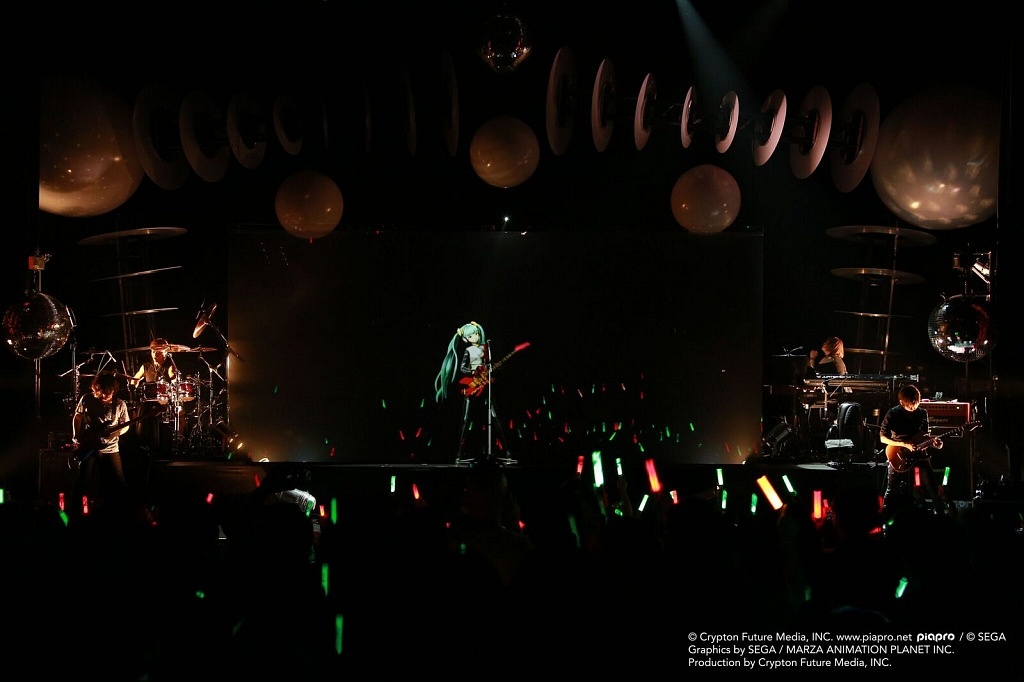 Opening act Anamanaguchi hit the stage shortly after 8PM, delivering a brief but exciting set filled with their chiptune based music. They had to perform somewhat awkwardly, as Miku’s hologram-delivering screen took up almost all of the real estate on the stage. Regardless, they made it work and they did a great job warming up the crowd for what was about to come.

It was finally time for the main act, and as the vocaloid character introductions began on the screen the free glowsticks popped up quickly, almost as an eerie, glowing green offering to the hologram goddess everyone was waiting for. And then she came – bursting onto her screen in a flash of light, Miku was there and the show got started with longtime show staple “World is Mine”.

The four-piece band, guitarist Takahiro Misawa, drummer Kensuke Ito, keyboardist Meg.Me and bassist Tsuguhito Konno, were in fine form. If you consider yourself a fan of “real” music and can’t buy into a show fronted by a digital character, well, make no mistake about it – her band has chops. While most of the material of the show fits nicely in the J-Pop category, there were a few slower numbers and even some full on EDM bangers that proves the band has range and versatility. For most of the show the band was left in relative darkness – after all the crowd was there for Miku – but they are the ones really responsible for bringing the music to life. 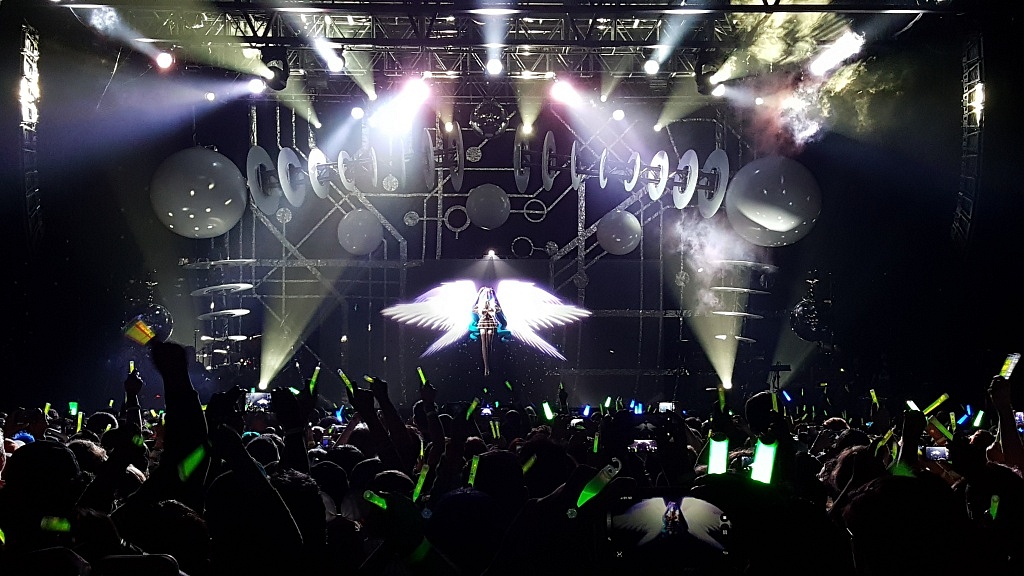 The show was filled with older Miku favorites and lots of newer material from the EP released for this year’s expo tour. Crypton Future Media selects the songs for the tour from thousands and thousands of Hatsune Miku tracks that have been created by individual songwriters and artists. There is no real “official” songwriter for Miku, instead the material is almost crowdsourced as anyone who has the money can purchase and use the vocaloid software. It’s one of the most interesting aspects of the entire Hatsune Miku experience, and I’m sure it’s a pretty neat experience for these songwriters to see Miku come to life performing their material.

And of course, Miku brought along her other vocaloid friends. All in all 6 different vocaloids made an appearance – Kaito, a male character with short hair performed his popular “Snowman” track, followed by Meiko performing “Change Me”. Digital twins Kagamine Rin and Kagamine Len both got a solo song each and then paired up for one of the strongest moments of the night, “Remote Control”. All of these characters have their own voices, dance styles and arguably personalities, and it’s cool to see them brought to life.

Other than Miku, however, none of these other vocaloids enraptured the crowd quite like Megurine Luka. She made three appearances throughout the evening – performing two duets with Miku, complete with synchronized dance moves, and one song later in the set “Just Be Friends”, a pretty straightforward synthpop tune that seemed to get everyone in the crowd singing along.

All in all, Miku and her friends performed a total of 27 songs. Most of these songs featured a costume change for Hatsune Miku, keeping the digital presence fresh and exciting for the entire show. As far as the hologram technology is concerned, it is mighty impressive. I stood toward the back of the crowd and while you can obviously tell Miku is not a real person, the character’s animation and movement comes across as very life-like while managing to avoid the creepy uncanny valley that sometimes comes with a digital character. She doesn’t seem to be pretending to be human – she just is what she is. 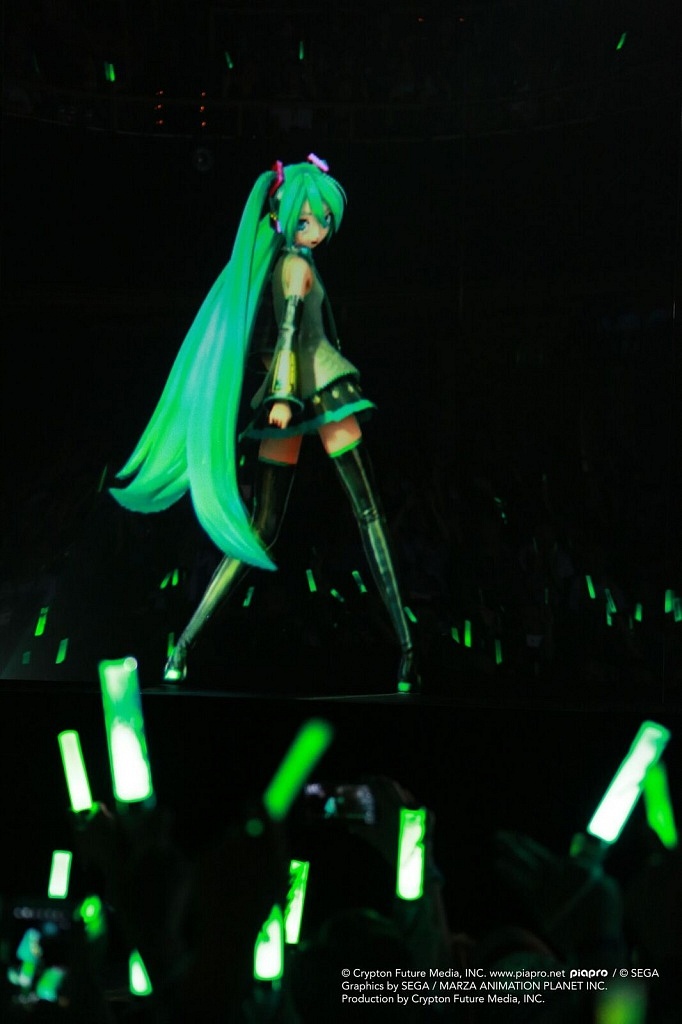 There were times when Miku would do something that no human could ever do – like singing in an overwhelmingly fast cadence during The Disappearance of Hatsune Miku, or sprouting wings and flying during a song that is literally called The Intense Singing of Hatsune Miku. While the company behind Miku has never given her an official “personality,” the songwriters and creators behind Miku’s music have. “Glass Wall”, for example, examines Miku’s sadness at being trapped behind a “screen” and unable to connect with the people listening to her. It’s actually quite sad, and fans can’t help but become attached when they hear Miku explain her situation.

During the encore, opening act Anamanaguchi came back out to take over as Miku’s band. They performed their own song Miku from the Expo 2016 EP, a personal favorite of mine, and then also tackled the fan favorite “39”, which might have been the most well-received song of the evening. Eventually they left the stage and more encore cheers started before Miku appeared alone with a digital keyboard to perform her final song, “Star Fragment”.

As her solo finale ended, Miku bowed and waved to the crowd before thanking them for coming. As she teleported away, I started to question if this was either the future or the end of pop music. We’ve long had pop performers who lip synch when performing live and don’t display much of their own personalities – is it time to give way to a digital performer who’s personality can be whatever it needs to be for a given track? After all, if a crowdsourced J-pop hologram can sell out a 4,300-seat club in the middle of Texas in just a few days, what can’t she do? We’ll just have to wait and see.