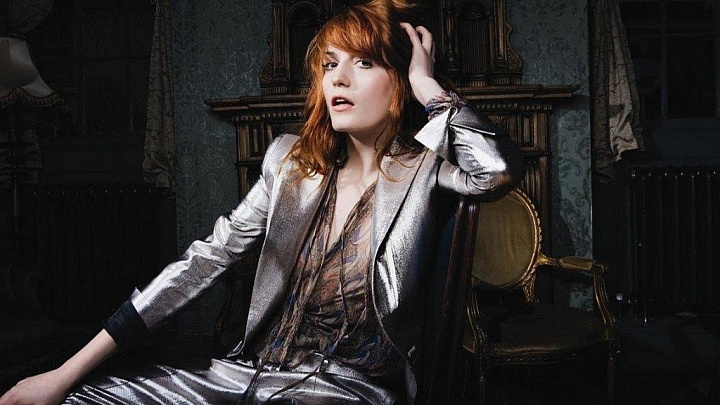 NORTH AMERICAN “HOW BEAUTIFUL” TOUR
KICKS OFF THIS MAY

NOMINATED FOR FIVE AWARDS
AT THE 58TH ANNUAL GRAMMYS

After the June 14 show sold out in just days, Florence + the Machine is adding a second night with Grimes at Brooklyn’s Barclays Center—June 15—to her North American “How Beautiful” tour.

Following a gigantic 2015, which saw the release of her first U.S. #1 album How Big How Blue How Beautiful (Republic Records), Florence will tour with support from Grimes and Of Monsters And Men. Dates include Chicago’s Hollywood Casino Amphitheater June 12, Boston’s Xfinity Center June 7 and many more. The tour kicks off May 13 in Miami.

Furthermore, Florence + the Machine are nominated for five awards at the 58th Annual Grammy Awards: Best Pop Duo/Group Performance for “Ship to Wreck,” Best Rock Song and Best Rock Performance for “What Kind Of Man” and Best Pop Vocal Album for How Big How Blue How Beautiful. How Big How Blue How Beautiful is also nominated for Best Recording Packaging.

With three albums to her name, Florence continues to reach new heights—How Big How Blue How Beautiful reached #1 in the U.K. (her third #1 album in the country), Australia, New Zealand, Ireland, Switzerland and Canada after reaching the top spot on iTunes charts in 24 countries worldwide. Download the album via iTunes here and stream it via Spotify here.

How Big How Blue How Beautiful continues to receive critical praise:
50 Best Albums of 2015

“Florence Welch’s most personal, vulnerable and moving album to date”

“A sexy record that sticks to some familiar themes: a woman wrestling with lovers and emotions, often with biblical allusions, liquid-courage assists and a near-violent intensity…a magnificent bit of British brooding.”
50 Favorite Albums of 2015

“There were already few singers who could match Welch for vocal power, but on songs like ‘Queen of Peace’ and ‘Long & Lost’ she lets pain mix with the pageantry and lands somewhere near the tarnished uplift of Rattle & Hum-era Bono”
40 Best Albums of 2015

“Florence + the Machine delivered one of the most galvanizing sets in recent festival history. Flame-haired singer Florence Welch…was something closer to warrior woman: an outsize physical presence who doesn’t so much sing as emit deeply emoted sounds out of some wellspring of the collective unconscious who commanded her space and demanded undivided attention. She was riveting.”
The 10 Best Songs of 2015—”What Kind of Man”

“The punk-rock song reimagined, brilliantly, as a spell, an invocation, a hex. Florence Welch’s vocals are nothing short of sorcery.”
Best Songs of 2015—”Ship to Wreck”

“The best song of her career.”
Favorite Albums of 2015

“Bold, brassy and buoyant…a testament to her ability to straddle pop and rock, convention and alternative.”
The 50 Best Albums of 2015

How Big How Blue How Beautiful was written and recorded over the course of 2014. Produced by Markus Dravs (Björk, Arcade Fire, Coldplay) with contributions from Kid Harpoon, Paul Epworth, John Hill and James Ford, the album follows Florence’s globally acclaimed Lungs (2009) and Ceremonials (2011). Download the album HERE.

Grimes’ 4th album, Art Angels (4AD) had prime placement on basically every 2015 End of Year list, with #1 spots from NME, Stereogum, Gorilla Vs. Bear and others. Jon Pareles of the NY Times called the album “a solo tour de force,” Stereogum said “In 2015, nothing sounded better,” and Rolling Stone called it a “triumph.” Time Magazine named “Flesh Without Blood” the #1 song of the year while iTunes named Art Angels the #1 Indie Album of 2015 and it finished out the year at #1 most added on CMJ Radio. In 2015 alone, she graced the covers of The FADER, Nylon, Dazed and Confused, NME, Flare and more.

Of Monsters And Men have come a long way from their native Iceland. They quickly became a phenomenon in 2011 with the quadruple-platinum “Little Talks” and their chart-topping debut, My Head Is An Animal, which has since moved 2 million copies worldwide. This year the band returned with their sophomore album Beneath The Skin which garnered anthemic hits including “Crystals” and “Empire.” They have charmed TV audiences with appearances on The “Tonight Show with Jay Leno,” “Late Night with Jimmy Fallon,” “The Graham Norton Show,” “The Ellen DeGeneres Show,” “Good Morning America”, and “Saturday Night Live.” The group has traveled across the globe performing at sold out iconic venues and festivals including Lollapalooza, Bonnaroo, Coachella, Newport Folk Festival, Osheaga, Glastonbury, Reading and Leeds, Pukkelpop, Austin City Limits, and Splendour in the Grass, Boston Calling, Sasquatch and more. In the midst of it all, they lent the single “Dirty Paws” to a trailer for The Secret Life of Walter Mitty and the iPhone 5 introduction video, “Silhouettes” was featured on The Hunger Games: Catching Fire soundtrack, “Crystals” selected for Disney Pixar’s latest blockbuster The Good Dinosaur, “Thousand Eyes” was used in Netflix’s “Jessica Jones” trailer and not to mention an upcoming cameo on HBO’s “Game of Thrones.” Beneath The Skin debuted #1 on the iTunes Overall Albums Chart and received critical acclaim with Entertainment Weekly calling it “One of the biggest albums of the summer.”

*with Grimes
†with Of Monsters And Men