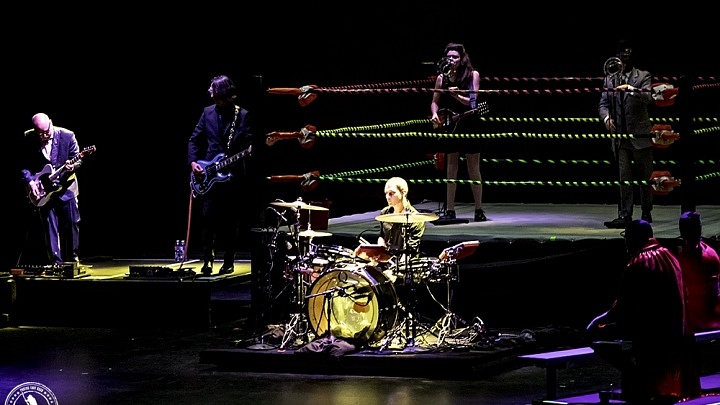 The Majestic Theatre does not generally strike one as being a place to go see a rock show. The grandeur of it just doesn’t fit the typical vibe associated with rock. Luckily, Puscifer does not fit the mold of a typical rock band.

The band that is the creative subconscious of Maynard James Keenan was playing (and returning to) said Dallas venue on this Tuesday night, this show being the kickoff point of their Money Shot Tour in support of Money Shot, which had been released just days before.

The fact that Puscifer is not your average band meant they had an opening act that could be considered unorthodox as well. It wasn’t even a band. For around half an hour the sold-out crowd was treated to a lucha libre show, five wrestlers in all going up against one another. It could have been very out of place, yet everyone enjoyed it, many shouting and getting quite into what was going on.

The ring was eventually moved out of the way; the lights having gone out, making it hard to make anything out on the stage, other than the drum kit on a riser that was wheeled out.

The changeover time was mere minutes; a couple videos playing to kill time. Both featured Keenan in costume of, shall we call them, characters that he has dressed up as in the past with Puscifer; one getting the message out there that use of phones would not be allowed this night. Sure enough, any mobile devices were not even allowed outside of one’s pocket, as they wanted the concertgoers to just focus on the show, a show that transcended what a normal concert is.

The wrestling ring was still on stage, back center of it; the drum kit being at the forefront of the stage. It was in that arena where Keenan and Carina Round stood, staying there for the first handful of songs, which consisted of “Simultaneous”, “Galileo” and “Agostina”. You could call that a prelude, I guess.

That was one interesting thing about this performance (and tour), they had divided the show into acts. Breaking each one up was the wrestlers, the band leaving the stage to them for a few moments before returning. For example, after those first three songs, the wrestlers did a little more of their thing, and then Act I got underway.

Keenan’s attire even fit with that lucha libre theme, as he wore a mask like what those wrestlers do, being sharply dressed, too.

Over three acts (on top of that opening segment) they treated fans to fourteen songs, drawing from every studio album or EP they’ve released. The music was the main focal point, Keenan seldom addressing the audience, like when he early on mentioned this crowd was helping them pop their cheery for this tour.

That style worked best for them and seemed to be just what the fans were wanting as well: being bombarded by a series of songs. Of course, Money Shot was the primary focus this night; “Grand Canyon” sounding as epic as the landmark itself looks. They would even return for an encore, offering up two more cuts off this new album, “Autumn” concluding the show.

Perhaps the thing about this show/tour that best speaks to Keenan’s prowess as a musician and just how beloved he is in general came from an aspect probably few thought much of. The wrestling fits with these shows. It’s part of the theme and is not only good, it creates an entirely unique element. Still, I have to wonder, how many bands out there could get by with something like that without having a line of fans heading for the door? I would guess only a handful at best.

If most bands tried something of that sort, I think it would go over the heads of many of the patrons, but not with Puscifer fans. It may sound strange in reading about it, but if you see it at one of their upcoming shows, you’ll realize how it all ties together. It just works, which is what you’d expect from a band with Maynard James Keenan at the helm.

They were on fire this night. The well-layered harmonies, the blazing guitar riffs and everything else already sounded superb and was very pristine. So if they’re already that exceptional right at the start of this run, what will they be like three weeks or so from now? I can only imagine, but if get a chance to see Puscifer (this tour runs through mid-December), you definitely need to take it.

Act 1
Vagina Mine
Horizons
The Arsonist
The Remedy