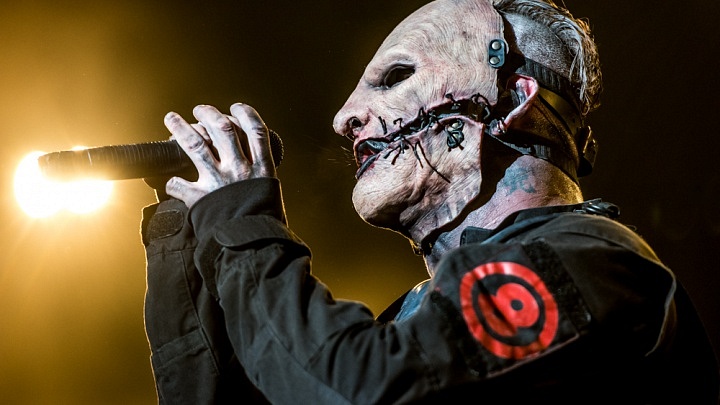 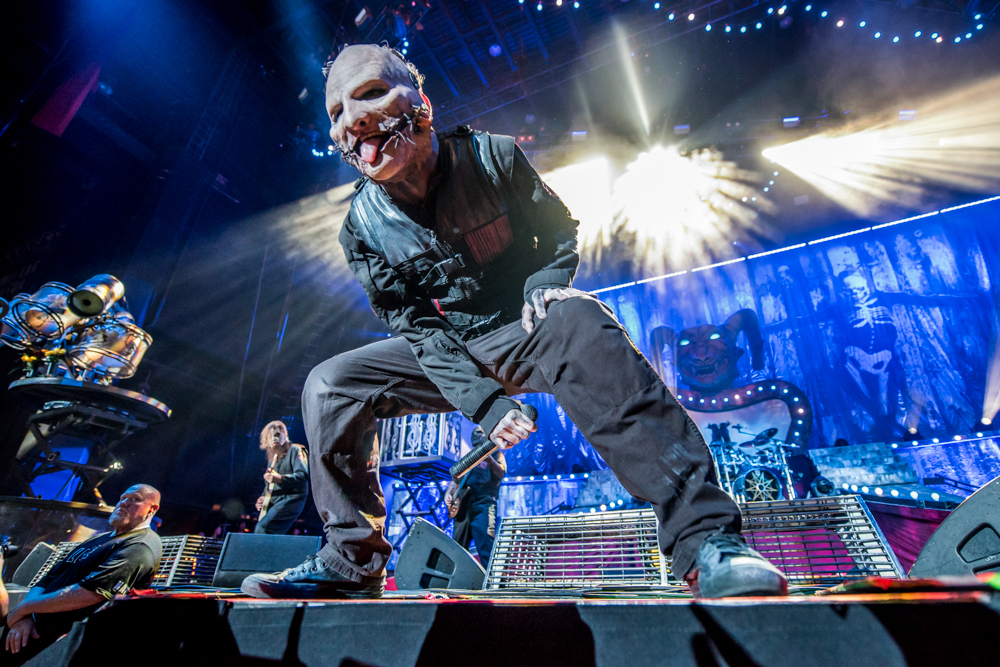 Slipknot has to be one of the hardest working bands in the music industry. As far as touring goes, I think few acts are as ambitious as they are, or at least have been recently.

Not even a full year ago they released .5: The Gray Chapter, their first studio album in six years. Knotfest 2014 saw the band return to the stage, a massive tour quickly following in support of the new record, and it began in Texas.

They toured heavily around the U.S., went overseas, have played many festivals and other headline shows thus far in 2015, and since July had again been trekking across America for Summer’s Last Stand Tour. This time, Texas was the last state they hit, the show happening on this Saturday night in Dallas at Gexa Energy Pavilion being the terminus for them.

The outdoor arena was pretty much sold-out last Halloween when they played and it was no different this warm night of September, much of the crowd arriving early to see the opening acts, such as Lamb of God. Still, everyone was clearly eager to see what Slipknot had planned. As Corey Taylor said at one point during the performance, everyone there was part of one big heavy metal family, having relatives all over the world, and that camaraderie and support was often present this night. 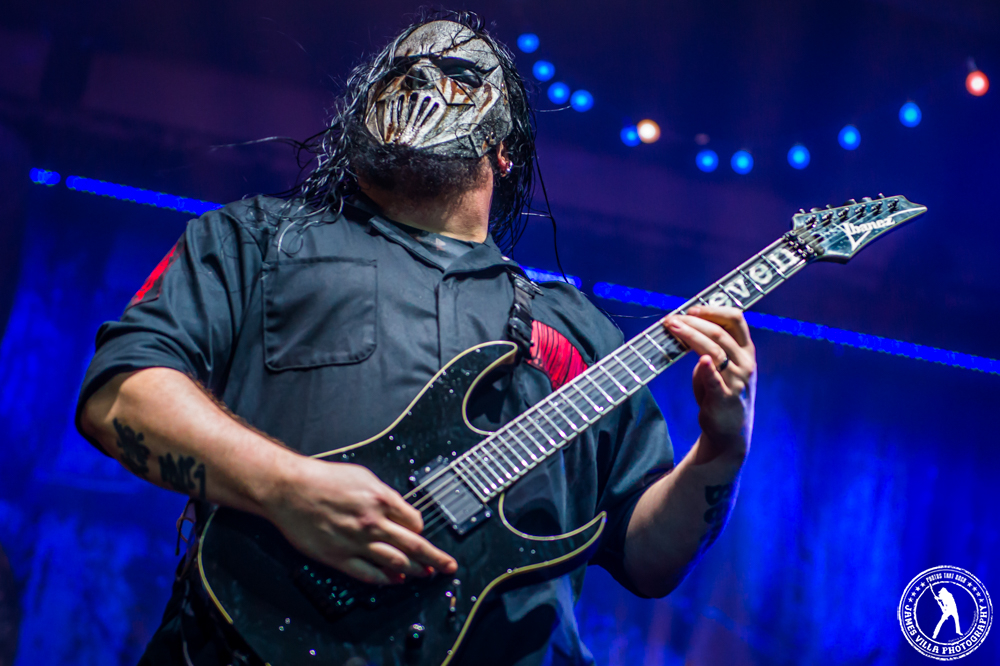 They seemed to focus more on their new album this night than any of the other handful of times I’ve seen them in the past year, “Sarcastrophe” still having the opening slot. It’s one the fans have only grown fonder of over the last eleven months, cheering its start while Taylor rapidly banged his head to the beginning of the brutal song. Percussionists Shawn “Clown” Crahan and Chris Fehn were vital in the aggression of that one, each beating on their kits — located on platforms than spun around and were often rising and descending. A couple songs later they would leave their posts momentarily, joining the rest of the band on the stage as each struck a snare.

Taylor made sure to point out this was the final show on this current tour, noting how good it was to be back in Texas among people who understood what metal was all about. Indeed, the patrons did, cheering for “The Devil in I”, often singing along, the frontman doing everything he could to get the strongest reaction possible from the fans; guitarists Mick Thomson and Jim Root springing into action on the heavier parts, thrashing around and holding nothing back.

They may have been on the road much of the summer, though it was clear very early on they weren’t worn down from it, this Dallas show seeming like it could have been the tour kickoff. 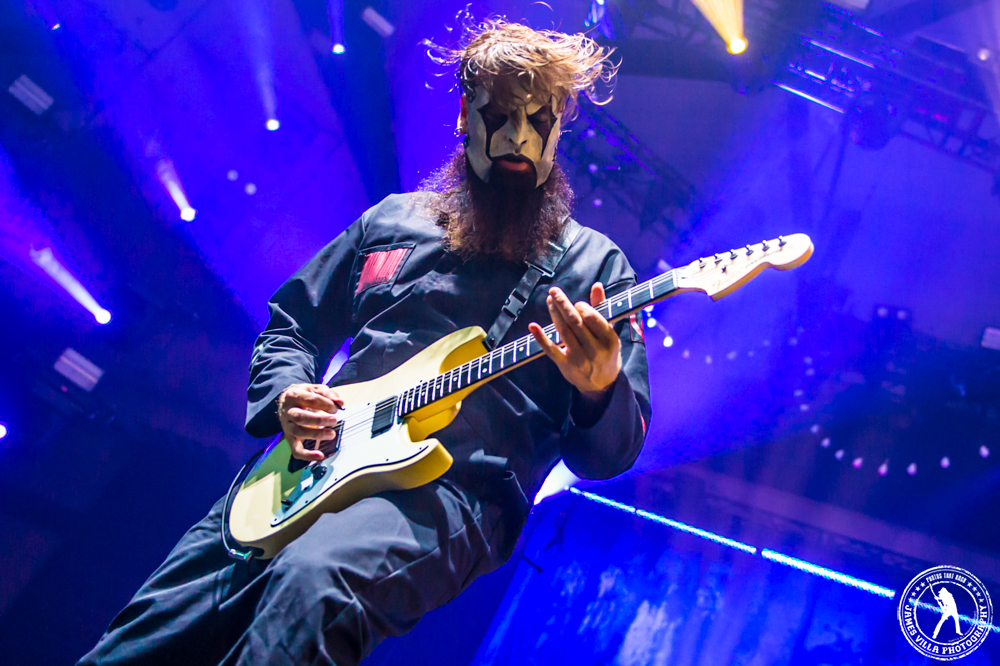 “AOV” was another song they did form the newest album, not all of the audience knowing it by heart, though they still enjoyed the aggressive sound it has, being pure Slipknot. On the other hand, “Killpop” found a large portion of the onlookers singing with Taylor, that one being one of the tightest of the performance.

Still, it was songs like “Before I Forget” and “Duality” that were clear fan favorites, the audience taking over at times on those two staple songs that never cease to amaze. “Custer” has also risen to be a hit song with their fans, eventually closing out what had been a nearly hour and a half long set, and there was still the encore to go.

With that encore, they treated the excited fans to mostly older material, going back to their self-titled debut, “Surfacing” being used as the closer. A mosh-pit or two could be seen out on the lawn, while everyone else looked on towards the stage, screaming right along to every word.

It was as epic a night as everyone had expected, Slipknot solidifying that they are kings of the live performance, having a level of stamina that’s possibly unrivaled. With the masks and the clothing (some members shirts being long-sleeved and just bulky looking) it has to be hot, making an outdoor show like this, in Texas where it’s ninety plus degrees, all the more difficult. It never really appeared that way though, the 9-piece outfit completely owning it every second they had the stage.

There’s no band quite like them and it will be interesting to see what comes next for them. Surely more large-scale touring lies ahead, at least in 2016. We’ll see, but for now, they at least have another Knotfest on the horizon as well as an appearance at the Aftershock Music Festival, both in late October.