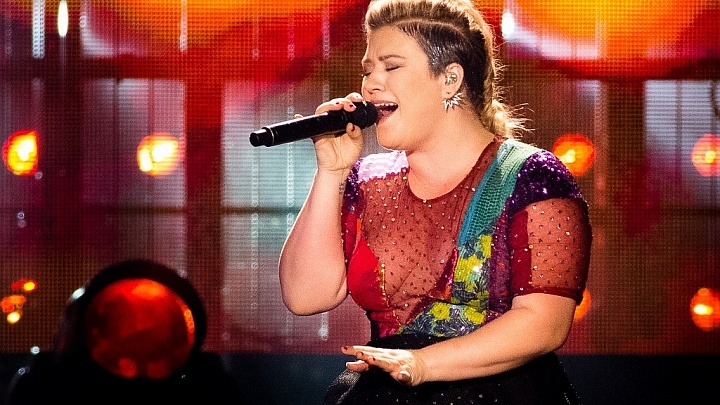 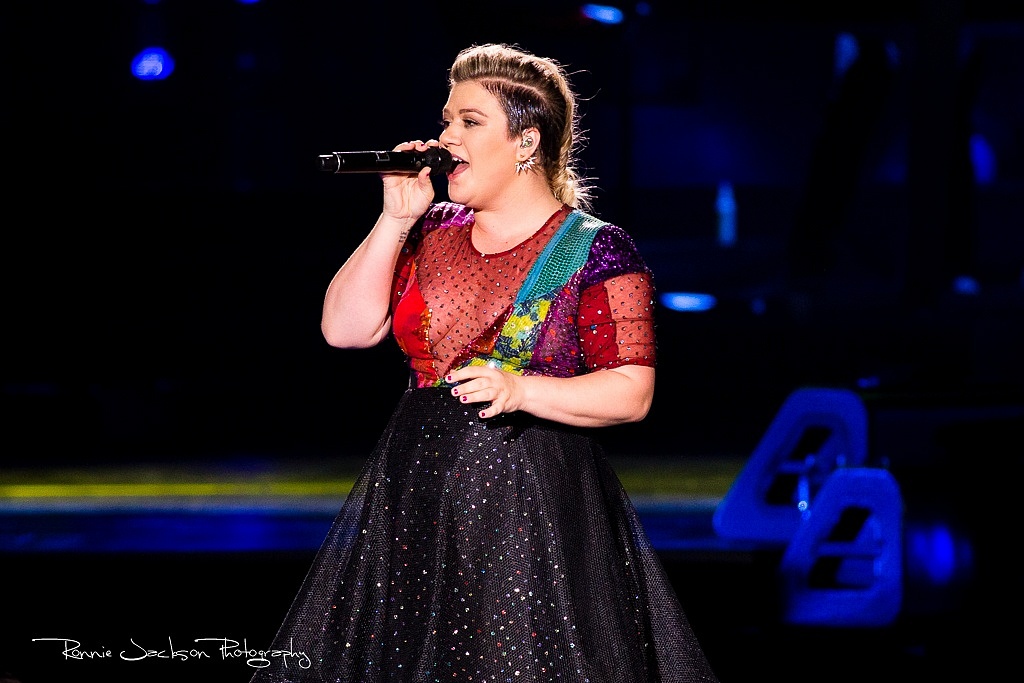 When you think about it, few people have managed to parlay their time on a singing competition or some sort of talent-based reality show into an actual career. Most winners are forgotten pretty quickly, sometime after they release their first album, when the hype begins to die down. Only a handful of people from that category have ascended the ranks to being a household name and are still relevant to this day. This night, it was abundantly clear that Kelly Clarkson was one of those elite.

This hometown show of her Piece by Piece Tour (at least as close as she got to her hometown of Burleson, just south of Fort Worth) was the place to be on this Sunday night. Traffic was backed up for a couple miles as I made my way to Gexa Energy Pavilion, the sprawling parking lots adjacent to the venue being largely full as people continued pouring in. It was something to see, especially since it was still so early, being just a little after seven when I (finally) arrived.

The myriad of concertgoers seemed to enjoy all of the opening acts, Pentatonix being a highlight for all (another example of reality show winners who have managed to become a sensation), though Clarkson was clearly the reason everyone had turned out. That was evident by the massive fanfare that erupted once the lights went down at 9:30.

Clarkson appeared from what at the time was a small opening from a wall of sorts that had the rest of the stage shielded. They served as video screens as well as having a mirror texture about them, often reflecting the lights this night, too. The structure (which was several panels that fit together) slowly slid along the sides of the stage, becoming a backdrop, though few people were focused on that. All eyes were on Clarkson, who had made her way out to a platform placed in the middle of the crowd; “Dance With Me” instantly setting the tone for the night. “Come on and dance with me!” sang Clarkson, the crowd doing much of that throughout the near hour and a half that she would have the stage. 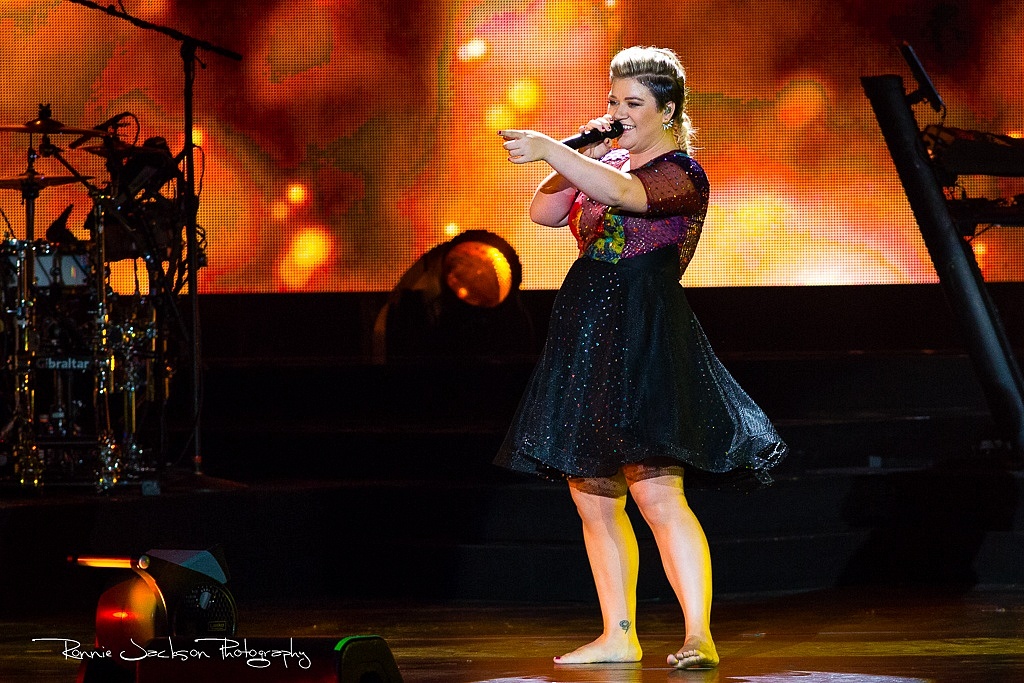 The most appealing thing about this show was the fact that while Clarkson may hold the status of a superstar, she never acted it, at least not in terms of personal demeanor, instead seeming like an average person, no different from anyone else there this night. The first instance (and there were many) came before the third song, when, among other things, she mentioned she hadn’t toured in a few years, graciously thanking everyone who had shown up this day, saying because of the longer absence she didn’t know if anyone would show up or not. She legitimately seemed surprised and pleased that people had.

The show was a pretty good mix of new songs along with the classics everyone wanted to hear. Of course, several fans knew many of the new songs by heart, ones like “Nostalgic” for instance, which was an absolutely stunning track that showcased Clarkson’s pipes better than almost every other song this night. That’s saying something.

“Invincible” was one new one that earned a strong reaction from the spectators, given it is the latest single from Piece by Piece, that song leading into one of the most touching moments of the night, another moment where Clarkson demonstrated that she was human, no different than anyone else.

A piano was brought out to the stage as they slowed things down for a bit. She noted they would be doing the title track of this new album differently from the album version, the idea being that of her producer’s, who was also playing the piano this night. Right off the bat she stressed she would not be able to get through the tune about her past, growing up without a decent father and the abandonment issues him leaving caused to finding a spouse who taught her to trust men again.

Even during that dialogue she choked up, while the song itself found her becoming overwhelmed, stopping and sobbing for a second or two before picking it back up from where her emotions got the best of her. She apologized profusely, though it wasn’t necessary. Everyone there seemed just as moved by the song, even if not everyone could relate personally, cheering and applauding Clarkson to encourage her when she needed it.

“It’s not going to get happier!” she exclaimed after composing herself, “Because of You” being part of a little medley that they did. She promised not to cry anymore as they carried on, the rest of the set being much more upbeat, the classic from 2004’s Breakaway, “Behind These Hazel Eyes” being a truly explosive song that proved there weren’t going to be any more teary moments. 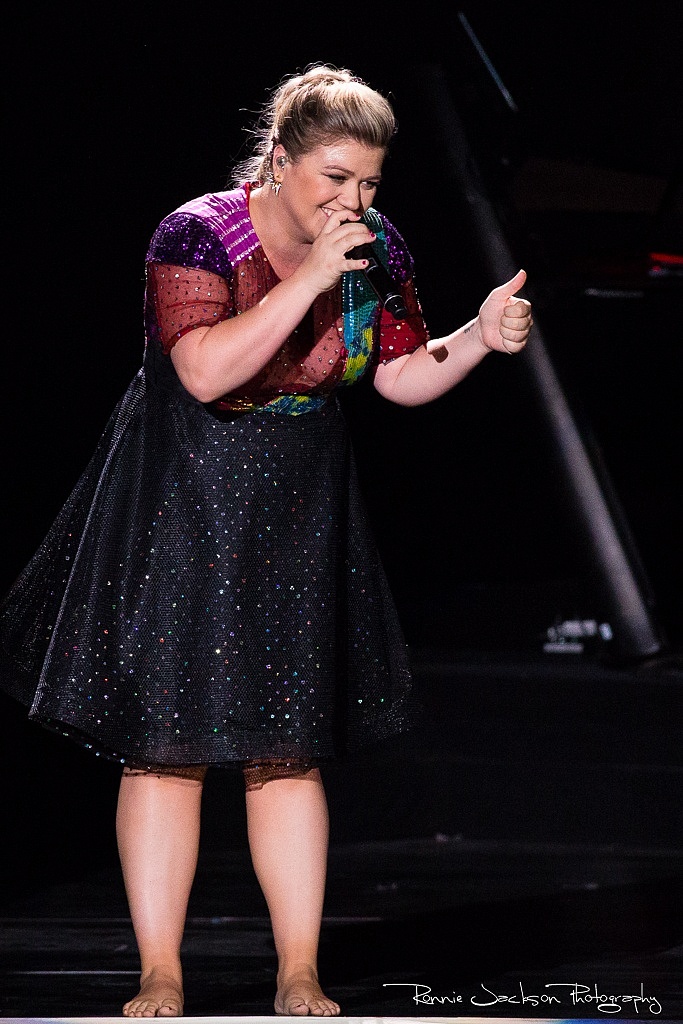 The rest of the night (at least here and there) featured a few different vocalists entering the mix, from a young man who had won a contest Clarkson is doing for every city on this current tour, essentially turning the stage into an open mic for the lucky winner. Clarkson’s band backed him up on the cover he chose to do, while Pentatonix joined Clarkson in singing “Heartbeat Song”. Her band consisted of three talented backing vocalists, all of them becoming just as prominent as Clarkson during the closer of “Walk Away” which was mashed up with a cover of “Uptown Funk”, Clarkson and company giving a real spark of life to the repetitive track before marching off stage.

There would be an encore, three more songs, the final one being the one most everyone had been waiting for, “Since U Been Gone”, which sounded ultra fiery.

Going into this, I wasn’t all that familiar with Clarkson’s music, aside from the radio singles. I’ve just never invested the time in listening to any of her records in their entirety. After this show, I found myself wondering why.

Everything sounded great in its own way, from the ballads, to the poignant tales and the rock/pop numbers, each offered something different for the listener to take in. Clarkson was very into the performance, jumping at times or wandering about the stage at others, gazing out at everyone she could. All the while she was putting everything she had into it. That was obvious, that she wasn’t holding anything back. Let’s not forget she recently just announced she’s pregnant with her second child, which can’t make a rigorous show like this any easier.

Her outgoing and friendly personality made the show all the more enjoyable, like she truly wanted to converse with everyone who was there, even if it was mainly a one-sided conversation. Kind, humble and a class act for every single second she was out there. That made me like her all the more, adding a whole other layer to the already excellent songs in her catalog.