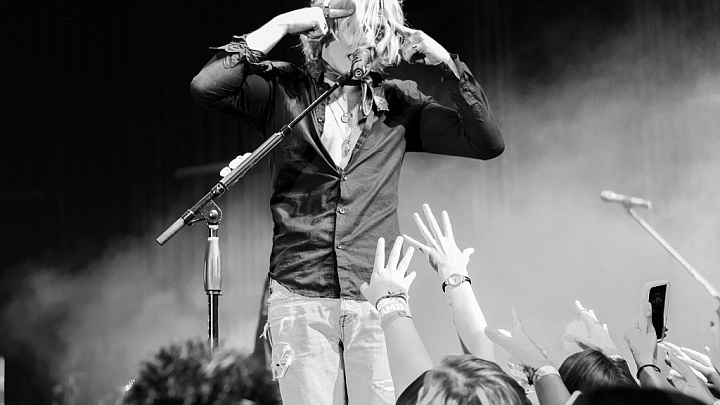 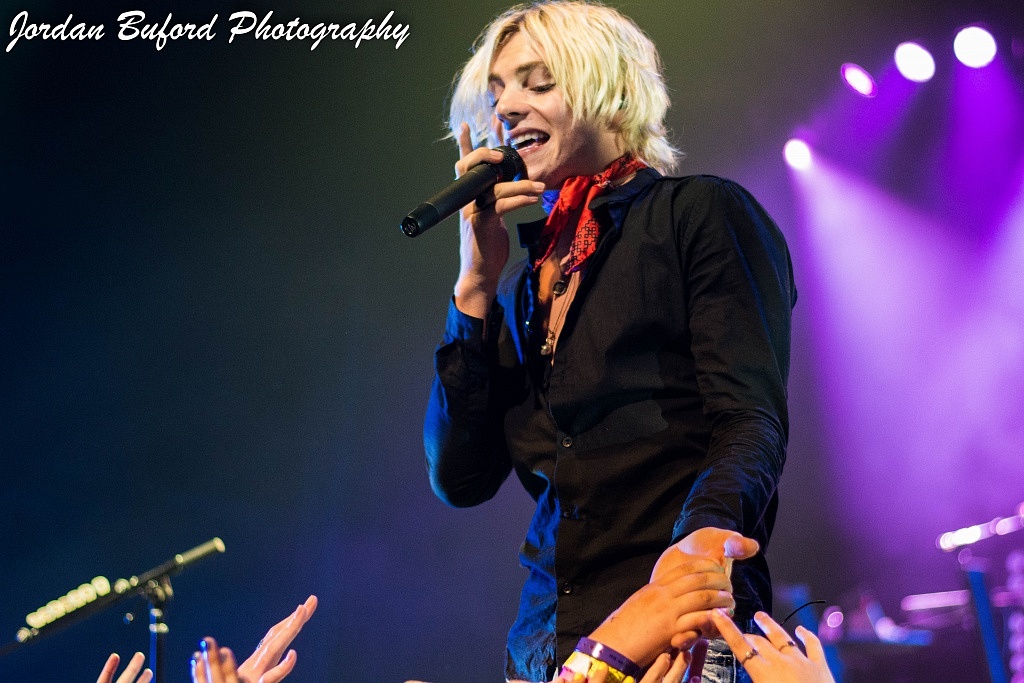 Was I bit out of my element this Sunday night? Probably.

From the outside, Verizon Theatre didn’t look too lively yet as I pulled into the parking lot just a few minutes after six (the time the doors opened). Once I stepped inside, it was a much different atmosphere. Contrary to how the parking lots looked, the venue was bustling with life, and more patrons were pouring in each second. The youngest kids I saw in attendance were probably around five or so, with others having around a decade on them. Tweens were clustered around the floor of the foyer, chatting with their friends, many wearing lanyards from a meet and greet they had done with the band everyone was here to see, R5. The line at the merch table was staggering, fans walking away holding their new shirts up and looking at them proudly.

Nearly all of the kids (save some of the oldest teens) were accompanied by their parents, some of whom even seemed a bit excited themselves about the concert they were in for.

Me, I knew next to nothing about R5, except that they were a sibling band (with the exception of their drummer) who had released their second LP just a few weeks before this show, their tour in support of Sometime Last Night now leading them to the Dallas/Fort Worth area.

To sum up, I made up what was a very small fraction of male patrons this night and I was one of a small handful (if not only) male in his twenties. So, yeah, I was out of my element, but hey, it’s good to get out of your comfort zone every now and then, especially when it comes to attending/covering shows. 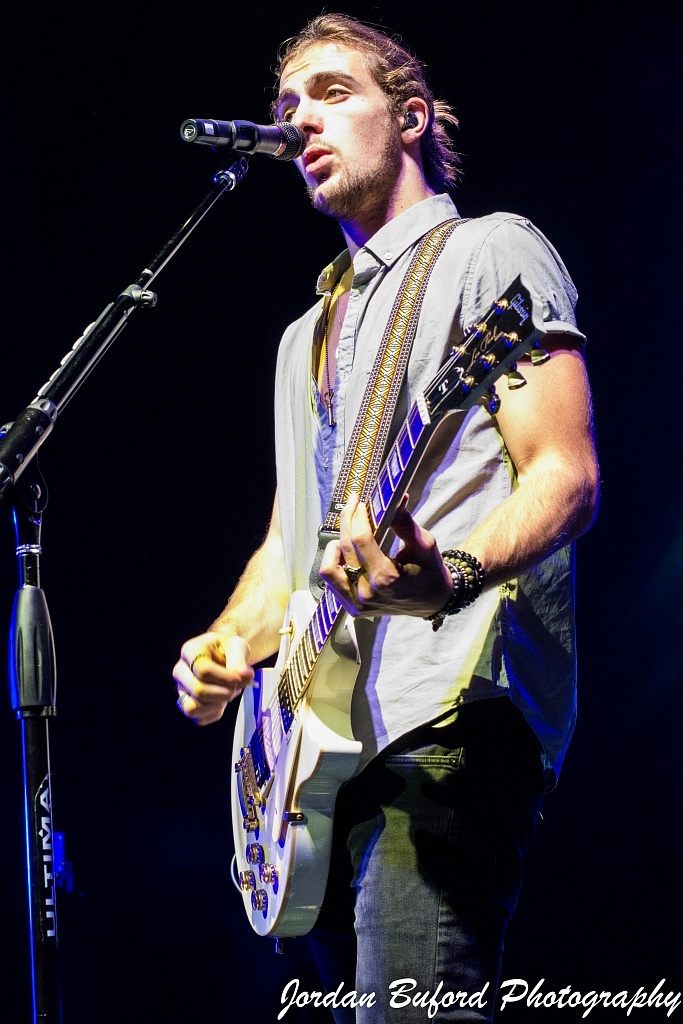 The two opening acts, DJ Ryland (Ryland Lynch, brother of four-fifths of R5’s members) and Jacob Whitesides delivered excellent sets, sparking the crowds’ interest and warming them up for what was to come. The patrons were just giddy about the whole night, and it was definitely obvious the feeling was only mounting the closer it got to R5’s show time, numerous signs being held up in the crowd, saying things like “Ross U Rock” with hearts drawn around the lettering.

Fittingly, “We Are Family” played over the PA, signaling it was nearly time as the curtain that covered much of the stage lit up with different bands of colors, resembling the cover of Sometime Last Night. Soon, you saw the silhouettes of some of the members appear, the curtain soon dropping to reveal the five of them.

Part of their stage setup was a large platform, a ramp leading up to it from the stage floor. Drummer Ellington Ratliff was on the stage left side of it, Rydel Lynch and her keyboard being opposite of it. Riker, Ross and Rocky Lynch were also up there at first, soon descending upon the stage as “All Night” fully kicked in.

Ross (who was the primary singer) went from singing into the mic, to removing it from the stand and racing about the stage, all during the course of that number that had plenty of people singing along. He even bent down at times, the girls in attendance reaching up, trying just to touch his hand (or even hair). 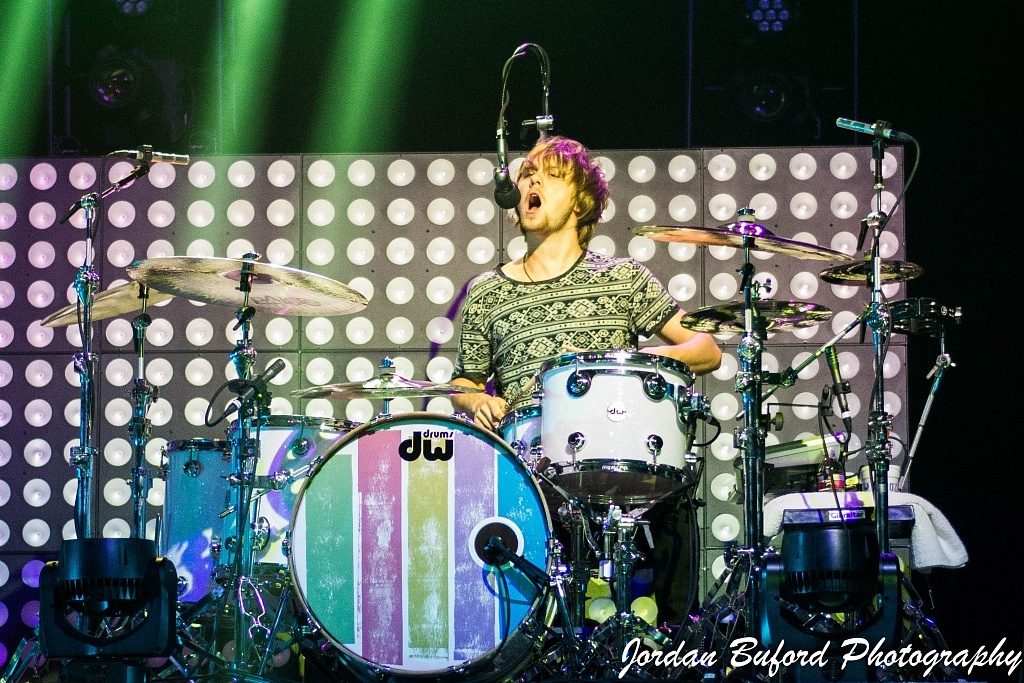 He added rhythm guitarist to his job description on the second song, using the axe often this night; and before the third number, he asked the few thousand people there if they had come to have a good time. They sure had, based on the deafening response. “We did the same!” he remarked as they kept the new material coming with “Let’s Not Be Alone Tonight”, a song that definitely has its pop qualities, though hit with some force, thanks to a heavy rhythm section.

“Cali Girls” was a favorite of the night, drawing from the Louder album, the poppy style being perfect for some dancing, as even those standing from their seats moved around to some extent. The people also went crazy when one of the lines was changed to “Texas girls”.

This night wasn’t entirely originals (though that was the majority of what they did), a couple covers finding their way into the mix, “Blank Space” being one. It seems a safe bet that everyone here was also a fan of Taylor Swift, so hearing R5 cover one of the newest songs from Swift made it all the more heavenly for them (and the band did a solid cover of it as well).

They performed that more as an acoustic song, doing more or less the same with the follow-up, “Loud”. Hearing it really pleased the fans, who sang along to much of it.

By that point, they were on a tear, knocking out songs left and right, “I Know You Got Away” being one of them, powering through some technical issues with Ross’ guitar, he and Rocky soon jamming during a duel solo. After another song, Rydel suddenly sprang into action, leaving her station behind the keyboards, grabbing her microphone as she trekked down the ramp onto the stage. She had been providing some backing vocals all night long, but on “Lightning Strikes”, she took over on lead, showing off what a stunning set of pipes she possesses, captivating everyone’s attention. 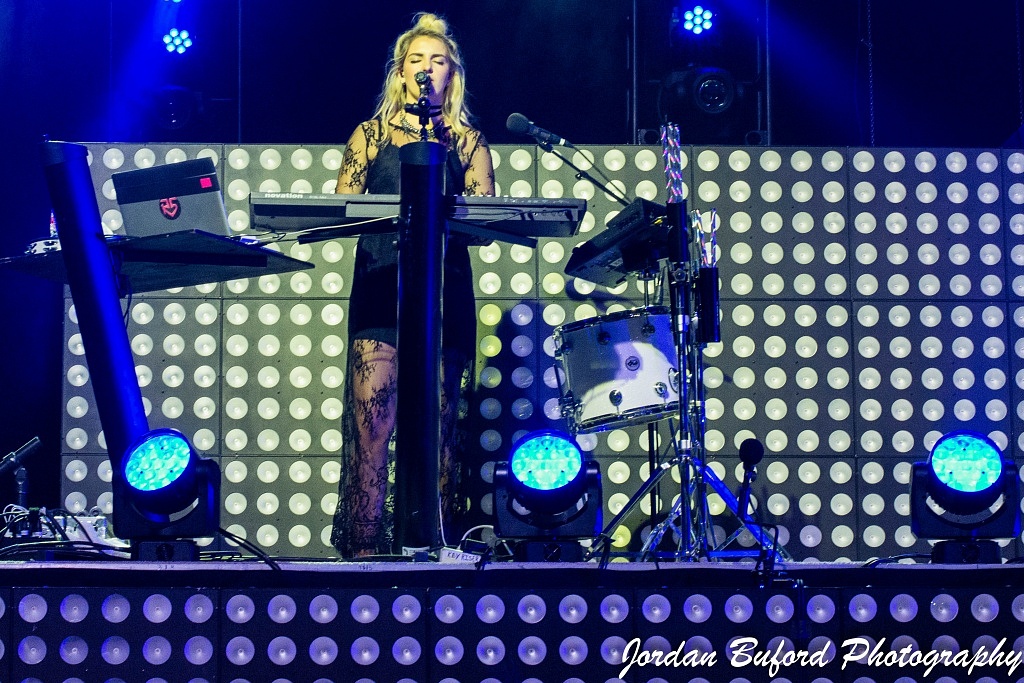 Lady Gaga’s “You and I” was the other cover they mixed in (being performed almost entirely solo by Ross on a keyboard); and they continued mixing in some older and new songs, before the nearly 90-minute long set culminated with “Smile”, the first single they released off their latest album. The attendees were doing more than that, some of the younger ones cheering with delight at the start of it.

The five of them disappeared into the wings of the stage, the fanfare growing louder, first applauding them for their work, though it transitioned into demanding an encore. R5 obliged, reclaiming the stage for one final song, “Wild Hearts”. “…And I know this, we better live our lives up to the fullest, ‘til we’re the only ones left standing!” roared Ross, Riker, Rocky, Rydel and Ratliff then jumping in to help sing on the chorus; that song leaving the predominantly young concertgoers satisfied and seemed to be a perfect ending to the show.

It’s safe to say that a 26-year-old man is not the kind of audience R5 is making music for or trying to appeal to; though from hearing the stuff on their new record both live this night and listening to it online, they clearly are trying to mature as a band, and doing it successfully at that. The new jams retain plenty of pop elements, though have plentiful doses of rock mixed in. Actually, the moments where they were just rocking on their instruments, letting the full potential of their musicianship shine, were often the best parts the show, at least in my opinion.

That’s not meant to undercut their voices either. Each did their fair share of singing (be it backing or lead), all having a strikingly strong voice; each one complementing the others during the times they were all singing.

I may not be the target audience, though that doesn’t mean I didn’t enjoy the show. The showmanship was solid, the energy they exuded being appropriate of this spacious setting; and they have some really nice components going on. I’m curious on how they’ll progress, if their style of music will continue maturing as they do. Time will tell on that front.