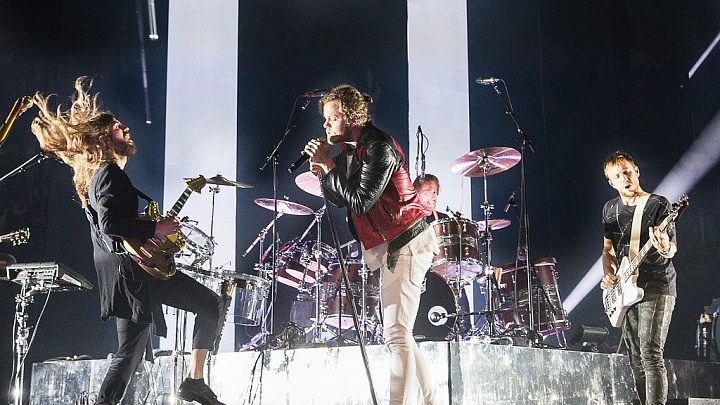 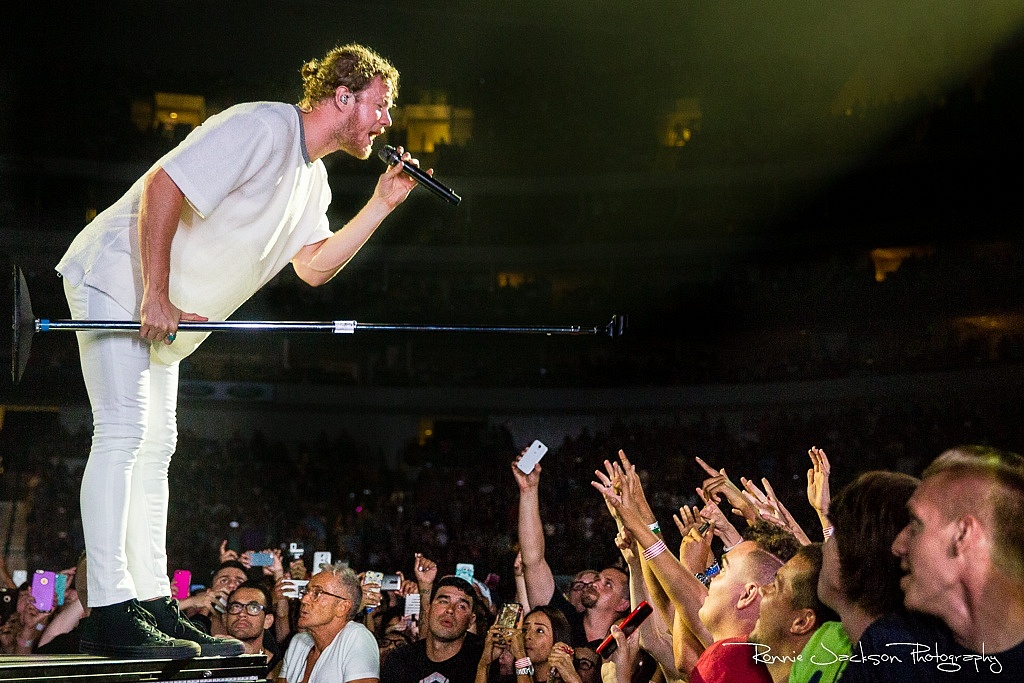 There was no hotter ticket this night than Imagine Dragons at American Airlines Center. If you lived anywhere in the DFW area, then it was surely the show you were either at or the one you saw your friends checking in at on social media and wished you could be there.

It been a little more than a year since the band who rather quickly cemented themselves a sensation were last in Dallas, now returning in support of their second full-length record, and they weren’t alone.

Metric is joining them on this tour and with well more than a decade under their belt, the Canadian indie rock band had plenty of fans out this night as well. 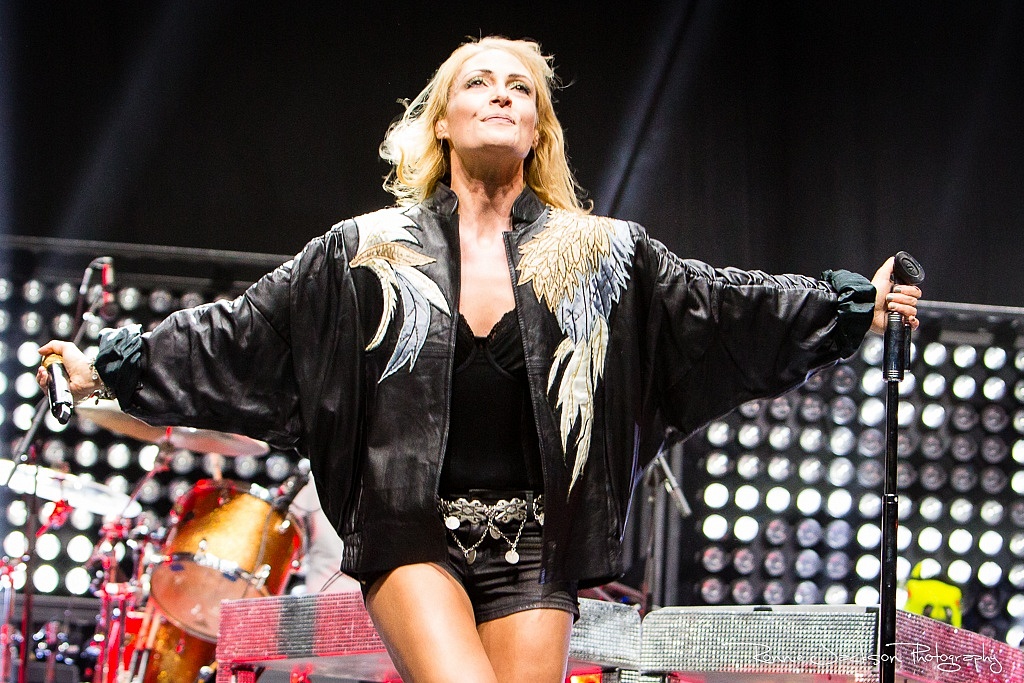 With their new album, Pagans in Vegas, due out later this year, the four-piece played a few offerings from it, like their second song of the night, “Too Bad, So Sad”. With the commanding presence they stormed the stage with, you found yourself at times forgetting they weren’t the reason everyone was gathered here this night. Emily Haines was pulling in all the onlookers, running in place at times on that aforementioned song, while she knelt at the end of the stage—which resembled a triangle, coming to a point at the front—during “Black Sheep”, which perfectly combined the electronic/synth elements with some full-blown rock sounds.

They were inspirational, encouraging everyone to find what they love to do and do it, no matter how daunting things seem. Haines used themselves as an example, still making independent music and were asked to join Imagine Dragons on this massive arena tour. One of the singles from 2009’s Fantasies, “Gold, Guns, Girls”, was arguably the best song of their set. At least everyone knew it, even people whom I heard exclaim afterwards they had heard the song, though didn’t know who did it until this moment, seeing Haines, guitarist James Shaw, bassist Joshua Winstead and drummer Joules Scott-Key cranking it out.

“The Shade”, the first single released from the upcoming new record, concluded their 9-song set a set that had been explosive and equally visually stimulating. Their lengthy career has afforded them time to develop the perfect chemistry—at least for them—delivering a fun yet intense show that was accented by the often moody looking lighting. 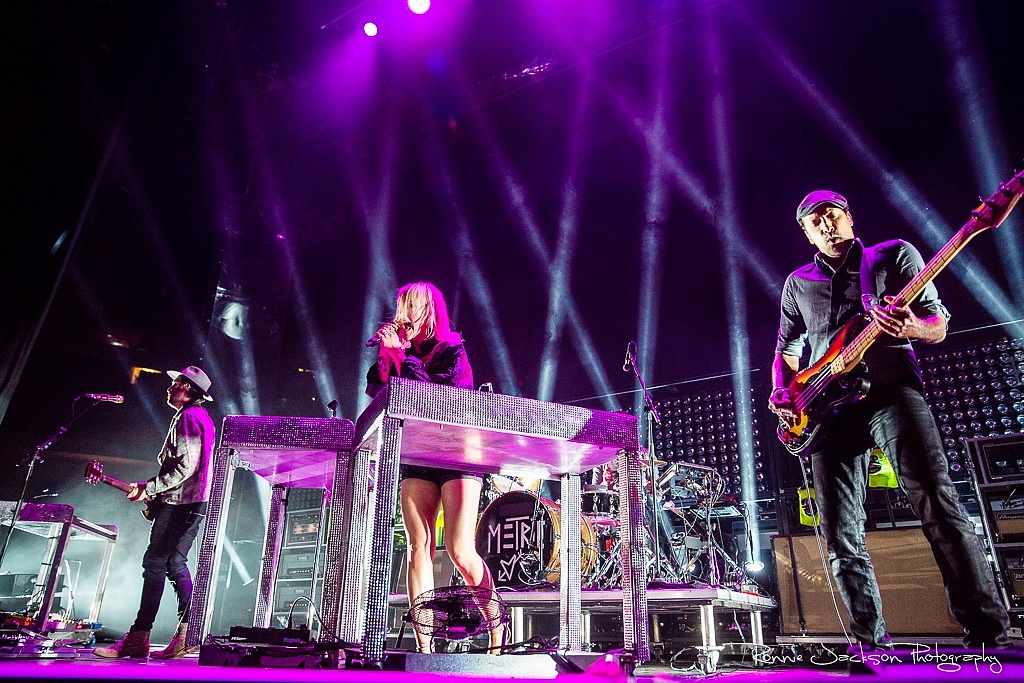 Putting all those aspects together, it gave their performance a nice aura, leaving the masses talking… and that was merely the warm-up for what was to come.

Admittedly, unlike much of the nation (or even world), I was never swept off my feet by “Radioactive”, nor have I even been anything that constitutes as a fan of Imagine Dragons. I was the odd man out here at AAC this night, that goes without question, though there was no way I could turn down the opportunity to see the superstar group and I was curious if seeing them live would sway me to be a fan.

A little more than a quarter after nine, they got to work.

A large curtain had descended after Metric’s set, shielding the stage from sight; and when it came time for ID to hit the stage, a series of lights flashed on it, both from the front and the back. You saw the silhouettes of some of the musicians, adding to the grand feeling of excitement as people anxiously waited to see one of their favorite acts. It wasn’t long and the curtain dropped; vocalist Dan Reynolds almost immediately heading to the platform that was out more in the crowd, a walkway connecting it to the stage. Those down on the floor were going crazy over that, loving the fact that he spent the majority of their near 100-minute long set out there, wanting to be as close to the audience as possible.

This was the Smoke and Mirrors Tour, and that album was the primary focus this night as they kicked the night off with the lead track on it, “Shots”. The patrons were already quite familiar with Smoke + Mirrors, having had exactly five months to listen to it. It was actually amazing to see, the way they all reacted to these songs, like the second one, cheering as soon as “Trouble” took shape; the harmonies Reynolds, lead guitarist Daniel Wayne Sermon and bassist Ben McKee struck up sounding absolutely stunning, leaving people in awe. 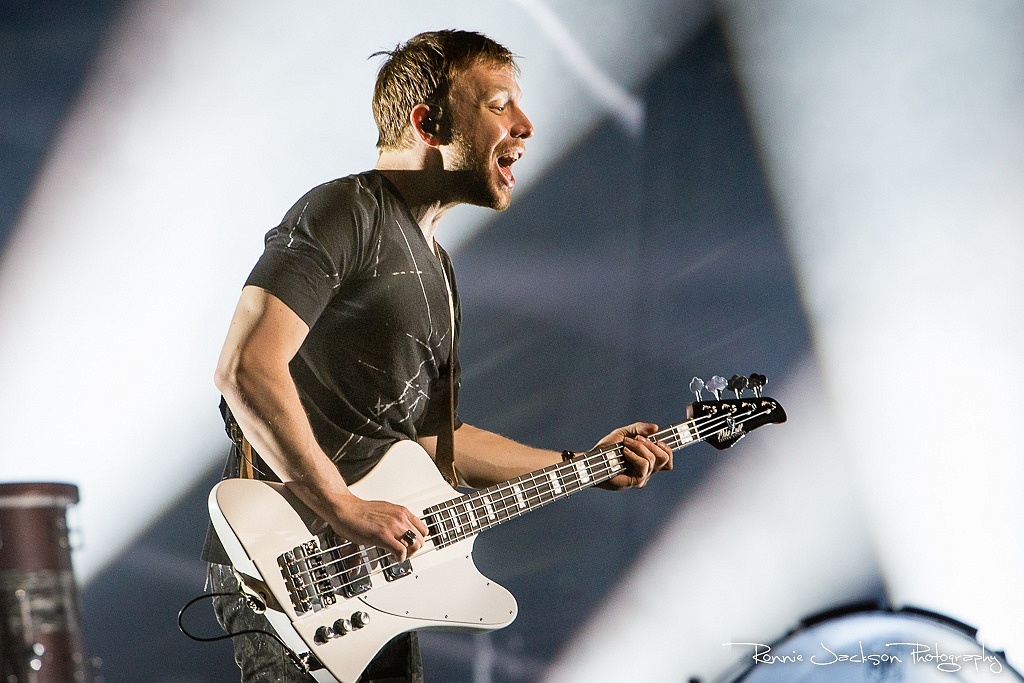 Early on, the frontman commented on all of this. The playing arenas to thousands and thousands of fans, everyone knowing their music and coming there to hear it, even recalling their first Dallas shows which was “much, much smaller”. He seemed almost dumbfounded by it all, saying he didn’t think he would ever really get used to it, that speech making for a good transition into the first of a few older songs that would be heard this night, “It’s Time”. The lungs of practically every member of the crowd were put to the test on that one, and they did not disappoint the guys in Imagine Dragons.

They did throw in one cover this night, Alphaville’s timeless classic “Forever Young” belonging almost exclusively to Reynolds who sang it with just some subtle synth sounds backing him, a sea of phones going up in the air. I guess people these days are more apt to have a cell phone on them instead of a lighter.

With each passing song, the band was only getting more into it. After half a dozen or so, you could tell they were finding their groove, hitting even harder. Take “I’m So Sorry” for instance. It was brutal in some regards, the performance given during it being totally raw, primal even. It was mesmerizing. 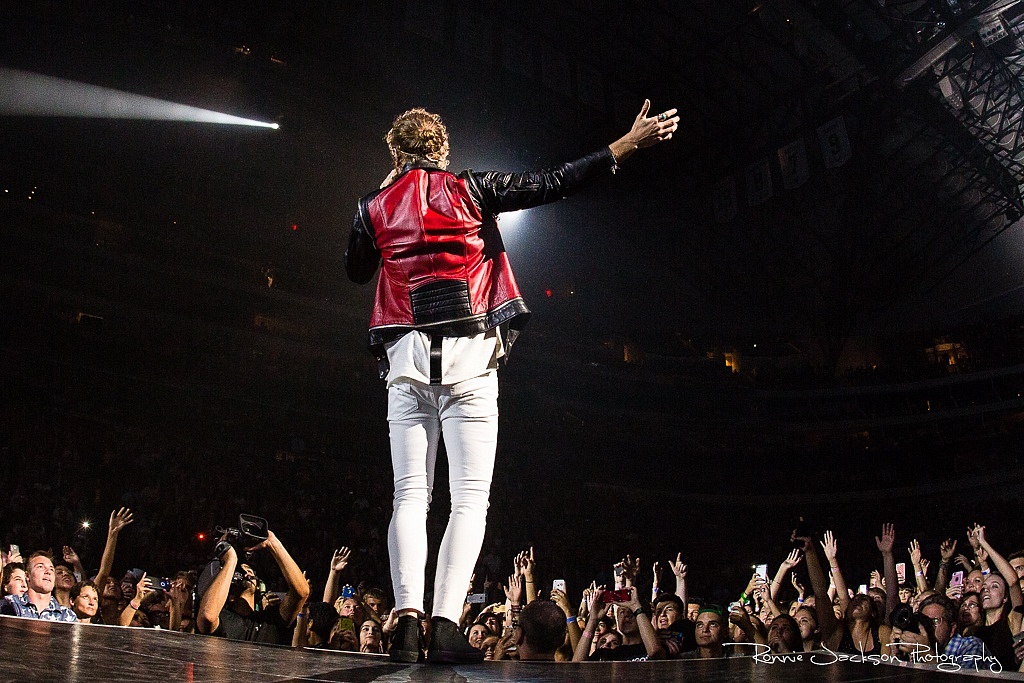 Later on “Bleeding Out”, “Warriors” and “Demons” were all done as a sort of medley, doing portions of each, keeping it all relatively relaxed, more along the tempo of the opening of that final mentioned song. It was an interesting way to do it all and came to a climatic finish. That was a neat way to change things up, though they shook them up even more with “Amsterdam” a couple of songs later. The song was performed acoustic, just Reynolds and Sermon. The crowd liked it; and after a few minutes, seeming completely spontaneous, Reynolds suggested they play the “real” song. “I don’t even remember the last time we did it [this way],” he said, a smile on his face and a hint of glee in his voice. The full band on stage, they played the song once again, giving the crowd two different perspectives of it.

The pinnacle moment of the night quite possibly came during “Friction” a host of red lasers creating a “wall” so to speak along the front of the stage. More like bars on a cell might be a better explanation; the band launching an all-out assault during the behemoth number and one that will hopefully stick around for many years and tours to come.

The night nearly over, they had saved the biggest hits for last. The sing along “I Bet My Life” and “Radioactive” (which became a sing along) rounding out the set, with a lone encore coming after the spectators coaxed the band back out. 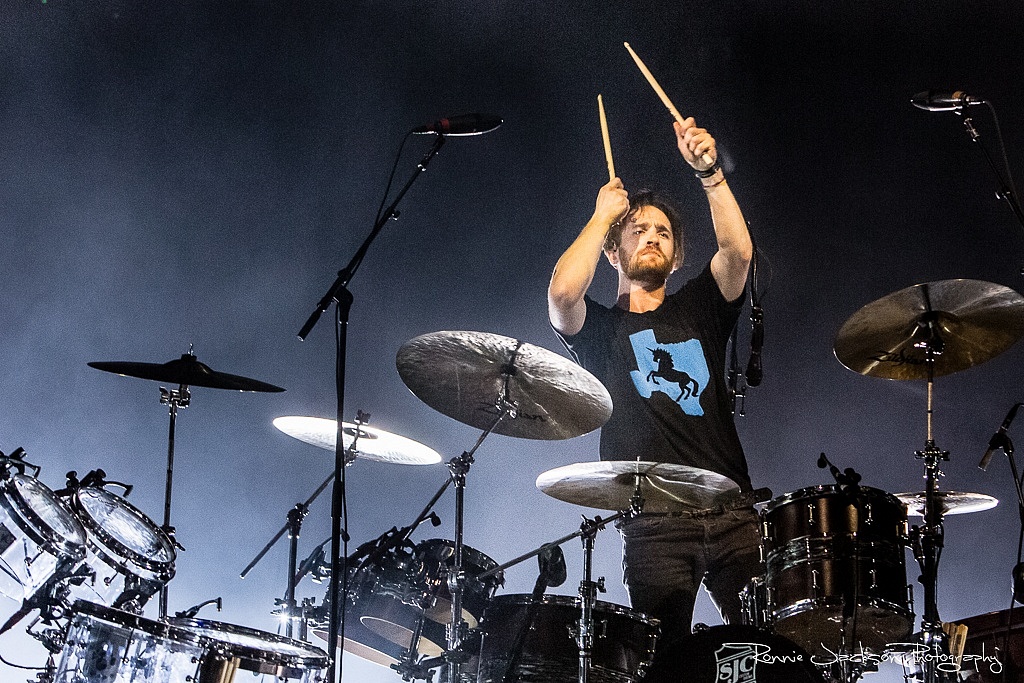 I don’t know what was more impressive to me this night. There were a few different things, though I’ll start with the fact that this show was all about the fans, appeasing them by giving the best performance possible. They truly did love and appreciate every single person who had come out this night, Reynolds even venturing off stage during one song, making his way out of the pit that surrounded the stage, through some of the crowd members on the floor and then up an aisle, grabbing the hands of everyone who stuck them out.

It’s always nice to see artists, especially at this level, who remember their fans are the entire reason they’re where they’re at, and that’s something the guys in Imagine Dragons have not forgotten. 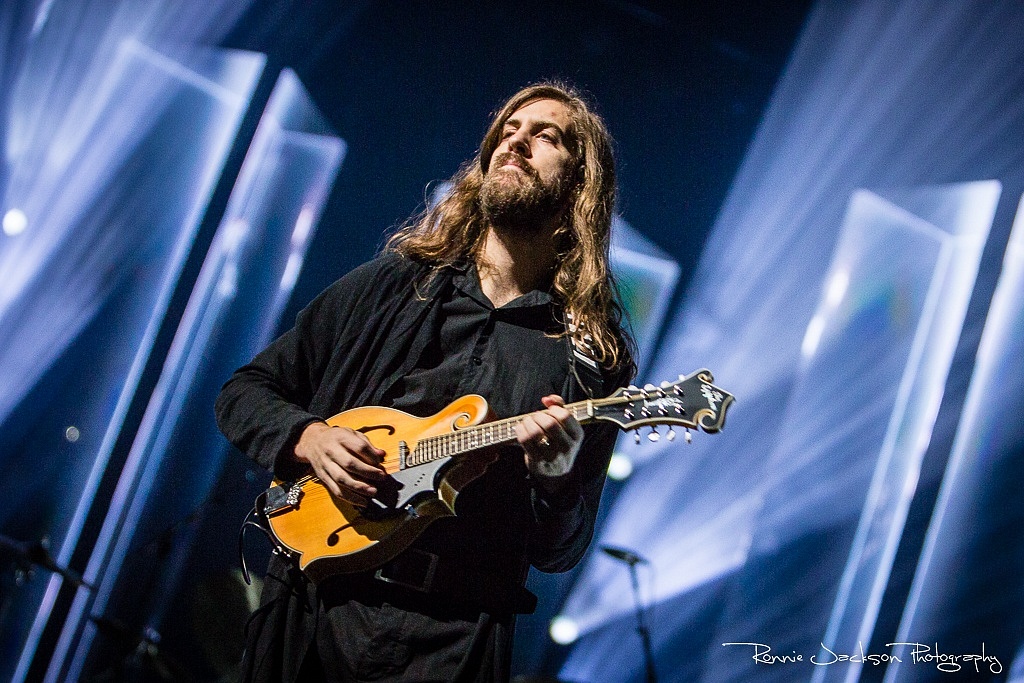 Aside from that, the performance was definitely one to behold. Some bands are better admired in a club setting; I’ve seen others that are quite popular yet presence wise have trouble commanding a room of a thousand. As for Imagine Dragons, they handle the arena setting with absolute ease. A lot of finesse went into their performance, as they made sure to put forth the strongest, most crowd pleasing production that they could muster.

I may not have been a fan these last few years, though it’s pretty hard not to know some things about Imagine Dragons; and I was pretty surprised that they moved up to playing arenas so quickly (at least from the time they first found mainstream success). Seeing them this night, I found out firsthand they are more than capable of handling themselves in such a spacious environment. It’s what Imagine Dragons was built for; and yes, as I left AAC, I found myself having been converted into a fan of the group. They said they’d be back next year. For many, that can’t come soon enough.