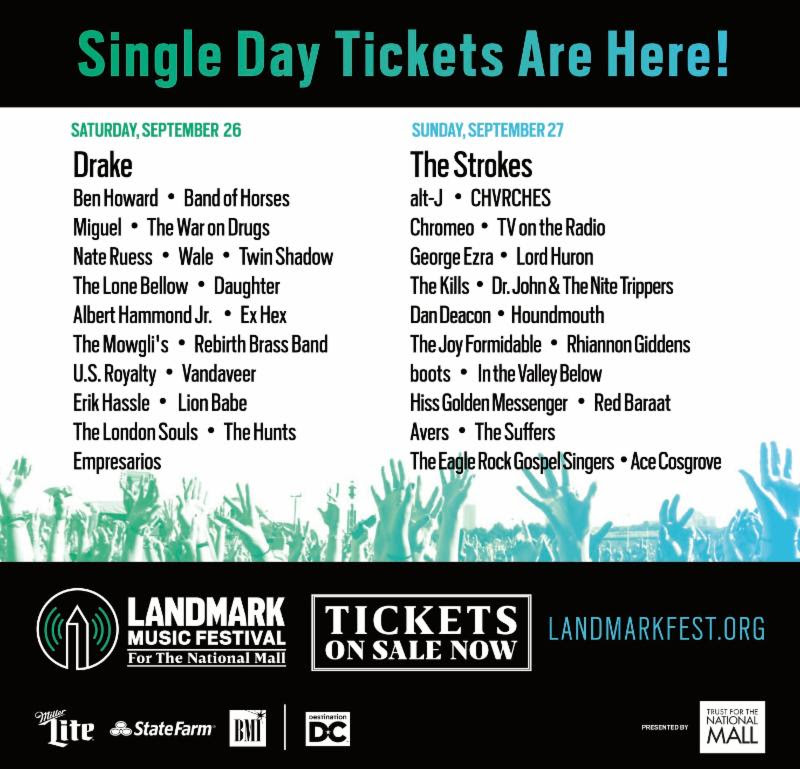 The lineup by day for Landmark Music Festival has been unveiled, revealing Grammy-award winning rapper Drake as Saturday night’s headliner and celebrated rock band The Strokes as the festival closers on Sunday. Ben Howard, Band of Horses, Miguel, The War on Drugs, Nate Ruess, Wale and more will light up the stages on Saturday, while Sunday brings exciting performances from alt-J, CHVRCHES, Chromeo, TV on the Radio, George Ezra, Lord Huron and many others.

Single-Day Passes will be available for $105 beginning today at 10am ET at www.landmarkfestival.org. Early Bird 2-Day Passes are still available for $150, along with VIP, Platinum and Travel Packages. Landmark Music Festival is family-friendly, and kids 10 and under will enter for free with a ticketed adult.

Award-winning Chef José Andrés will partner with Landmark Music Festival to curate the festival food court, hand-selecting all of the culinary vendors for this year’s event. In addition, the chef will be presenting his own delicious fare for patrons to enjoy. The range of food offered during the festival will reflect the melting pot nature of American cuisine as well as the great culinary diversity of Washington, D.C.

The world-class festival will take place at West Potomac Park in Washington, D.C. on September 26-27, featuring 40+ artists on 5 stages, a mini-festival for kids, interactive installations, educational elements, and fantastic culinary options representing a taste of the District.   In partnership with the Trust for the National Mall, Landmark Music Festival will be the first event held to support the Trust’s Landmark Campaign for the National Mall, which will establish various events and promotions to raise awareness, participation and fundraising to restore the most visited national park in America, the National Mall.