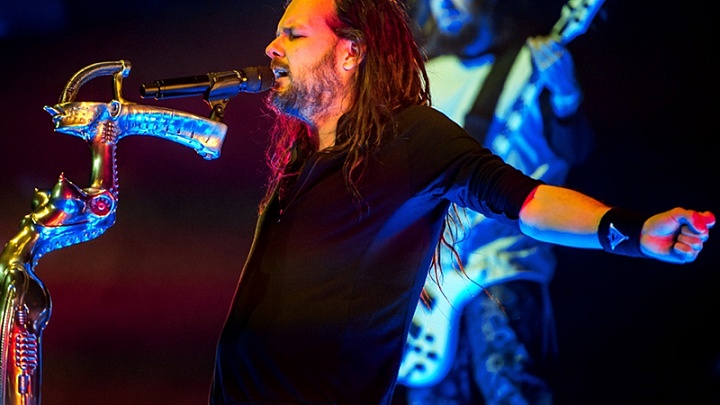 with Suicide Silence and Islander

*** Tickets on sale Saturday, July 25 at 10am ***
KORN CLOSES OUT 20th ANNIVERSARY CELEBRATIONS WITH HEADLINING TOUR THIS OCTOBER 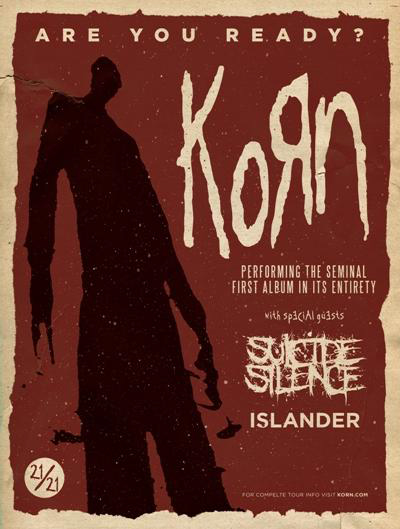 Grammy Award-winning multi-platinum hard rock innovators KORN are topping off their 20th anniversary celebrations with something special for their fans. Today (July 21), the band has announced they will head out on the road for one last turn in 2015 toperformtheirdebutalbumKORNinitsentirety. Thetourpre- sale starts today at 10:00 am local time on the band’s Facebook.

The 20th anniversary shows, which started in 2014, were so well- received that the band—Jonathan Davis (vocals), James “Munky” Shaffer (guitar), Brian “Head” Welch (guitar), Reginald “Fieldy” Arvizu (bass) and Ray Luzier (drums)–wanted to bring this iteration of the live show into an intimate setting for the core fanbase. Starting on October 1 at Aragon Ballroom in Chicago, the band will set out on a month-long tour around the U.S. to perform

the album that started it all at iconic venues including The Fillmore in Detroit, Irving Plaza in New York City, The Tabernacle in Atlanta, Stubbs in Austin and the Fox Theatre in Oakland, CA. At each show, fans will get to experience KORN two decades later and be able to request which songs from the band’s massive catalogue should make up the encore. Joining KORN on the tour are special guests Suicide Silence and Islander.

KORN’s self-titled debut album, which was released in May 1994, has been heralded by Rolling Stone as “the most important metal album of the last 20 years.” Produced by Ross Robinson, the critically acclaimed album featured singles “Blind,” “Shoots and Ladders,” “Clown” and “Need To.” With little mainstream support, Davis’ dark and disturbing lyrics alongside KORN’s new and unique hyper- aggressive soundtrack, KORN went on to sell over two million albums worldwide.