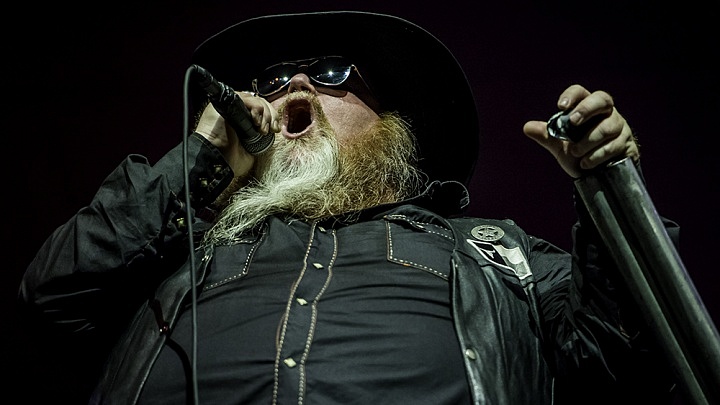 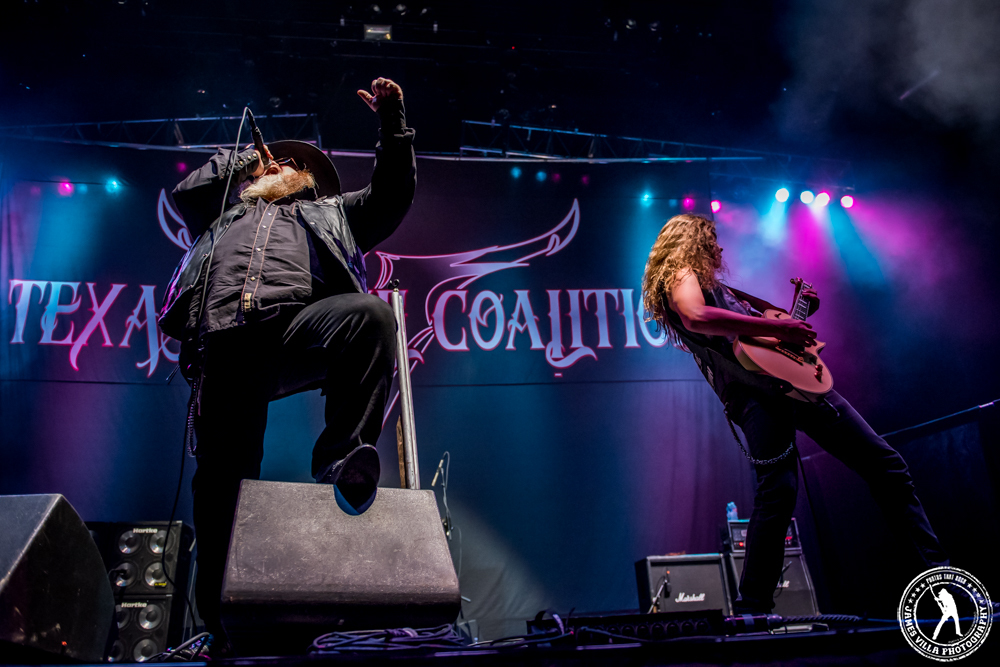 The Cedar Park Center in Cedar Park, Texas (it’s basically a suburb of Austin) was hosting an incredible show this Thursday night.

Metal legends Judas Priest was gracing the place, and while they were undeniably the biggest draw of the evening, they had a Lone Star State local opening for them. This was one of a small handful of dates the Denison-based Texas Hippie Coalition was doing where they would be sharing the stage with the icons, and based on their Facebook posts leading up to the event, they (THC) were quite ecstatic about it.

It was still relatively early, only 8:01, when they took the stage; the room that can accommodate a little more than eight thousand people being fairly sparse at the time; close to a thousand or so probably, scattered about the floor and the rows of seats.

The stage was bathed in a beautiful blue light as Timmy Braun took his seat behind his drum kit, John Exall following close behind as he marched out to stage right with his bass, guitarist Cord Pool doing the same on the other side. Big Dad Ritch wasn’t far behind; his custom mic stand (a well used shotgun with a bass and then a clip for the mic added to it) certainly getting some attention. “I’m the king of Texas, for those that don’t know me; and we’re the band of outlaws, call us THC…” the frontman sang in his low, gritty and booming voice as “Hands Up” got underway. The lead cut from the Peacemaker album quickly lets any newcomers know who they are. When he sang the chorus about getting your hands up, more than a few of the people listened; and Exall was in top shape from the get go, moving all over the place and even crouching, seemingly hugging his bass as he plucked the strings. 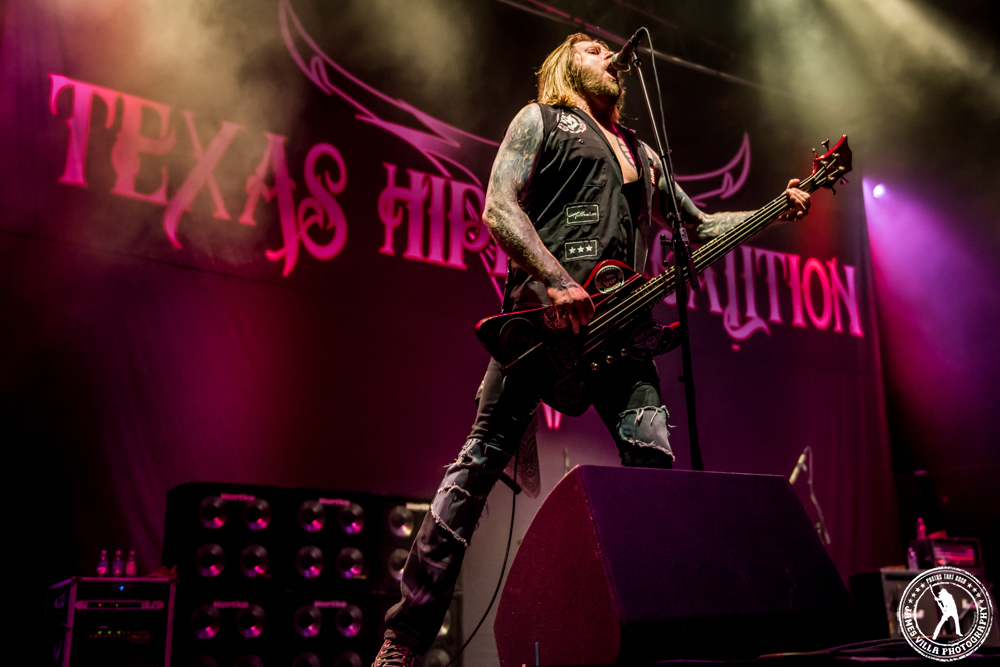 They rolled right into another track from that 2012 release, “8 Seconds”. Upon finishing it, Ritch addressed the spectators, mentioning if he had, had to, he would have paid good money to be here, noting what an exceptional bill this was, not because THC was on it, but because the Priest was in town. He then handed the reins over to Pool, who lit into his guitar at a lightning fast pace to get the next number going. He may be young, especially in comparison to the rest of the band, but his prowess on the axe exceeds many who know how to play.

They served up a few from their newest record, last year’s Ride On, with Ritch sharing stories in between them, from simply asking the audience who all had been “smoking weed and drinking liquor”, to getting a little more personal and speaking how as a kid, his dad usually had Willy or Waylon playing on the record player. So, as he got more into heavy metal, Ritch made clear he wanted to bring his country boy spirit into the genre. That was certainly clear based on the hat and boots he was sporting (and as he said later on this night, he wanted to wear all black, like Cash did.)

Before the title track from that new album, he again got personal, saying he had a hero growing up, calling him “dad”. He shared a minute’s long story, getting laughs from the onlookers—the majority of whom were caught up in it by this point—at the appropriate moments. It was during said track that Exall and Pool threw down, rocking out next to one another. 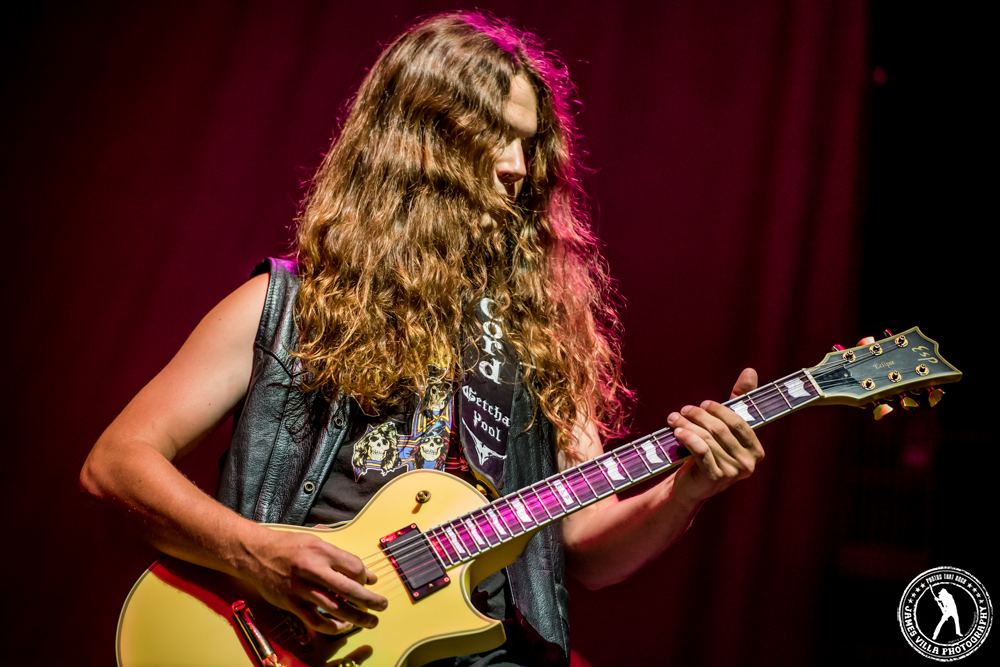 Ritch joked (or maybe it wasn’t a joke) that he had almost forgotten the words to that one, though he never sounded like he faltered. He delivered it all with conviction, so I don’t think many people would have noticed even if he had. “If you don’t know who I am, you need to ask your old lady, ‘cause she knows me,” he then cracked, an audible laugh filling the arena. He stated one lie after another had gotten them to where they were, sharing them, leading up to playing a festival last summer when he told the biggest lie he said he could think of, and that was that they would be opening for Judas Priest. Another conversation followed, one about being from Texas and not liking to bury bodies too close to the house, which makes El Paso (Hellpaso) a good spot to get rid of them. That setup “El Diablo Rojo”.

With a 58-minute set, they had time for a few more; and before it was all said and done, Ritch made clear he wanted to see everyone who had seen them this night back at their next Austin show, or he would hunt them down. He answered the question before anyone could ask it, that he may not know where anyone lives, “…But I can go to Wal-Mart and wait for ya.” The way in which he said it sounded more like a promise that he would then “stomp a mud hole” in the parking lot in the process of teaching them not to miss a THC show. With that, they wrapped with the oldest song they did this night, “Pissed Off & Mad About it”, a track that found him tapping his chest to the beats Braun was serving up at first, before grabbing that gun mic stand and holding it high above his head.

They earned themselves a standing ovation with that. The guy who was sitting next to me had never heard of Texas Hippie Coalition before this, later telling me he loved it. I think a lot of people were in the same boat, being clueless at first, but loving the presentation and the way they interacted with the crowd. Indeed, they did everything within their power to win people over, and the crowd was receptive to it all. 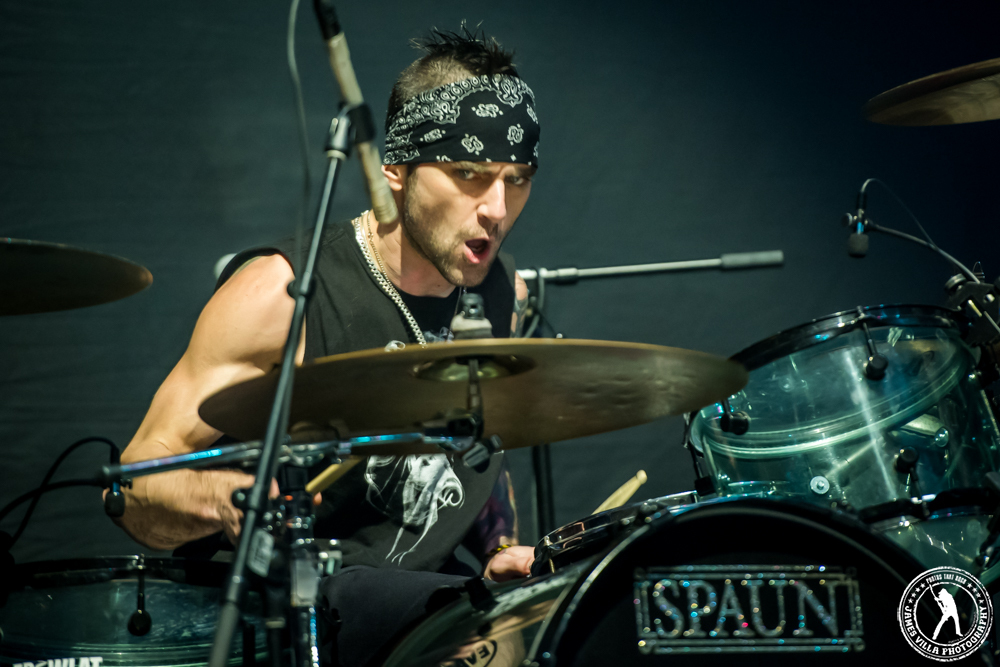 I must say, some of the conversations stretched on a little too long. It’s like they lost the momentum they had going, quickly regaining it with the next number, then again it slipped away when they killed a few more minutes by chatting. It’s not like they weren’t entertaining, simultaneously serving a purpose, though I think it would help if some non essential parts were cut out of the dialogue to streamline things.

Other than that, I really enjoyed my third Texas Hippie Coalition show. Actually, this was my first time seeing them in Texas, with the other two having been up in Oklahoma. Great musicians and the Red Dirt Metal group know how to do things, like set the stage for the one and only, Judas Priest.