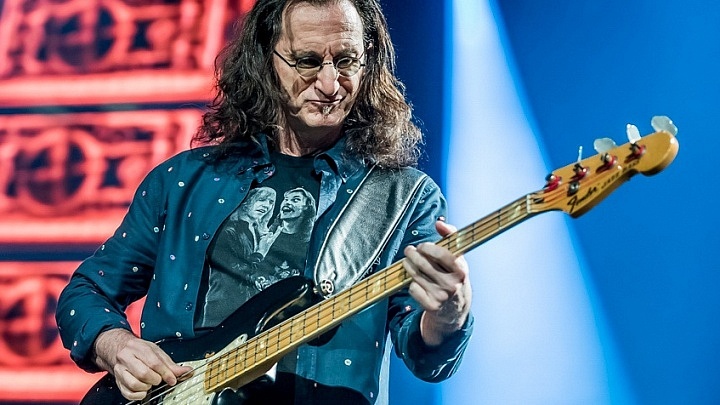 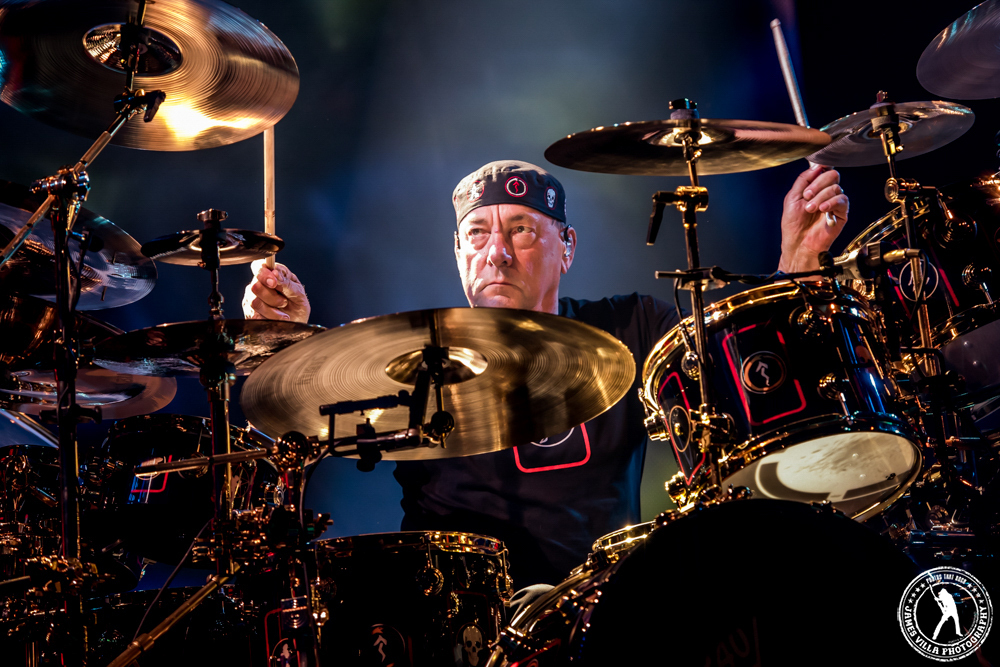 Walking around the American Airlines Center this night was interesting. There was a primary demographic, yet no real set demographic. Sure, generally it was a middle-aged crowd, though people of several decades of life waited to get in. Twenty, thirty, forty-somethings and beyond, all were there, many loading up on and some even changing into the tour shirts after buying them.

Tour shirts of what? Well, shirts that marked a milestone anniversary of one of the biggest game changing rock bands in history: Rush.

They may have been kicking for the better part of a half century in all, though the current lineup has been intact for forty years now, and that was what this was really celebrating. The trio dug deep into their catalog this night at the Dallas stop of the R40 Tour, performing to 20,000 DFW residents who snatched up the tickets while they could.

The atmosphere inside was more like a reunion than a concert. Everyone was chatting, even if it was with friends or family who had accompanied them; and there were a few people I saw who shouted out to old friends, walking over to shake their hand, amazed they happened to see each other in such a space.

The R40 logo was illuminated on the massive curtain that covered the stage; some patrons still wandering around on the floor, just killing time. A select few had hats on their heads that looked like a hen. Of course, music was playing over the PA system, and as each song ended, the fans would break into sonorous applause and cheers, as if that would bring the band out. It was worth a try.

The innovative group had plenty of surprises in store for fans this night, a video showing once the lights dimmed. Cartoon looking figures of Alex Lifeson, Neil Peart and Geddy Lee journeyed around the world, their attire changing depending on where they were, and throughout, their appearance changed to fit their looks at the time as they slowly aged. It was fun, very visually stimulating; before ending with silhouettes of the bass player on stage left, the guitarist on the right and the drummer in the center. As the curtain was raised up, that’s exactly where they stood. 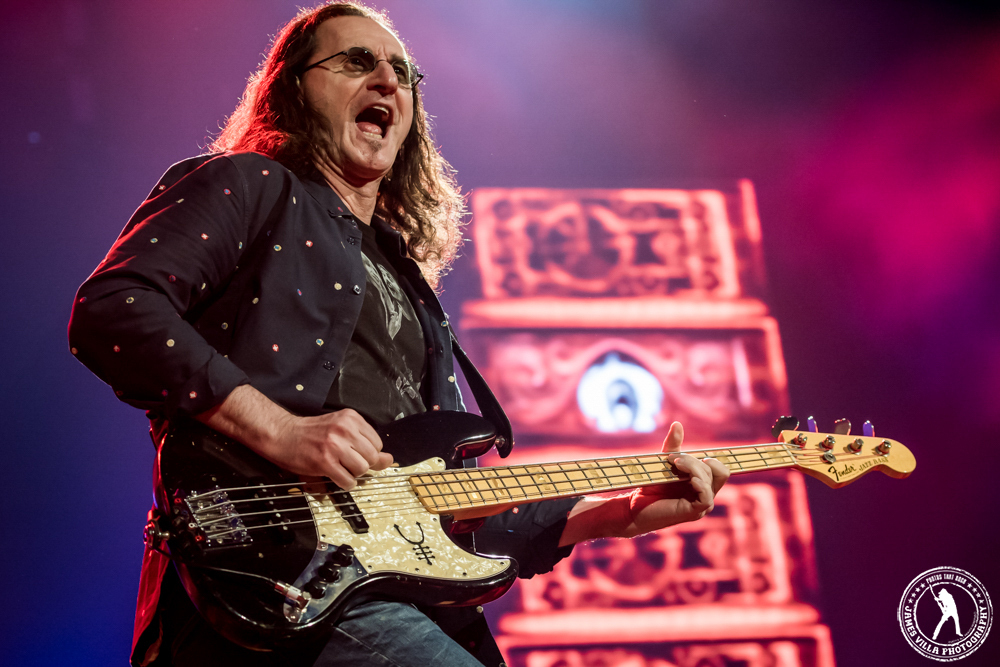 The first of two sets got underway at 7:46; and the most obvious thing was not the band, but the stage props positioned around them. Some industrial looking barrels, some of which had what resembled gramophones on the top of them. Behind Lee was a massive brain in a jar, and oddly enough, a popcorn maker—the likes of which you see in a movie theater—was not far from that.

A few songs from their latest release, 2012’s Clockwork Angels, were up first this night. “The Anarchist” allowing Lifeson and Lee equal time to cut loose on their instruments, eyes constantly darting from one to the other, which was at times hard to keep up with, as Lee sprinted around the stage when he could.

The room went dark as the lights went out; some of the stage lights descending from the rafters, either shining out on the crowd or providing even more light on the stage as they tore though “Clockwork Angels”, which found many of the fans raising their fists into the air. As the lights again went out, the spectators soon went wild upon hearing Lifeson knock out the opening riff of “Headlong Flight”. In three short years, it has apparently already become a classic to fans.

One of the most interesting things of the night was how the stage crew was constantly transforming the props, like during that one, when one of the barrels became a dryer (or a front loading washer) with video of some laundry going around and around playing. That soon became an afterthought, though, as Lee hit some impressive notes right at the end, holding them for a few seconds.

“Thank you and good evening, Houston!” the singer joked, and it was obvious to tell it was a joke, as he instantly corrected himself, well before the crowd had a chance to voice any disapproval they may have had. Most were just laughing at it, though. Lee didn’t seem to be exaggerating when he said they had a thousand songs to perform this night, noting they would be covering every stage of their career, as they jumped back eight years prior to this, doing “Far Cry”. Some nice visuals were broadcast on the screens at the back of the stage (a baby buggy traversing an apocalyptic type world, where cities laid in ruin); though the highlight was when some pyro went off, catching everyone off guard, who jumped before looking on it awe. 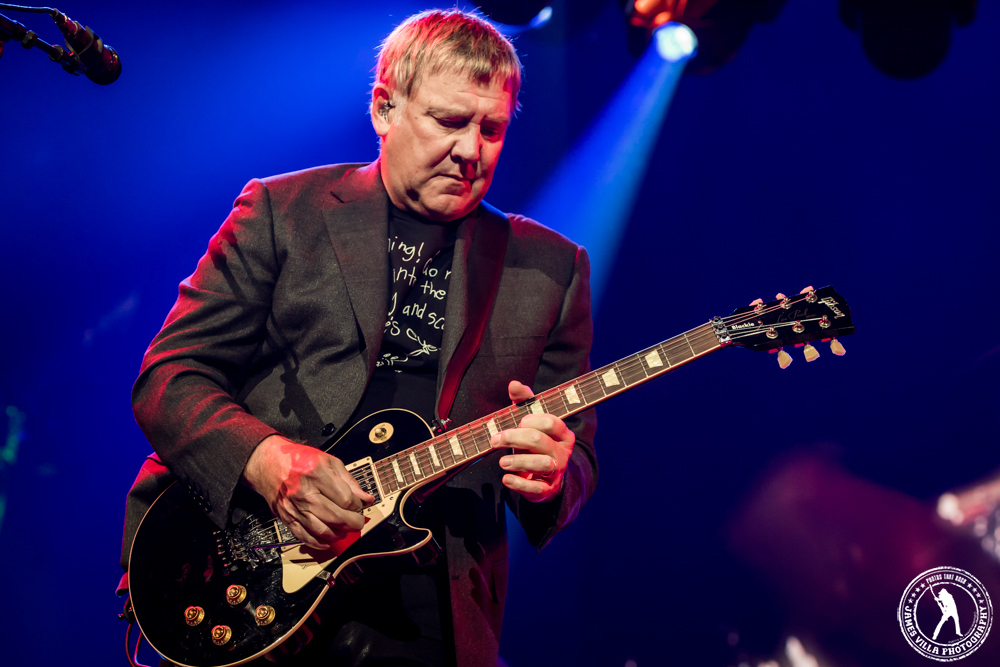 The trio was totally in their element while rocking out “The Main Monkey Business”; and some pyrotechnics were used during “One Little Victory”, rows of fire erupting in front of Peart’s drum kit but behind Lifeson and Lee. It was so intense the heat was easily felt on the floor, looking spectacular.

The then jumped further back, to the 90’s to be specific, playing the lead cut off Counterparts; while the title track from “Roll the Bones” was a definite highlight of the night (the intro alone looked incredible as a plethora of dice rolled up on the screen, the black colored die spelling out Rush, exactly like the album artwork.) The rap part was done to a video that boasted a star-studded cast, from Jason Segel, Paul Rudd and Peter Dinklage to name a few, which was as hilarious as it was cool (and when the Game of Thrones star first appeared on screen, he received the biggest applause.)

The 64-minute long set then ended with two cuts from A Show of Hands, patrons audibly telling their friends that “Subdivisions”—the closer—was one of their most favorite songs ever; and it saw Lee putting his keyboard to use.

The curtain began to descend, many of the fans looking confused as the band expressed their thanks. “We need to take a short break for our senility…” Lee quipped; assuring everyone the night was far from done.

The intermission allowed everyone to go get some snacks and beverages, stretch their legs, or whatever else they wanted to do. It wasn’t quite 30 minutes, and then Rush was back for round two.

But first, another video (only after they had some fun at their own expense. The words “Our 40” turning into “Arrr 40”, a momentary clip of Lee wearing some pirate garb flashing on the curtain.)

This one was titled No Country for Old Hens. It was polished quality-wise, looking like a feature film, though it was largely outtakes, the green screen being visible as some of the actors improvised lines after forgetting them (all of Rush appeared throughout), just cutting up and having fun, leaving this Dallas crowd rolling. 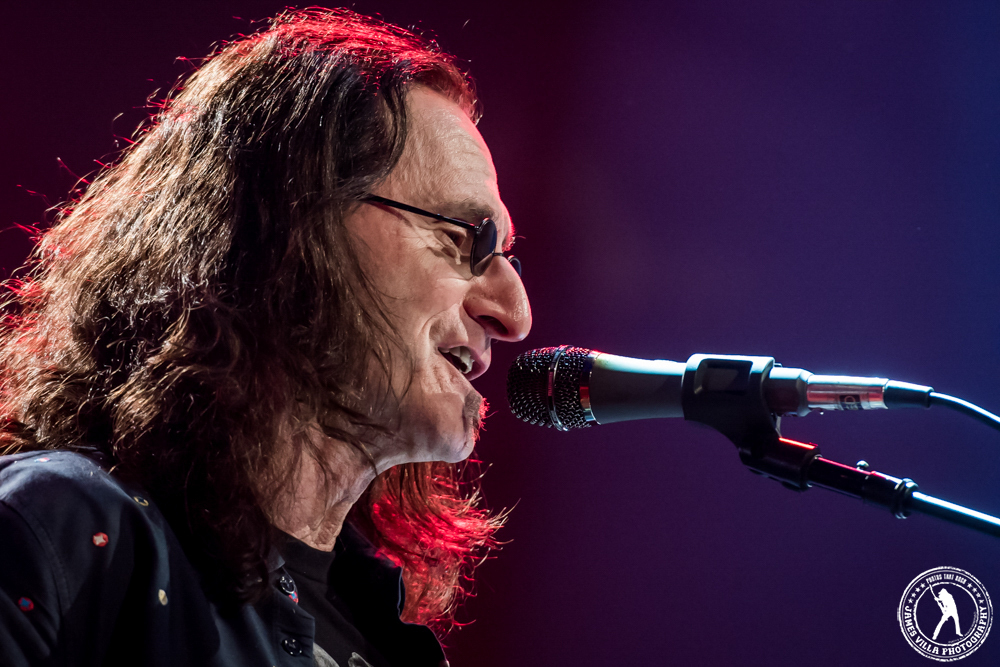 The curtain had barely begun to rise when “Tom Sawyer” kicked in, taking everyone back to the start of the 80’s. “YYZ” was paired with it, Lifeson and Lee rocking out with one another at first, the bassist even leaning back towards his band mate, both flashing the biggest grins imaginable. Peart was the main point of focus on that one, though. The drummer showed a seemingly unbreakable concentration for the duration of their time on stage this night, enjoying it, though seldom showing any sign of emotion as he hammered out the beats, tossing a drumstick out to one super lucky fan when the jam was done. Did I mention the lasers that were used during that one? ‘Cause man, did those ever look amazing, especially sitting underneath them.

The setup for this second act was more bare bones than the first, stacks and rows of amps forming miniature walls behind Lee and Lifeson, definitely behooving of the arena rock feel. They then went back to the preceding album, fans clapping long before being asked to during “The Spirit of Radio”.

A couple cuts later and then they got to Hemispheres, “Cygnus X-1 Book II: Hemispheres” doing the Prelude, using it to set up the song that ends Farewell to Kings, doing parts one and three of “The Voyage”. It was during the latter that Peart again flexed his muscle, tackling into a few minute long drum solo, a sort of rainbow of lights shining on he and his kit, looking quite magnificent as they reflected off the cymbals.

“Ladies and gentlemen, The Professor on drums,” Lee announced when it was all said and done, referring to Peart. They stayed in ’77 with “Closer to the Heart”; then busted out the double-neck bass and guitar for “Xanadu”, which somehow, didn’t seem to be nearly as long a song as it is.

This 72-minute second set than concluded with several parts of “2112”, all flowing together seamlessly, furthering the epic feel that some of the past material had already established. 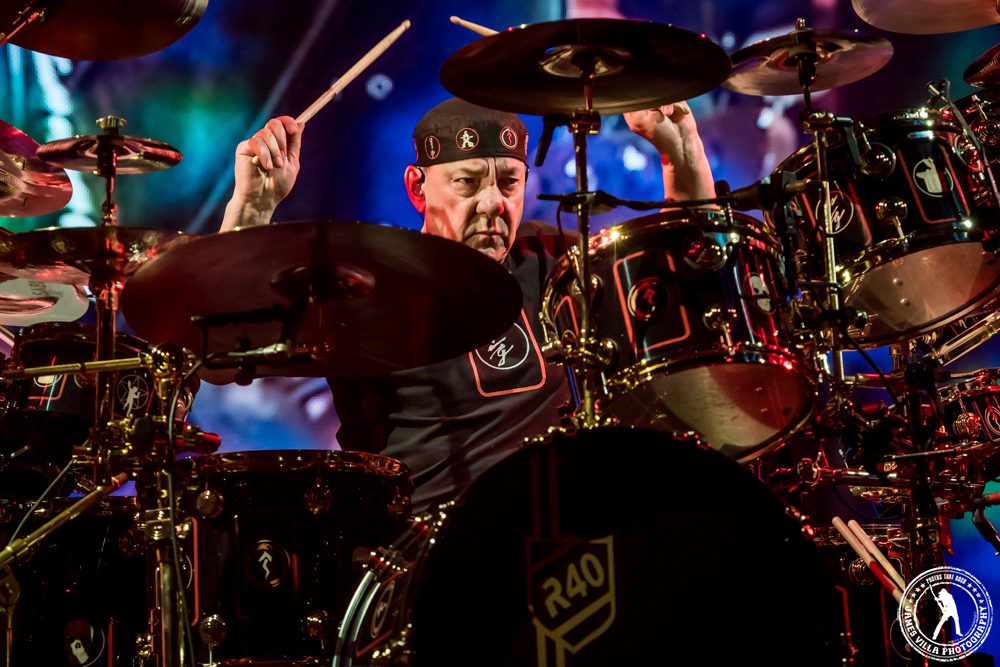 Again, the curtain closed, but everyone knew an encore was on the way.

Another highly entertaining film played beforehand (this one starring Eugene Levy), who was setting the stage up for an up and coming band who had already opened for Kiss twice (“Can you believe that?! Twice!”). It felt as if he were hosting a talent show, hyping this next band, but also taking shots at them, like the fact that they were a trio and probably needed to change some things, saying something to the effect that no trio will ever make it in the rock world. A cackle echoed through the arena, the audience loving that. To no surprise, he was introducing Rush, the stage having been quickly transformed to look more fitting of a garage band still trying to find their place in the world.

The four-song encore would see them touching on Caress of Steel, Fly by Nightand Rush, with “Working Man” ultimately being the closer; thunderous applause and cheers coming from the crowd. The crowd, who had been on their feet all night long, remained like that, ensuring the legends got the standing ovation they oh so deserved.

Apart from that, who knows when Rush will get back to Dallas, so until then, I think everyone wanted to send them off in style.

With this being the final large-scale tour Rush plans to do, this was, in some ways, a goodbye. Granted, they’re not hanging it up yet, saying that small scale tours are pretty much guaranteed, though you know the opportunity to see them every two to three years is in all likelihood now gone.

There was never any trace of sadness in the air at American Airlines Center this night, though. There was never a direct mention of any sort of goodbye. Instead, it was just three highly skilled musicians doing what they love, not just performing their music, but performing it for people who they know absolutely love it. Three guys whose chops have not faded and are still extremely spry to be in their sixties; and they often had you looking on in awe. They don’t build bands like this anymore.

The goal in anything is to go out on top. When you’re still revered and admired and haven’t lost your edge. So, if this really is a sort of beginning of the end for Rush, I think they’re achieving that. But yeah, let’s hope this is more just a “so long for now” rather than a “goodbye”.