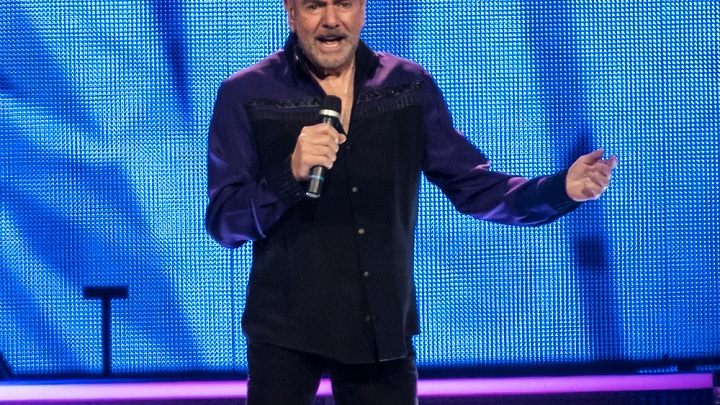 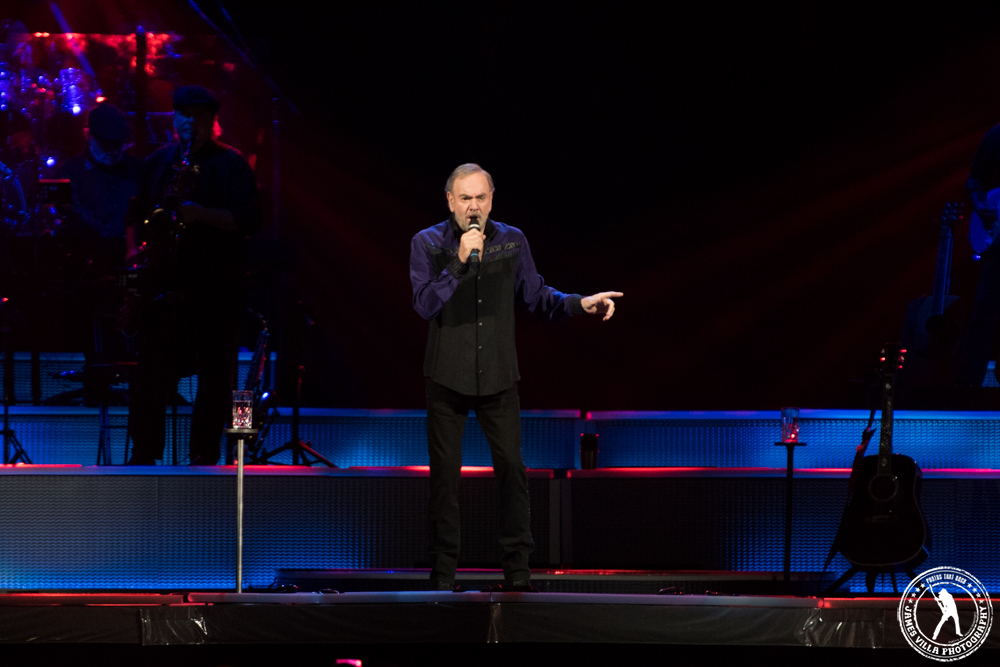 Chances are everyone who came out to American Airlines this night was ready to take a trip down memory lane.

A primarily older crowd made up what certainly appeared to be a sold-out show, with even the highest nosebleed seats being open (something that doesn’t happen at just every show) to accommodate the 20,000+ people. It may have largely been people fifty and up, though there were plenty of patrons representing nearly every other decade from the forties on down, all of whom were brimming with excitement over the fact they would soon be seeing Neil Diamond.

The stage setup almost had a Vegas show feel to it, an outline of a diamond at the back of the stage, text of the legendary singers name being displayed as people waited anxiously, getting drinks and food before settling into their spots.

The stage was lined with instruments, a row of nine guitars for the guitarists to choose from once things were set in motion, among other instruments. As I sat there, I overheard a woman in the row behind me reminiscing about her younger years, sharing with her friends the connection she had to one of Diamond’s songs. “…Music creates so many memories,” she said to them, a sentiment I think everyone there this night would agree with; while the screens that would soon be showing a live feed of the show for those who didn’t have the best view currently showing tweets and others posts so long as they included the hashtag ‘”TweetCaroline”. 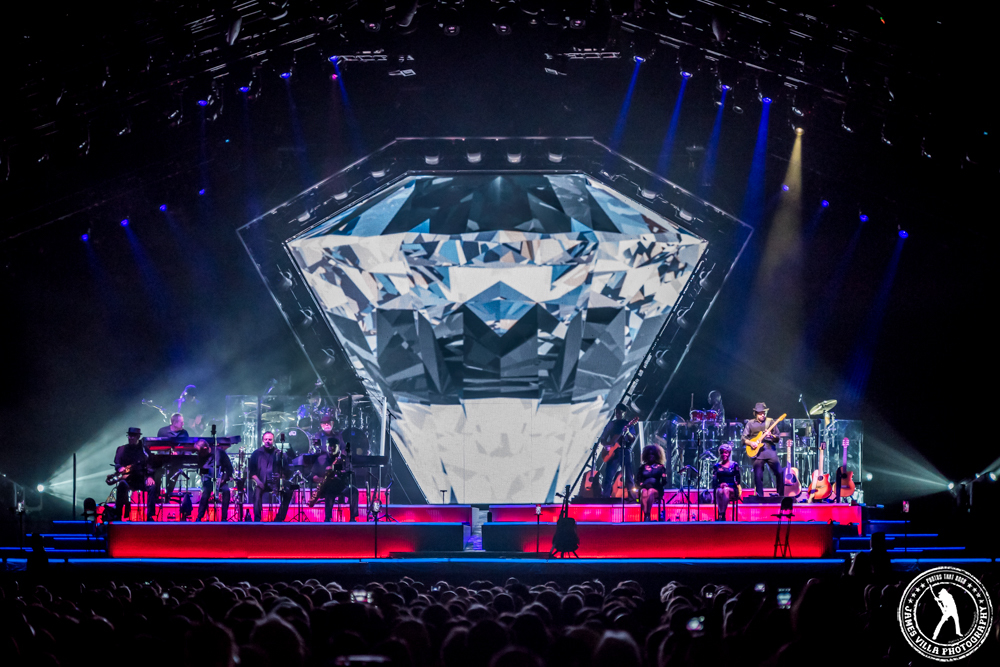 A couple times a pre-recorded announcement mentioned the show would be starting shortly, politely asking people keep phone use to a minimum, with no flash photography and other points of etiquette being mentioned, as well as making clear there would be no opening act, as this was an evening with Neil Diamond. It wasn’t long after the second one that the massive band was seen filing on stage, the arena erupting in wall-to-wall cheers. Two percussionists, two females backing vocalists, a couple guitarists, a bassist, a horn section and then some took the stage at 8:23, taking off on a grand but rather soothing, at times even operatic piece leading into the opening number. A diamond appeared on the screen where “Neil Diamond” had been displayed, the stages lights appearing as if they were reflecting off the colossal diamond as it begun to spin.

A door opened form the base of it, as Neil Diamond himself walked out, greeting the plethora of fans with an exuberant, “Come on, Dallas, Texas! Are you ready to par-tay, y’all?!” I liked the fact he used the appropriate Southern lingo. A clap along began, all by the fans design; while Diamond added, “Let’s get to work!” Work was exactly what this was, though it appeared to be pretty enjoyable work as he often grinned while walking back and forth along the stage, singing the chipper “I’m a Believer”. The jacket he sported didn’t last long, as he removed it halfway through or so, tossing it on the platform where the two backing vocalists stood, while he continued to pace.

This setlist, the selection of songs for it, was something else, with plenty of crowd pleasures coming right out of the gate, songs such as “Love On the Rocks” having a sort of intimacy about it, as if it were a tale Diamond was sharing with each individual this night. “How wonderful that is to hear people coming out, braving the night…” he mentioned upon finishing, throwing some other hassles in there, such as traffic, before getting a collective laugh as he thanked everyone for braving the souvenir stands. “ [It] makes me feel like I’m seventy again,” he quipped, speaking of how amazing it felt to hear everyone calling his name and applauding. “Hello Again” then boasted a similar feeling to the previous number, as if it were one meant exclusively for the fans; the people fortunate enough to be on the floor rising from their seats to sing along as they hit the final chorus. 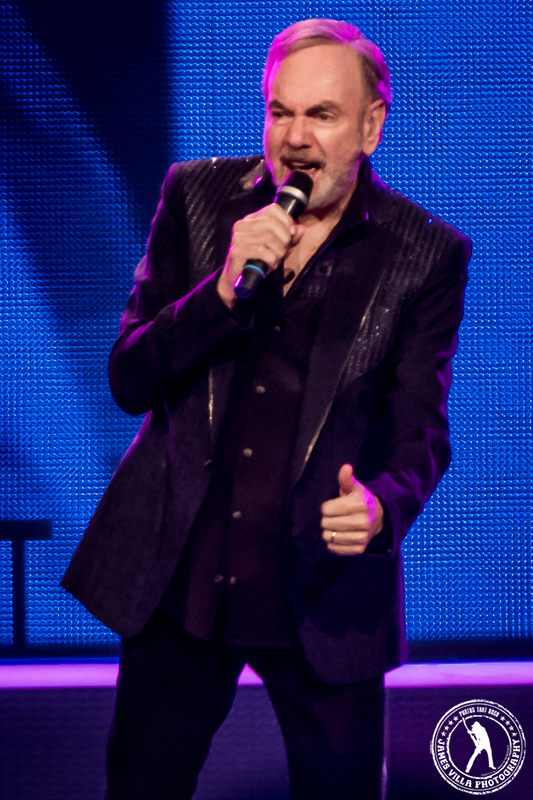 Shortly after, Diamond grabbed his acoustic guitar for a song, the spectators reacting strongly to “Kentucky Woman”, singing along, the singer graciously bowing when it was all said and done. Diamond and his band continued breezing through songs, each one getting strong reactions, before stopping for another moment so he could catch his breath, not that he seemed to need it.

“My heart is going thumpety thump, thump,” said Diamond, noting how close he felt to everyone, even those far in the back. His attention then turned to those setting on the sides, the people who, as he said, were only getting a profile view of the show. He went over to stage left and asked them how they came into those seats, wondering if it was an upgrade they were offered. “You paid for those seats?!” he said sounding surprised when someone told him they had intentionally chosen them. Something tells me those patrons didn’t mind the profile view too much; and Diamond continued to cut up as he introduced a love song he stated he had written “many years ago”. “I actually remember some of the words…” he finished, soon beginning the still gorgeous “Play Me”.

Most everyone—even those in the stands—were on their feet for “Red, Red Wine”, while they clapped along to the beat for the duration of “Beautiful Noise”. Before “Brooklyn Roads”, Diamond got a little nostalgic, taking a seat on the stage and sharing a story about his father, who bought a video camera the day he [Neil] was born, often filming he and his brother as they grew up. Diamond said how much he cherished those videos, how neat it was to look back now and see them, mentioning that while possessions may have been few in their household, the love was great. Some clips of those home movies were then worked into a slideshow that played during the track, leading many fans to exclaim to their friends how much Diamond looked like his father. 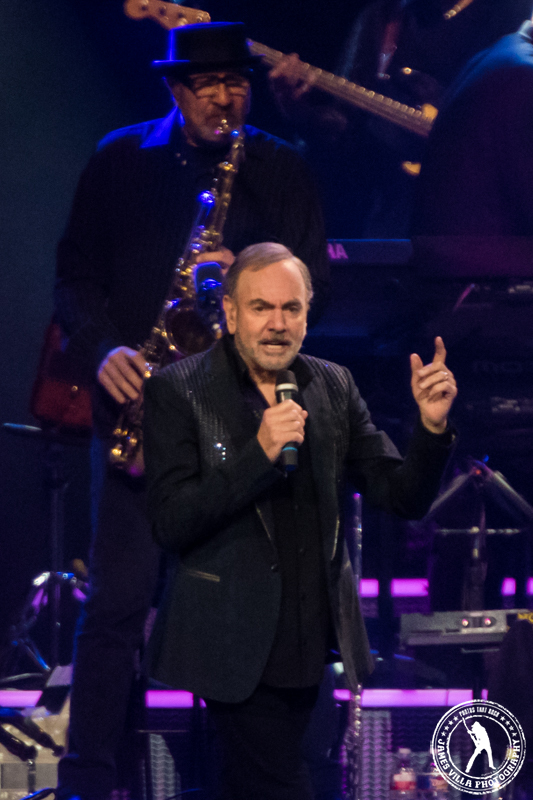 Fanfare again erupted once everyone recognized “Shilo”; and while this tour was in support of Melody Road, his 32ndstudio album, there was only one song from it played this night. He made light of the fact that “The Art of Love” had taken him a considerable amount of time to write (years), yet could be played in just a few minutes, though the emotion captured in the stunning love song was definitely felt in those few minutes. Truly an amazing song; and the official lyric video played on the screen, adding a nice touch to it.

With the end in sight, they pulled out another hefty dose of favorites, “Cherry, Cherry” seeing Diamond introducing each member of his band (“the greatest band in all the land” as he said beforehand), letting them do a short solo, from the pianist to the synth player and everyone else. “It’s a thrill to play in front of this band. You really should try it sometime,” he stated when it was all said and done.

As “Holly Holy” reached its pinnacle moment, sounding so symphonic, the attendees again stood, clapping along; while Diamond stretched his arms out in front of him as it drew to a close, seeming to half be conducting his band, half basking in the love from the fans. “I Am… I Said” then earned the icon a standing ovation, one woman a row in front of where I was repeatedly bowing, while he walked from one side of the stage to the other, expressing his thanks to all he could.

That had been the quickest 89-minutes I had experienced in a while, just being so easy to get caught up in the show; and, of course, Diamond wasn’t through just yet. 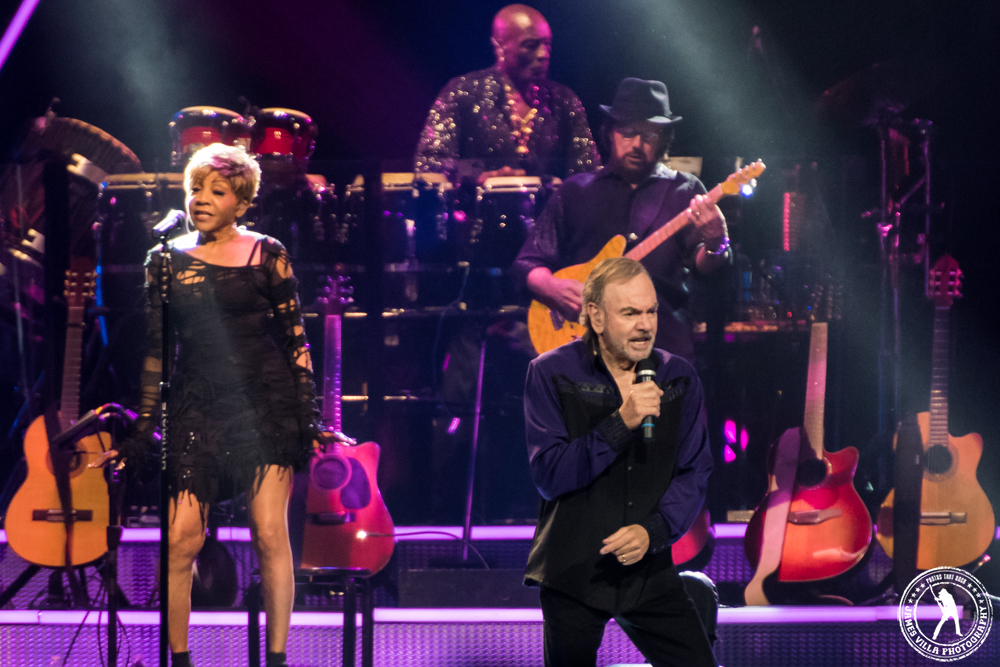 The five-song encore pushed this performance to a solid two dozen songs in all, featuring some of the biggest hits, “Sweet Caroline” and “America” coming back to back (plenty of audience participation was found on both), before they left everyone with “Heartlight”, seeming to give off a “until next time” vibe.

This was really extraordinary to see. It’s not that often you see a 74-year-old musician owning a stage, everyone focused one hundred percent on them. Most musicians/bands won’t even make it that long, and the select few who do usually seem to end their career while in their 60’s. That means Neil Diamond falls into a class that’s almost all his own.

He appeared very spirited on stage, wanting as much fan interaction and connection as he could possible get; and while time may have taken a slight toll on his voice, it was still so pleasing to listen to, retaining all of its appeal. You have to wonder how long he’ll continue to perform, because based on this show, there’s no real sign of his slowing down.

Timeless. That’s a word to describe both Diamond and his music. Everything he played this night was a classic, with that lone new song being a future classic in my opinion, all of which will find appeal with many generations to come. Generations who will build their own memories around his music; and those who were in attendance this night, they’ll have some excellent memories to share for a long time to come.