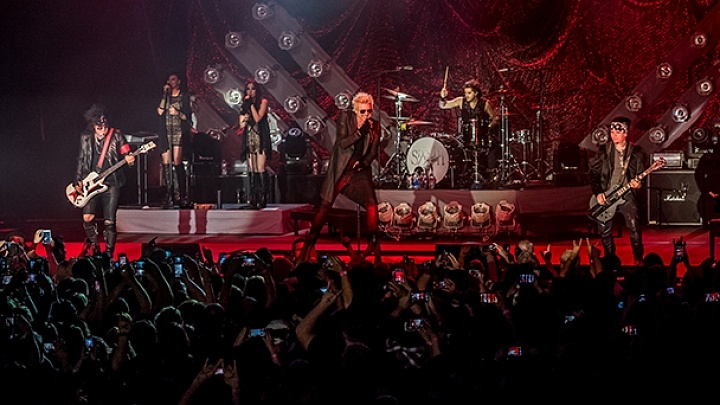 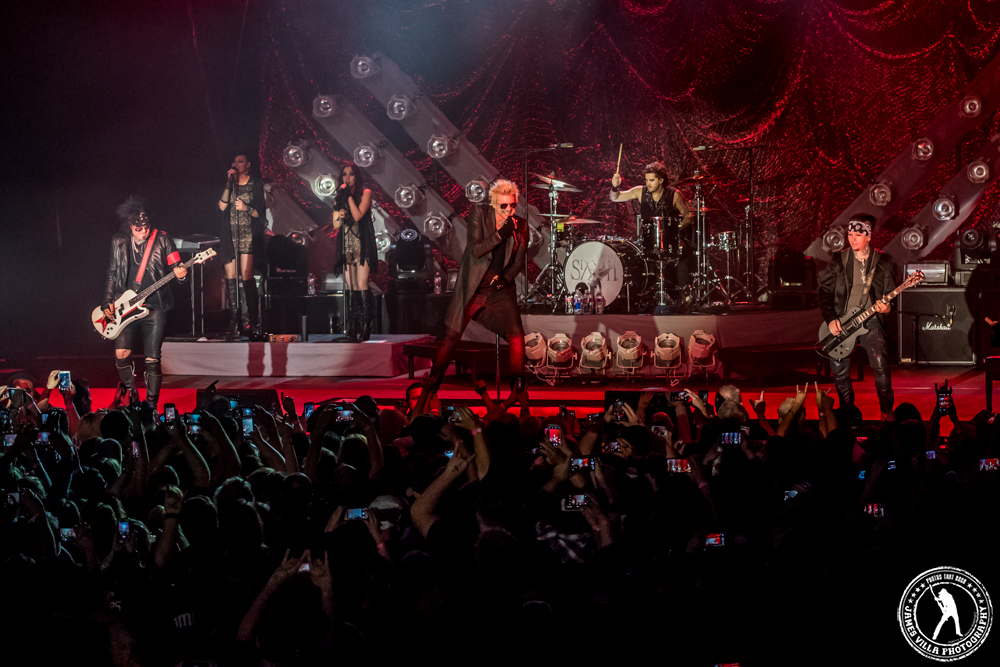 It was a busy Friday night in Dallas. A good handful of national acts were hitting the town at various venues, no doubt causing some hard choices to be made by music fans in the area; and even some great local shows were going on at the smaller clubs.

One of those big shows was going down at the recently opened Bomb Factory, as Nikki Sixx of Motley Crüe fame brought his solo project, Sixx:A.M., back to Dallas for the first time in nearly seven years. In walking in to Bomb Factory—a 4,400 capacity venue—it was clear this had been a highly anticipated event.

With the groups third LP having been released this past fall, they, of course, spent a good chunk of time on it, with the hard rocking “Let’s Go” beginning the near 80-minute long set. It got the audience going, clearly doing its job as the opening number, while all but one song out of the first four drew from the new release. The one that didn’t was the title track from 2011’s This is Gonna Hurt. 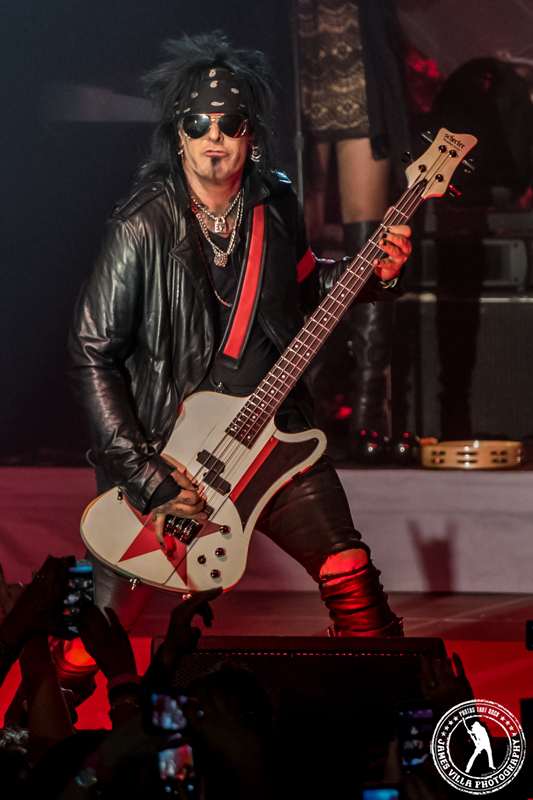 They had quickly placed their hold on everyone. James Michael may have been racing around the stage singing the songs and DJ Ashba was shredding on his axe, though all eyes were on Sixx, who was already completely in the zone jamming on his bass, sometimes staying in one spot and grooving to the music, while roaming about at other points.

They made the spectators wait for it, but with “Pray for Me”, they finally got to something from The Heroine Diaries. “…It sure is a lot of fun playing songs off The Heroin Diaries!” Michael exclaimed once it was done, setting up a little speech how everyone on stage was part of a broken bunch. “You are too, aren’t you?” he said to everyone moments before announcing “Dead Man’s Ballet” as the next tune. He had no trouble getting a clap along going during it; and Sixx was striking some excellent poses as he rocked out.

They were on a roll with those songs, with “Accidents Can Happen” keeping up the pace, Michael crooning some of the final lines in a pretty falsetto tone at the end. “Miracle” even fit with those tracks, despite coming from the current album. It was before that one the mic was handed over to Ashba who chatted with the crowd briefly, mentioning how long it had been and thanking all those who had waited and came out for this. 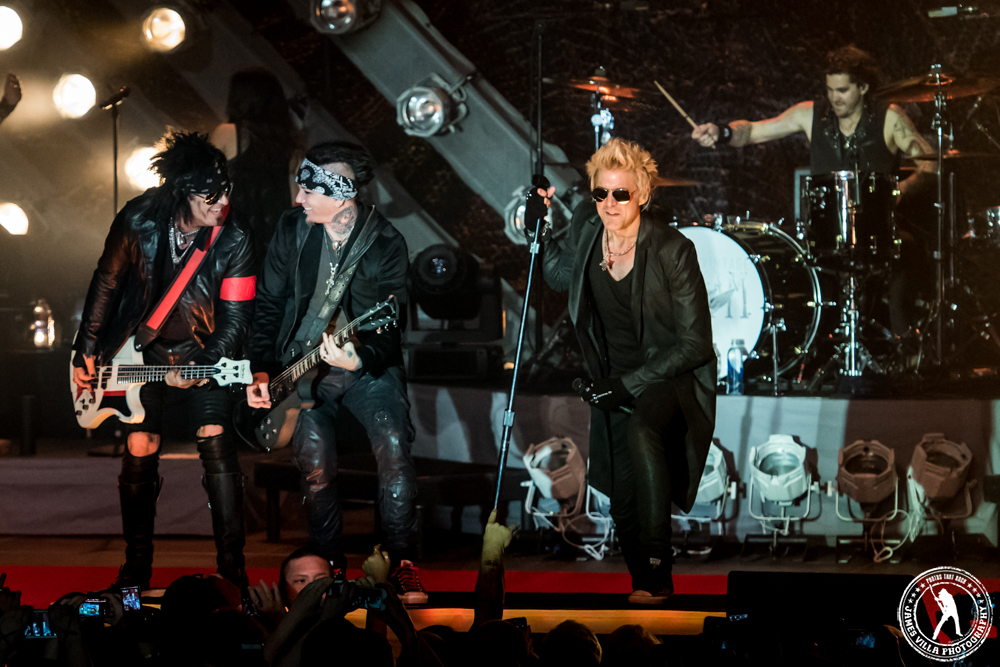 As they moved on to the moving “Live Forever”, Michael began making even more of a connection with the audience. There’s a balcony level at Bomb Factory, and he made his way to stage left, gazing up and singing to those on that side. However, the highlight came during the instrumental break, when the frontman headed for the wings; and Sixx hopped atop the drum riser, facing Dustin Steinke and even holding the bass above his head at times. “THAT’S RIGHT!” Sixx yelled as the track concluded. At least that’s sure what it looked like he was saying as I did my best at reading lips.

All night two female vocalists accompanied them, who hung at the back of the stage, mostly out of sight, but contributing some stunning vocals, the likes of which you just couldn’t get from using tracks. However, the ladies got mobile on “Gotta Get it Right”, making their way to the front of the stage, showing off a strong presence along with their killer set of pipes; and as a piano was brought out to center stage for Michael to play, they slowed things down some with a rendition of The Cars “Drive”.

Upon finishing it, the crowd proceeded to roar as Sixx walked over to the microphone, took it from the stand and then sat down. It created a real intimate conversation, despite the fact that he was speaking to a plethora of fans. He went through the origins of the band, how they came together while he was writing his book The Heroin Diaries, “…And what we found was by digging into the wound and pulling out the puss… we found ourselves. We realized by accident we became the messengers of hope,” he said. At that point, he was getting impassioned with what he was saying, touching on how they continuously said they weren’t a band, since that was never their original intent. “…And now you’re in trouble, ‘cause you made this happen,” he quipped, adding that while he thought he was getting ready to retire, he now had a promise to make, and that was in 2016 there would be a fourth studio album from Sixx:A.M as well as a world tour. 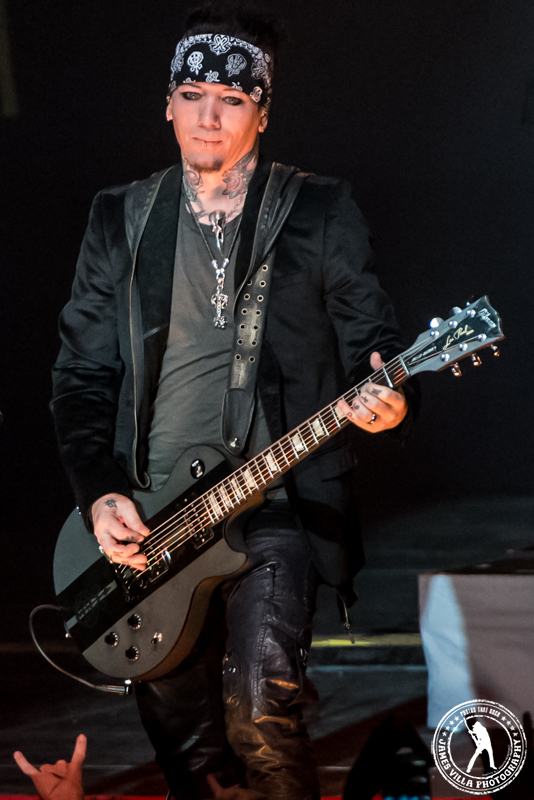 As “Help is On the Way” drew to an end, everyone except the drummer stood in a line at the front of the stage, drawing some massive cheers; and after a couple more songs, they finished with the current single off their new album, “Stars”, which saw some confetti raining down on everybody at the tail end.

An encore was coming, and before too long the group returned, easing into this final portion with “Skin”. They then resumed their hard rocking ways with “Life is Beautiful”, leaving everyone with what’s really a somber song, though carries a powerful message.

They never faltered, their 80’s-esque rock sounds being bold and vibrant, ensnaring all who were there. It was also nice to hear that while the end of this year may mark the end of one of the most popular rock bands ever, that Sixx will carry on with his music career. He could easily retire, or at the very least take a little hiatus, though the way he spoke this night, that’s the furthest thing from his mind. Apparently, even bigger things are in the works for Sixx:A.M. and I don’t think anyone will have a problem with that.