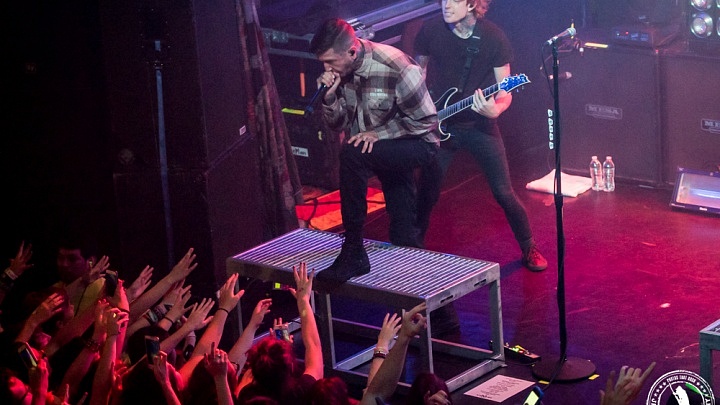 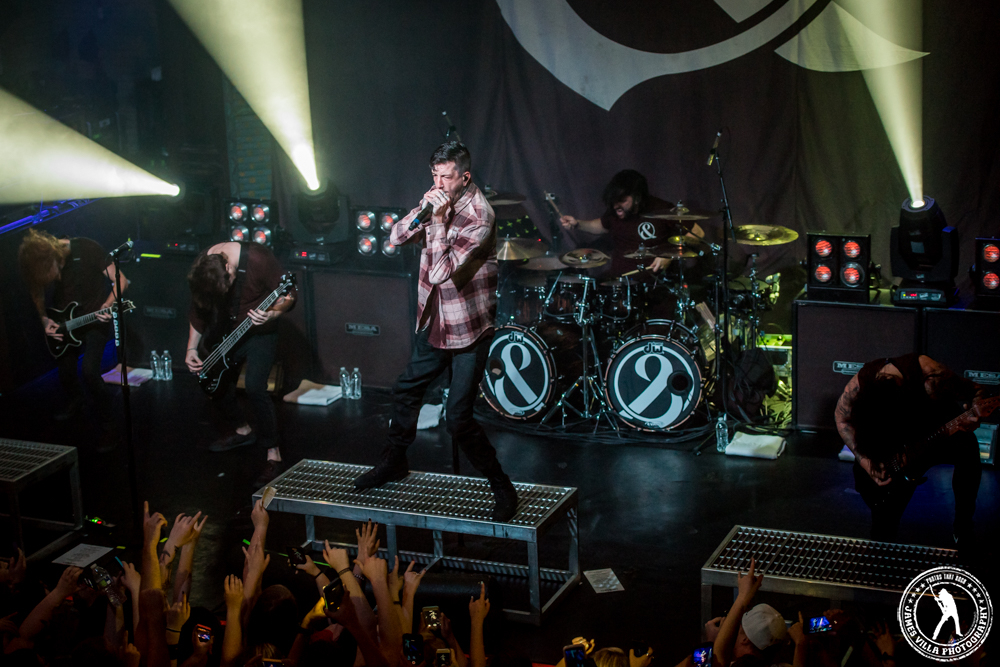 Exploring new venues and seeing new bands (new as in having never personally seen live) always makes for a fun experience; and on night, I was going to get both.The House of Blues in New Orleans became a pit stop on the journey to Florida for a festival, as Of Mice & Men performed one of the first few dates on their North American leg of the Full Circle Tour.Compared to the HOB in Dallas I’m used to, I was surprised how much smaller this one was. Part of the floor in the showroom was sunken, with another part being elevated, making for a perspective where you could see easily if you got the right spot. It still accommodated hundreds of people with ease though, which was good, because it was packed this night. Mostly teens to twenty-somethings filled the room, all enjoying openers Volumes and Crown the Empire, though there was no question who they were really there for.

The excitement spiked at 8:21, when the lights dimmed and everyone begun to cheer. Moments later Austin Carlile emerged from the wings of the stage, rubbing his hands together and cracking his neck, as if doing a few last minute stretching. His band mates soon joined as their 62-minute set was kicked off with the lead cut off last year’s Restoring Force record, “Public Service Announcement”. The frontman quickly asserted his dominance over the fans, often standing atop a riser as he viciously screamed out the lines. “You ready?!” he asked quickly during a momentary break he had, the fans roaring back at him. They even had a chance to sing a few lines on their own; before Carlile later led them in jumping about.

The set list this night drew heavily from that record, even incorporating some of the bonus tracks form the recording, like “Broken Generation”. Bassist Aaron Pauley showed off more of his vocal chops, doing a larger part of the singing; while Carlile continued to captivate everyone, thrashing around as he gripped the mic stand at one point, before removing it and really taking the energy level up several notches from what it already was. However, one of the coolest parts from that number wasn’t found in the performance but the fan participation, as much of the crowd sang along to every word, clearly taking it all to heart. 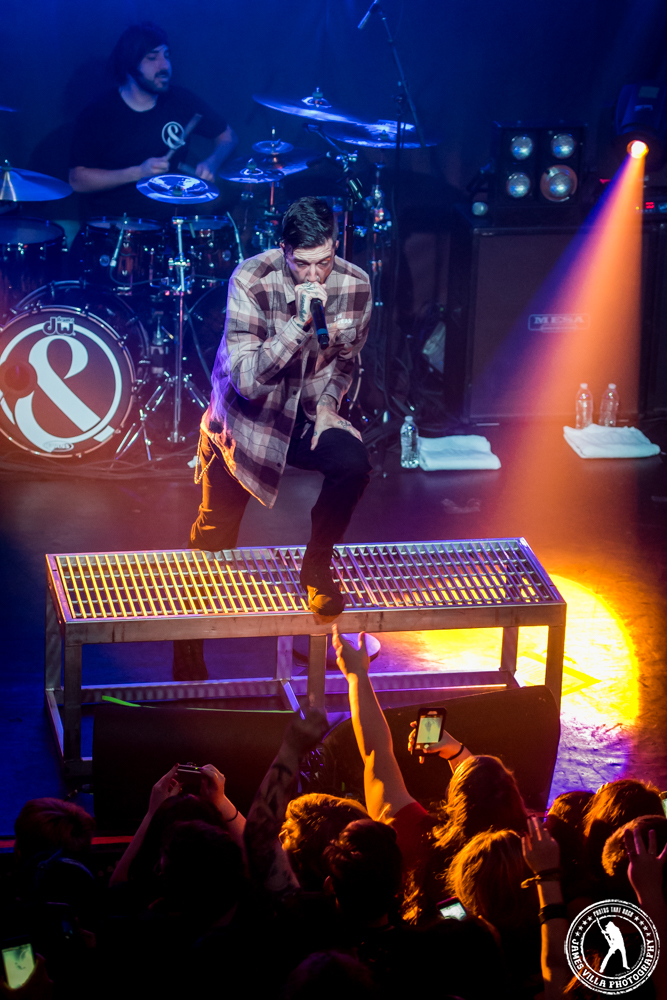 A pairing of tracks from The Flood, “O.G. Loko” and “Let Live” really sent the spectators into a frenzy, the latter of those easily being the most intense thus far as Carlile whipped everyone into an excited state, pointing at them and almost commanding they show him just how ready for all of this they were.

They even reached back to their self-titled debut from 2010 some this evening, with the first number form it being “This One’s For You”. Immediately after, rhythm guitarist Alan Ashby gained everyone’s attention when the recognized the song he was starting. It was one Carlile was confident everyone there knew, “Feels Like Forever”; and as it drew to a close, there was an incredible moment where the vocalist stood on the barrier, singing a few lines while holding fans’ hands.

Valentino Arteaga was left alone on stage, allowing him a momentary drum solo, before the rest of the band returned, Carlile promising they were merely getting warmed up. They backed those words up with actions, doing a series of other newer songs, a couple right after the other. “Would You Still be There?” was one of those, being an unquestionable highlight of the night, boasting some of the most amazing, remarkable energy as they all collectively crushed it. 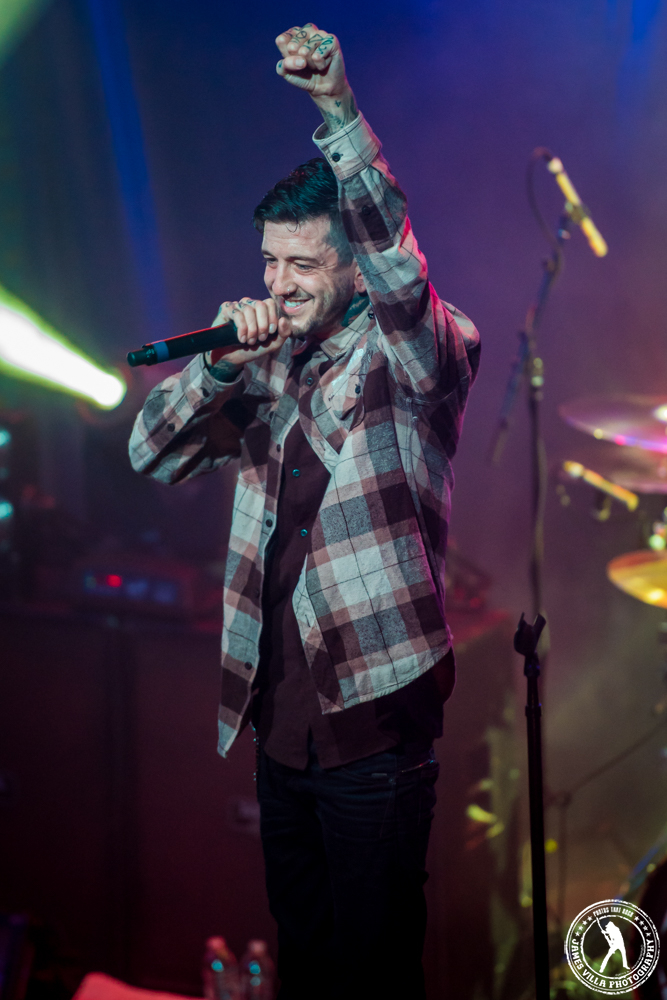 “Never Giving Up” was another of the bonus tracks they did from their latest LP; and upon finishing it, when asked how many people hadn’t seen Of Mice & Men before, about half of the room raised their hands. “I love that!” remarked Carlile, who more or less demanded a mosh pit during the subsequent tune, something some members of the crowd were happy to oblige with.

The frontman dedicated “Another You” to his mother, sending it out to anyone else who had lost someone that was irreplaceable, the often more mellow song causing the crowd to hold up and wave around their phones and even a few lighters. A tranquil intro then preceded the final song, one everyone cheered loudly for upon realizing it was “Second & Sebring”. There was a neat moment during that one where lead guitarist Phil Manansala joined Ashby and Pauley over on stage right, the three standing in a line and quickly swaying their axes back and forth.

That was that; the concert goers immediately wanting more as the band members disappeared backstage. One more song was all they were continuously asking for, so they were more than happy that the encore consisted of two songs. They left everyone with “You’re Not Alone”.

Personally, Of Mice & Men is much heavier than what I typically like, being well outside my wheelhouse. That doesn’t mean I can’t appreciate what they do, though. Of Mice & Men has a stage demeanor that few bands do, working the crowd with complete ease, having everyone hanging onto every last word and every single note as they ran through this incredibly raw performance. They were unbridled, quickly hitting their stride and just progressively growing more intense. Solid performers.

It was a fun detour, definitely a good way to begin the trip. Besides, it’s always nice to step out of your comfort zone every now and then.