Nothing More Announce New Video and Tour for “Jenny” 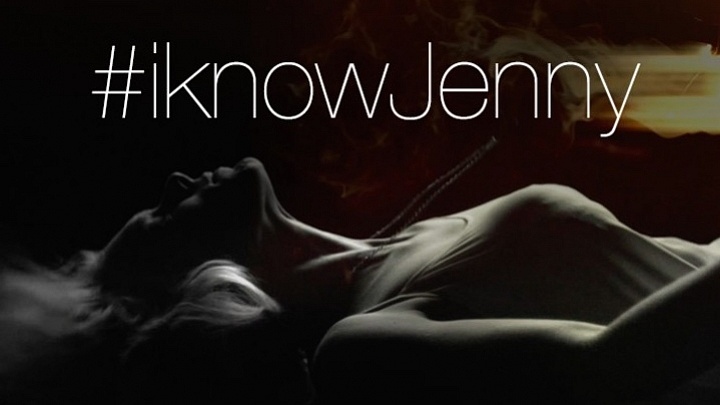 THE STORY, THE SONG, THE VIDEO, THE TOUR 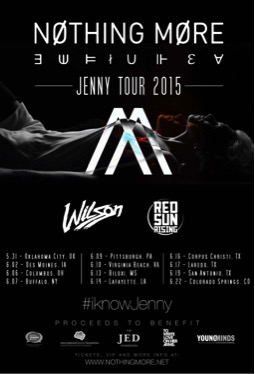 About 1 in 5 American adults will have a mental health condition in any given year, but only 41% of them will receive services. (source – NAMI)  If mental illness is this pervasive in our population, why isn’t it discussed more often?  Why are people resistant to getting help?

Texas-based rockers, NOTHING MORE, along with To Write Love On Her Arms, Bring Change 2 Mind, International Bipolar Foundation, The Jed Foundation and Young Minds (UK) will seek to spread the facts about mental health to music fans worldwide.  They plan to do this through discussion of vocalist, Jonny Hawkins’ tale of his sister’s struggle with Bipolar Disorder in the song “Jenny.” “Jenny” is also the brand new radio single whose video – directed by Hawkins himself – debuts at Billboard.com (http://bit.ly/1GYyJ7c) today. Funds will also be raised for the charities via a new PledgeMusic campaign the band is starting at http://pledgemusic.com/nothingmore

JENNY TOUR 2015 will be the name of the band’s headline tour this summer. NOTHING MORE will bring their acclaimed live show, as well as openers Wilson and Red Sun Rising to select cities throughout the US. Dates below include radio shows and festivals they will be playing along the way. Examiner explains of their live show “These guys are adding a new dynamic to the rock world in form of a lively stage show full of percussive tricks, twists and slips that establishes a new standard of talent and dexterity in the rock world and mentally turns it on its head in the process… their stellar performance likely garners them a brand new fandom.” Tickets for the JENNY TOUR 2015 will go on sale Friday 4/10/15 at 10AM. Proceeds from the VIP ticket sales will also be put into the fund being distributed among our partners. VIP tickets can be purchased at ticketspin.com as of Tuesday, 4/7/15.

Discussion of “Jenny” will be pervasive throughout social media, using the corresponding social media hashtag #iknowJenny.  Facts, quotes and relevant articles will be shared by the band via http://bit.ly/iknowJenny and on their tumblr, facebook and twitter accounts. “One way or another mental health issues affect us all… As we bring this topic into the light of public discussion and apply ourselves to understanding, we will begin to build a world in which moments like the Germanwings plane crash become a thing of the past,” says Hawkins. “We see the tragedies that sometimes occur as a result of unchecked / untreated mental illness, but what we never see in the media is when tragedy is avoided by compassion offered to those in need and how those moments of understanding and assistance can drastically alter a person’s path.  The purpose of #iknowJenny is about extending a hand and teaching people that they need not be afraid to ask for help.  My hope is that this song and video can be used to inspire people to learn more about mental health and addiction issues, so that they can make a difference in someone’s life.”

Hailing from San Antonio, NOTHING MORE is a four-headed musical hydra that runs on frenetic passion, unswerving DIY spirit and relentless sonic experimentation. Part schizoid System Of A Down weird-isms, part Mars Volta-esque prog rock freak out, part effortless pop nous; they seamlessly barrel from churning headbang to skyscraping chorus and back again in the blink of an eye. Capable of bombastic bounce that hits as hard as an uppercut to the jaw when they fancy it, the band is equally able to dial down the bluster into deft moments of crystalline beauty when the mood takes them. It’s a gut-punching blend made all the more powerful by a keen lyrical sophistication and philosophical undertone, which both belies their years and marks them out from their contemporaries. Artist Direct goes to the heart of NOTHING MORE’s appeal “(NOTHING MORE) indisputably stand out from their peers, yet they can enjoy mass consumption and unanimous radio play because they write intricately irresistible songs. The trick is they find that delicate balance between technical grandiosity and catchy palatability. That’s why they’re so important to rock music right now. They’re crucial to its future and how it flourishes in the same way that Tool, Deftones, and At the Drive-In were upon first debuting. Simply put, we need Nothing More.”

About To Write Love on Her Arms – http://twloha.com/

help for people struggling with depression, addiction, self-injury and

suicide. TWLOHA exists to encourage, inform, inspire, and to invest

directly into treatment and recovery.

About The Jed Foundation – http://www.jedfoundation.org

The Jed Foundation is a NYC-based non-profit dedicated to providing young people with the resources they need to strengthen and enhance resilience, coping skills,

connectedness, and awareness that help, if needed, is there. Tragically, suicide among teens and college students is the second leading cause of death in the United States. By creating committed partnerships with higher education institutions, The Jed Foundation provides schools with clinical guidance to assess and improve their mental health, substance abuse and suicide prevention services so that our campus communities will be safer and healthier.

In 2009, Glenn Close co-founded Bring Change 2 Mind (BC2M), a not-for-profit organization dedicated to ending the stigma and discrimination surrounding mental illness through widely distributed Public Education Materials based on the latest scientific insights and measured for effectiveness.  The idea for the organization resulted from Ms. Close’s first-hand observation of the battles with mental illness within her family.  Ms. Close’s sister, Jessie, is successfully living with Bipolar Disorder, and Jessie’s son, Calen, lives with Schizoaffective

Disorder, and all three are actively involved in spreading the BC2M mission. Additionally, BC2M acts as a portal to a broad coalition of organizations that provide service, screening, information, support, and treatment of mental illness.

International Bipolar Foundation (IBPF), was founded in June 2007 in San Diego, California by four parents with children affected by bipolar disorder. Well aware of the trauma that bipolar disorder causes for consumers and their families, these parents felt compelled to do something constructive to help. IBPF is a non-profit organization helping people in over 180 countries with our free services and programs, all of which are globally accessible. Our mission is to improve understanding and treatment of bipolar disorder through research; to promote care and support resources for individuals and caregivers; and to erase stigma through education. To learn more, go towww.IBPF.org