Nickelback Connects with Fans During Explosive Show in Dallas 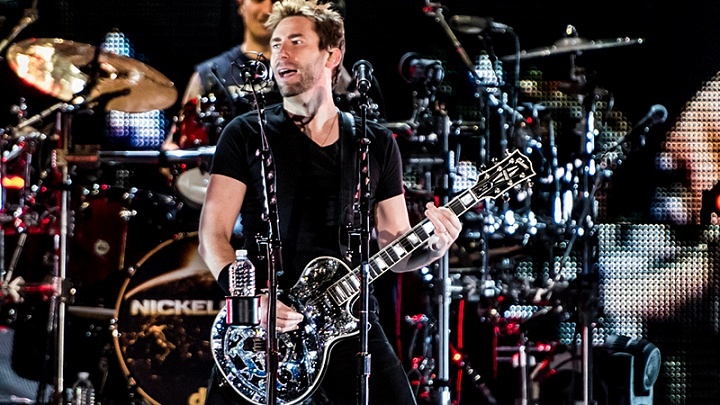 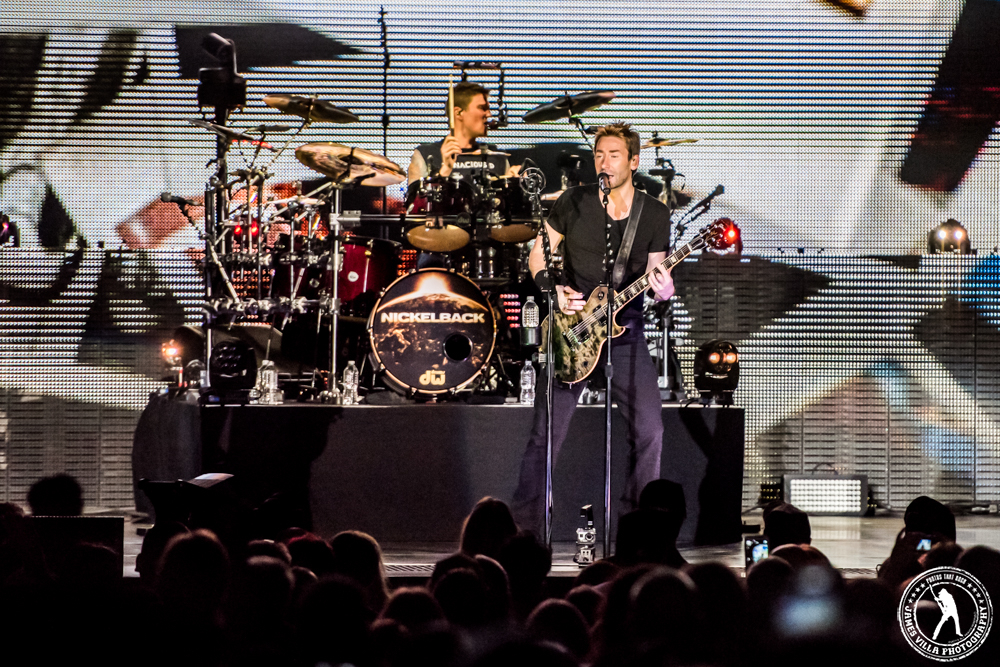 Is there any band in current pop culture that’s a bigger punching bag than Nickelback?

The joke about how the band supposedly got their name makes the rounds surprisingly often, like when someone decides to post it on their social networks as if no one has ever heard it before. Similarly, the band is still regular fodder amongst many people online, who come up with some crack about the Canadian rock stars every day.

People can say what they want, but in the grand scheme of things, Nickelback is a band who has been in business for twenty years now, still producing massive radio singles; and their fan base hasn’t wavered. They can still fill an arena, as was seen in Dallas on this night as people flocked into Gexa Energy Pavilion with smiles on their faces. That kind of staying power is seldom seen these days.

The demographic was widespread. Couples in their forties were there, most having sprung for the seats, while the younger crowd (some of them, at least) were out on the lawn, not getting the best view, but still very much a part of the action.

Pop Evil delivered a great set as the opening act. They were featured on several different festivals last year (some roving, some not), giving me a few opportunities to see them, so it was odd catching them on a more standard band setting, but in a good way.

People were antsy as they waited for Nickelback. 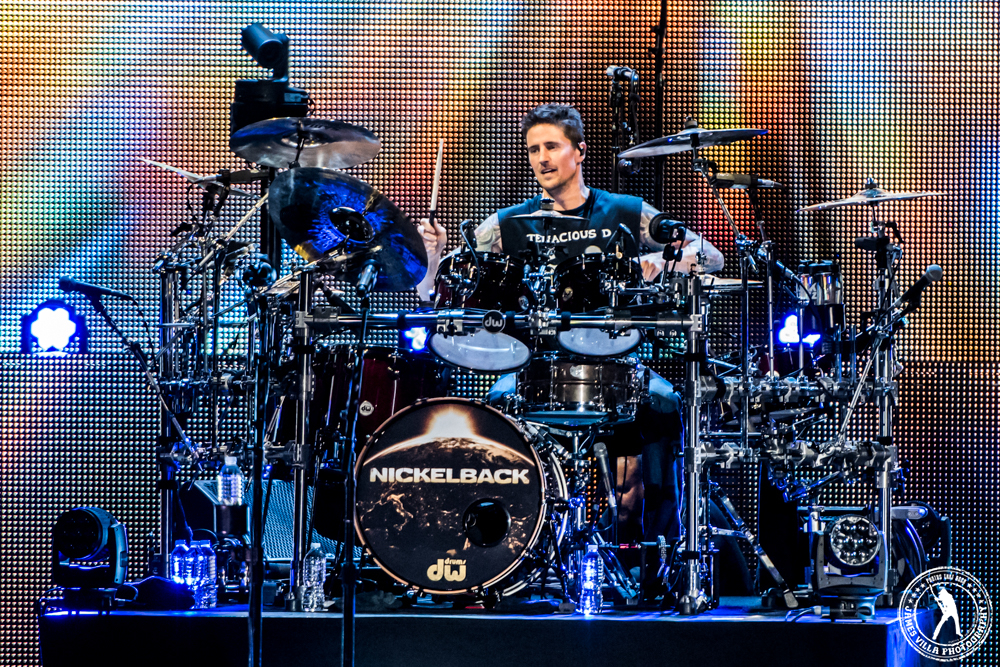 I, just like everyone else, was quite excited for this. I had never witnessed the band live; and I remember when “How You Remind Me” dominated airwaves, a few months prior to the release of Silver Side Up and even well after. This was bound to be good, right?

The house music suddenly cut out while the lights went out simultaneously. The fanfare was something else; and all of a sudden, Chad Kroeger, Mike Kroeger, Ryan Peake and Daniel Adair seemed to magically appear on stage.

With this tour being in support of their eighth studio album, No Fixed Address, the quartet wasted no time in ripping into one of the singles spawned from it, “Million Miles an Hour”. They were explosive right from the start, with that number being a commanding one; and when he could, Chad broke away from center stage and the microphone, wandering over to stage left, where he pointed out at the fans, an action that was greeted with cheers.

The singer was nothing but likable this night. As soon as that track concluded, he addressed a fan (or a few) close to the stage, saying they had lit their joint at just the right time, and before long, if they (the smokers) kept it up, the place would get turned in to a Pink Floyd concert. He kept on, though switched topics to how great it was to be in Texas, some place where it was warm, before diving into the lead cut off Dark Horse, “Something in Your Mouth”. 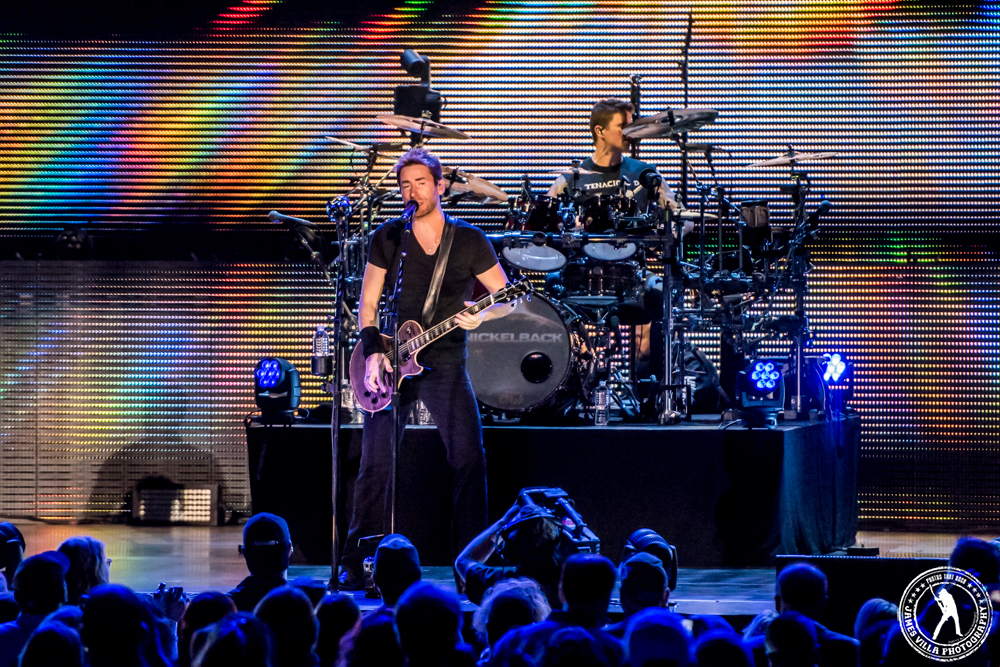 The audience sang along at times, as well as clapped on what was clearly a fan favorite of the night; and it was followed by the rock outfit slowing things down quite early, doing a sentimental number. I mentioned Chad was incredibly likable, just seeming very down to earth, as was seen again, when he joked that he wanted to hear as many people as possibly screwing up just as many words as he would be.

“Photograph” was the song, and a video montage accompanied it. It consisted of a variety of things. Just random happenings from the band members’ lives, though one I recall was one of the guys standing in front of two hippos mating.

They seemed to have everyone eating out of the palm of their hands, and really, how could you not have been? They were on fire! The songs were sounding great, but honestly, all this banter was fast becoming my favorite part of the performance. Like when Chad noted it was Friday, so everyone there surely had nothing better to do the next day other than “nurse a headache”, to mentioning how big the beers looked, asking if people ordered instead by asking for the one where they wouldn’t need to come back for two hours.

A sign in the crowd caught the singers’ attention a little bit later on. It was a couple holding it and it read something like they had flown from far away. They obliged, with “Far Away” just happening to be the next song in the set list; and in stereotypical concert fashion, a beach ball was seen being batted around until it ended up on stage, close to Mike, remaining there. 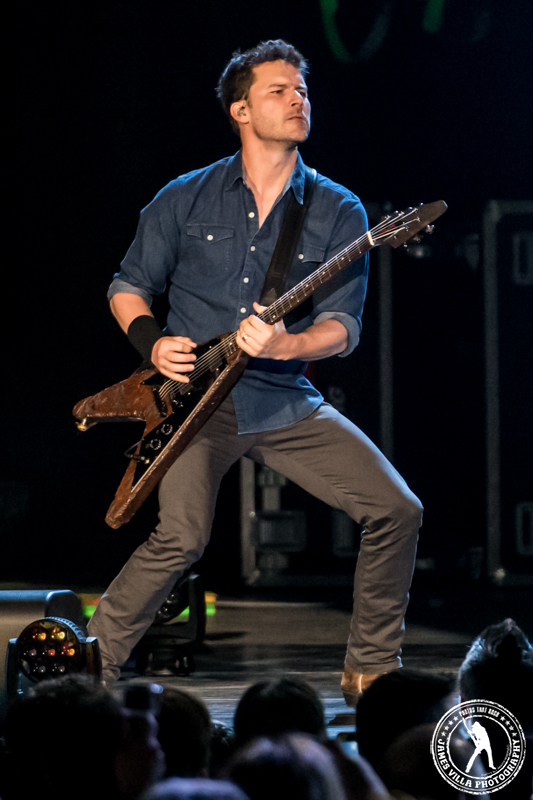 From a balled, they brought things right back up with another single, “Edge of a Revolution”, electrifying the fans, to the point the onlookers readily pumped their fists in the air and shouted along.

That brought them to something quite interesting. Something Chad was quick to admit they had lifted from the “best metal band of all time”, and you know the audience went wild when they heard him name Pantera. The bit they had decided to do from the iconic metal group involved throwing beers out at the audience. It was messy, but people were loving it as plastic cups with a few ounces of beer were chucked at them.

They kept up the originals, doing a few more, but then came some covers, first with Led Zeppelin’s “Moby Dick”, and not too long after a hodgepodge, consisting of Peake singing a bit of “Take it Easy” while Chad handled a snippet of “Hotel California”, both, of course, being Eagles songs. A bit of “Summer of ‘69” then capped off the fun segment.

They had a few more left, culminating with what else, but “How You Remind Me”. Everyone there seemed to lose their minds when they started it. I always like that, no matter who the band in question is. It’s their biggest hit. Of course, a band is going to play their biggest hit. Everyone in attendance knows it’s coming, but reactions like that, the pure euphoric feeling it induces, it just goes to show how beloved the song is. It means something to them; and I also liked the fact that Nickelback closed with that, instead of leaving it for the encore portion. It not only served as a solid ending, but also left you legitimately wondering if that was it or if there would be more. 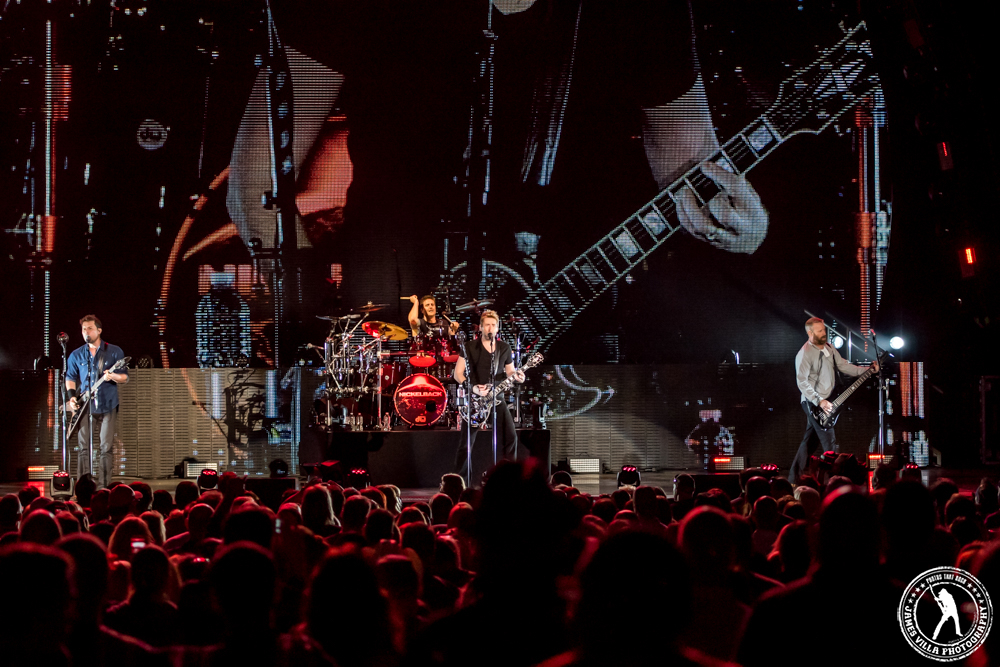 They tackled one more cover, this time picking something from Foo Fighters’ catalog (it was “Everlong”) before leaving the attendees with “Burn it to the Ground”.

That’s how you end a show.

Like I said, I was excited for this, but after all the years of hearing so many people take shots at Nickelback, I was equal parts skeptical. People can say what they want to, though.

The truth is Nickelback is a great band, and incredible when it comes to the live shows. You have to have something special to continue to play venues like this for so long, and they’ve certainly got it. Capturing everyone’s attention seemed to be second nature for them. That’s easy enough to do with rock anthems that get the blood pumping, but even the softer songs that were peppered in had no trouble invigorating people.

The stage persona was great as well, with the plentiful conversations between some of the tracks truly establishing a rapport between artist and listener. That’s hard to come by anyway, but especially with bands on this level. It made the experience all the more engrossing. The kind of concert experience you want to have again, and again, and again.

Everlong
Burn It to the Ground