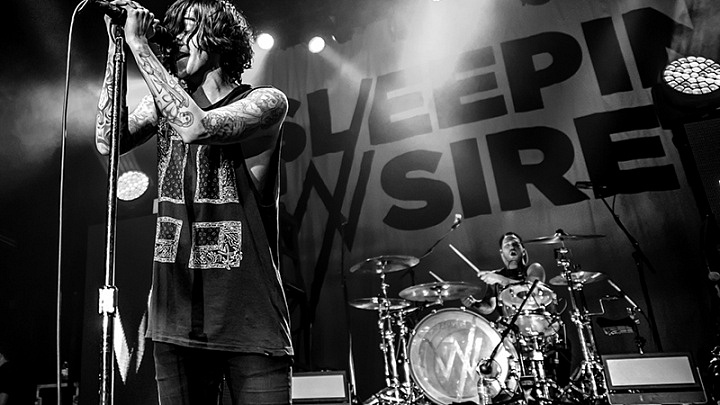 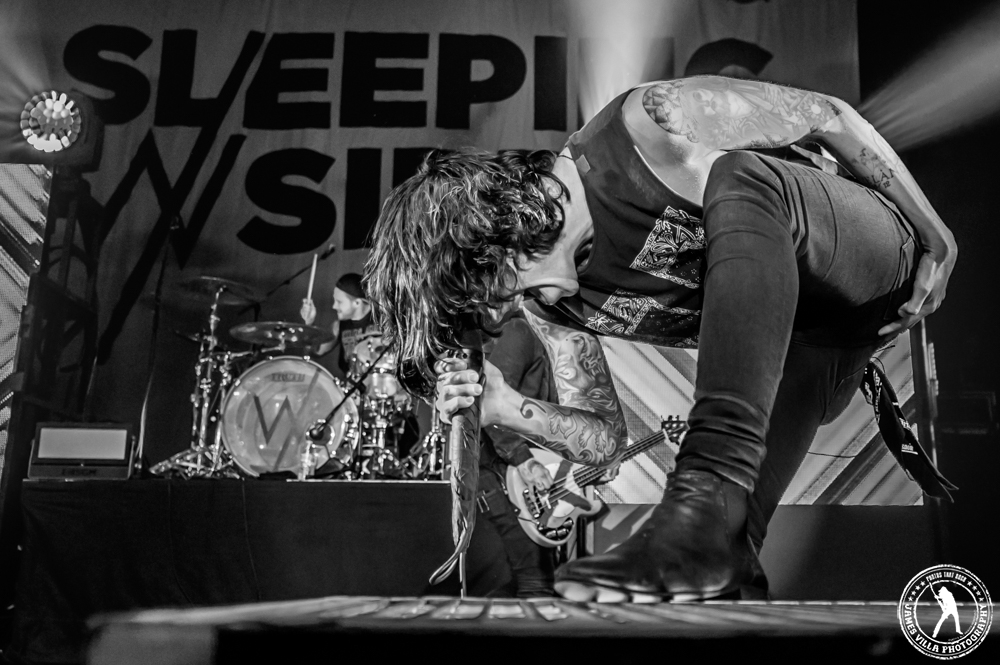 It was really hard to tell who people were more excited for this night at South Side Music Hall in Dallas.

The openers, Mallory Knox and PVRIS, were well received, though the undisputed kings of the night were Pierce the Veil and Sleeping with Sirens. Each had a throng of fans out, and while everyone was excited to see them together on a bill, it was clear every single person had a slight preference. But like I said, it was nearly impossible to make out a clear-cut favorite between the co-headliners.

With a new album due out in the next few weeks (Madness), Sleeping with Sirens had a few new jams to give the Dallas crowd, opening with what will be the lead cut from the album and their first single off it, “Kick Me”. A giant banner hung at the back of the stage bearing those words, and some visuals were implemented from time to time throughout the night, like now, when some of the words periodically popped up on them. It may be a new song, but the audience already seemed to know it by heart; and the confetti that spewed out from some cannons at the start helped in making things all the more fun.

Vocalist Kellin Quinn, guitarists Jack Fowler and Nick Martin and bassist Justin Hills were already going full throttle, setting up what was sure to be a stellar performance with that first song, moving all over the place and thrashing around. It captured everyone’s interest. They rolled it right into a cut from 2013’s Feel, and “Congratulations” explored more of the tricks they had up their sleeves, like when large clouds of smoke erupted towards the sky during an incendiary guitar solo. 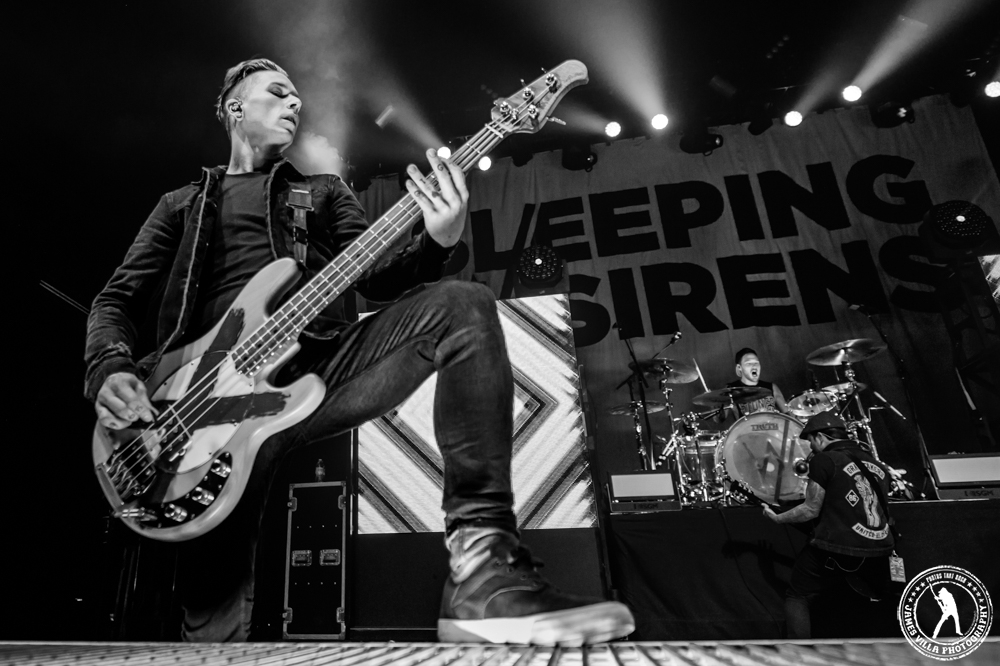 One song later, Quinn addressed the crowd, and the safety concerns they were having. So far this night there had been lots of pushing and shoving going on (so I heard. I was safe at the back). The first two bands had stressed how dangerous that could be, noting they didn’t want to have to stop this show, but if got to the point where that was the only option, it would happen.

The way Quinn put it made it crystal clear. He said that if the bands came out to see a crowd perform, do a mosh pit, crowd surf, etc., then they, the fans, would be the ones on stage and the bands would be in the spectators sport. Obviously, that’s not how it is, and I think that put it in perspective for everyone.

He then dedicated “Low” to anyone who was here with their best friend, saying there are things you’ll tell your best friend that you’d never dare tell anyone else. It was easily the most intense song up to this point, with the energy level matching it, with plenty of jumping and running about going on.

“A Trophy Father’s Trophy Son” got some wild applause and cheers when it was announced as the following track. Much of the audience had their phones in the air during it (I even saw an iPad); and everyone was eager to sing along at times when the reins were turned completely over to them. It was a neat moment, hearing even the instruments fall mostly silent before the collective voice of the crowd rang out. 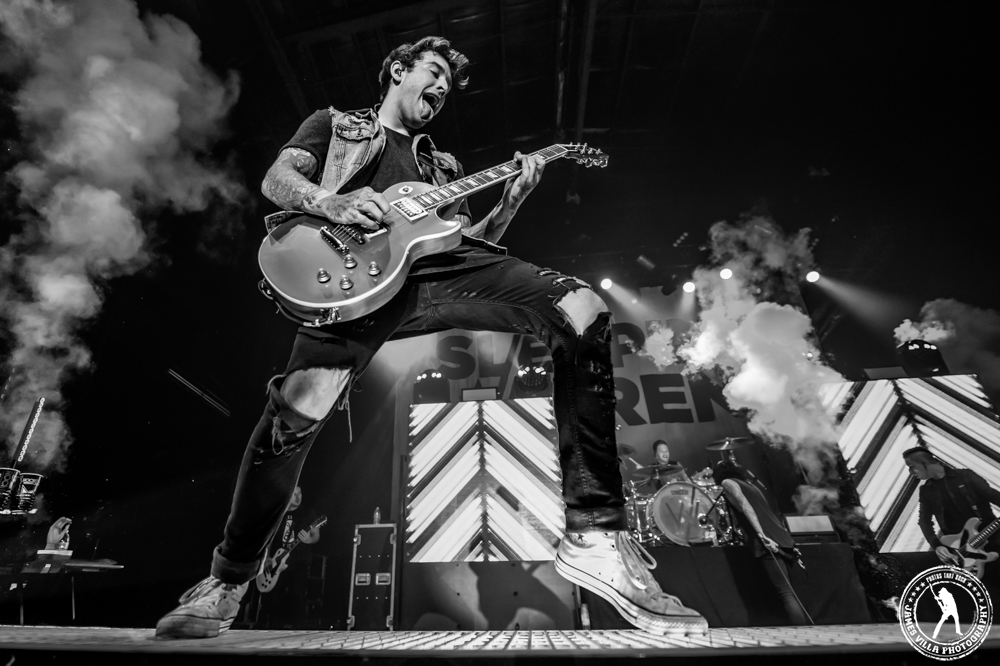 They were also pretty vocal during the softest song the band did this night. A track Quinn pointed out was about being yourself and how when you have inner confidence, it doesn’t matter what anyone else may think of you. They switched to an acoustic format for “Scene Two: Roger Rabbit”, keeping it going with a surprising take on a 90’s alt rock classic, “Iris” by Goo Goo Dolls. Actually, even more surprising was how everyone rejoiced when they started it. Some of the people singing along looked like they were probably only a few months old when that song hit airwaves back in 1998, yet since SWS has recorded a version of it, they knew every last word.

That’s possibly one of those songs that shouldn’t be covered, either, at least not unless you’re absolutely sure you can do it justice. And while it doesn’t fit the traditional Sleeping with Sirens mold, they put a killer spin on it.

As they got back to their normal setup, they prepared for a couple more new offerings. “Jack’s gonna teach you how to play it on guitar right now,” Quinn said before the guitarist surged into the spotlight with some intricate licks. Martin got plenty of attention, too, crowd surfing for a bit, which definitely excited everyone. Quinn then used a megaphone for parts of the next one, resulting in a good effect. 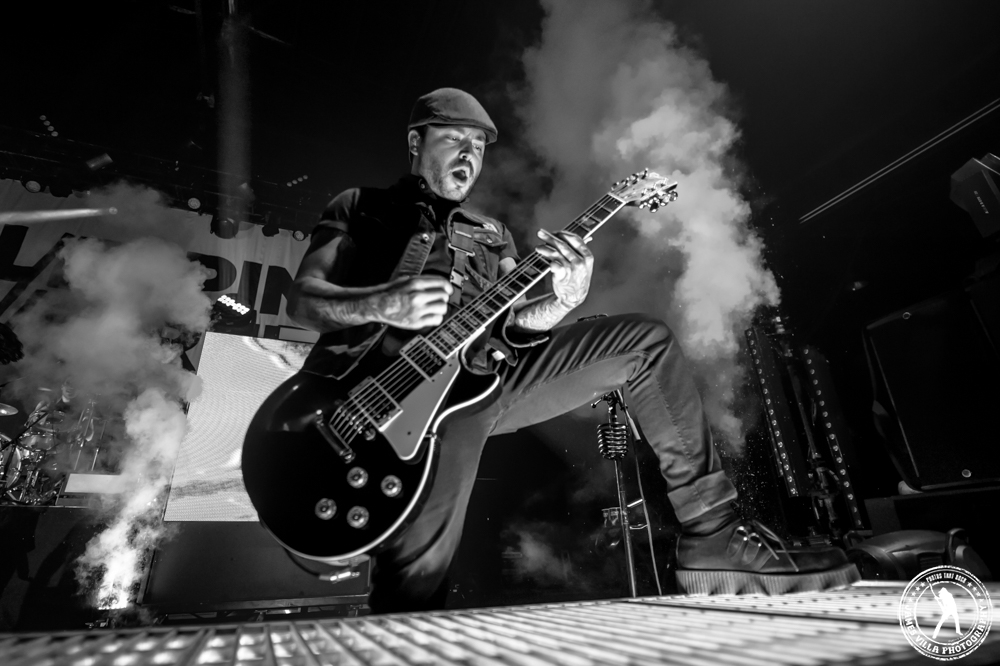 “If I’m James Dean, You’re Audrey Hepburn” got them back into their rock mode, before they closed out their 49-minute long set with the pulse pounding “If You Can’t Hang”. As he had been all night, Gabe Barham was the backbone of that song; and at one point, things fell silent, as Quinn requested everyone shine their phones on them, even asking for the house lights to be turned down so he could see everyone. “Thank you, from the bottom of my heart,” he stated, launching into a conversation about how amazing it was they had been able to do all this without the help of a major label, praising the fans for telling their friends about them, citing that as the reason they’ve gotten where they are.

They then tore back into the song, finishing it, before leaving in a patriotic fashion as “The Star Spangled Banner” played over the PA system, while confetti again rained down on everyone. It was an unforgettable way to leave.

To be honest, I’ve never listened to much of Sleeping with Sirens music. Their sounds had a broad appeal, though, quickly drawing me in with the explosive songs and a performance that was unrelenting.