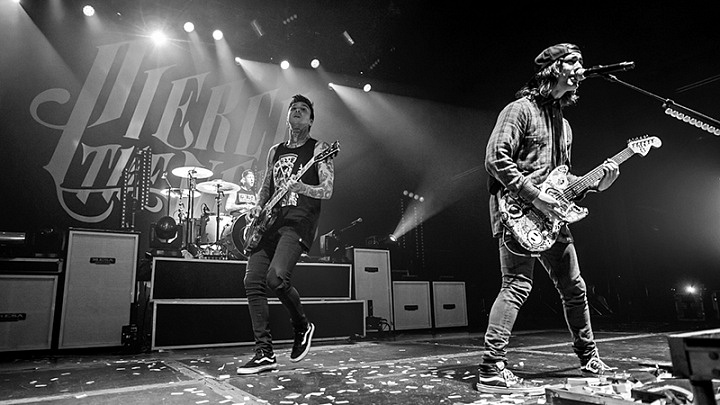 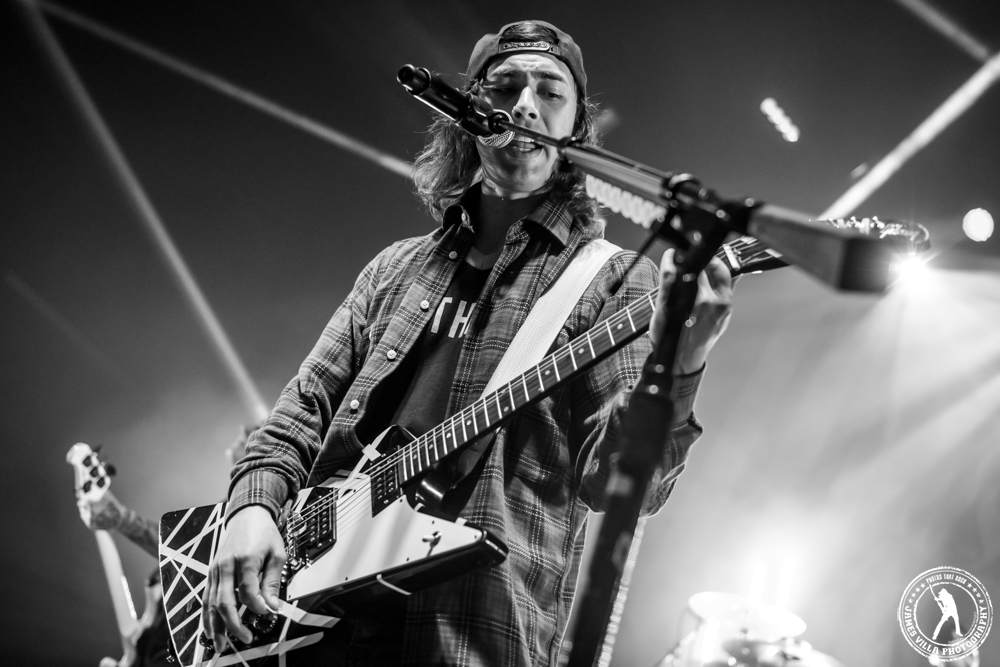 No sooner had Sleeping with Sirens left the stage, and then a massive banner was hoisted up. It covered the stage and bore the logo of Pierce the Veil. It was enough to send the crowd into a fit of excitement — something that had happened often this night, like each time a band took the stage, and numerous times throughout the set from the first of the two co-headliners.

The show here at South Side Ballroom in Dallas had sold-out fairly quickly after the two post-hardcore powerhouses had announced their tour together; and some fans were apparently so excited for this they started lining up at six in the morning. That’s what a security guard told me at least. Keep in mind we had had a cold week in Dallas, with temps finally just getting above freezing and into the forties on this day.

Inside was packed. The sprawling area in front of the stage already saw people standing shoulder to shoulder at 6:30, while the elevated portions around the bars were crowded, too. Some young teens had been brought to the show by their parents, others had dropped their kids off; and, of course, there were plenty of twenty-somethings supporting as well.

It was right at ten when the lights dimmed; and some lights shone from the back, illuminating the silhouette of each of the four members.

A lot of anticipation had gone into this, and as the banner dropped, the onlookers were finally able to immerse themselves into the show and just savor it.

Singer and rhythm guitarist Vic Fuentes had barely sung the first line of “Hell Above” when tones of confetti exploded out of several cannons. It was so thick for a moment that from the back, you couldn’t even see the stage. That immediately set the tone for the night. The San Diego-based outfit was all about having a good time. 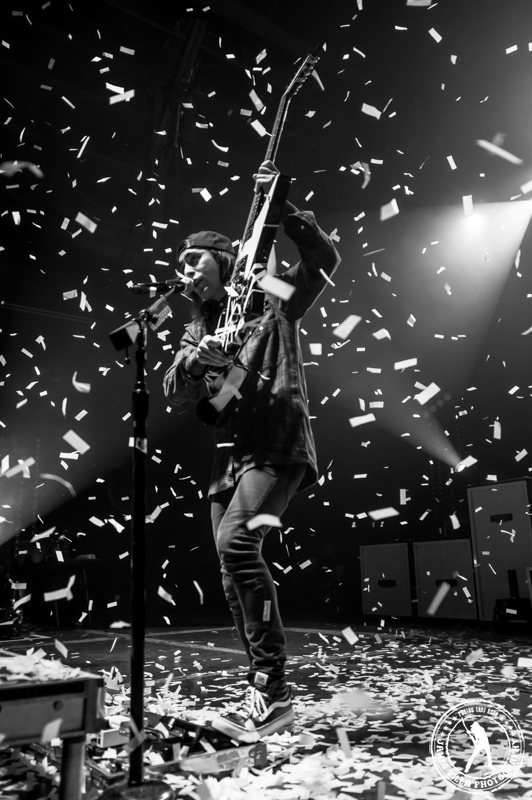 “Is this Dallasss?!!” Vic roared in a somewhat throaty tone, before his brother, drummer Mike Fuentes, fired off some quick fire beats, taking them into “Caraphernelia”. The track from 2010’s Selfish Machines seemed to be what everyone was wanting. Mike stood from his kit after the first chorus, trying to further pump up the crowd, which also found Vic encouraging everyone to jump around with them. The fans even had some parts turned over to them completely, like the closing line that everyone chanted/sung, “What’s so good about picking up the pieces?”

The guys stopped to ready their next song, something the audience wasn’t too keen on. Repeated chants of “Pierce the Veil!” filled the room. It was crazy. There are very few bands I can think of that I’ve seen who have been shown love to this magnitude. And so early on no less, I mean, they were barely getting warmed up. It didn’t take them long to deliver another song, beginning a bombardment of tracks as they went straight into “Disasterology”, barely even allowing enough downtime for the spectators to applaud.

If they hadn’t gotten there before, than things definitely went into overdrive with that explosive number. Perhaps the best part was the ominous end they gave it. Lead guitarist Tony Perry had been brilliant on that one; and as it concluded, he removed his guitar and stood there while thunderous applause and cheers were sent his way.

The transition to the next one was seamless, though they prolonged the guesses as to what it could be with a lengthy instrumental piece/track. It was rather wavy, washing over you, affording Vic time to dedicate it to everyone who was there just “for showing up” he said, adding how amazing the audience was. The crowd was then elated to find out the song taking shape was “Hold On Till May”, yet another one they all passionately sang along with. It was made all the more fun by several hundred (or even thousands) pieces of confetti raining down on everyone, this time near the tail end of the track. 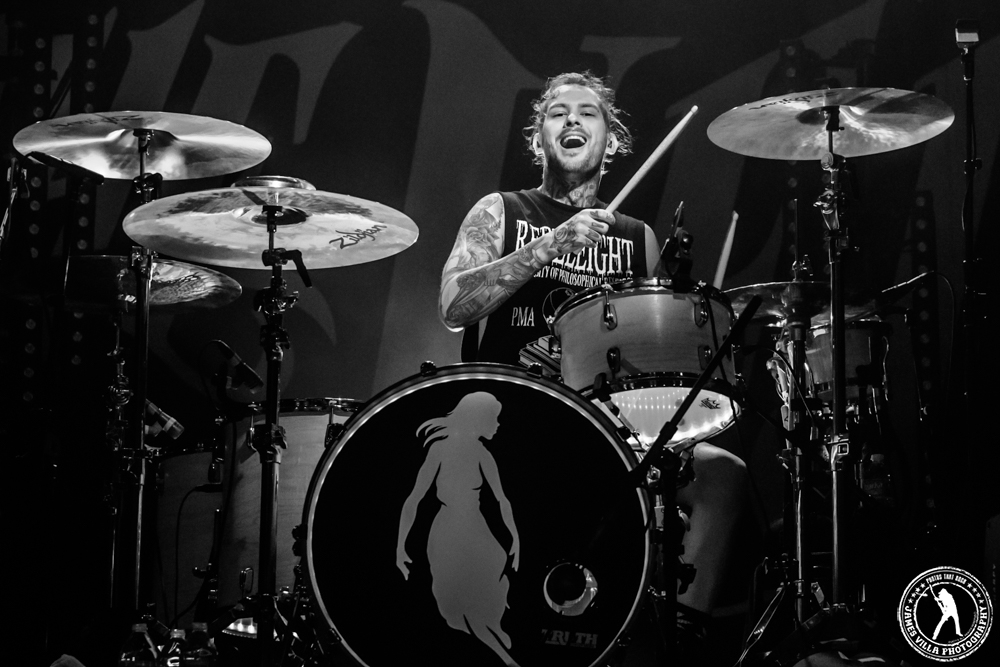 Each song was a building block, captivating and pleasing the fans even more so than the last. That was seen as they segued into the next one. A collective scream was heard when everyone heard the chords Perry was playing, knowing it was “Props and Mayhem” from Collide with the Sky.

The stage was pretty dark after that, and it appeared as if everyone left. It was too early for things to be over just yet. Vic was still on stage, though, acoustic guitar in hand. Pierce the Veil is not a band you think of when it comes to acoustic songs, yet they have some in their catalog. Well, some that can work in that setting, at least.

I don’t know what it was, but seeing Vic alone on stage like this seemed to allow his persona to shine through more. I guess it was probably because he actually had time to address the audience, saying that something happened when they got to Texas, and all their shows here so far had been pretty rowdy (all the bands this night were constantly urging the fans to not push and shove to ensure no one got hurt.) He sounded very chipper, smiling at everyone as he asked if it was okay if he broke things down for a bit, stressing the only stipulation for when he does acoustic songs is he loves the audience to sing along. People were okay with that.

He kept the crowd on their toes’ during “I’m Low On Gas and You Need a Jacket”, pausing before the second verse, joking that he was “testing” everyone about the singing part. They didn’t follow through then, but later on they did. “Do we even need to finish that song?!” he asked right near the very end, after the fans had handled several lines. The response was a resounding yes.

They were almost done, picking things back up as Mike, Perry and bassist Jaime Preciado returned to the stage; getting some more fan participation going during another track, before ultimately ending with “Bulletproof Love”. The room was just a sea of hands when Vic mentioned that this was his favorite part of the night, because he was able to get one fan and bring them up on stage, eventually choosing a young girl whom he sang the first couple lines to before she was led offstage. 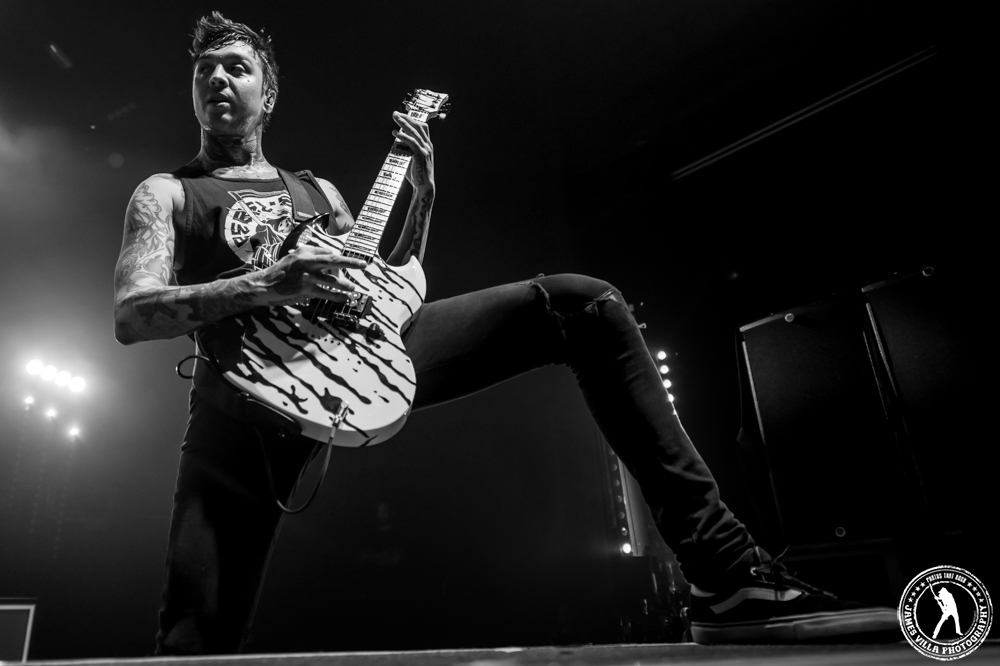 Just judging from responses, there had been plenty of well loved songs performed this night, though it was this one that seemed to be the clear favorite. The enthusiasm reached a whole new level, with the collective voice of fans constantly rivaling that of the band, who had some powerful speakers on their side.

Their set only clocked in at 54-minutes, but it had been a wild and crazy 54-minutes, chocked full of action.

No one wanted this to be over. The chants for an encore were proof of that; and many of the young fans were already sporting the tour shirts of this joint world tour Pierce the Veil and Sleeping with Sirens are on.

It took some coaxing, though they did come out for one last song. It was unquestionably the heaviest one they did this night. A good upside of touring with Sleeping with Sirens is that their singer, Kellin Quinn, is on hand, making it pretty easy for him to sing with them on a song that features his talents, “King for a Day”. Any pent up energy fans were still holding onto was let out then.

I think people would have been fine if they had done another ten songs, but still, that was quite the way to finish a show. And it did leave you wanting more.

The entire time the four of them had the stage things were moving at a nonstop pace. Preciado and Perry were constantly moving around, racing from side of the stage to the other and rocking out. Even Vic did the same, when he could at least; and Mike may have been stationed behind the kit, though he was a beast, putting a lot of style and flare into his actions, too.

It was a solid performance, one that left everyone amazed. And for someone like myself, who wasn’t too familiar with PTV before this, it made me into more of a fan.