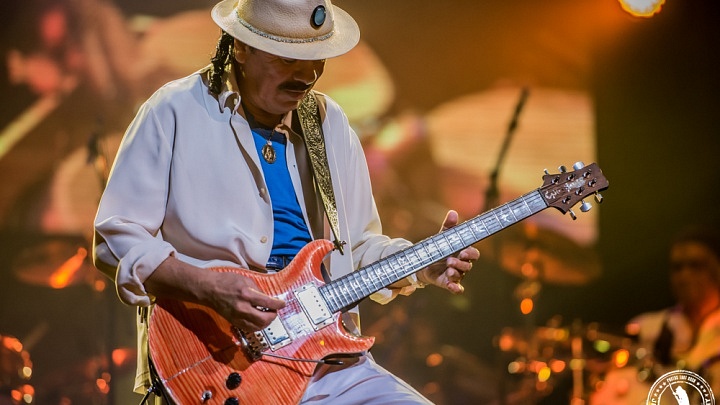 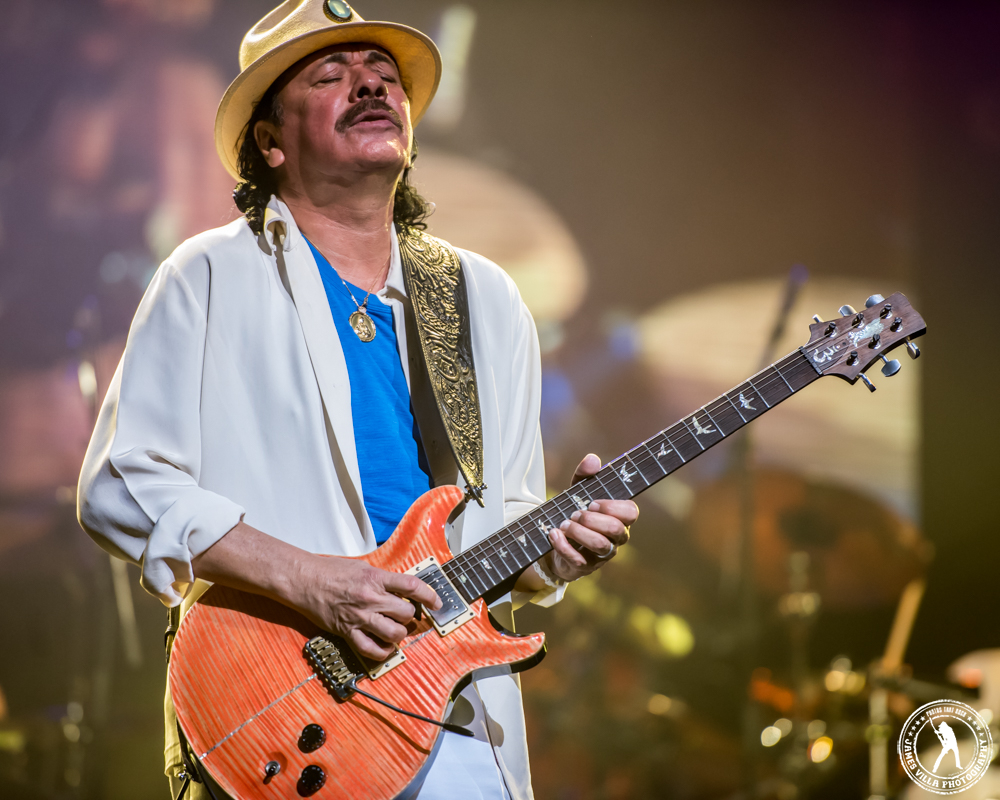 Thirty minutes before show time and people were still filing into the Verizon Theater. Inside, things were already packed, and they were only going to get more so as people of all sorts of demographics took their seats.

The reason for this was because of one of the legends still in music, one of the few musicians who can be known by only one name: Santana.

People were ready for this, and it looked like they had been for quite some time.

It was 8:09 when the lights began dimming and the fanfare erupted, with people knowing just what that meant. “There he is!!” I overheard a guy sitting in front of me say, pointing out Carlos Santana to the group of people he was with. The man of the hour hung in the shadows, dressed in white, as his percussionists began an intro. There were four of them, between a traditional drum kit, one that was primarily bongos and a couple others. They had their time, before Santana himself finally strode out on stage, letting his skills take over as he delivered a brief, fiery solo in advance of “Toussaint L’ouverture”.

The one thing that sets a Santana concert apart from most is you don’t just go to hear the songs. That’s not even the main reason to go in my opinion, the main reason is to marvel at the musicianship, which was on full display from the get go. Of course, Santana was getting the bulk of the attention, and rightfully so, as he is a true master of the guitar; even abruptly bending his knees at one point as he wailed on it.

They hammered out the songs this night, often going from one right into the other; and one of the two frontmen that comprised the band got a clap along going as they began one of their Latin-rock songs, infusing with some soul. The whole band got their time to shine this night, like a few songs later, when the vocalists and Santana bowed out to let the main focus shift to the keyboardist for a solo, which was eventually followed with another stellar guitar solo from the legend himself.

The crowd was applauding wildly, something Santana brushed off, instead pointing to his band mates; clearly saying they were the main ones deserving attention. “Black Magic Woman” was easily the most well received song thus far in this young set, eliciting some strong roars of excitement; while their rendition of Tito Puente’s “Oye Como Va” was another favorite, even resulting in a couple middle-aged woman sitting in the row in front of me standing up and dancing about, as best they could at least, given the little room they had.

“Thank you for being here,” Santana said afterwards, speaking for the first time this night (which had found him adding minimal backing vocals so far). “We have this wish to make this the most memorable experience for you guys,” he added. They were already well on their way to achieving that, and “Maria, Maria” helped make that wish of theirs more of a reality. 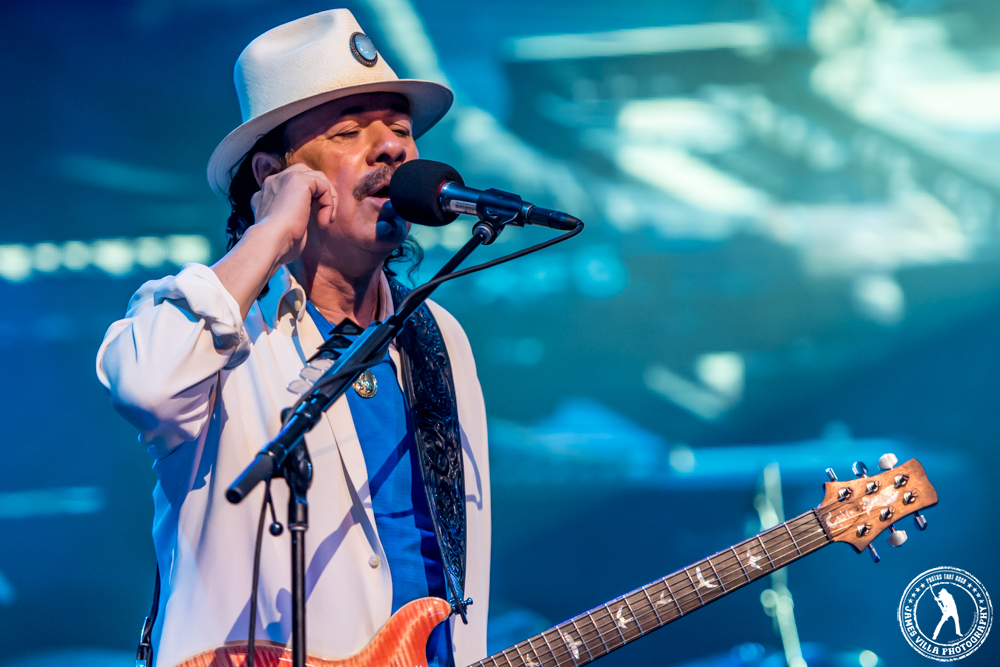 “Can you tell we’re not lip-synching?” he asked after finishing that one, chuckling a bit. Yeah, this was all natural; and the fact that they were using their God-given talents was making the performance all the more powerful. A barrage of songs followed, some playing to their prowess as musicians, being largely instrumental, others involving some singing. One boasted an amazing drum solo from Cindy Blackman that stretched on for a few minutes; while the rest continued to have different groups of fans scattered all over the theater screaming their approval.

“No One to Depend On” was another highlight this night; and it was followed by a cover, but first, Santana had to set it up. He said this cover had only been done for the first time at their show the night before, and he seemed really happy about how it turned out, and chomping at the bit to do it again. He dedicated it those who lost their lives far too early in the Oklahoma City bombing in 1995.

“…We want peace on earth. Stop the stupid shit,” he instructed, speaking rather bluntly, though the sentiment was something everyone agreed with. He stressed that this wasn’t about all agreeing to follow one particular religion or anything, nor what sex or race you belonged to. “Just don’t be violent or destructive,” he asked. It’s such a simple premise, yet sadly, one so hard to follow. He was about to say what the song was, having just gotten so caught up in his conversation, before stopping himself, saying everyone would know it when they heard it. Sure enough, “Let There be Peace on Earth” was unmistakable; and they put a fun spin on it, while keeping the message intact.

They had been on stage well over an hour by this point, and showed no signs of stopping anytime soon.

When it came a few songs later, “Blackie Joe” became another excellent offering from this night, with Santana delivering some superb moments, not in the form of a guitarist, but in just being a human being. Early on in the song he moved from his spot over on stage right, up to the edge of the stage on the stage left side, giving a pick to a young girl (a few songs later he let the same girl strum his guitar a time or two. What a privilege!); and he even grabbed a phone from one woman who had walked up to the stage, pointing it out at the crowd for a second, before acting as if he were about to drop it into his back pocket (or perhaps even his pants), laughing as he soon handed it back to her, letting her know it was all in good fun. 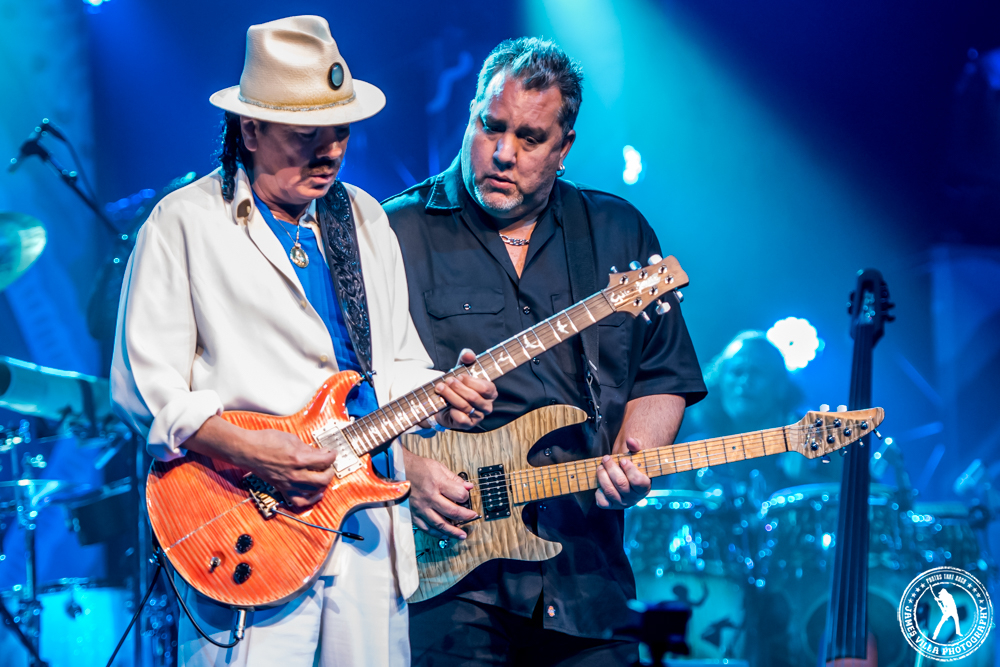 It was during “Evil Ways” that things tapered off once again, allowing Santana to again address his fans, saying he didn’t want to tell anyone what to do, as that would be an “imposition”, though he invited every single person to look into the mirror and tell themselves that they are significant, beautiful and can make a positive impact in the world. He went on to say that that is a hard thing to do when it comes to ourselves, even if we always praise friends and tell them such things, because, the gist of it anyway, is because people are caught up in sin, or at the very least, the idea of it. “…God is only two things: light and love,” Santana stated, calling anything else “Godzilla”; and he named off each major religion along with their respective deities, saying each of them had died in order to “teach us to take our own.” “So take it,” he finished, as things roared back to life.

This 143-minute long set was then capped off with what is easily one of the biggest songs of all time, “Smooth”. That was the first Santana song I ever heard, being only ten when it hit airwaves back in 1999, dominating the charts; and people went crazy over it, with nearly everyone singing along, many of them even standing.

People began to leave, though the lights never came back on, signifying that an encore had to be coming. It was hard to believe that they still had anything left in the tank after that, but they did.

Two songs were left, the first of which was “Soul Sacrifice”, while a great take of the band Skank’s “Saideira” finished it out.

The sheer fact that they played so long was astounding. So few bands do that, but Santana and company made every single penny every person in this room had spent well worth it. They never seemed to tire, despite seldom having a chance to catch their breath, and their respective skills… It was simply amazing.

It’s so hard to stay relevant in the music industry, with anything beyond a decade lifespan for a band being quite an achievement. Sure, musicians as individuals may last longer, if one band dissolves starting another or something, but even that’s hard to do. Yet here’s Santana, having managed to be a staying power for nearly five decades. That’s a remarkable feat, and even more amazing is the fact that such a wide range of people still flock to see him. I was far from being the only mid twenty-something there this night; and not a soul seemed out of place. There was a peaceful feeling in the air, so only if it were in that one room for just a fleeting moment, I do think Santana caught a glimpse of that wish he had made known earlier.

Toussaint L’Overture
Give It Up or Turnit a Loose / People Are You Ready
(Da Le) Yaleo
Black Magic Woman / Gypsy Queen
Oye como va
(Tito Puente cover)
Maria Maria
Foo Foo
Corazón espinado
Jin-go-lo-ba
(Babatunde Olatunji cover)
Hope You’re Feeling Better
Europa (Earth’s Cry, Heaven’s Smile)
Samba pa ti
Batuka / No One to Depend On
Blue Train / A Place with No Name
Everybody’s Everything
A Place with No Name
The Way You Make Me Feel / If Anyone Can
Se a Cabo
Blackie Joe
Incident at Neshabur
(included a blues jam)
Evil Ways / A Love Supreme
Smooth