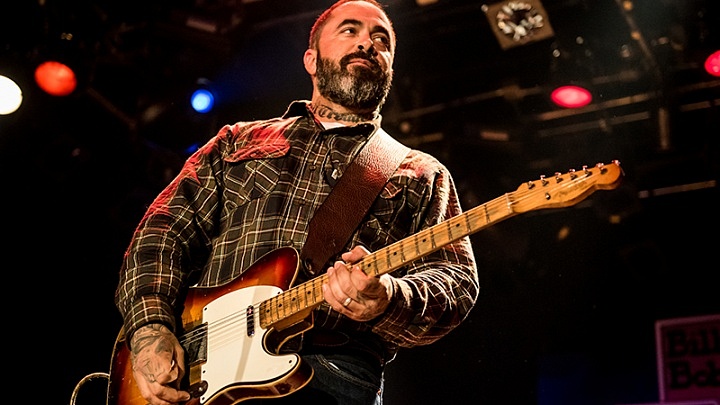 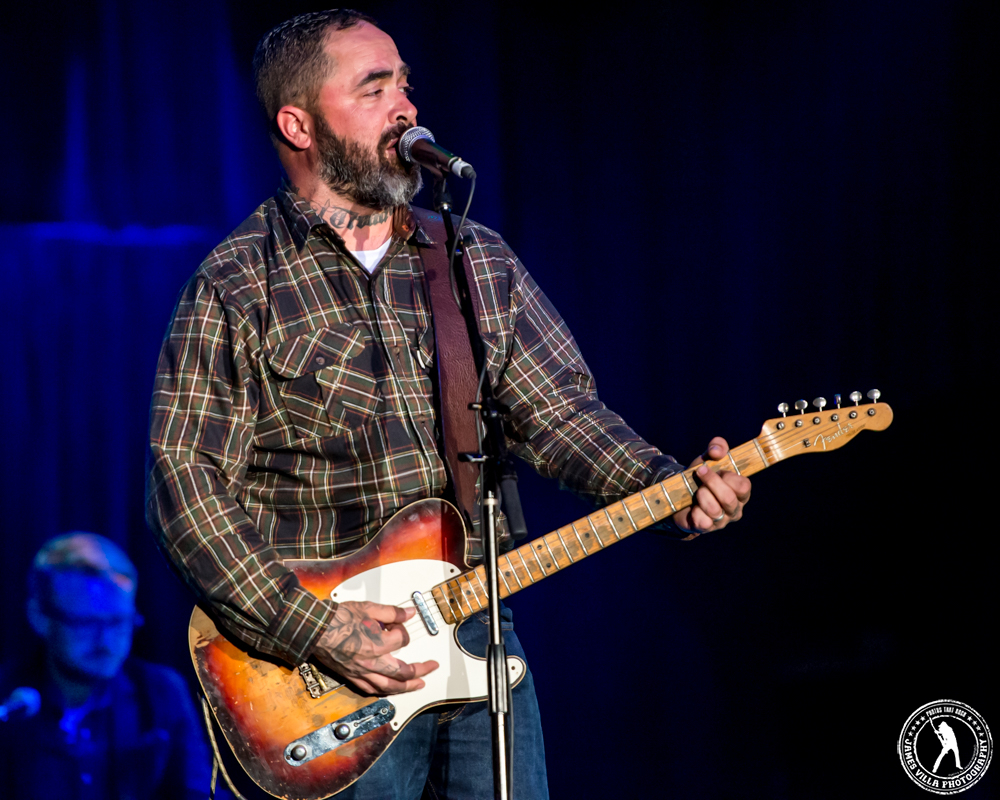 The singer best known for fronting Staind was stopping by the world’s largest honky tonk supporting his debut solo album, The Road, which he released a little over two years ago.

To be honest, I’ve never listened to much Staind. I was but a kid when they got started; and when I did begin getting more into music, it was classic rock at the time, so they were just never a band that I listened to extensively. That said, I had also never listened to any of Lewis’ solo material; though when the opportunity came up to come check out this show, how could I pass that up?

The place was pretty lively. Not sold-out (that’s hard to do anyway as big as this venue is), but still bustling. Some patrons were decked out in the normal attire, wearing cowboy hats and more western clothes, while others were sporting short sleeve shirts with various company logos on them, the likes of which aren’t normally seen there. Lewis was attracting fans from both his long running rock career and his newer country style. 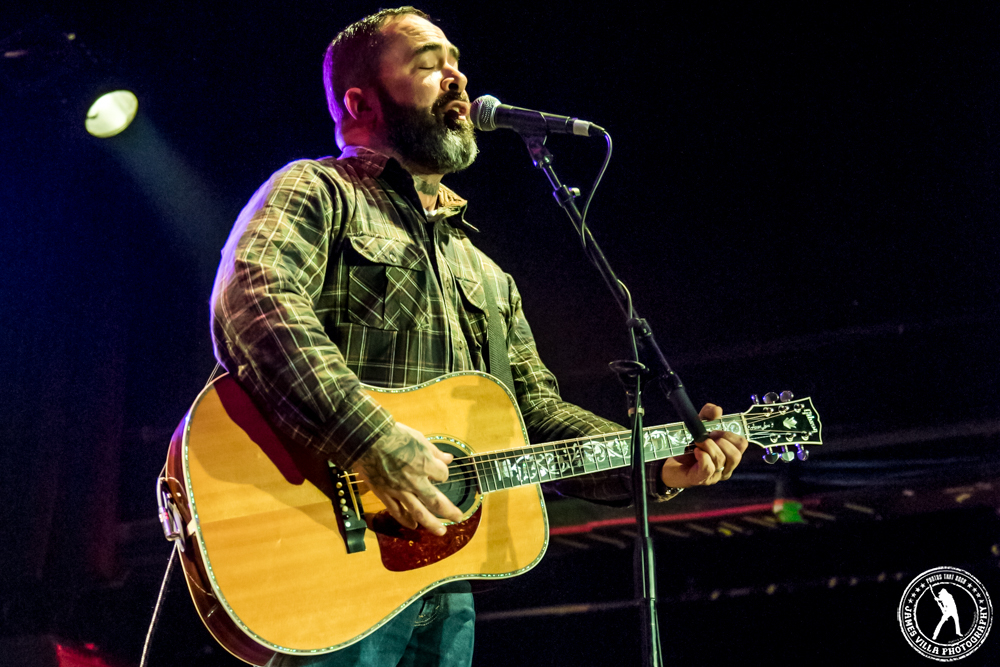 Lewis’ band was first on stage, launching into an instrumental piece, before the singer eventually made his way on stage. It was then when people went ballistic, applauding and cheering their hero. The first words from his mouth were The Pledge of Allegiance, something much of the audience recited with him, before officially getting things underway with “Country Boy”, changing the lyrics slightly, specifically a line early on about drinking and smoking, to, “I might drink a little whiskey, but I don’t smoke weed.”

“How is everybody this evening?” asked Lewis afterwards. He kept the dialogue at a minimum this night, opening up occasionally, though there would be no real conversation until late into the night.

I said all that about never listening to any of Lewis’ music, and I was shocked that not only was what he was doing country music, but authentic country music. Real country music, before much of the genre became glorified pop (I’m not even saying there’s anything wrong with what mainstream country is, but let’s call a spade a spade.) Even the lyrical content had that gritty, honest style of songwriting, reflecting a small town, simple life, like on “Granddaddy’s Gun”; and the few liberties taken during “State Lines” (like mentioning Fort Worth by name) sent the crowd into a frenzy.

He did a couple more from The Road, though Lewis was well aware of the fact that people weren’t here just to hear this country stuff, as incredible as it is. The music bed was just slightly different as it led in to one song, giving Lewis the element of surprise, right up until he sang the first line, “I know I’ve been mistaken.” The onlookers went wild upon realizing it was “Right Here”, which would be the first of a good selection of Staind songs this night. 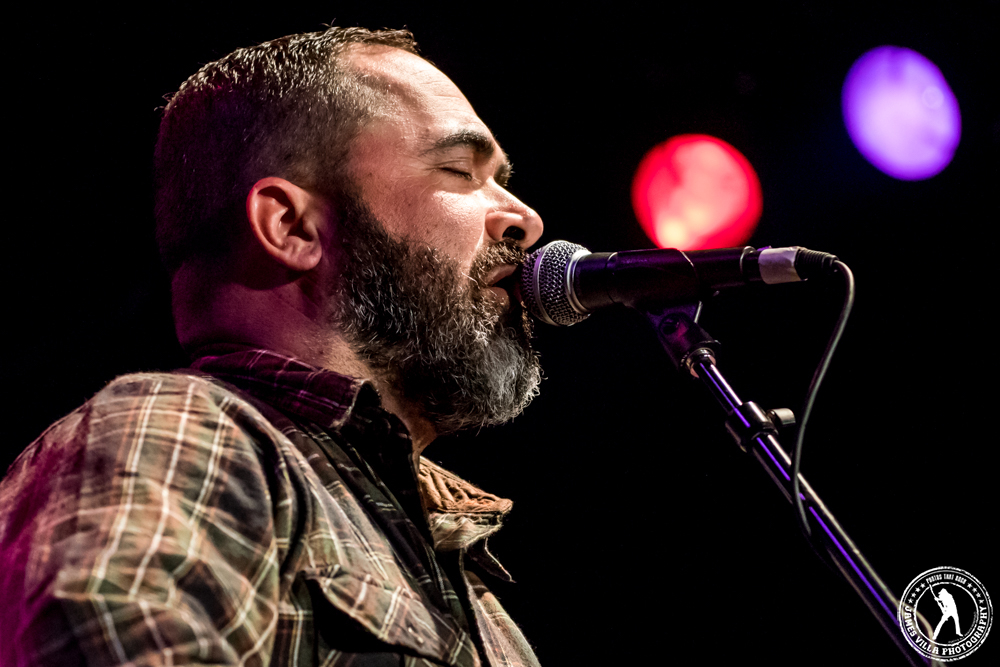 Actually, it was the first of two straight. His band left for a few numbers, and first he pulled out “Mudshovel”, doing an alternate version that certainly wasn’t as heavy as what fans are familiar with, yet they loved it all the same.

“Play Mudshovel!” someone shouted once it was done. “That was Mudshovel, I just played it for you, asshole,” Lewis responded, somewhat joking with the person. The conversation started picking up then, generally speaking, as he urged the onlookers not to take offense over the next song, saying we were the same, regardless of if we’re from the north or the south. “There are rednecks north of The Mason Dixon Line,” he said, which also happened to be a line from the next song, which I’m presuming was a newer one.

It was really good, fitting the mold of his solo music well, as did the next one. “Lost and Lonely” it was called, and it was a new song. “…I’m an albatross hanging around my own neck…” went one of the lines from the somber love song. “She’s All Lady” by Jamey Johnson acted as a nice follow up to it, as Lewis even seemed to evoke a bit of Johnson’s sound as he performed the song about being tempted to, but never straying from a relationship.

His drummer, pedal steel guitarist, guitarist and bassist then returned as they knocked out the title track from his first LP, before getting into a more patriotic mood with “Red, White and Blue”. “I’m proud as hell of where I’m from!” stated Lewis, saying that was the reason he had written the song; delivering some of the final words in a stunning a cappella format. 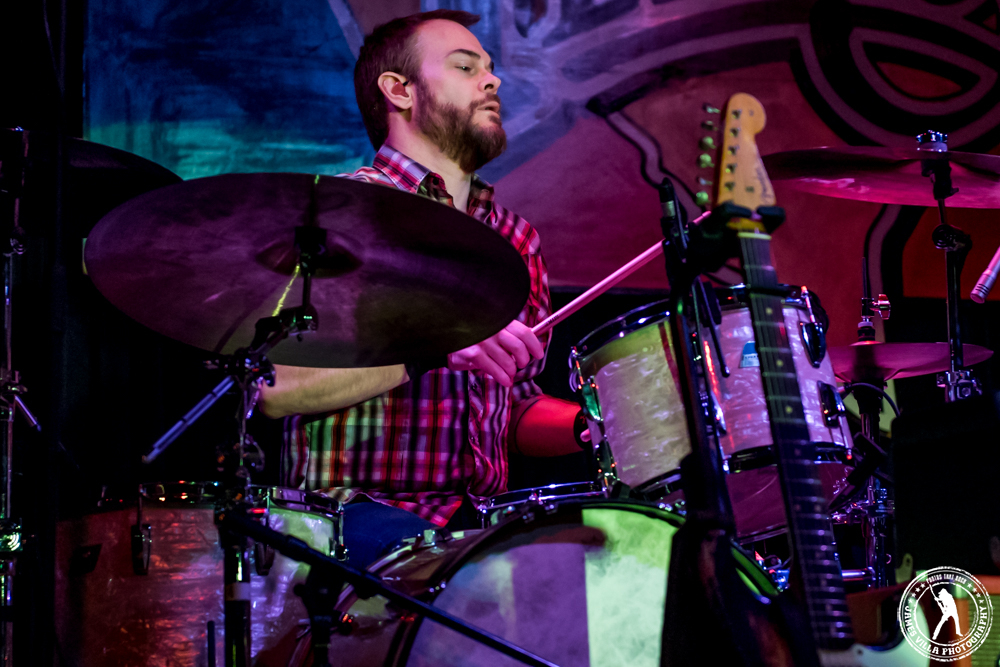 A sweet balled came in the form of “Tangled Up in You”, appealing to the hearts of all the romantics, while the next one catered to the party people. “I wrote this next song ‘cause I know I’m going to hell,” Lewis said bluntly, raising a toast to it before “Party in Hell”.

Given the fact that that song names some notable country musicians, the next conversation was rather appropriate, as Lewis touched on how screwy country radio has become, with not much country to be heard on the airwaves these days, which was what “That Ain’t Country” was about. “I better see some two-stepping going on back there!” he commanded, speaking to all those who weren’t seated at a table. I’m sure there was some, too.

The show had lasted quite some time, with it clocking in at 93-minutes by the time this next song was finished. You knew it was going to be good when the singer mentioned he had written it over twenty years ago, but what could it be? 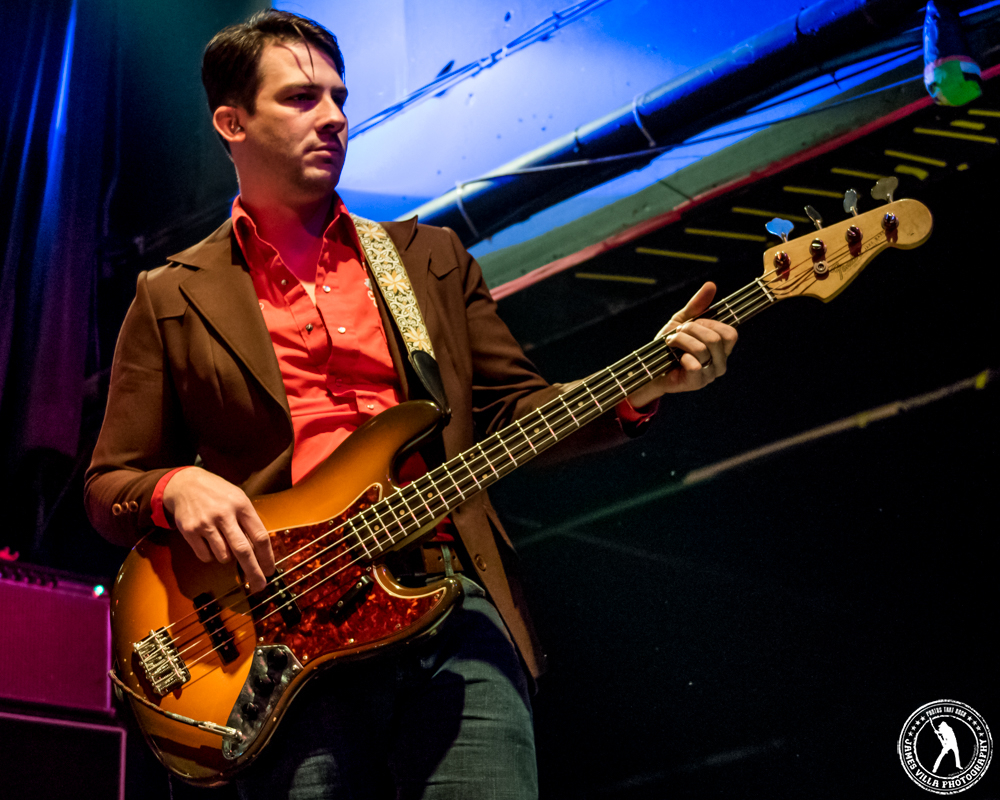 Even without his band mates from Staind up there with him, “It’s Been Awhile” was still a powerhouse song. A lot of people stood up, or at the very least thrust their arms into the air as they sang along to the classic. “It’s been awhile,” Lewis sung towards the end, suddenly ceasing singing. “Since I’ve said thank you, Fort Worth,” Lewis finished, exiting at that, while the band wrapped it up.

There would surely be an encore, especially the way the crowd was acting. In all seriousness, if there hadn’t been, I wouldn’t have been surprised if a small-scale riot might have broken out. That’s how rabid much of the crowd was at this point.

Lewis did return, solo and with his acoustic guitar back in hand, saying he was going to start slow and build up to some heavier stuff, beginning with his song about not letting the subtle moments slip by, “Lessons Learned”. “I wrote this song a long time ago,” he then stated in advance of one Staind song that really fit this acoustic setting well, “So Far Away”.

Two songs in an encore is doing pretty good, so I was thinking the next one was probably going to be it. Or at the very least, next to last. 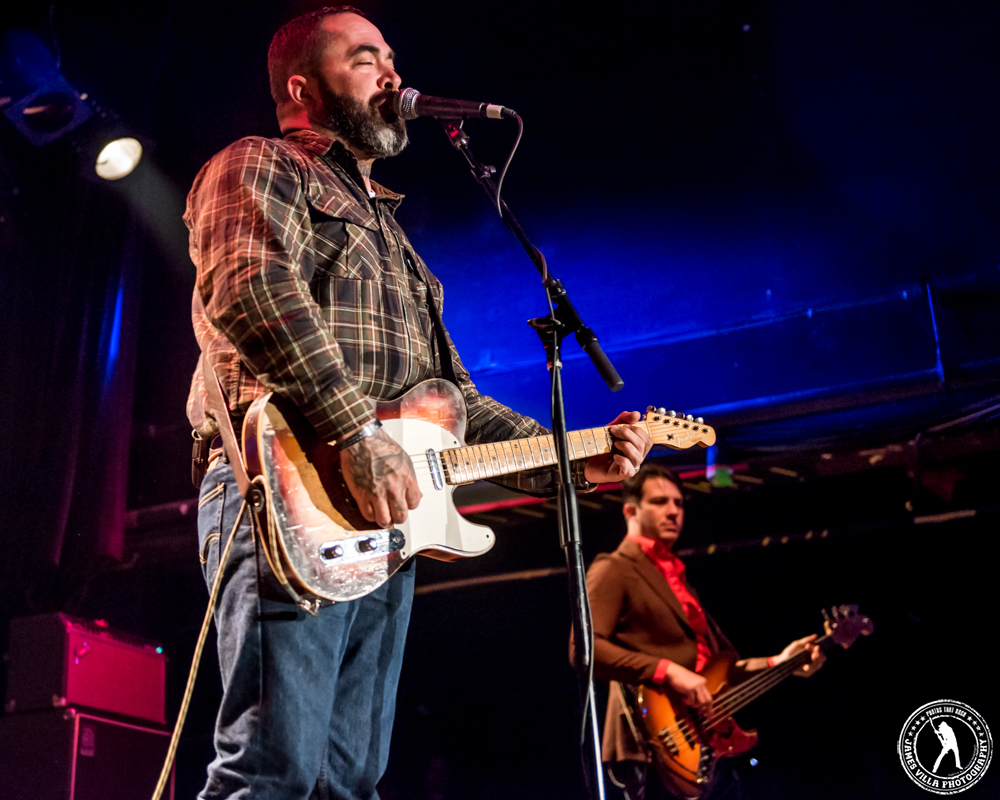 He had cut that previous one short, saying as much, but noting it’s his song and he can do what he wants. “It was only another chorus,” he said, dismissing any flak he might have been going to get. He proceeded to tell a story that began with him waking up that morning with his boots still on, saying he had no clue what had happened the night before, but knew it couldn’t have been pot, since he didn’t smoke weed anymore.

He got booed for that. “I don’t care, smoke all the weed you want,” he laughed, joking that after thirty years of doing it, he’s got a good bit of resin built up to still get a high. “I didn’t write this, but neither did band that made it famous,” he then stated, saying the writer of the song, Jeffrey Steele, was his inspiration for playing the track. It wound up being “What Hurts the Most” (Rascal Flatts is who made it well known); and it was the most poignant, heartbreaking song of the night. It carried a massive wave of emotion with it, cutting to the bone.

“I’m catching up to ya!” Lewis laughed after his stage hand brought him a fresh drink (after he returned for the encore he said he was just finally feeling buzzed). He gave all the military personal (past and present) a big shout-out for what they have done, before saying he was fairly certain Alice in Chains hadn’t played this stage since he was last here. That set up a killer rendition of “Rooster”; and the screams he periodically let loose on that one sounded phenomenal. It may have been acoustic, but it still packed a punch.

That was probably it, right? End with a fun cover everyone knows. No. There was more to be had.

He laughed that he should write a song titled “Woke Up with My Boots On” before busting out a cover of Bob Seeger’s “Turn the Page”, changing a line here and there to better fit him. He held “I” from the last line, “There I go” an impossibly long time, putting everyone in a state of awe. 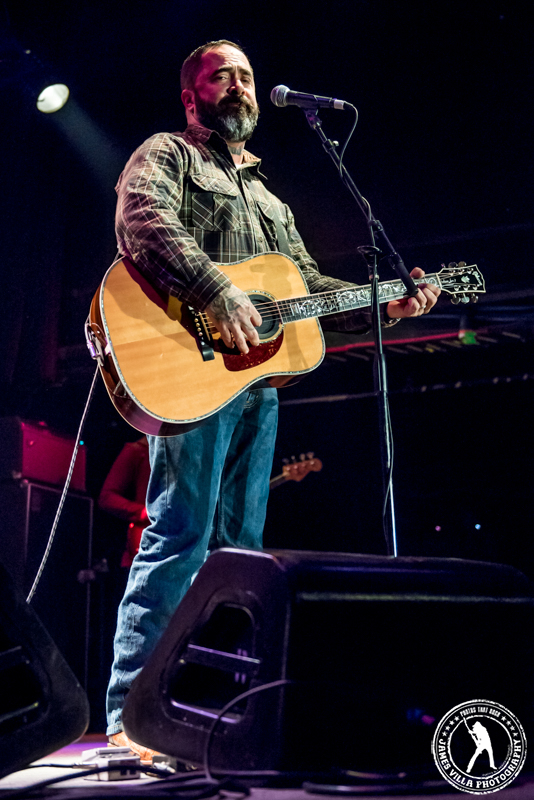 “Y’all are my people,” Lewis told the adoring fans, saying he was proud to be from New England, but his love for Texas ran deep. “I wrote this song a long ass time ago,” he then said, exciting the crowd, adding that every time he played it, it made him feel old. “Outside” turned into a sing along; even well before he requested it to become one. Fans were in a state of bliss as this 42-minute encore (yes, 42-minutes, easily the longest I’ve seen any act do) came to a close. Actually, the past two songs had each earned Lewis a standing ovation, and this one was no different.

It was something else, unlike anything I’ve ever experienced out of the nearly 800 concerts I’ve attended. I was far from being the die-hard fan that most everyone else was, but I was every bit as compelled to scream and shout as I stood and applauded this unforgettable performance.

Speechless. That’s what I was as I headed for the doors. The caliber of musicianship of which this performance was executed in was something else. Lewis’ band mates fit with him well, though he was always the main focal point, effortlessly commanding the attention he oh so deserved as his worn sounding voice belted out these country tracks; though he could switch to rock mode with ease and in a split second at the few times he needed to.

I find there’s usually no better way to acquire a taste for any band/musician then seeing a live show, and this one certainly did the trick for me. It may have taken me a few years, but from here on out, I’ll definitely be a die-hard of anything Aaron Lewis has done or will do.