Wednesday 13 let the Monsters of the Universe loose on Dallas 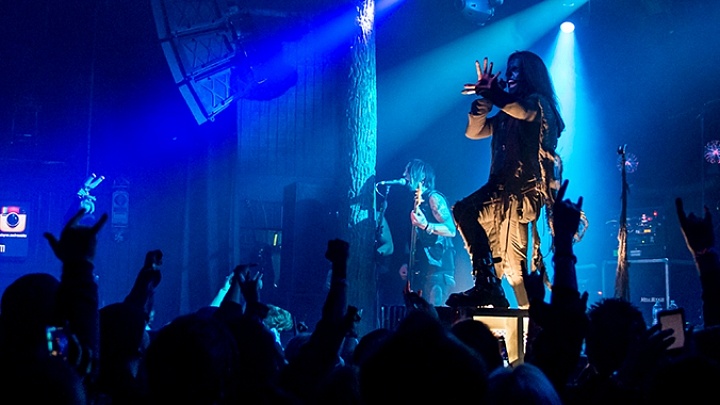 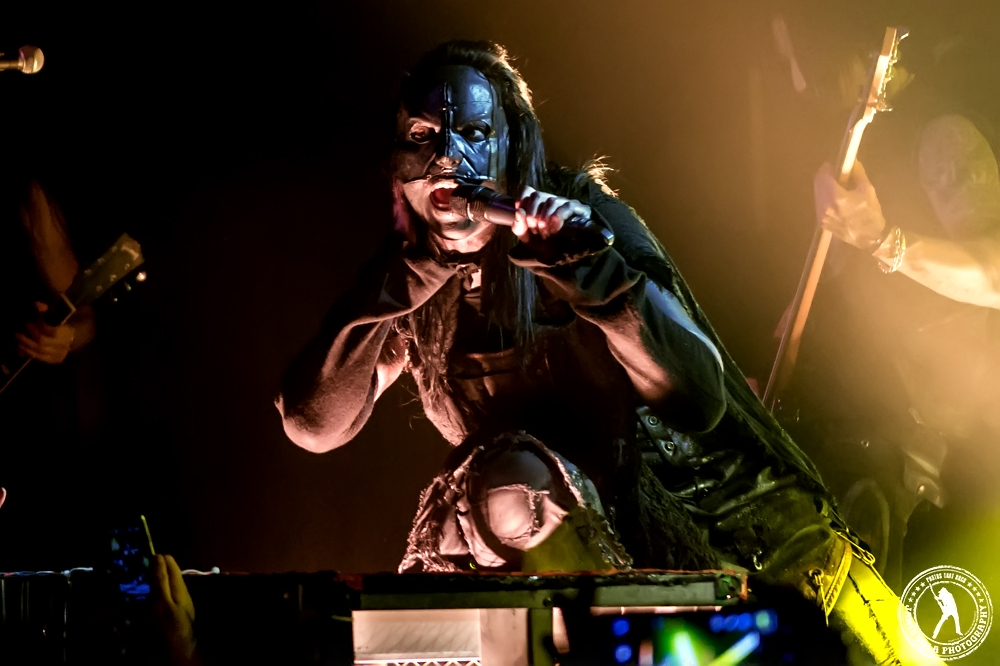 After a solid lineup that featured a local horror rock band from Dallas, as well as some darker and heavier rock from Eyes Set to Kill and Die So Fluid, the crowd out at Trees was ready for the main event: Wednesday 13.

Just the night before the horror rock/metal outfit had kicked off their latest tour in support of their newly released album, Monsters of the Universe — Come Out and Plague. Several Dallasites were ready for this, too. It may not have been a sold-out crowd on this Thursday night, though around a couple hundred people had shown up; and they surrounded the stage as the start time drew near.

The band proved to be kings of the transition pieces, often bridging one song right into the next; and their show began with one such eerie piece as the band slowly filed on stage. It was so dark you could barely make out the silhouettes of the guys, though they were noticeable; and the crowd went wild about a minute later, cheering as Wednesday 13 himself took the stage. His face was painted with the makeup that is standard for him, though he also wore a ghoulish looking mask that covered the top half of his face.

“…We are the nightmares that you cannot dream; an intergalactic killing machine…” That was a good line from “Keep Watching the Skies” that was fairly self-explanatory of the band in general; and for a good portion of the new song, Wednesday 13 grabbed a flashlight, waving it around and shining it on much of the audience as he moved and thrashed about. The crowd had been relatively calm for much of that, but as the song finally spiked, a dozen or so people seemed to instinctively begin a mosh-pit, while those who wanted no part in it backed off. 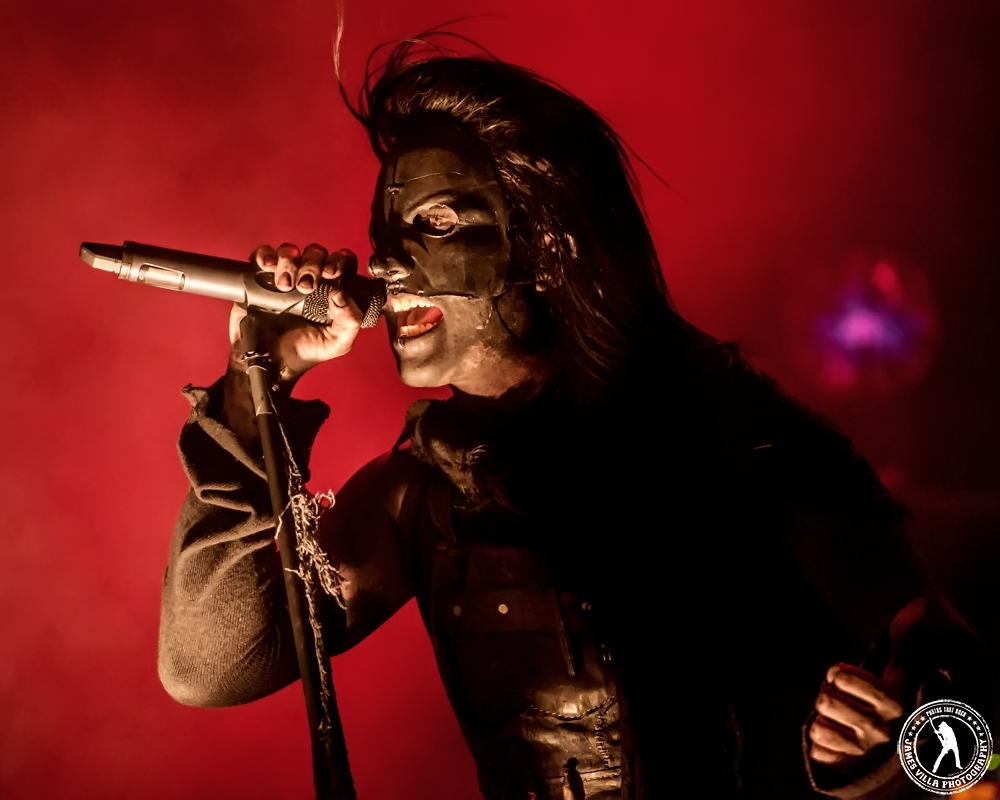 Speaking of the pit, things escalated during the bloody good “I Want You… Dead”. Never violent—and when someone did got knocked down they were quickly helped up—though that track sent everyone (band members included) into overdrive. “Get Your Grave On” was another highlight of the night, and it found Wednesday 13 reaching his full prowess as a frontman, and from here on out, it never wavered. He was very commanding of the crowd, placing one foot one the light box that set at the front of center stage, surveying the audience as he sang while some fans blew his hair upwards.

He changed getups for the next one, more resembling a devilish samurai thanks to the more detailed mask he switched out to, before going back to his original look afterwards. The costume change meant there were some lengthy, moody transition pieces before and after that song. The fans patiently waited, and all of a sudden, as the next one began to take shape, they realized what it was and were clearly excited. It was the title track from their 2008 album, “Skeletons”; and people were so caught up in it, that for much of the track, the mosh-pit ceased.

They continued their massive 61-minute long set, packing as much as they possibly could into it, and even a couple times requested people raise their fists and pump them along to the beat. Speaking of the beat, the two kick drums made for an often resounding tone and one you could really feel. Side note: written on one kick drum was the phrase, “They live” while the other read, “We sleep”. 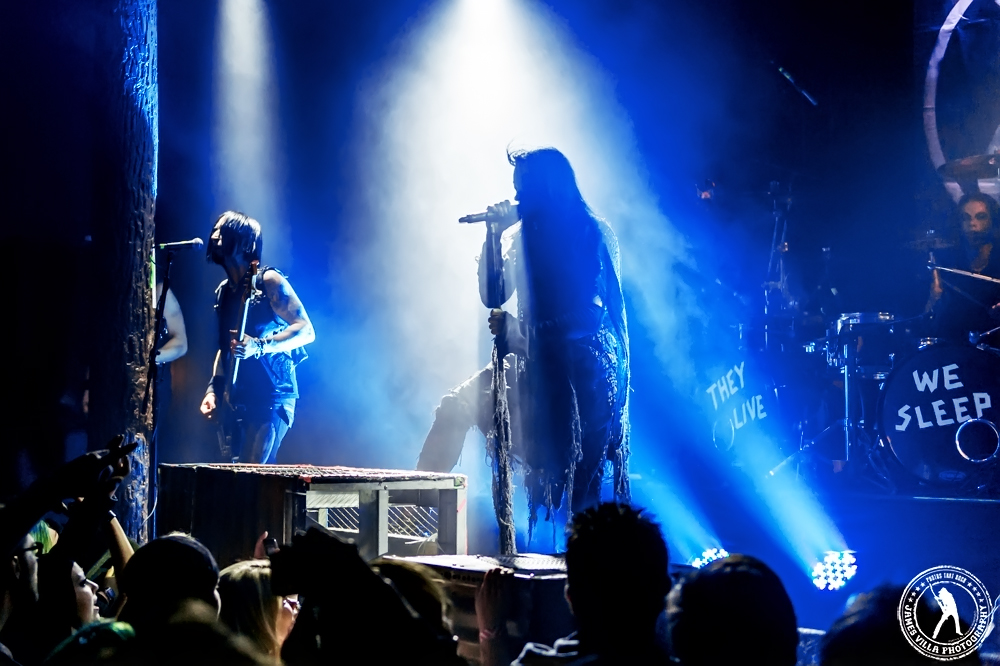 “People of earth, they’re coming for you,” Wednesday 13 said, letting loose a wicked cackle before the first of a couple new songs. “Planet Eater – Interstellar 187” was really good, though I loved the subsequent cut off the latest album, “I Love Watching You Die”. The chorus, “I just want to cause you pain. I only want to make you suffer. I want to watch you beg and cry. I love watching you die,” sounded phenomenal, definitely fitting the Wednesday 13 mold, and that part could have easily been a sing along, because it was so easy to pick up on. It’s really a standout number.

“Hail Ming” was another (semi) old one they did, before making their political statement with “Bombs, Guns & Gods – This is War”, which ended with Wednesday 13 saluting, though there was a bit of sarcasm to the action.

They had one more in the chamber before concluding things, but no one was ready for it to be over, and the chants of an encore began while the instrumentalists were all still on stage.

It took a few minutes, but they came back for an encore and it focused heavily on older stuff. From a cover of “Scary Song” from one of Wednesday 13’s past bands, Frankenstein Drag Queens from Planet 13, to “I Walked with a Zombie” and “Bad Things”. “Thank you all for coming out!” the frontman stated before that latter song, asking that no one take it personally, but, “I want bad things to happen to each and every single one of you.” Then, to wrap up this 18-minute long encore, they knocked out their latest title track, “Monsters of the Universe”, bringing things to a spectacular finish. 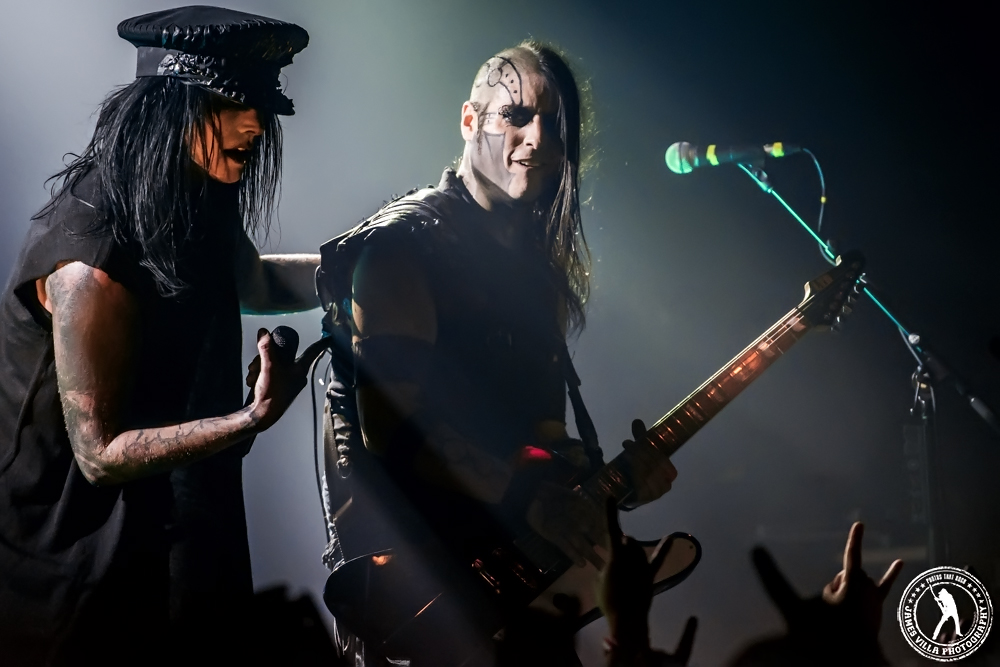 Seeing this show was actually my first experience with Wednesday 13 ever. I wasn’t sure how I was going to like the horror metal aspect of it all (especially since I’m not the biggest metal fan in general), but man, they were phenomenal live!

It was a stellar set list that consisted of plenty of heavy hitting new numbers as well as a barrage of older stuff (even from a few of his past projects) that made for a solid show that kept everyone engaged throughout. I even thought Wednesday 13’s voice sounded better live than it does on the recordings. There’s a certain harshness to it, fitting with the subject matter of their stuff, but at the same time, he has an excellent set of pipes on him; and getting to see the band so early on in their tour ensured they had energy to spare.

They made me into a fan; and the veterans left seeming satisfied, especially the moshers, who at the end of the night were merely knocking shoulders as they were so spent from it.