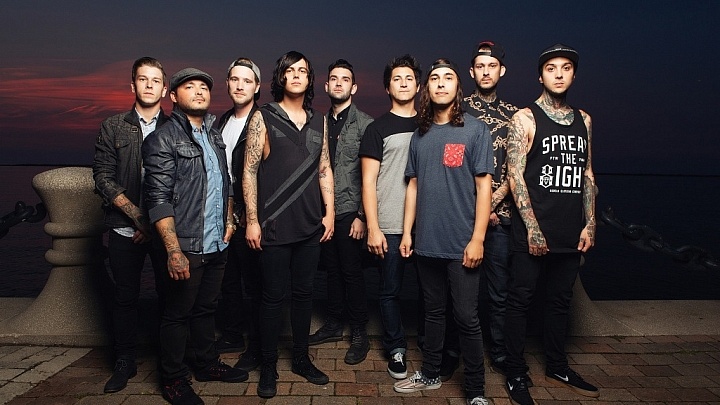 PIERCE THE VEIL & SLEEPING WITH SIRENS
ABOUT TO LAUNCH LEG TWO OF “THE WORLD TOUR”
With Nearly 100% of All Leg One Tickets Sold Out,
Leg Two Kicks Off January 23, 2015 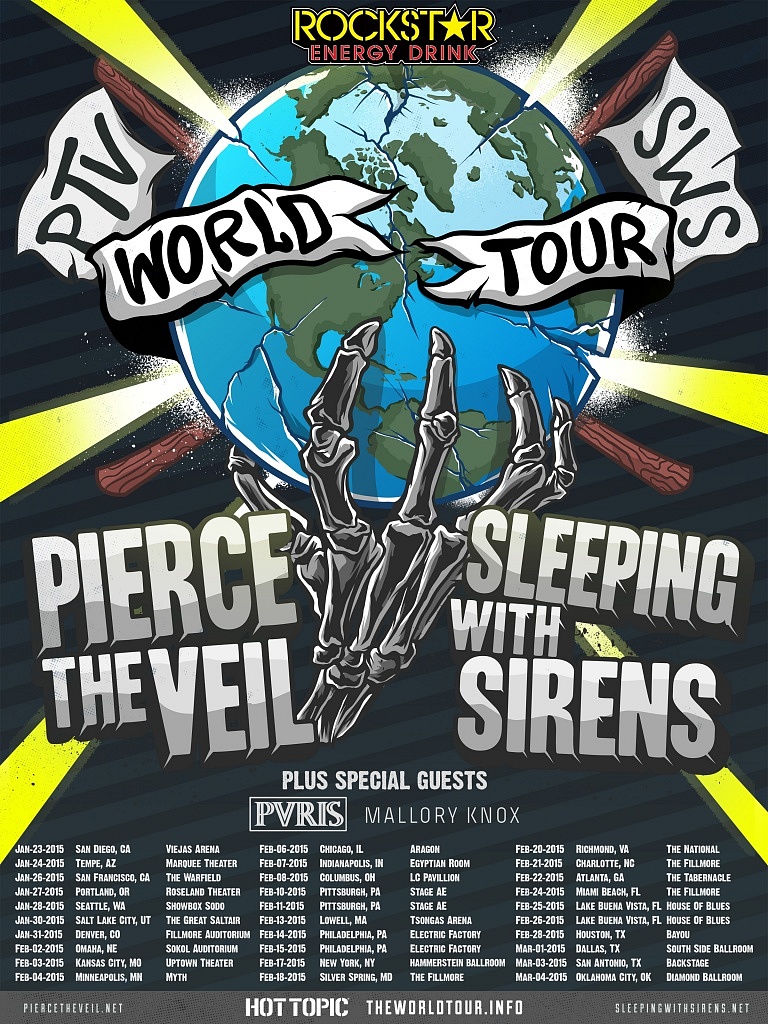 December 9, 2014 — With nearly 100% of “The World Tour’s” Leg One tickets having sold out, Pierce The Veil and Sleeping with Sirens and are set to begin Leg Two of their five-month, multi-leg, co-headline global trek, and Rockstar Energy Drink is on board to present all dates.  Leg Two launches on Friday, January 23, 2015 in Pierce The Veil’s hometown of San Diego, CA, and follows the 21 Leg One stops that kicked off in Fresno on November 5 and wrapped on December 6 in Las Vegas.  Leg Two’s 30 dates will hit all four corners of the USA in early 2015, with PTV and SWS alternating the closing spot; Leg Two support acts will be PVRIS and Mallory Knox.  VIP Packages and limited pre-sale tickets have already sold out, but GA tickets are available now at www.theworldtour.info.

“The World Tour” represents the first time PTV and SWS have toured together since Pierce The Veil’s sold-out “Collide With The Sky” 2012 headline tour, and both bands will be releasing brand new albums in tandem with the 2015 dates.  “We’re definitely going to be playing new songs on this tour,” said Pierce the Veil’s Vic Fuentes.

Earlier this year, PTV was sequestered for about five months in a New York recording studio, working with Dan Korneff who produced the band’s 2012 critically-acclaimed, award-winning breakthrough, Collide With The Sky.  Basic tracks are completed, and the band’s vocalist, Vic Fuentes, is currently finishing up lyrics and vocals.  The still untitled album will see a 2015 release (Fearless Records).  Said PTV’s bassist Jaime Preciado, “We don’t just play metal or just play punk, or any one kind of music, but we cross and mix different kinds of music to make our own sound.  The new music reflects that, it has a little bit of everything, some of it’s heavy, some of it’s fast, it definitely has the Pierce The Veil stamp, but it’s all brand new.”

Sleeping With Sirens has also been preparing for the release of a brand new album, working with producer John Feldmann (The Used, Panic! At The Disco, Good Charlotte).  This past August, fans that attended a special, intimate show in London took part in the filming of a music video for the band’s recently released single, “Kick Me.”   Although the official release date is yet to be determined, the album is currently being mixed and fans can expect to hear new music soon.

Legs Two and Three of “The World Tour” are as follows: