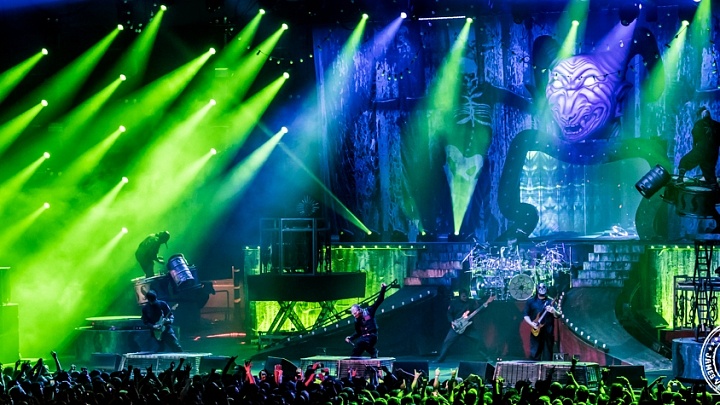 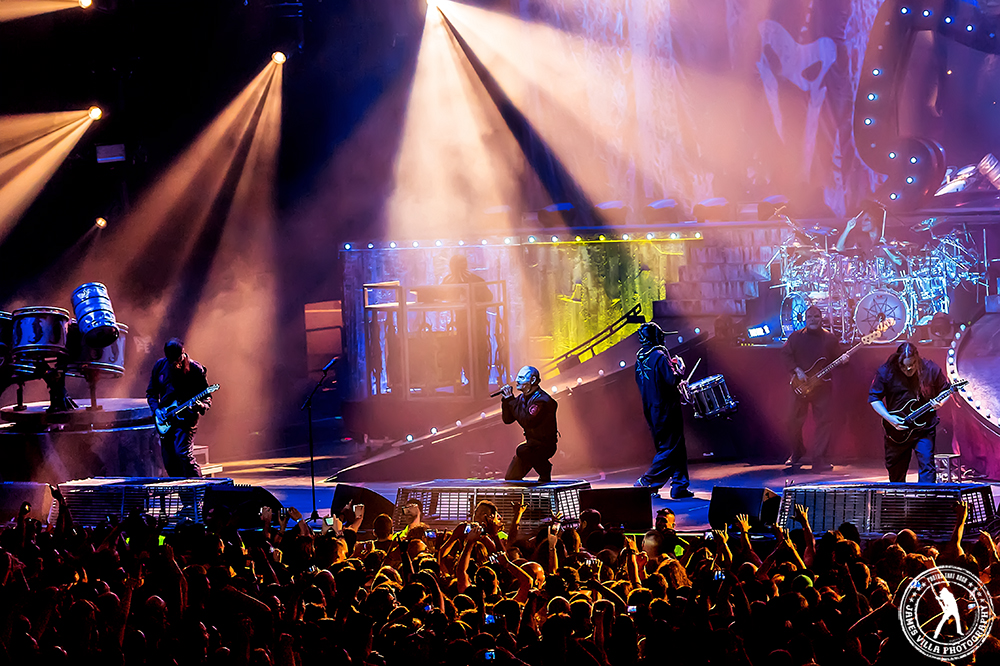 The wait for Slipknot was grueling; and the temperature was slowly dropping. The cold was bearable though, especially considering it had been at least two years since almost anyone in attendance had last seen Slipknot live.

With only one official date on the Prepare for Hell Tour under their belt, along with their two-night event that was Knotfest, no one really knew what they were in for. There were new members in the form of their bassist and drummer, new music from .5: The Grey Chapter, and even new/updated masks. Still, fans were expecting the same old Slipknot, albeit a renewed one.

A luxurious curtain hung in front of the stage. The detail was exquisite; looking like it belonged more in, say, 1950’s New York on Broadway. There was something far more sinister planned this night than some musical, though.

The lead track from the new record, “XIX”, began to play, and the start of it coupled with the dimming of the lights resulted in a mass amount of fanfare. The song played out, building the suspense, and then you heard the booming voice of Corey Taylor. “Dallas fucking Texas!” he shouted as they took the stage, officially getting things started with the subsequent track, “Sarcastrophe”. 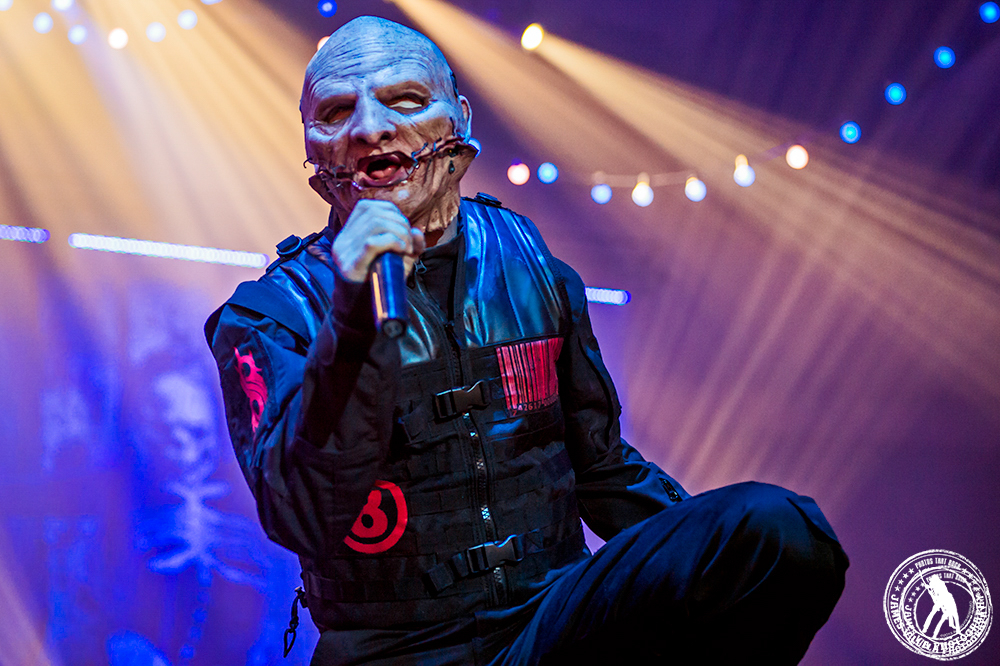 Additional percussionists Shawn “Clown” Crahan and Chris Fehn manned their kits, which sit on mechanical platforms on either side of the stage and they were constantly being raised and lowered in the air. Those new songs made up a decent chunk of their setlist, and they were peppered in among other classics, like what was coming next.

“Get those fucking devil horns up!!!” Taylor bellowed over the already roaring response they were receiving. “The Heretic Anthem” incited a lot of head banging, and no doubt plenty of moshing down in the pit; and they stayed on Iowa with “My Plague”.

“Is that Dallas fucking Texas I hear out there?!” Taylor asked upon finishing the song. He was quick to correct himself, though. “Let me rephrase that. Is that one of my absolute most favorite cities in the world?” he asked, noting it had been far too long since they had been here. But now that they were back, he mentioned they had brought along with them the number one album on Billboard charts, and that meant that metal was still very much alive, and, in his words, “pop stars can suck it”. That was a point everyone was happy to applaud.

That setup their first single from the new album, “Devil in I”, which seemed to capture the best of both sides of Slipknot, being melodic at times and heavy at others. A few songs later they got back around to .5, and “The Negative One” allowed guitarists Mick Thomson and Jim Root to start thrashing around, while Craig Jones laced some wicked samples into the track. 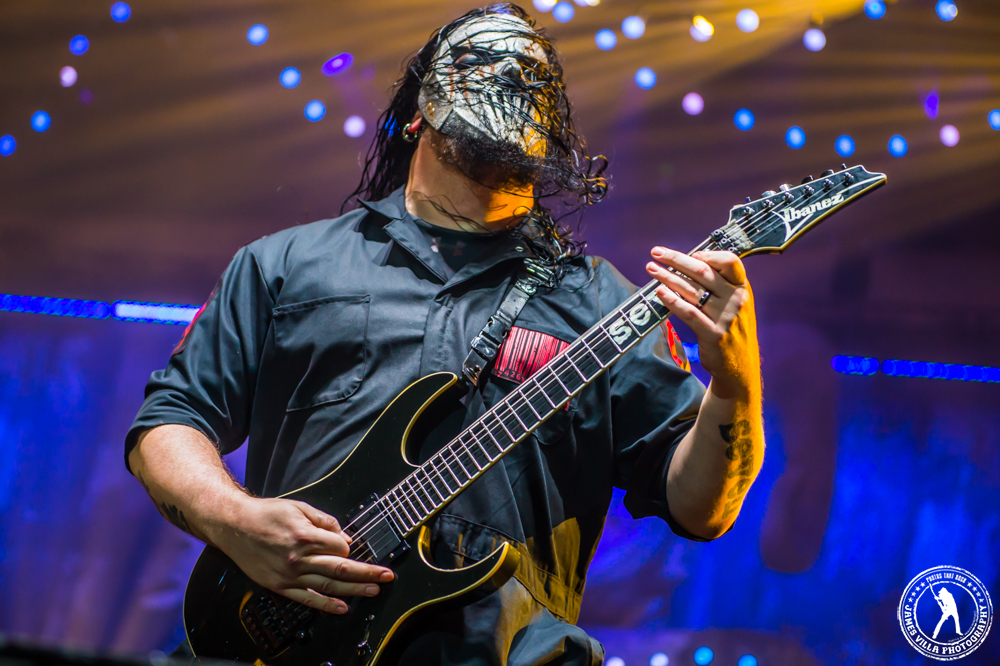 “How about 7?” Taylor asked fans, as the guitarist ripped into the next song; and Taylor made one simple request: he wanted to see everyone jumping in the air. They went way back with “Liberate”; while later on, “Before I Forget” really sent people into a frenzy. They had been enjoying those newer songs, but the reaction was unparalleled thus far this night, as members of the audience started pumping their fists into the air.

During a later break, Taylor mentioned how they had never been let down here, going as far back as their first trip to Dallas in 1999. They then bounced around some more records, before eventually capping their set off with “Custer”.

Fans were adamant about wanting an encore, and they knew it had to be coming, because really, what band truly finishes their set with a new song, no matter how good it may be? 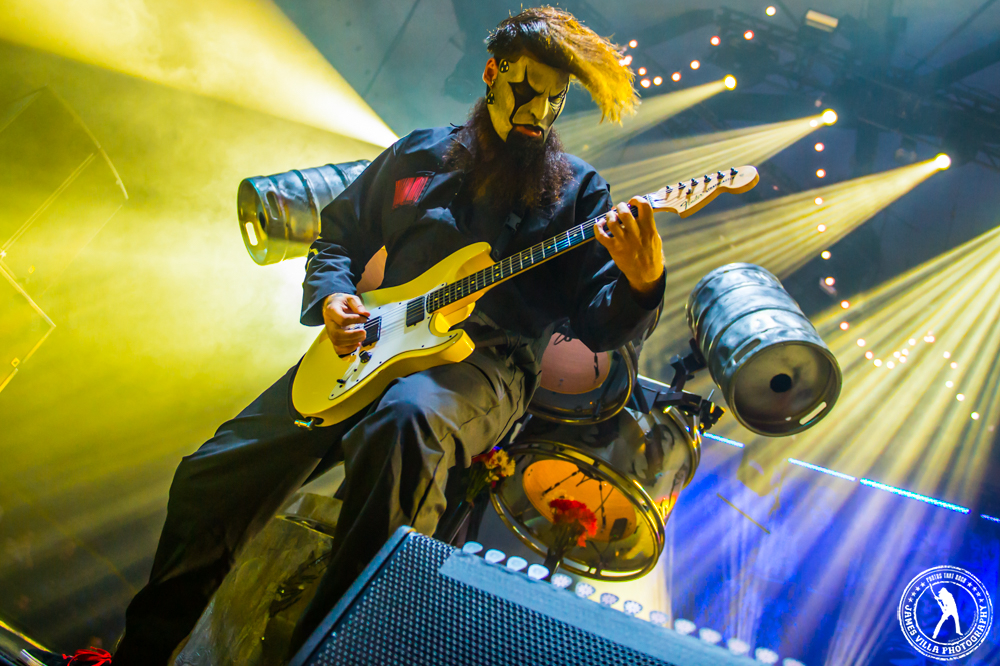 Sure enough, they still had three songs in store for everyone, spending most of their time on Slipknot, which included the closer, “Surfacing”.

The thing I enjoyed most about Slipknot wasn’t the high-octane performance they delivered, nor even the well-crafted music that is continuing to be forward-thinking in the world of metal. They were excellent aspects of it, but what I enjoyed most was the love they had for their fans, and how truly genuine it was.

Taylor was most vocal about it, from saying he hoped (and the way talked, planned) that two more years wouldn’t pass before they got back here. Then, once it was all said and done, he excessively thanked the thousands of people who had come out and spent their Halloween with them.

It was a night to remember.