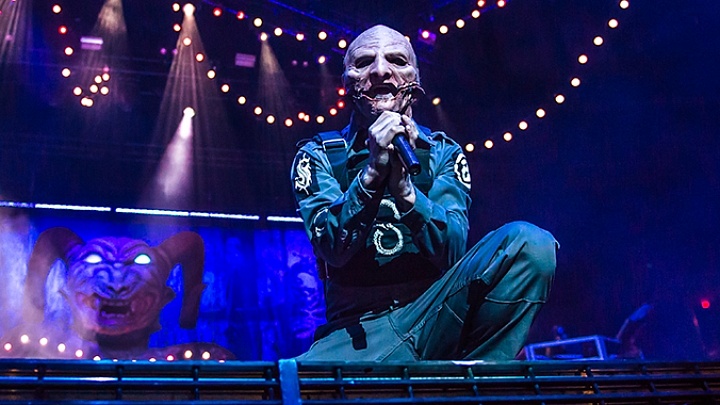 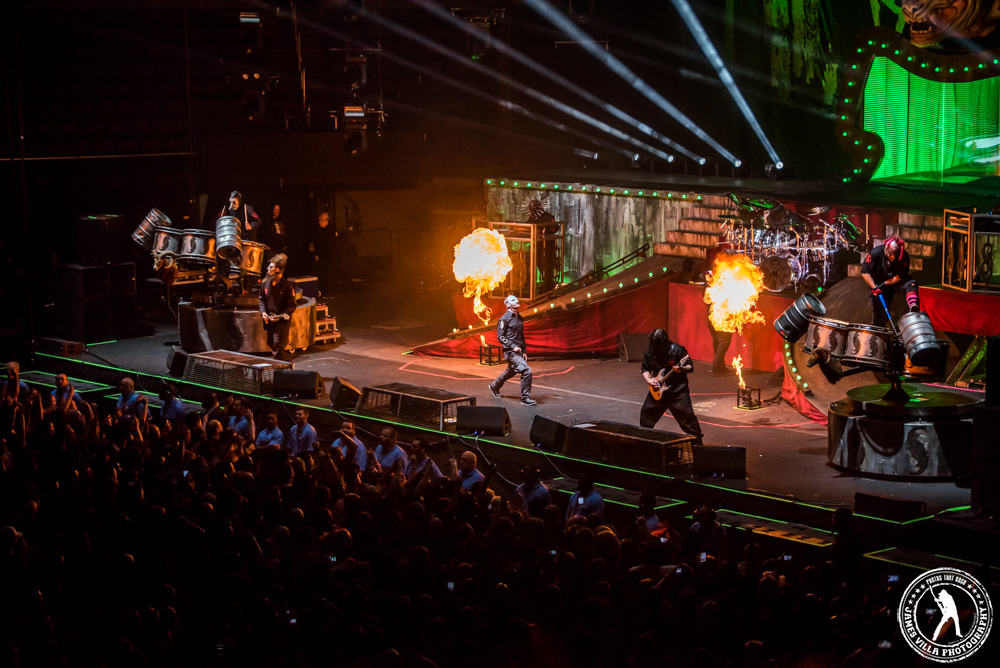 It was a bit of a chilly Wednesday night in Oklahoma City, and the weather and the fact that it was the middle of the week perhaps kept some people at home instead of venturing out to the Chesapeake Energy Arena.

The crowd may not have been the sold-out one Slipknot deserved as they made their first appearance in OKC in more than two years, but those who were out were extremely excited about the night. King 810 and Korn had proven to be excellent openers, further pumping fans up for the main course.

After having seen the Dallas show just a few days earlier, I was psyched about it too, mostly ‘cause the view would be a little better this time around.

Speaking of the view, being up in the second floor and on the side of the stage allowed for some excellent angles; as Slipknot prepared to unleash their mayhem.

A curtain hung in front of the stage, covering things from view for much of the audience. However, those in certain seats could already see glimpses of their twisted carnival-like backdrop, consisting of a giant devil head hanging at the back of the stage, as well as some other nice touches. You could also see each of the band members as they walked out down the staircases that led up to the top of the stage (with the drum kit sitting on one level of it) and took their spots. As they did so, “XIX” played over the PA system, and once it was done, the action started. 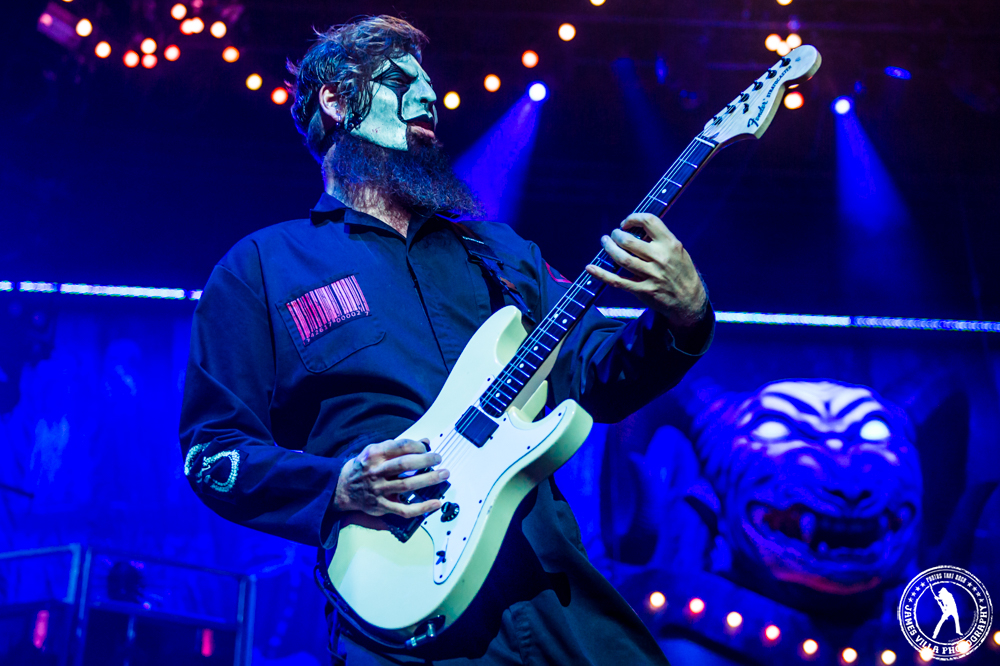 The curtain raised and fans cheered as they saw the modern day music legends. They burst right into “Sarcastrophe” — the first of a handful of songs they did off their new album — and one that appeased all of the metal heads in attendance. There was plenty of head banging and moshing going on down in the pit; and once requested (or more ordered) by Corey Taylor, the crowd placed their devil horns in the air. They treated everyone to the first song off the night off Iowa, which was “The Heretic Anthem”. Shawn “Clown” Crahan and Chris Fehn were stationed behind their drum kits, which sit atop some risers that so far spinning in the air as they went up and down. At one point, Fehn hopped off his and roamed about the stage while adding some additional screams; while they also started using some pyrotechnics, with the intense heat being felt even up in the stands at the end.

The raw doses of heavy metal continued as they segued directly into their next song, and during “My Plague”, Taylor took a drink from a bottle of water and then threw it out at the crowd as he asked to hear their voices. Upon finishing it, a spotlight lit up the frontman, who just stood there surveying the audience and egged them on with little hand gestures, making them roar even louder.

“Is that Oak City I hear out there?!” he finally asked in his booming voice. He mentioned he was going to go ahead and get the formalities out of way, saying how it had been too long since they had been here and asked if people were “happy to have Slipknot back.” Of course, they were. “I want to see my family and friends!” he bellowed, requesting the lights be turned up. “They’ll let anyone inside this place…” he laughed, before asking everyone “step inside” for another cut off .5: The Gray Chapter. “CAN YOU FEEL IT?!” Taylor roared as guitarists Mick Thomson and Jim Root and the rest of the band started “The Devil in I”. Taylor continued using some water, this time spitting some out some towards the fans in the pit, before again slinging a bottle of water out; and towards the end, the band suddenly trailed off; creating the impression they were done, before they kicked it back in.

Clown and Fehn switched gears a little during “Psycosocial”, ending up down on the stage in the latter part, each with a snare drum hanging in front of them, like what members of a marching band use. And even though it was just a snare, they still managed to deliver some killer beats and do it in style. 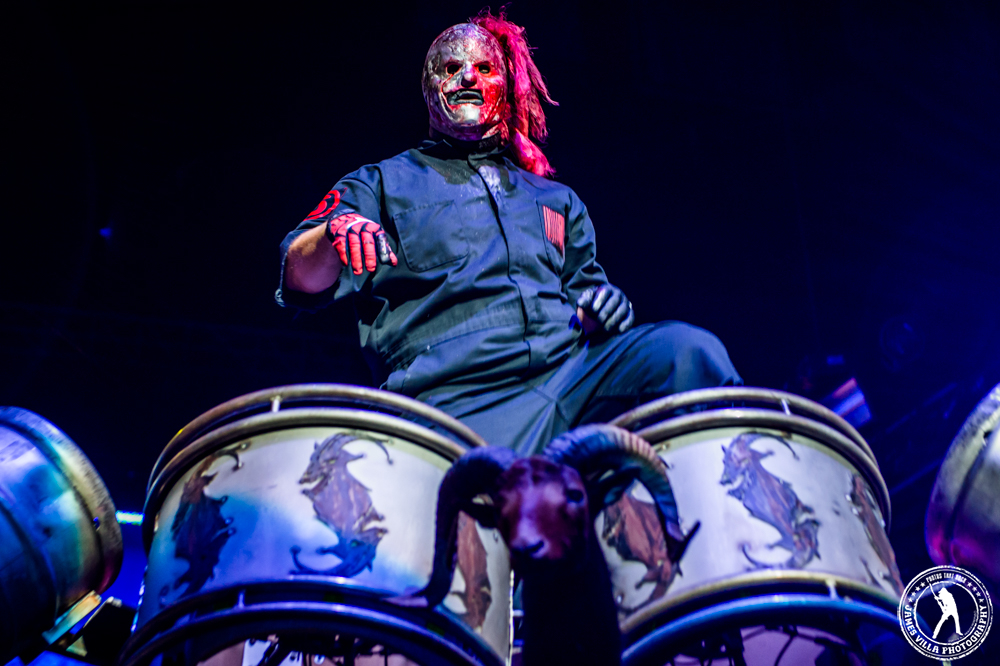 If there was still any question as to how Slipknot was doing, they put it all to rest with a string of songs that came one right after the other, ranging from another new one to “Disasterpiece” — which had Clown getting off his drum riser to scream along with Taylor — as well as a pleasantly surprising appearance of “Dead Memories”.

“You still with us out there Oklahoma?!?” shouted Taylor, who promised they had another that would get everyone on their feet. Sure enough, “Before I Forget” did just that, even getting some of those who were still sitting in their seats up to sing along. “You want some fucking more of that?!” he asked, as “Duality” whipped the crowd into even more of a frenzy; and Clown could be seen striking one of the barrels on his kit with a bat.

On behalf of the entire band, Taylor thanked everyone for “being a part of this amazing night”, making it sound like they were basically done. “I mean, we ain’t leaving yet…” he quickly assured, asking the spectators if something from Volume 3: (The Subliminal Verses) sounded good. The track they picked off it was fulfilling, though the excitement that “Spit it Out” brought on eclipsed it. They extended the song, and Taylor took a poll on how many people had seen them before and how many were seeing their first Slipknot show. There were a lot in each category. Those who had already knew what was coming as he asked everyone in the building to get down low to the floor. “When I say ‘jump the fuck up’ what are you going to do?” he asked, causing the fans to respond, “JUMP THE FUCK UP!” 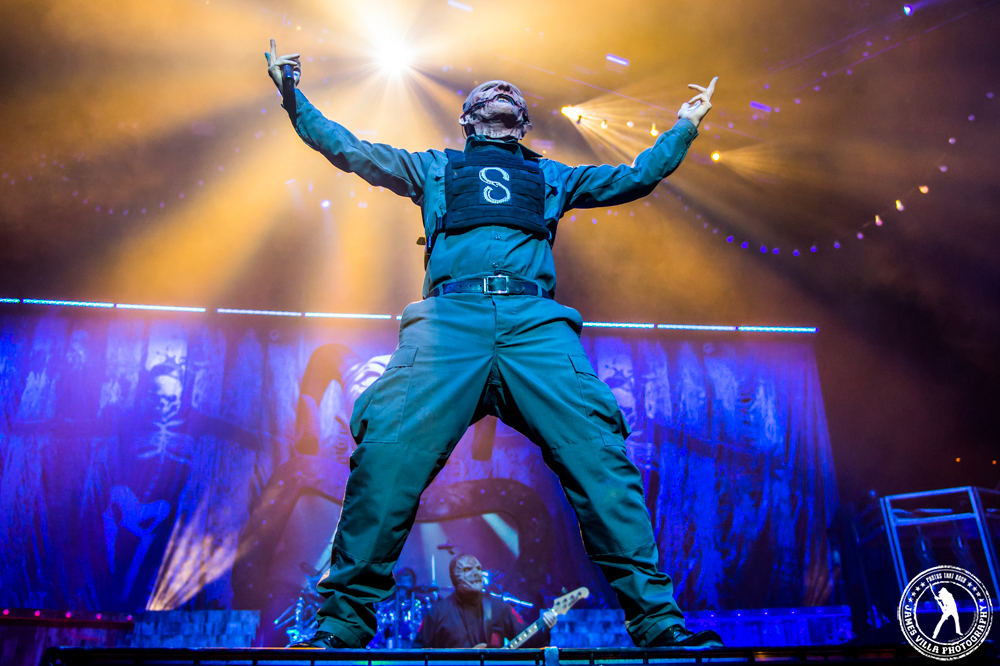 People did just that when they brought it back in; and the 74-minute long set drew to a close with “Custer”. “Thank you so much. We fucking love you!” Taylor said, as he followed his band mates off the stage.

The encore was coming, and the final 13-minutes of Slipknot’s time in OKC began with “(sic)”, ending with Clown and Fehn standing on a riser at center stage with Taylor between them as they thrashed about and shouted the final line, “You can’t kill me, ‘cause I’m already inside you!”

One more staple followed, and then came what Taylor referred to as their “national anthem”. “Get your metal fingers up in the air!” he demanded as Thomson, Craig Jones, Sid Wilson and the rest of the band opened up “Surfacing”.

“I promise you this, you will see us again,” Taylor said in advance of that song, and something about the way he said it made it sound like next time would come sooner rather than later.

Despite a nearly two year absence and having to work in a couple new members, Slipknot has quickly made their return to form. It was only seven days before this that the Prepare for Hell Tour first began, and they’ve already found their rhythm. They commanded the stage with a devastating force; and their tenacity was on full display this night. They also know how to work the audience, and their audience is more than willing to do whatever is requested of them.

Point is, Slipknot is a heavyweight, and they show no signs of relenting.