Slayer is Merciless in Grand Prairie 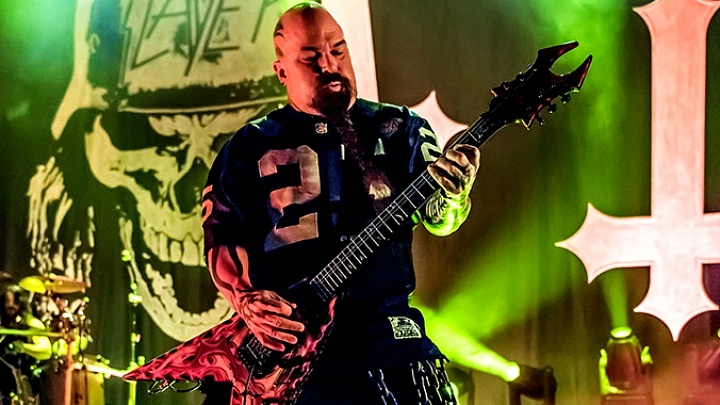 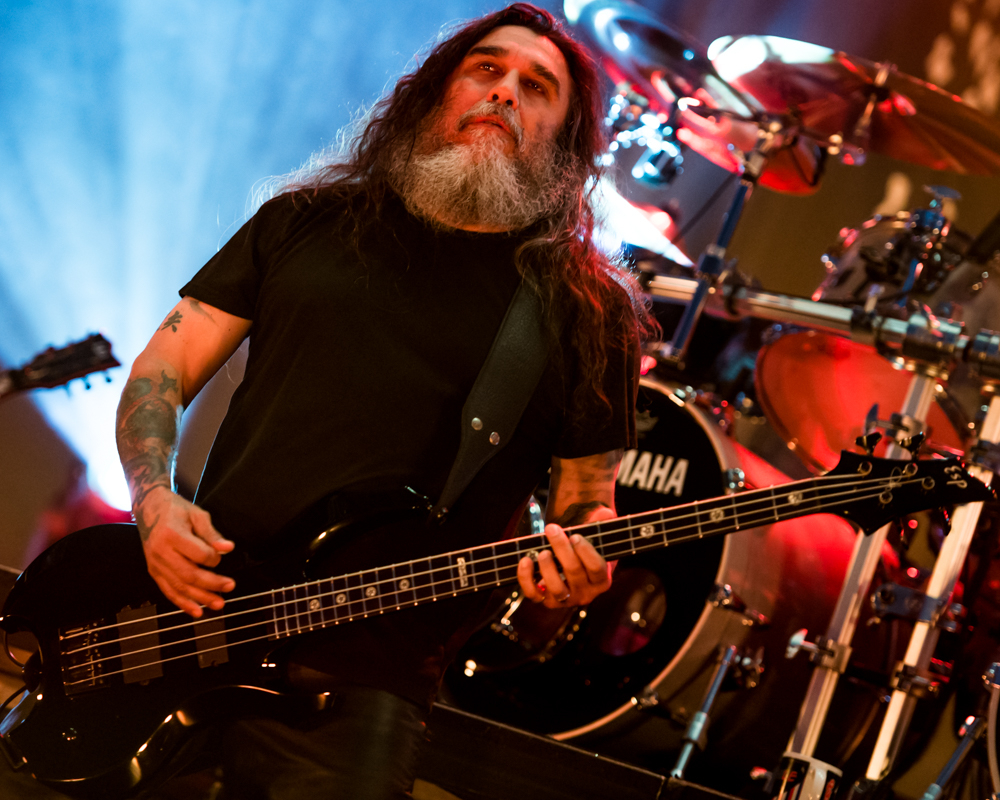 The Verizon theater in Grand Prairie was a haven for Dallas/Fort Worth area metal fans this night, and they had come out in droves.

The reason was to see one of metals most revered acts, and some of the pioneers of thrash metal: Slayer.

I may be far from being the biggest metalhead (that’s not to say I don’t enjoy some metal), though I was intrigued to experience Slayer; and Suicidal Tendencies and Exodus had each done an excellent job of warming the fans up.

Slayer’s intro was perhaps the coolest. A massive curtain hung across the stage, shielding everything from view. However, when it was time for the band to begin, you could see just their silhouettes as guitarist Kerry King, singer and bassist Tom Araya and guitarist Gary Holt walked across the stage and assumed their positions. The curtain dropped as the first note was struck, and chaos ensued shortly after.

Four crosses (two on each side of the stage) hung upside down; and they opened with the title track from their most recent album, “World Painted Blood”. Even though I was a little higher up in the stands, I could still feel the pulse-pounding beats Paul Bostaph was laying down, especially when he used both bass drums. I can only imagine how heavy it must have sounded for those in the pit; and everyone was loving it. 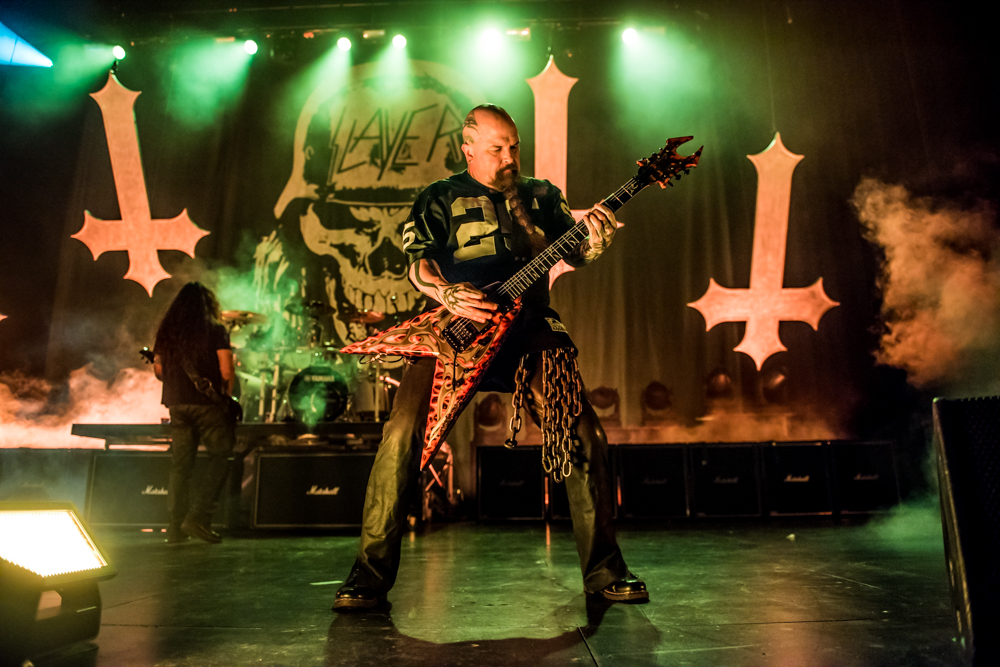 As was done periodically between songs this night, all the lights went out afterwards. It was hard to even make out the person standing next to you through the thick blackness, though their roars were still easily heard when they realized the icons were starting “Postmortem”. They touched on most of their records during this massive set, often combining them together so seamlessly that if for some reason you happened to be unfamiliar with the music, it would have been hard to tell where one ended and the next began.

A couple songs later, they went all the way back to 1983, busting out “Die by the Sword” from Show No Mercy. All eyes gravitated towards King, who was dominating on his axe (especially on the solos), and even if you weren’t close enough to clearly see the work he was putting into it, you still had to marvel at it. He then wound them right into “Chemical Warfare”, which further enlivened the crowd, with a large group of those in the pit area moshing to the ultra-heavy, speedy track.

“Thank you,” Araya said humbly. A lone spotlight shone on him as he addressed the fans for the first and one of the only times this night. They were more about the music than anything, and people were fine with that. “…I guess I got a lot of making up to do tonight, huh?” the singer said to the die-hard fans; and in their eyes, I don’t think he had anything to make up, because he could do no wrong.

“You ready?” he asked. King and Holt had now returned, and tore them off on another series of songs, beginning with “War Ensemble” and also included “Necrophiliac”. The audience was loving it, banging their heads along to the music, with many also singing the tracks. The energy was there, first off from Slayer, and it was all too easy for the audience to pick up on it, which in turn made the band dig a little deeper than what they already were. 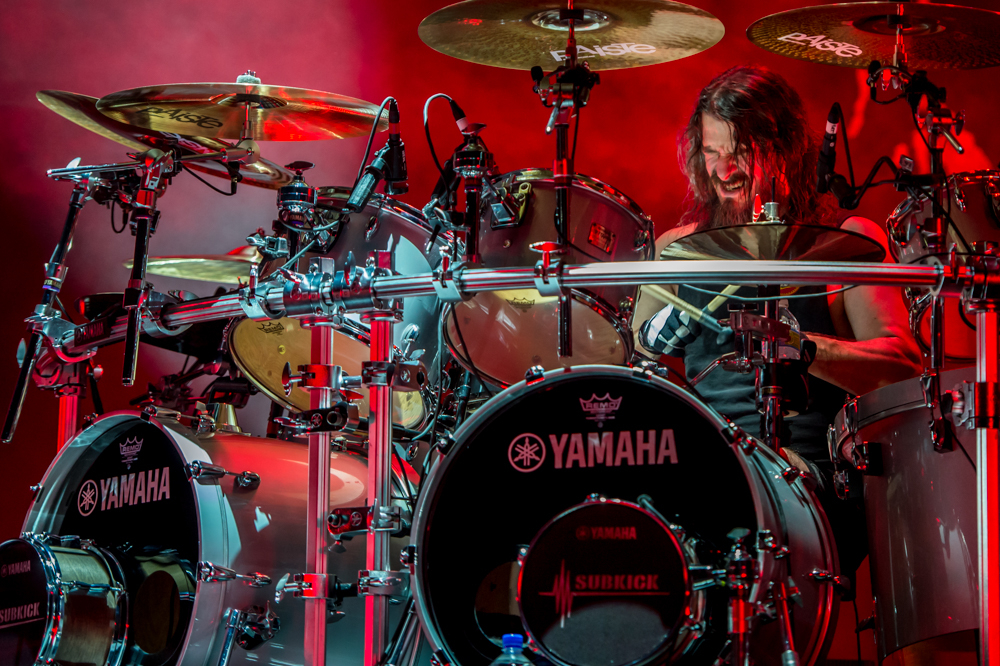 “Spill the Blood” was one of the highlights of the night; and another song later, Araya was again left as the lone figure with the lights on him. He had to wait to speak, because the screams and applause were so overpowering. “Thank you very much,” he told everyone, before setting up their next number, saying it was for “the blood sucking creatures of the night.” “At Dawn They Sleep!” he half bellowed/half screamed. That one really got the spectators riled up; while the blistering pace of “Jesus Saves” elevated things to a whole new level of chaotic goodness. On that note, “Disciple” served as a perfect follow-up.

A couple more songs were knocked out, before Araya showed off his humors side, saying they were going to do a romantic song, something fans seemed to be in disbelief over. “We all have a little love affair with death,” he quipped, before saying this was a song he sang to his wife every night. You couldn’t help but laugh at that, especially upon realizing it was “Dead Skin Mask” he spoke of. It gave way to “Raining Blood”, and you should have heard the screams of excitement it got. Even with my ear plugs in it was deafening.

The stage was again shrouded in darkness once the hit single was completed, and while the band did leave, I didn’t consider it long enough to qualify the next two songs as an encore. It was more just a quick break to swap instruments. There was also no screaming of “SLAYER!” to pull them back out. Instead, the crowd just kept their eyes glued to the stage, waiting for what would happen next.

The best part came during the closer. The Slayer banner suddenly dropped, revealing another banner behind it. “Hanneman” was printed in the center, along with his year of birth and death. It was a classy way to honor the late guitarist, especially since it happened as they hit “Angel of Death”. 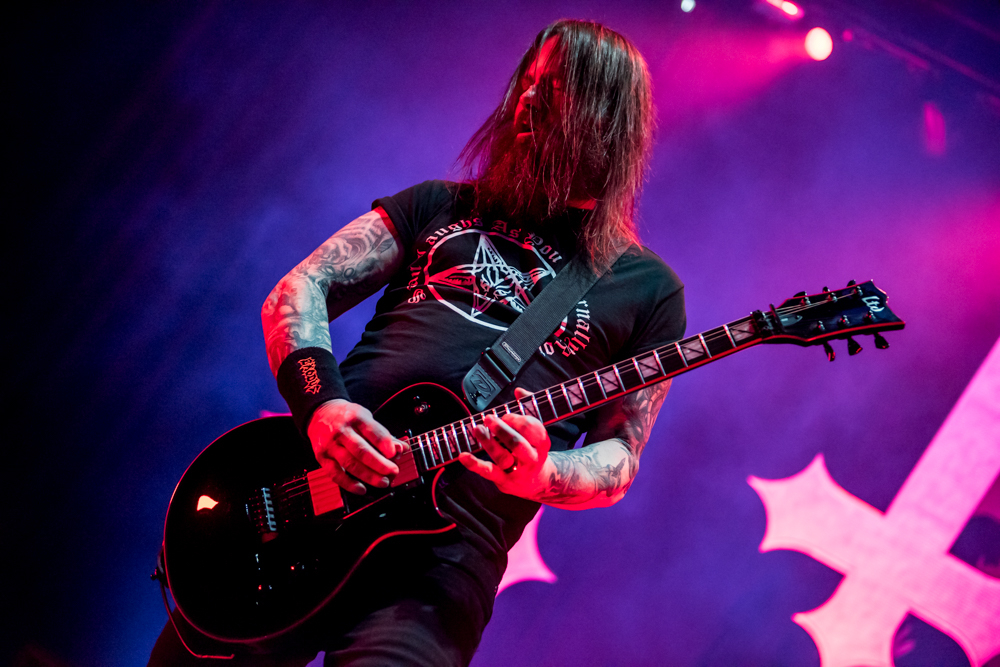 “Thank you for sharing this time with us,” Araya said once their 95-minute long set was finished, as he, King, Bostaph and Holt all bowed to the audience.

Sure, they had the stage for a while. I mean, an hour and a half plus is impressive, but even in that time, these legends packed it as full as they possibly could. It was a near constant bombardment of one song after another, and there wasn’t one ounce of “filler”. Everything sparked great reactions from the crowd, with each cut being at least one persons’ favorite.

To say I was impressed would be an understatement, too. Thrash metal just is not my thing, though I got into it. The high-octane performance made it nearly impossible not to; and I did also enjoy the music. However, it was the performance that was truly the most impressive aspect. It was great to see the dynamics they’ve concocted over the decades they’ve been doing this. Araya would at times take a backseat by the drum riser as he rocked out on his guitar, while King and or Holt pummeled the people with their massive guitar riffs. Other times it was the opposite, with Araya capturing the attention with some mighty bass riffs; and Bostaph was doing such a phenomenal job on the kit, you always had at least one eye on him, as his rapid-fire beats continuously shook your insides.

Slayer has been busy over the last few years. In fact, this is the third straight year they’ve done a show in the Dallas area, and with a new album expected sometime in 2015, it doesn’t look they’ll be taking any extended breaks anytime soon. That should be excellent for their fans; and maybe that will mean I’ll have a chance to see them again before too long. Yeah, I wouldn’t mind this experience again.