KORN work the crowd as The Prepare for Hell Tour makes a stop in Oklahoma City! 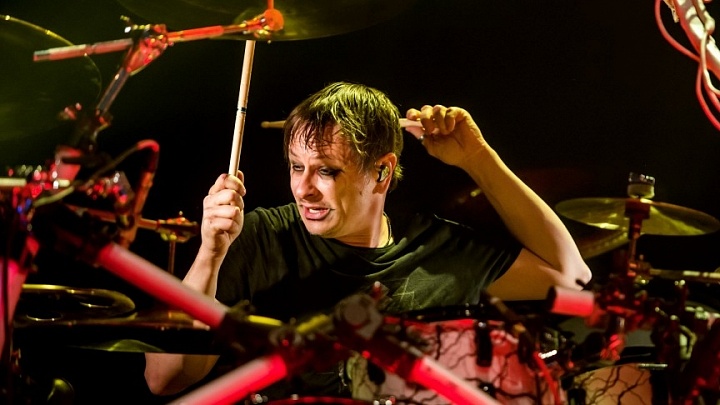 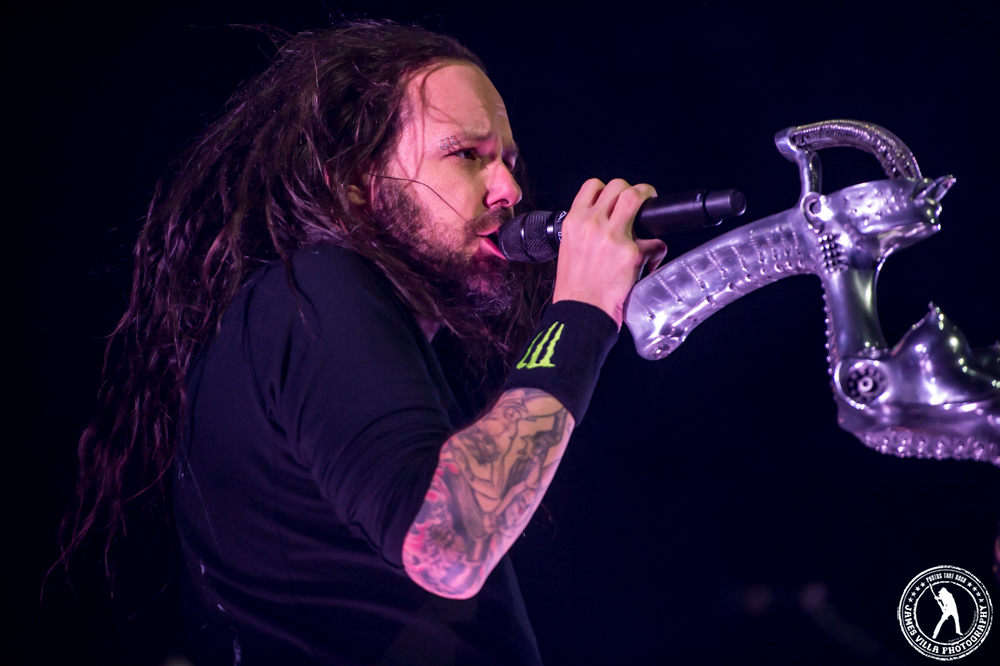 Sandwiched in-between the more thrash metal of King 810 and heavy metal of Slipknot was Korn; and despite the differences in their nu metal sounds, the audience was no less excited to see the band, who is currently celebrating the 20th anniversary of their debut album.

The crowd erupted in cheers of excitement as the lights went out, and an eerie neon glow bathed parts of the stage, while a remix of “Twist” played. One by one, the band took the stage; beginning with drummer Ray Luzier, while bassist Reginald Arvizu climbed atop one of their props, elevating him above the rest of the band. Brian Welch and James Shaffer walked out next, still partly shrouded in darkness.

The remix fell silent, and then Jonathan Davis began those gnarled, incoherent words of “Twist”. I’ve got to say, it’s really cool hearing that song open up their set. “Here we go, y’all!” he exclaimed, as if he were telling people to strap in and get ready to enjoy. People knew just what to do during “Here to Stay” when the frontman stopped singing at times, and their voices surged on, “Anticipating all the fucked up feelings again!” before Davis resumed singing. “I can’t hear you! Louder!” he shouted as the track came to an end. They weren’t going to slow up, though. After all, they only had 48-minutes to work with this night. 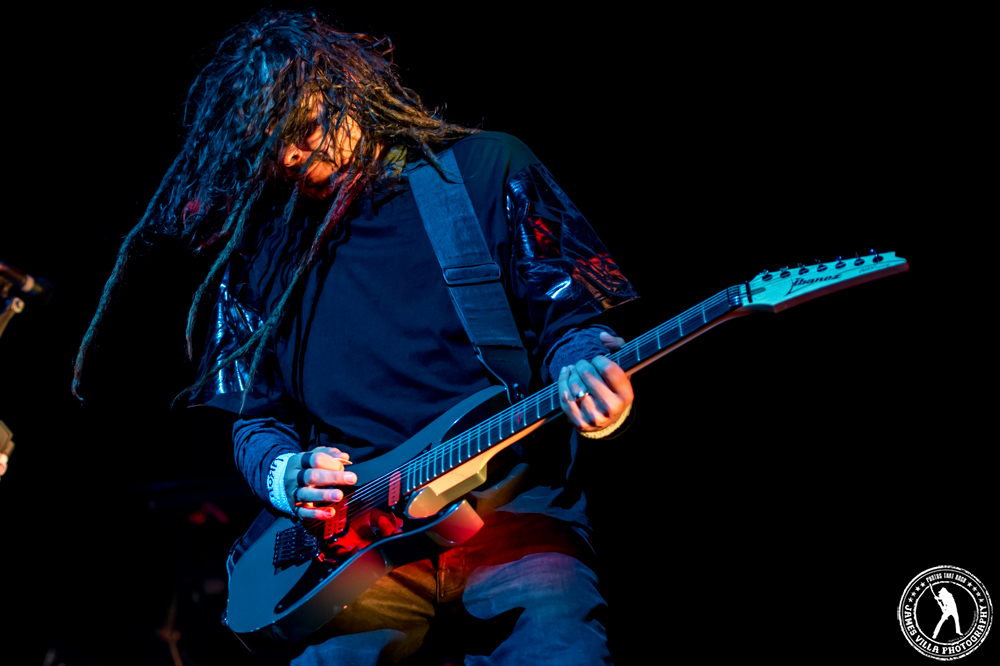 They tore right into “Right Now”, which saw Luzier slinging one of his drum sticks into the air before catching it. Having seen them a few times this year, that’s a move I’ve seen him do a little more than a dozen times, but it’s still amazing to see. “Love and Meth” was one of the offering they did from The Paradigm Shift, and during it, Arvizu got down on floor with his band mates. It’s worth noting that the floor Korn used was large “tiles” of glass that had lights in them, allowing them to flash a variety of colors and added a nice touch to things.

The song ended with Luzier throwing both drum sticks behind him and getting some new ones. Welch soon started the notes of their next number, getting a massive roar from fans (they even jumped around a lot), who instantly realized it as “Falling Away From Me”. It sounded even better than I’ve heard before, with Davis hitting some higher notes at one line; while he pointed out Arvizu as he was in the midst of a stellar bass solo.

“Good God” continued their set, and the anger in it was quite evident. There was a pretty humorous moment, though. Welch had moved down to a little ledge below the main stage, and while he was shredding on his guitar, he bent down and placed his open palm on the head of one of the security guys, pushing it back and forth. The security guy didn’t even act like anything was going on. He never looked behind him or seemed startled, instead, he just maintained his view with the crowd, making sure everything was okay. 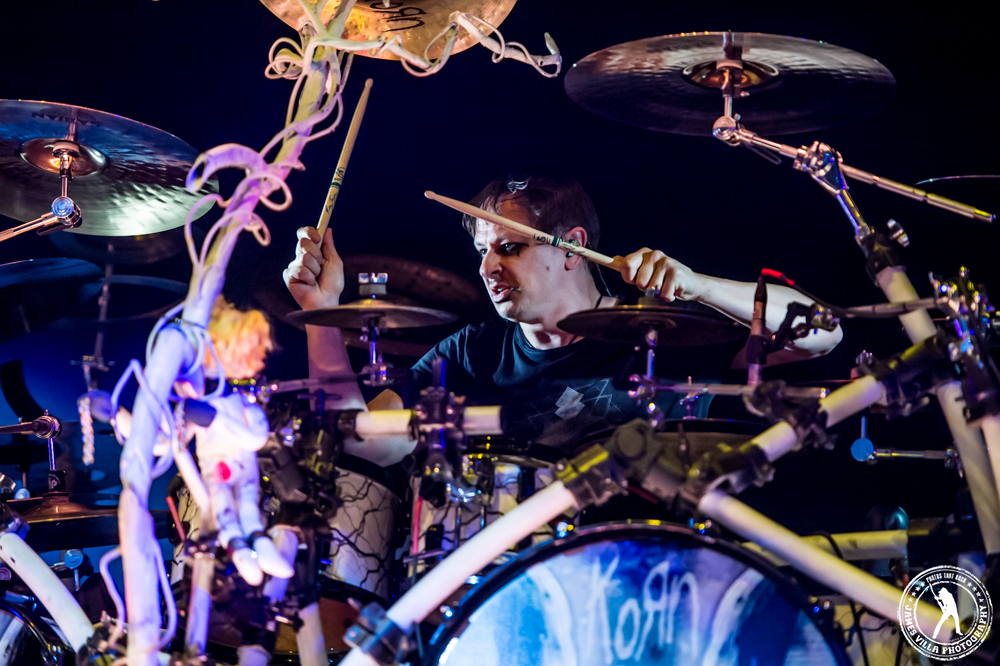 “You will never fucking bring me down!!” declared Davis after “Hater”, before he and the rest of the band slipped into the shadows. People were left wondering what was coming next. It wasn’t long before Davis strode on stage with a bagpipe, and fans went ballistic. He soloed on that thing longer than I think I’ve heard him do at the other shows this year, and the spectators ate it up! Once he put it aside, they started the dark nursery rhyme-like “Shoots and Ladders”; and at its peak, there was a sizable and rough looking mosh pit going on in the pit.

Winding down their set were a couple tracks from Follow the Leader, beginning with “Got the Life”, which had a brief clap along moment, and they rolled it into “Freak On a Leash”, causing fans to rejoice. The seamless flow continued, while Davis informed everyone this would be their final song of the night, and it was the song that had started things for them twenty years before. “…We wouldn’t still be doing this if it was not for you,” he told the audience, who by this point had realized it was “Blind”.

“Thanks for making this shit so enjoyable for us,” Davis remarked before walking off, while Welch, Shaffer, Arvizu and Luzier all stayed out there, throwing out picks and drum heads and other things of the ilk to whoever was able to catch it. They stayed out there for a couple extra minutes, just giving to their fans, and I think that’s fantastic.

I know I’ve been pretty fortunate to have seen Korn four times in not even three full months, and though I’ve known what’s coming, it has never made their show feel mundane to me. It’s all in the musicianship and how these guys handle themselves on stage. In twenty plus years, they’ve mastered the craft of performing. They have an excellent catalog of songs to draw from and keep it to the hits (mostly, but even their newest music is still in that vein), and the crowd’s reaction says it all. They love it, but really, how can you not?