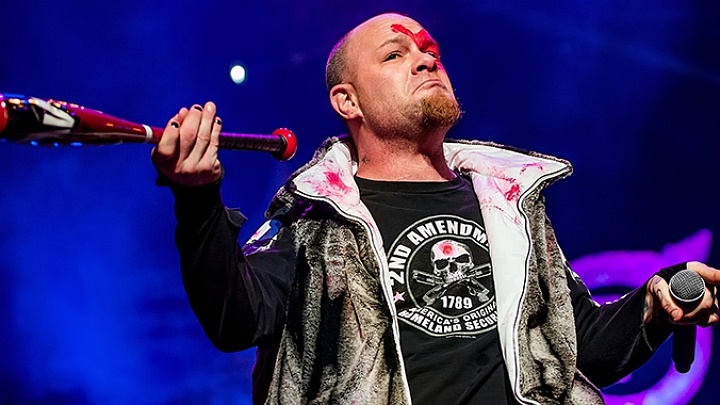 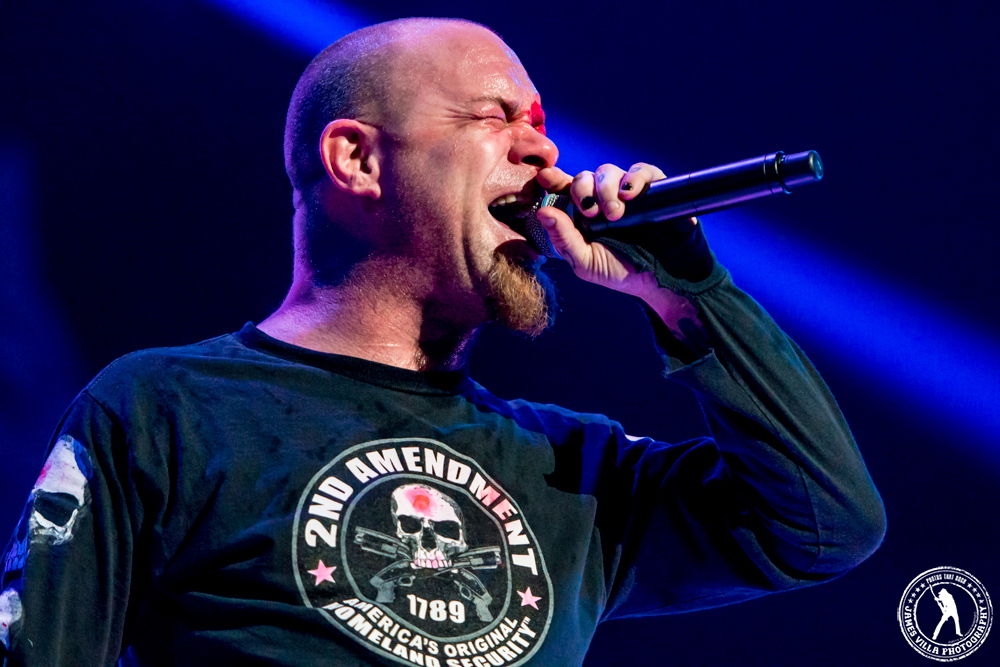 Five Finger Death Punch were the undisputed kings of the night; and a vast majority of the crowd were wearing different 5FDP shirts, anxiously awaiting the moment when their band took the stage.

The voice of Ivan Moody was heard even before they took the stage, as he half-joked that they needed to get some better music (a mix of pop and rap songs were playing over the PA system).

Shortly after was when the five guys made their way on stage; drummer Jeremy Spencer sporting some face paint that gave him a skeleton look, while Moody had a red palm print painted on the left side of his face and wielded a baseball with his right hand.

He used said bat often during “Under and Over it”, pointing out at the crowd on the chorus, “You can be me and I will be you, you can live just like a star…” Bassist Chris Kael was covering ground, running from one side to the other, demonstrating his superb bass skills, while Moody let the fans do some of the singing, dropping out at times, letting the legion of fans shout the lyrics at them.

“…Open this mother fucker up!” he roared, almost demanding a mosh pit. “It’s time! Let’s burn it down!” he commanded, setting up the track off the War is the Answer album, “Burn it Down”. He even changed some of the lyrics, fitting where they were for the evening, like singing “…Burn it down, ‘cause OKC knows…” on one of the choruses; and Zoltan Bathory was really caught up in it, spinning his head in a circular motion, which sent his dreads flying in the air.

“…You guys having fun yet?” Moody bellowed, before mentioning a recent interview he had done, where he was asked why Five Finger Death Punch fans were so crazy. That crowd embraced that comment, wearing it as a badge of honor, as Moody added they weren’t crazy, just “sincere”. “But I guess for some people, that’s just hard to see,” he finished, leading them into “Hard to See”, which really got fans’ blood pumping.

Lead guitarist Jason Hook got much of the attention on “Lift Me Up”, which was performed largely in darkness, allowing his guitar to light up, emitting a green light, which at times was the only thing visible on stage. Moody also took some time to give back to the fans, pulling off many of the picks Hook had attached to his mic stand, throwing them out to those in the pit. 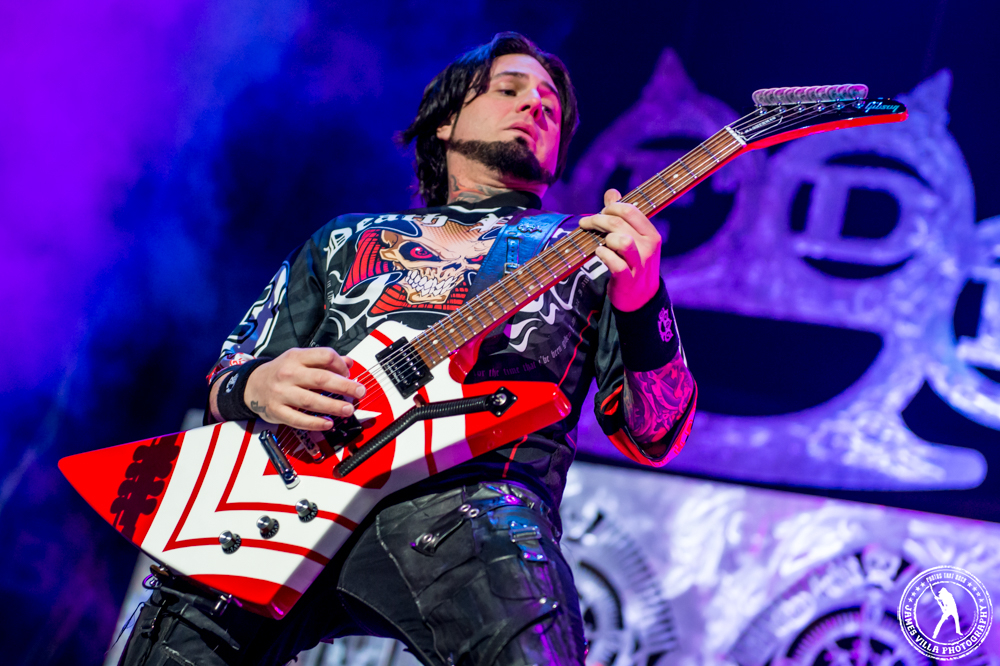 Perhaps the best moment of their set came when the band exited the stage, and after a few moments, Moody returned clutching an American flag. He held it out, and without him saying a word, the crowd began chanting, “USA!” over and over.

“…Brandon, turn that… damn spotlight off me! I am not Axel Rose, I don’t need it,” Moody informed their light guy after respectfully folding the flaq up. He then asked for anyone who had ever served in the military to raise their hands. The rest of the audience was then asked to thank those people for the personal sacrifices. Before he get any further, there was a disruption in the pit, and Moody was adamant that there would be no fighting. You could mosh all you wanted, but no fists should fly. He even stopped the show, informing one guy they wouldn’t do anything else until he fixed his attitude or left. No, he’s not the first singer to do something like that, but that’s still admirable, actually paying attention to what is going on out in front of you and making sure there is nothing even close to violence taking place.

Now, I have seen Five Finger Death Punch a few times already this year, but with the shorter sets they’ve had at all the festivals, I have never seen Spencer do his drum solo, something performed with devastating force; and afterwards, they switched gears, doing a more acoustic-based version of “Remember Everything”. It was absolutely striking.

They did a few more, keeping the soft-ish vibe up with “Battle Born” and “Coming Down”, before concluding with “Never Enough”. 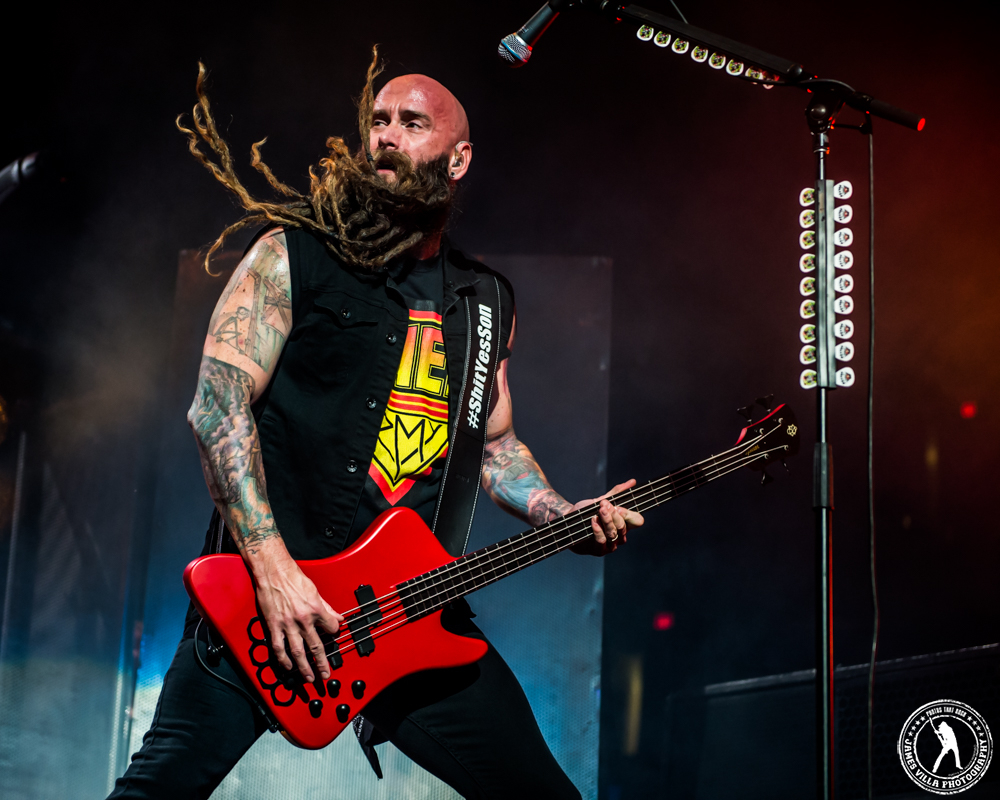 There was no way that was it, though. Surely not.

The encore consisted of three songs, eventually finishing up with none other than “The Bleeding”, and the opening riff alone was enough to send people into a euphoric state.

As I mentioned earlier, I’ve managed to see FFDP a few times at a few different festivals earlier in the year, but seeing them in an arena like this created a totally different environment.

Their fans appeared even more rabid than at those festival sets (that’s saying something), hanging on to every single note, completely captivated by this band that they clearly idolize. I was caught up in it all, too, especially since I had a better view of them this night than I had had before.

They have a ferocity about them that not many acts can match; and they handle themselves with ease on stage, while being constantly aggressive. Basically, they give their fans their money’s worth and then some, all the time, every time, delivering a caliber of show that a lot of bands these days just aren’t capable of.