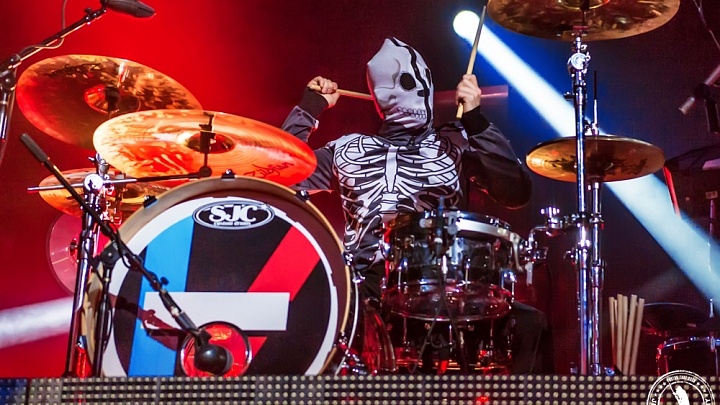 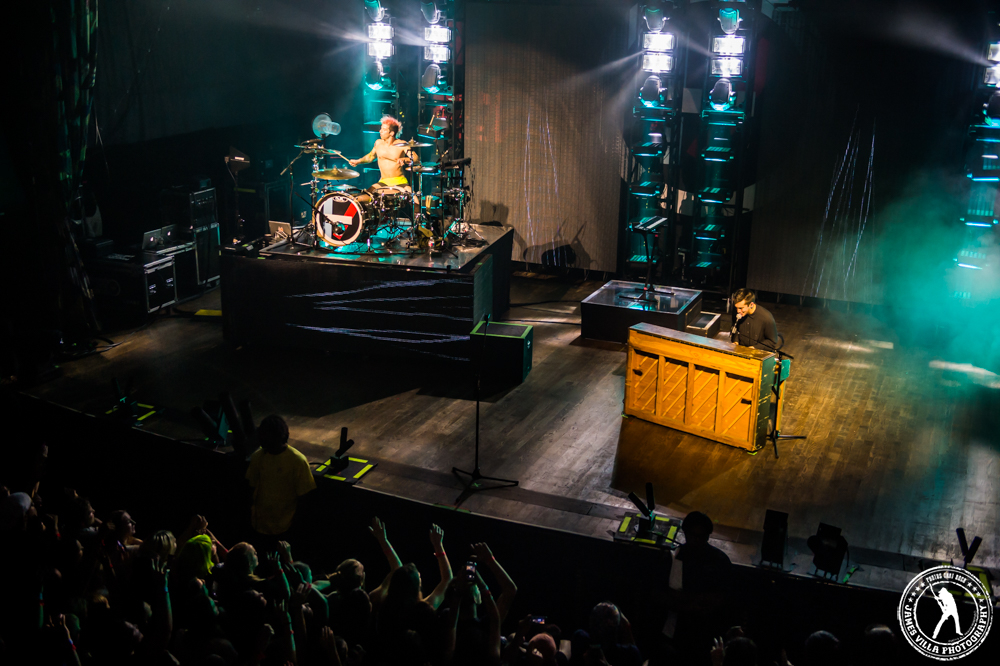 The Dallas “clique” has grown exponentially in not even a full year.That’s the term Twenty One Pilots uses for their fans; and while their show at House of Blues was sold out back in November of 2013, they still hadn’t achieved the more mainstream success that came earlier this year. Success that has made them so popular, that the duo had to do a two-night stand in Dallas (both shows sold out well in advance).

Vinyl Theatre and Misterwives warmed up the eager crowd, who let it be known just how excited they were by cheering almost anything that happened, even the piano being brought out and the drum kit being uncovered.

The shouts exceeded all of that previous noise once the band took the stage. Frontman and multi-instrumentalist Tyler Joseph stood atop the piano, while drummer Josh Dun threw his arms into the air to get an even louder rise from fans. As is standard, both were sporting their ski masks; and they set to work, opening with “Guns for Hands”. By the time the night was done, they would play all twelve tracks off Vessel and then some; and that vibrant, dance-like song had the whole room singing along.

Joseph utilized the fact that everyone was familiar with their stuff, allowing the audience to sing different parts of most of their songs, first giving it a whirl during “Migraine”.

They didn’t even need anytime to warm-up, going from 0 to 90 as soon as they hit the stage, with Joseph racing to and fro whenever he would break away from the piano. However, they soon slipped away into the shadows. Before they took the stage, a voice (similar to say, Siri on the iPhone, only this was a male voice with a British accent) had addressed the crowd, and now it spoke again. “…For when you remove the tricky tricks, only skeleton bones remain.” Fans knew exactly what that meant; and sure enough, the two musicians returned having donned their attire with skeleton bones drawn on it.

Joseph ripped his mask off as they hit the first chorus on “Ode to Sleep”. “LET’S GO!” he yelled, as he continued running around like a madman, alternating between the role of frontman and pianist. They then switched gears completely as he broke out his ukulele, doing a couple more originals with some interesting partial covers thrown in as well, ranging from DJ Khaled to Beyonce, all of which were done stemming from a “conversation” with Nigel. It was quite entertaining and amusing to fans, getting the laughs it deserved.

Vessel may have been the primary focus this night, though they also reached back to a handful of older tracks from their previous two records; and personally, I felt the best of all of those older ones was “Forest”. The rap portion it has is extremely aggressive, perhaps even more so than in any of their other songs; and Joseph jumped atop the giant drum riser when it was time to do it, making for a polarizing moment.

The vocalist got hands on with the crowd (literally) a little later on, when he eventually walked out towards the guard rail and then into the audience, allowing people to hold him up while starting “Holding On to You”. It came complete with an incredible toss of the microphone when he returned to the stage, throwing it high and catching it with no trouble whatsoever.

They continued bringing the crowd into it; from having them kneel down before jumping up on one song, to telling them to find a partner and boost them up on their shoulders during another track, and even had everyone jumping around during their closer, which came with a bit of sad news. In what was more like a spoken word piece, Joseph noted that this would be the final time they’d be in this city in support of Vessel.

The three-song encore was no less electrifying, and the first song came to a close with Joseph suddenly winding his way up to the balcony, causing everyone to look towards the upstairs portion. It was an amazing moment, though the best was yet to come. It was during the final song that Dun and Joseph each got out in the crowd on their individual platform with a bass drum on each. Confetti rained down upon everyone during the climax, as the adoring fans celebrated the band they so clearly love.

This night saw a completely different Twenty One Pilots then what the people of North Texas had experienced in the past. Before, Joseph was still in shock and awe over the fact that people knew these song he had written. Now, he appeared used to it, but never took it for granted.

Instead, it yielded an even stronger performance than what I had previously experienced from them (and that’s saying something). He knew just what all the fans were capable of, and he brought them into the show as much as he possibly could, which was quite often.

That’s what makes Twenty One Pilots so great. They write music to inspire and uplift. It connects with people, while their mentality is often that of, “We’re all in this together.” That was certainly how it felt this night. There was no division amongst anyone, even if the only common bond shared was the love of the Columbus, Ohio-based outfit, who is well on their way to becoming a phenomenon known round the world.