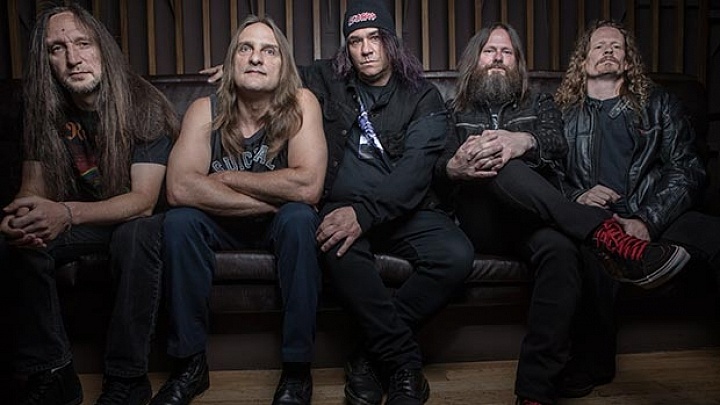 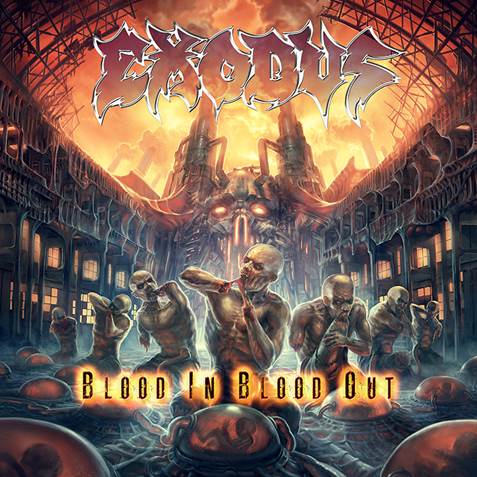 The wait is over! Today, Bay Area thrash metal pioneers EXODUS unleash their blistering new track ‘Salt The Wound’, which features an intense guitar solo from none other than originalEXODUS/Metallica guitarist Kirk Hammett! ‘Salt The Wound’ is cut from the new EXODUS album Blood In, Blood Out, hitting stores on October 14, 2014 in North America via Nuclear Blast. Listen right now, exclusively via RollingStone.com: http://smarturl.it/Exodus-SaltTheWound Guitarist Gary Holt explains that Hammett was more than ready to play on Blood In, Blood Out. “Having Kirk play on the new EXODUS record kind of came about after I played so many shows withMetallica while touring with Slayer over the past four year. It started the same way most of these things do, as a lot of chatter while having a good time, but Kirk was more stoked to play on the new record than anyone. He never got to play on anything with EXODUS since the first demo despite being a founding member, so I think it really meant a lot to him. Coming full circle so to speak. So I chose the song “Salt the Wound” since I thought the rhythm section for the first lead was right in his wheelhouse, and he killed it! He came in and busted out several takes and his solo compliments mine perfectly. Then we drank beer and ate barbecue! Epic time!” “It felt really casual, really cool – just like it did back in 1980 when we were all just hanging out back in the day,” Kirk Hammett stated to RollingStone.com in July. As announced last week, Kirk Hammett isn’t the only special guest to grace Blood In, Blood Out. Crafting an industrial sound bed on the intro to the album opener ‘Black 13’ is electronic music producerDan the Automator (GORILLAZ, MIKE PATTON, DELTRON 3030), and TESTAMENT’s Chuck Billy lends his signature roar to the track ‘BTK.’ We interrupt these important album details for a delicious story – EXODUS’ Gary Holt will appear as a guest judge on this week’s episode of Top Chef Duels on Bravo! The episode airs TOMORROW, September 10th at 10pm ET/9pm CT. The guest judges panel also features fellow heavy metal frontrunners Rob Zombie and Scott Ian, judging a full vegan meal. For more information on the show, the judges and the contestants, please visit: www.bravotv.com/top-chef-duels Blood In, Blood Out can be pre-ordered from the Nuclear Blast USA Webshop in CD, digi-pak, 2-LP exclusive yellow vinyl, and imported limited edition boxset formats.  Bundles include a t-shirt with exclusive artwork for North America + a poster (while supplies last). Also, anyone who pre-orders the new album on iTunes will receive an instant download of the new track ‘Salt The Wound.’ Get yours here: http://geni.us/exobiboitunes Track listing for the deluxe digi-pak version of Blood In, Blood Out is: 01 – Black 13 (featuring Dan the Automator) 02 – Blood In, Blood Out 03 – Collateral Damage 04 – Salt The Wound (featuring Kirk Hammett) 05 – Body Harvest 06 – BTK (featuring Chuck Billy) 07 – Wrapped In The Arms Of Rage 08 – My Last Nerve 09 – Numb 10 – Honor Killings 11 – Food For The Worms BONUS DVD includes: -“Blood Upon The Goat” making-of footage -Behind-the-scenes tour footage -Footage from Kirk Hammett’s Fear FestEVIL After Party at this year’s San Diego Comic-Con The digital version of Blood In, Blood Out will include the digital bonus track “Angel Of Death” (ANGEL WITCH cover). The album’s Japanese edition includes the “Protect Not Dissect” bonus track featuring Rat from THE VARUKERS/DISCHARGE. Produced by Andy Sneap (ACCEPT, KREATOR, MEGADETH), Blood In Blood Out features cover illustration by Swedish artist Par Olofsson (PSYCROPTIC, ABYSMAL DAWN, REVOCATION). EXODUS will join fellow metal titans Slayer and Suicidal Tendencies on tour this November! The Scion-sponsored leg of this U.S. tour launches on November 11th with two shows at The Fox Theater in Oakland, California.  The 26-show trek includes nine headlining off-dates with additional performances to be announced soon.  Tickets are on sale now via the links on the official EXODUS Facebook page. Due to the overwhelmingly demand, EXODUS VIP Experience packages are now available for the entire tour via SLOtix.com. Visit the site for tour package details. All EXODUS VIP Experienceattendees will be included in a giveaway for either an autographed Gary Holt signature guitar or an EXODUS guitar.  At the end of the tour, Gary Holt will personally call the winner himself to announce that they’ve won!

Additional shows will be announced soon.

Tickets are on sale now via the links on the official EXODUS Facebook page.   ABOUT EXODUS With a career spanning 34 years, EXODUS have not only helped shape and define the thrash metal genre for over three decades, but continually seek to raise its standards. One of the forefathers of the Bay Area scene that became known and envied throughout the world, the band’s 1985 debut album, Bonded By Blood, has since become a legacy album featuring mandatory live staples such as “Strike Of The Beast,” “A Lesson In Violence,” and the album’s title track. Formed in 1980, the band’s original members included Tom Hunting on drums, Kirk Hammett (Metallica), Tim Agnello on guitars, and Carlton Melson on bass. With a line-up that has evolved throughout the years, the current incarnation of EXODUS charges into the future with returning frontman Steve “Zetro” Souza on vocals, Gary Holt and Lee Altus on guitars, Tom Hunting on drums, and Jack Gibson on bass. In 2014, EXODUS closed the first half of the year with stellar performances at Kirk Hammett’s Fear FestEvil and Rock On The Range, as well as a groundbreaking tour with fellow thrash legends Slayer and Suicidal Tendencies. To date, EXODUS has released nine studio albums, two live albums, and one compilation. Their most recent release, Exhibit B: The Human Condition, debuted in the Billboard Top 200 Albums chart in 2010.   Visit EXODUS online at www.EXODUSATTACK.com. Like: www.facebook.com/EXODUSATTACK Follow: Twitter.com/_EXODUS Watch: www.YouTube.com/EXODUS