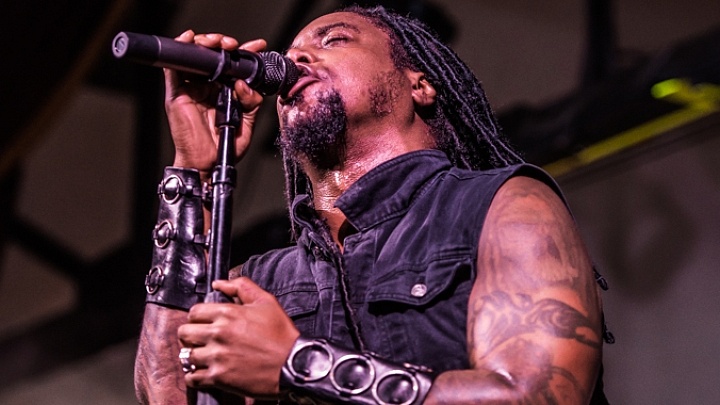 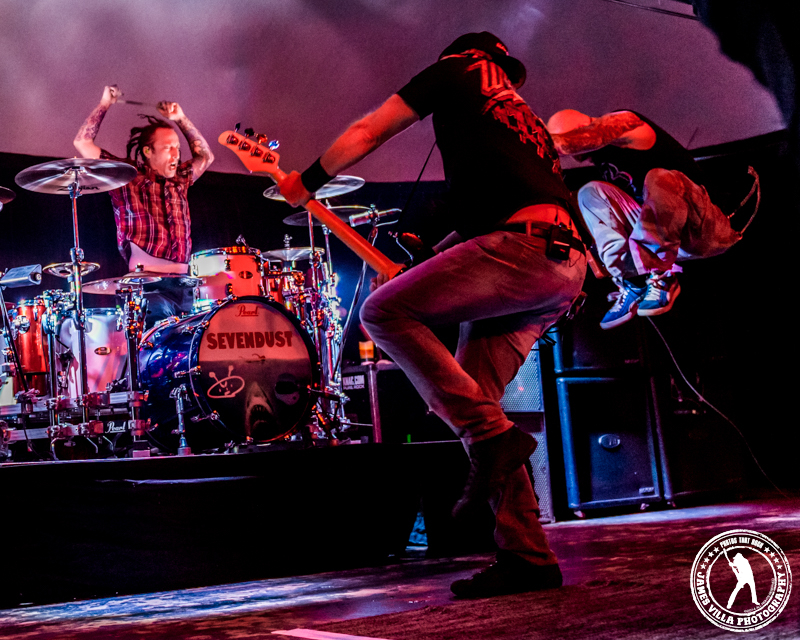 For a Tuesday night, the historic Cain’s Ballroom in Tulsa, Oklahoma was pretty crowded. Several hundred people weren’t going to let the fact that it was early on in the work week stop them from seeing Sevendust. The lone Oklahoma date on their current tour was also one of the last shows of this run. Just because it was one of the final dates didn’t mean they were going to let any wear and tear from their weeks on the road show, though.

Their start time was set for 9:30, and literally as soon as the clock struck 9:30, a couple stage hands rushed out and ripped down the Sevendust banner that had been hanging across the stage all night. Now the back half of the stage was revealed, along with Morgan Roses’ drum kit and all the other gear.

One by one, the band filed on stage, and the already eager crowd was growing more excited by the second and packed in as tightly as they could. John Connolly stepped back and did a fist bump with Rose; and soon, Lajon Witherspoon joined them, and their intense set began with the brutal, “Pieces”. “Let me see your hands in the air! Like this right here!!” Witherspoon roared before they even got the song underway, and he led by example. Bassist Vince Hornsby got a clap along going at one point during the track; while Witherspoon continued pumping everyone up by telling them he wanted to hear them make some noise, or even bounce up and down.
/div>
One fan was so pleased by the performance so far, he took his hat off for the band and held it up in the air. “Cain’s Ballroom, are you guys happy to see us tonight?” Witherspoon asked after they had finished the song. Yeah, I’d say the people were happy to see them. Soon, they launched into another beast of a track: “Face to Face”. Connolly and fellow guitarist Clint Lowery, as well as Hornsby continued racing around the stage, while Rose showed off the trick skills he has perfected as a drummer, like throwing one of his sticks high into the air before catching it. (Even that paled in comparison to one of his later stunts, where he placed a drum stick on the right side of his neck, then rolled it around on his neck over to his left side.) 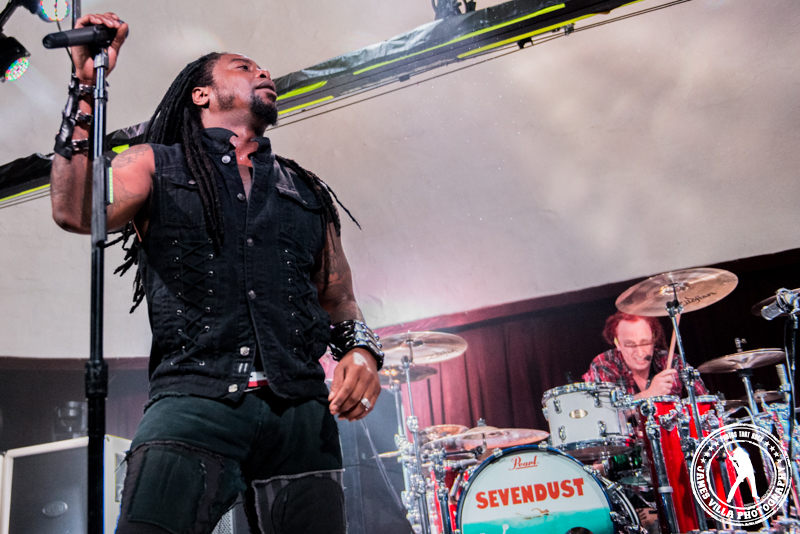 “…I’d like to see you dance…” Witherspoon asked of the crowd before “Till Death”, which I think evoked more head banging than it did dancing; and the fans were more than happy to pump their hands in the air when Witherspoon asked to see them. “I think you look beautiful tonight…” he told the spectators, before they continued the onslaught of massive songs with “Denial”, which saw Hornsby getting a broken drum stick from Rose and then throwing it out to whoever was lucky enough to catch it in the crowd.

“From front to back, I want to see everyone bouncing!” shouted Witherspoon as they bridged that track right into “Praise”; and once it had concluded, he checked with everybody to make sure it sounded alright to them. “Do you believe in karma in this town?” he then asked, before posing the question again. “I believe in karma,” Witherspoon added, before his band mates started them off on “Karma”, a song that was so well received by fans, the room was filled with loud whistling once it was over.

“Enemy” was dedicated to the United States and the men and women fighting for its freedom; while the patrons were told they would all know what came next. “Angel’s Son” was one of a small handful of tracks that highlighted what beautiful tones Witherspoon is capable of. Yes, his ferocious voice is perfectly suited for their deafening rock anthems, but on songs like this —which was largely acoustic sounding at times — it was bone chillingly gorgeous. “Woo!” the frontman exclaimed upon finishing the track, seeming to be riding a high from it. They followed that closing number from the Animosity album up with another cut form it, and “Trust” was another one fans loved.

Fans were every bit as engaged now at the end of their set as they had been at the start, still singing along to every word, jumping when they were instructed to, and some even had a large circle pit going in the middle of the room. I think it got a little more physical during “Strong Arm Broken”, to the point Witherspoon mentioned in the next break he didn’t want to see any ladies falling, and urged the women to avoid the men and vice versa. “Would you like to hear a song called Decay?” he then asked, as they concluded their 54-minute long set with the lead single off Black Out the Sun.
Fans wanted one more, but the band made them work for it. I actually liked that, and even though you knew they would be back, it was refreshing to see a band take several minutes out, verses most of the others I see, who, within a minute of disappearing back stage, come back out. 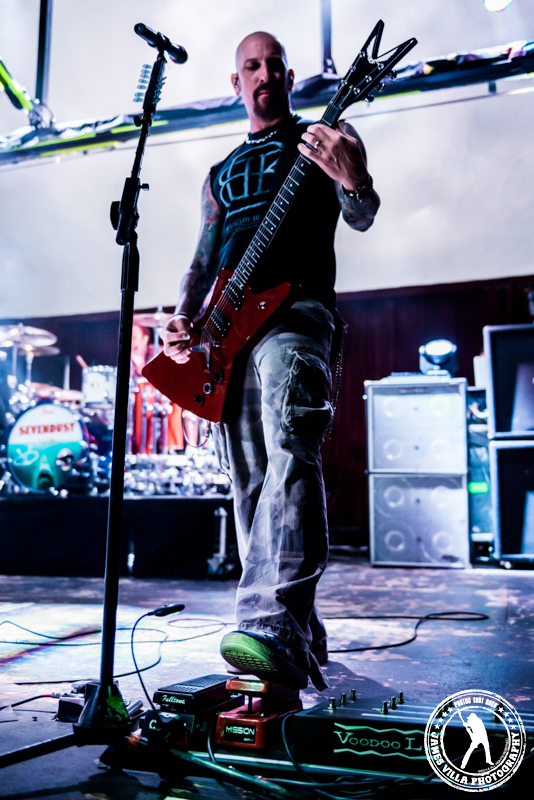 “Sev-en-dust!” the audience shouted repeatedly at one point, as they stamped their feet on the floor to accent their chants.

“…We were told they didn’t think anyone would show up…” Witherspoon mentioned once they retook the stage, which drew a booming response from the patrons.

The encore consisted of “Splinter”, and they had some help on it. Early on, Aaron Nordstrom of Gemini Syndrome (their tour mates for this tour) ran on stage, mic in hand. Nordstrom did more co-singing with Witherspoon than just simply backing vocals, and the two frontmen played off one another, doing a lot of interacting; while Lowery, Connolly, Hornsby and Rose gave every last bit they had in their tanks.

This marked my first ever Sevendust concert and they did not disappoint. I was impressed with their high-energy performance, which never tapered off or relented. They started out by giving it their all, and kept finding different reserves to tap into to make their performance even more dynamic and explosive.
For me, it’s often easy to find one band member I like the most and focus on them, but that was impossible to do with Sevendust. At times, it was the mighty Witherspoon who captivated your eye. Other times perhaps it was Connolly, Lowery or Hornsby; and then, while watching one of them, you’d catch Rose doing something, and quickly shift your attention to him.

They were an unstoppable force here at Cain’s Ballroom; and they had their fans enthralled for every single second.