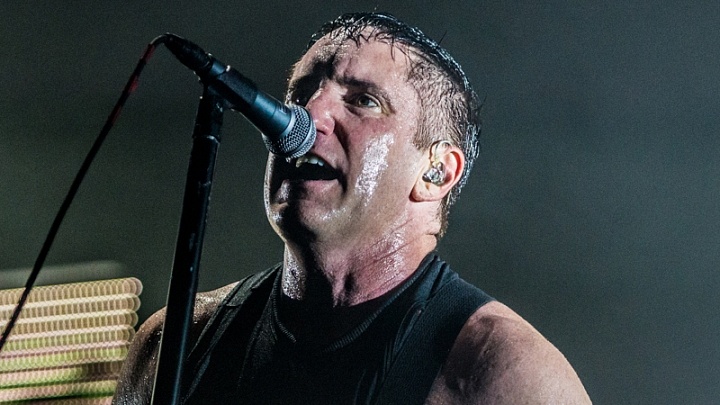 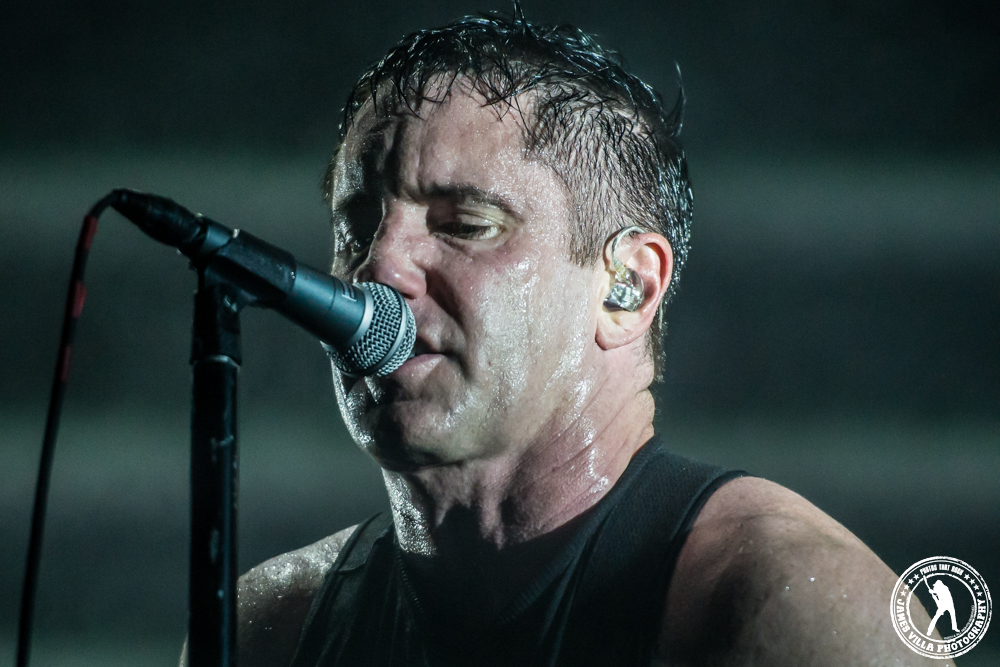 It looked like Nine Inch Nails wasn’t going to make their 9:30 start time at Gexa Energy Pavilion in Dallas. The crew was still setting things up, while the bright lights still flooded the stage and all the sections of seats in the covered portion of the venue.
People were just chilling, no doubt checking up on all their social networks, as many had their phones out, while plenty more had left to go get some more drinks or food.

Suddenly, some sharp cries of glee rang out, and they only grew louder with each second. Trent Reznor somewhat jogged out of the wings of stage left, in a manner similar to how a boxer enters the ring. It was actually quite appropriate; and given Reznor is one of the biggest figures in music, it was refreshing to see a person of his stature make an entrance that was completely lacking any grandiose appearances.

He was simply a man getting ready to go to work. 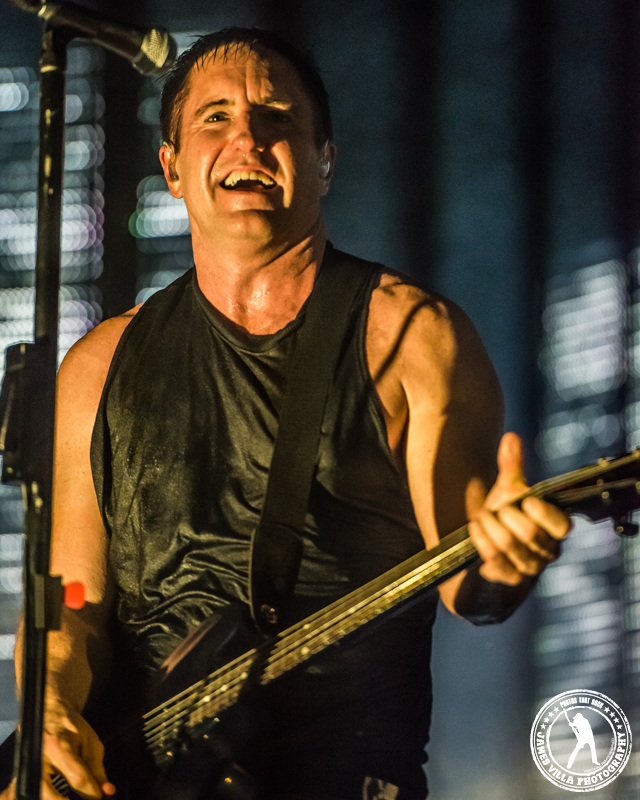 Of course, there would be plenty of hits in this show, but first, Reznor and his cast of live musicians had to show off some new material, like the second single from last year’s Hesitation Marks, “Copy of A”. At first, it was just him and his synthesizer, though some of his band mates gradually filed on stage. The pinnacle moment of the song came when Reznor was handed his guitar, and he instantly began to shred, shortly before the lights suddenly dimmed drastically.

The visuals they implemented were stunning; and as they continued with that number, a series of screens appeared behind each of the four members, with their silhouettes being cast on them. The lights — all of them — went out as the song concluded; and they reached back to album number one, pulling out “Sanctified”. The dialogue was minimal. Then again, I doubt anyone was here hoping to have a one-sided conversation with Trent Reznor. They were here to hear him play his music and NIN barreled on by going straight into “Came Back Haunted”, which wrapped up with Reznor shaking a tambourine around.

The screens that served as their backdrops had been moving around throughout each song, and now two were spread apart to reveal the drummer and his kit, as they got more into a rock section with “1,000,000”. “Come on…” Reznor shouted as they continued the non-stop action with “March of the Pigs”. He kinda trailed off each time he sang, “Now, doesn’t it make you feel better?”, which allowed the voices of all the fans to surge as they helped in singing; and they were more than ready to clap along when Reznor began striking his hands together to the beat. 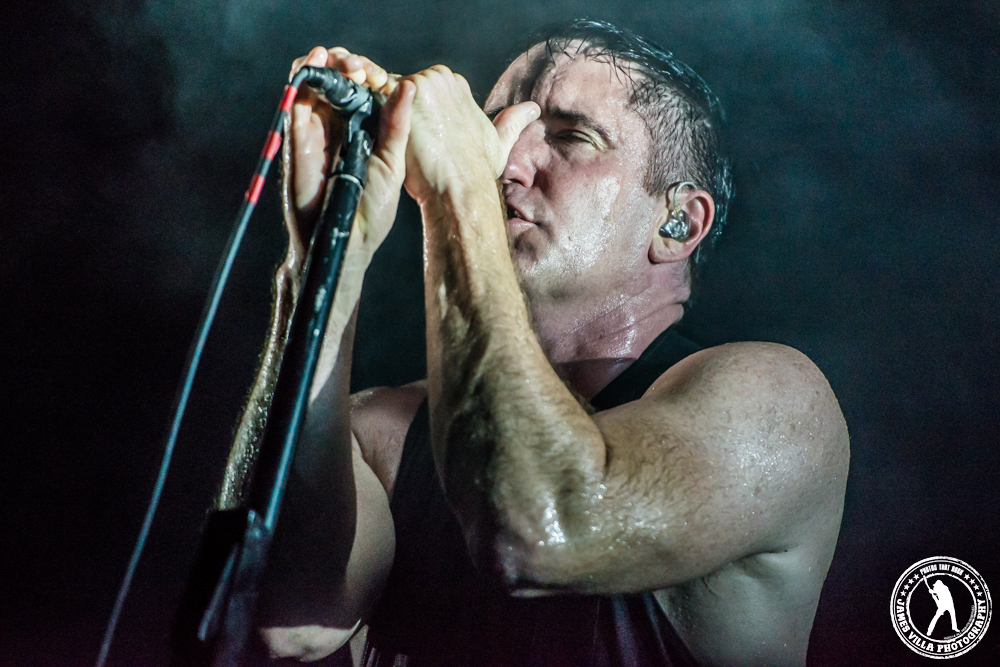 The theatrics continued during “Piggy”, which saw a stage hand shining a light right onto Reznors’ head, as well as on their guitarist, when he let loose a sensational guitar solo. Soon enough, they got to “Closer”, and the stage was bathed in a bloody red light. Two of the screens at center stage showed what was clearly Reznors’ face, as he leaned into and then pulled back from the camera that was capturing it. It was only when those two screens were pulled apart around the first chorus, that the audience glimpsed him performing solely for the camera, which in turn was broadcasting to the screens. His attention then shifted to the audience, and nearly everyone appeared to be signing along to that hit.

“Gave Up” really got the blood flowing (and heads banging); while more dazzling visual effects came on “Disappointed”. “Thank you very much,” he told the crowd right before the “The Great Destroyer”, and it was during the long synth/key solo at the end that Reznor seemed completely immersed in his element. That’s not to say he hadn’t been a force to be reckoned with as a frontman, because the way he conducted himself and how he handled that microphone stand was something to marvel at. However, he also looked just as much at home hunched over the synth. 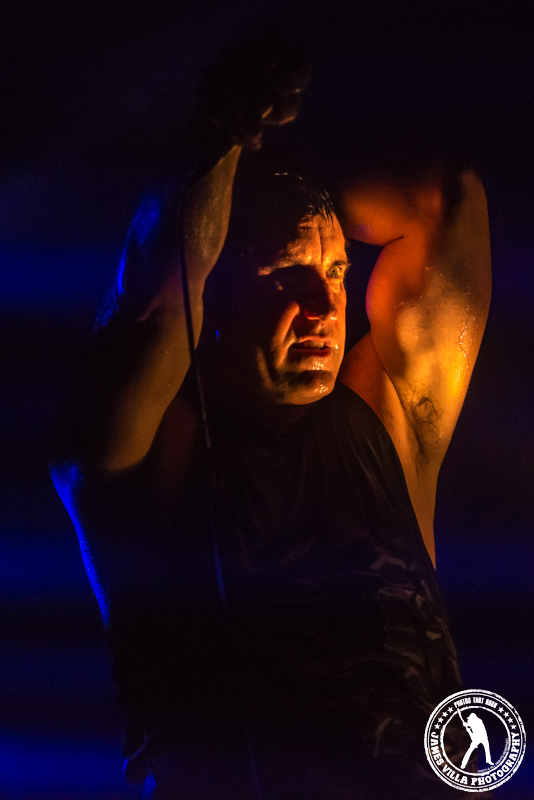 “Eraser” was another track fans (obviously) went wild over; and the night hit a fever pitched rock atmosphere with “The Hand That Feeds”, while “Head in a Hole” wrapped up their set.

That couldn’t be it, though, and the crowd was relentless in screaming for more, until they returned to the stage and delivered the powerful, “Hurt”.

This was the first time I had ever seen Nine Inch Nails. I’ve heard tale of how great their live performances are, but I was not prepared for what transpired.

The energy Reznor possess draws from what seems to be a bottomless well; and with each song, he just got more and more into it, right up until the very end, when they had nothing left to give song wise.

It was all left out on the stage. The visual aspect of it all was incredible, too. To be honest, I’m not always a fan of stuff like that, but not only does it fit with the industrial sound Nine Inch Nails has, it’s also every bit as creative and mesmerizing as the music is. It actually adds to the show without taking focus away from the band, and that is not always an easy thing to accomplish.

Fans left satisfied, most likely already running over the entire show in their head just to relive it.

One thing was proved this night: Trent Reznor helped make industrial rock what it is today, and Nine Inch Nails is still the undisputed king of the genre.