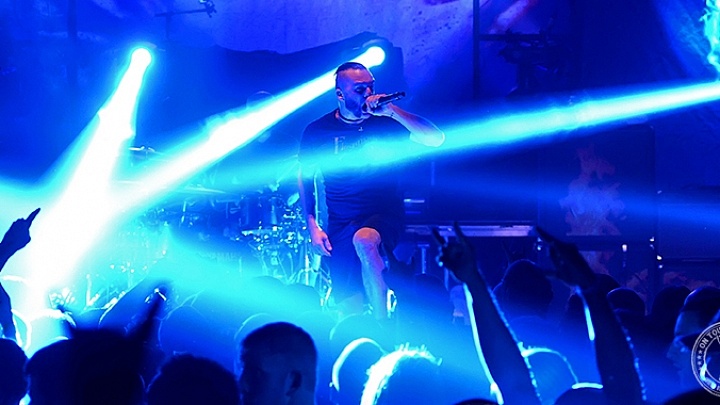 Killswitch Engage, who are currently touring in support of their newest release Disarm the Descent, without a doubt set Verizon Theater in Grand Prairie ablaze. KSE are part of a co-headlining trek with the mighty Lamb of God, and heavy hitters, Testament and Huntress.

Killswitch Engage is without question one of my all time favorite bands. I fell in love the moment I heard, “Last Serenade” from the Alive or Just Breathing album in 2002. It’s no secret this band has endured dramatic changes over the years, beginning with the exit of original vocalist, Jesse Leach, shortly after the release of the their first album. Now with the recent departure of Howard Jones, who replaced Leach as KSE’s vocalist, die hard fans are ecstatic to welcome Leach back to Killswitch Engage.

The band walked on stage to Survivor’s “Eye of the Tiger”, along with the usual hilarious “heavy metal overdubs” provided by guitarist Adam D. Soon after the intro, they dove right into “A Bid Farewell”, an obvious crowd favorite, because if you were sitting next to the pit you could literally feel the floor shaking.

Their setlist was a solid mix of all five studio albums. The heaviest of their heavy songs, and the absolute best of their more melodic songs.

I could sit here and talk about how the band sounded and how the crowd reacted during every song, but I would literally be repeating the same thing thirteen times in a row. They were flawless, and yes, it really was just that damn good. “A Bid Farewell” and “My Last Serenade” made me remember why I love coming to metal shows in the first place, and songs like, “Rose of Sharyn,” and “The End of Heartache” continue to strike a chord. You can’t deny the heart and soul poured into those songs, and the crowd threw that same love right back to the band that night as the crowd screamed the choruses over Leach at times.

There’s not much more you can ask for in a live show. Combine their astounding energy with Adam D.’s stage antics—and at this point, rather famous show attire, and you’re guaranteed to have the time of your life that night. I’ll admit that I was nervous to see how this band would continue on after the exit of Jones. But Jesse has more than proven that he still has the drive and passion that made us fall in love with Killswitch in the first place. After closing with “The End of Heartache”, they promised to be back soon, and I hope they will.