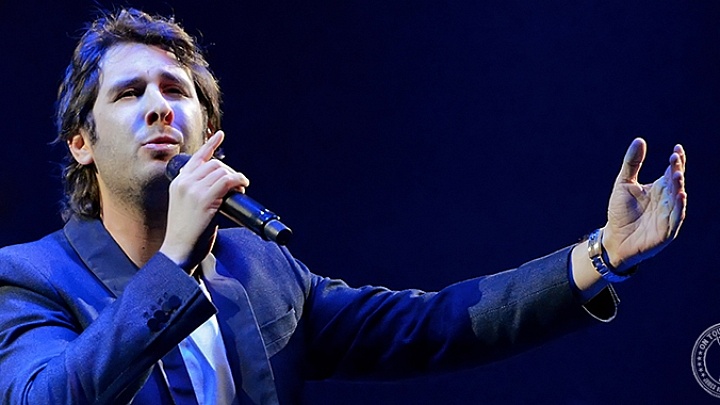 It’s hard to get tired of Josh Groban, not that you would ever want to.

The fresh-faced, adolescent charms that have endeared him to millions over the years have not been lost on the singer 12 years after he first entered the public domain. Josh may have a grown up voice, but the man inside is still a boy at heart. Seriously, name me an artist today who could get away with singing Happy Birthday to a fan, yet somehow combine the jingle to include dingle berries and poop and have the audience roaring with approval. That’s the mystery, and the beauty of this extraordinary artist. 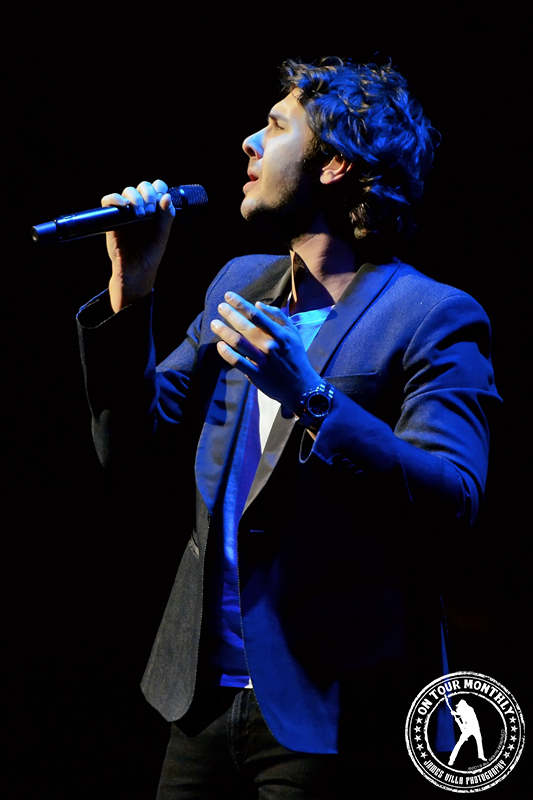 Groban’s appearance at the American Airlines Center was just as heartfelt and funny as previous tours, only this time he chose to perform in the round. This was the final night of his 23-city fall trek, and the California native made sure it was a memorable one.

Before the evening unfolded, the singer graciously met with several members of the Dallas Children’s Theater to give them support and encouragement. That generosity extended to his opening act as well – Judith Hill. Fans of the reality show, The Voice, will remember the polished Hill being sent home in a shocking viewer elimination vote. Her ouster caused coach, Adam Levine, to mumble under his breath “I hate this country!” while he was backstage pondering why his protégé had been sent home. The unfortunate remark was inadvertently caught on a mic, and the Maroon 5 singer had to backpedal quite a bit, but the candid viewpoint was understandable. Tonight’s audience, however, had no problem recognizing Hill’s talent and gave her rousing ovations throughout her half hour set.

The self-professed ‘nerd in high school’ hit the stage running promptly at 8:30 and launched into “Brave” and “False Alarms”, two numbers he co-wrote on his new album, All That Echoes. The intimate feel of the unique stage set up was really felt when Groban mouthed the opening words ‘Starry, starry night,’ from Don McLean’s beautiful composition, “Vincent.” The full special effects of the stage were put on display during this touching number that left the crowd in a sort of cosmic lit twilight zone.

For the adoring fans that have watched the fresh-faced Groban – does this guy ever age – mature before their eyes over the years, his charismatic and playful side has remained intact. At one point during the show, Josh decided to do a Q&A with the crowd. A list of questions from the audience had been submitted for the singer to answer. From there, he’d point the person out and read their question. One audience member asked the entertainer if he could take a door to the future, or one to the past, which one would he select. After some misgiving about the future, Groban expressed a desire to return to the past when he wore his beloved red-felt onesie as a toddler and watched Saturday morning cartoons all the time.

After the audience stopped laughing, another question was lobbed his way that actually caught the singer off guard. “You are the owner of the most advanced outhouse company to date. What is your jingle?” Without skipping a beat, Groban walked over to his piano and belted out the words dingle berry and poop before tossing the entire idea literally went down the toilet. He quickly rebounded when a fan, who had been listening to his music since the age of three. She asked for him to sing happy birthday to her. The song quickly devolved into a “Grobin’s Outhouse Happy Birthday” greeting. I’m sure the tune probably took the teenager back through her own door in time when she was wearing a onesie like her stage hero once did.

All kidding aside, Groban had no trouble sharing the spotlight with his band. A magnificent instrumental of the Aerosmith classic, “Dream On” featuring Christian Hebel on violin, was especially entertaining to watch. Steven Tyler’s ‘voice’ never sounded better, especially on the high notes. Another poignant moment in the show came when Judith Hill returned to the stage – she had earlier appeared to accompany Groban on the song “Remember When it Rained” – to duet on the moving number, “The Prayer.”

The evening would end with Groban’s popular rendition of the Secret Garden composed, “You Raise Me Up”. The singer brought the Turtle Creek Choir onstage to accompany him on his signature tune. The final notes to the two-hour extravaganza belonged to the appropriately titled “Smile”. The timeless music was written by Charlie Chaplin – yes, the film icon was also a songwriter – and was the perfect song to end the night.

Personable, likeable, funny and insanely talented pretty much summed up this evening with Josh Groban. Tonight, thousands got caught up in the singer’s ‘cult of personality’ and weren’t in the least embarrassed to admit it. Talk about revenge of the nerd!