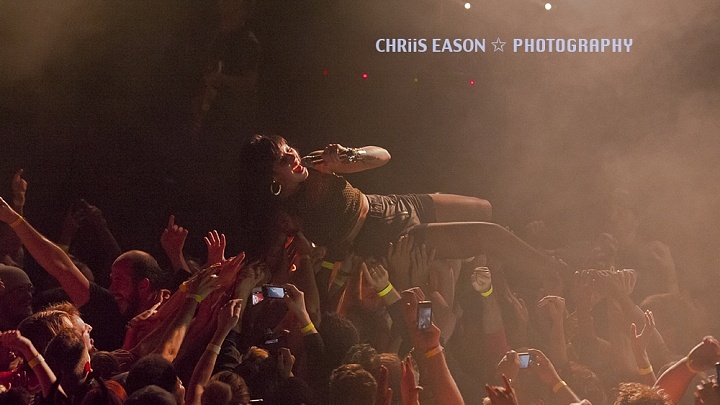 When it was announced by Sleigh Bells singer Alexis Krauss that her partner in distortion and feedback, Derek Miller, had forsaken beer cans and chicken wings for bowls of granola and fruit and water, you had to wonder if their approach to music had taken an about face turn as well.

In what’s becoming a yearly trek for them, the Sleigh Bells are on the road once again with another new product to promote, Bitter Rivals. This recording is a companion piece of sorts to 2012’s Reign of Terror with elements of their debut, Treats, thrown in for good measure. In other words, the music is still loud and noisy with several sonic twists and vocal shrieks that still induces that inherent tension in the duo’s compositions. 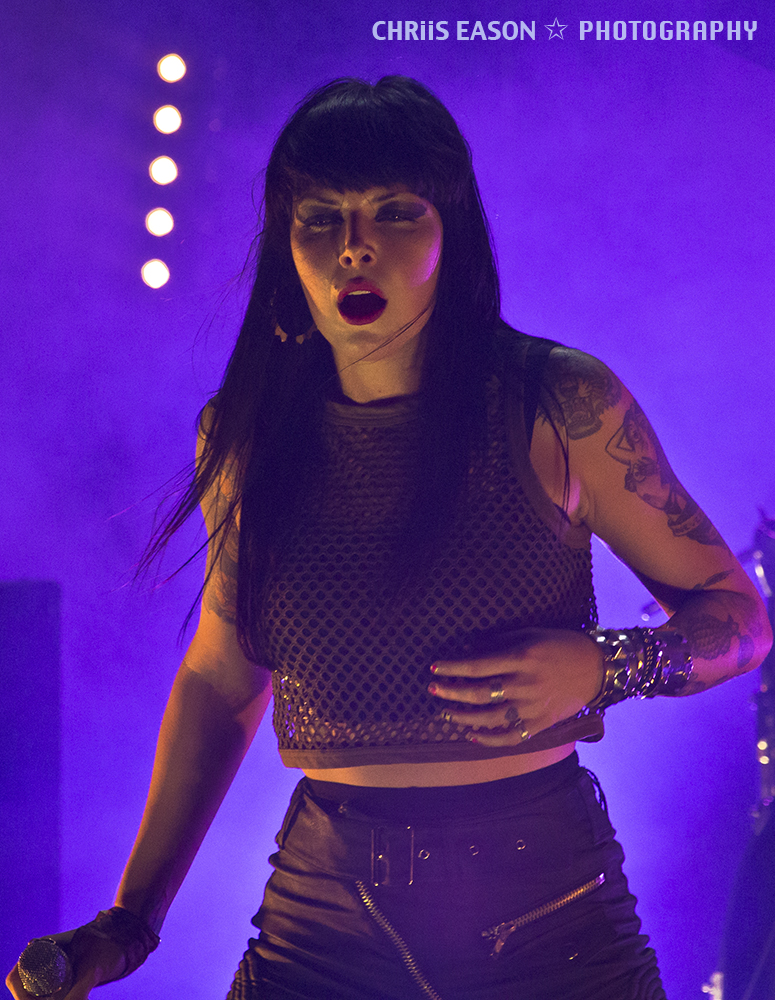 If anything, the wall of sound wailing out of Miller’s guitar still deafens the crowd and numbs the senses. Krauss stills shimmy’s and shines as she chants and groans out lyrics in trance like fashion on stage. The light show, well, it only adds to the mystery of a sound that really makes absolutely no sense unless you think you’re a cool hipster. Even then, you have absolutely no clue to what the Sleigh Bells are all about. But you know what, who really cares?

It certainly didn’t matter to this sold-out crowd at the Granada Theater in Dallas, Texas. The audience swayed their bodies to mimic Krauss as she weaved seductively around the stage. They bobbed their heads to every bold reverberation Miller’s guitar made. For the first time, the band even brought with them an actual live drummer to amp the noise up to the nth degree. I’m still trying to wrap my mind around the abrasive vibrations and swirling images that are still swimming around in my head.

Today, journalists and fans alike are inundated with new terms to define a sound. And when it comes to the Sleigh Bells, well, they have managed to get lumped into a category very few acts occupy – noise pop. What it means I doubt anyone really knows. When you look up the definition, the fancy terminology used to describe the expression makes as little sense as the Sleigh Bells themselves. And tonight, while tolerating all the guitar feedback and distortion Miller’s guitar was constantly producing (thank God for good ear plugs), I can safely say that this Brooklyn act is more of an endurance test than anything else.

I’ll be honest. If you’re over 40 and this band appeals to you, good luck. Sleigh Bells is a real challenge to understand, let alone appreciate. If you haven’t ‘got’ what the Sleigh Bells are all about the first time you hear them, you never will. I didn’t get anything but the endless distortion and whiny vocals the entire night. If anything, this music really punishes the sense – particularly hearing – to the point you’re numb when the experience is over. As for the lyrics, I believe the very last song of the night, “A/B Machines” from the debut Treats summed things up perfectly. The composition consists of 14 words, which this crowd chanted over and over again. “Got my A machines on the table / Got my B machines in the drawer.” Unbelievable!

Sometimes a band will surprise you as to how good they are when you encounter them for the first time. On other occasions, the initial encounter will leave you shaking your head wondering why you’re there. And then there is the rare instance where your ‘first encounter of the third kind’ leaves you scratching your head mumbling to yourself, “Huh?” The Sleigh Bells fall into that last category.

Krauss and Miller have been able to retain their ‘new darlings to the Indie Pop scene’ title for three years now, but signs they are becoming prisoners to their own sound are starting to show. First off, they returned to the smaller Granada Theatre, as opposed to the larger House of Blues they played last year. Second, they are part of a movement in music that never has a real name because it is always fluid and changing. If anything, this current trend is a visual and audio rehash of punk tidied up and reclassified as a new genre. That’s never a good sign for career longevity.

I seriously anybody out there can describe to me in layman terms exactly what Indie Pop, let alone noise pop, actually means. When I hear loud noise out of guitar, I want it to really mean something. Derek Miller will never be mentioned alongside guitar greats like Joe Satriani, Steve Vai, Joe Bonamassa or a host of other rock guitarists that inspire others to pick up the instrument. Manipulating sound to the point it’s an excruciating and painful experience to endure loses its luster the first few songs you’re exposed to it.

Here’s the problem with the music business today, especially the nascent stage of the Internet age the industry as a whole has entered. Too many journalists, or those that think they’re scribes because they can blog on the Internet, are desperately trying to portray themselves as cool by latching on to the Sleigh Bells. These ‘in the know” writers are obsessed with this Brooklyn duo not because the music speaks to them. No, the Sleigh Bells are merely different, and the relationship between Krauss and Miller creates an exotic chemistry today’s youth find very attractive.

I’m not saying that’s a bad thing either.

Whatever attracts the masses and the media to a group in the always overcrowded music field is fantastic for the band itself. I’m a rock and roll guy. I make no apologies for it either. So, before I get a headache overthinking something I still don’t quite understand, I’ll be brief. The Sleigh Bells are the darlings of a scene that will never be truly defined. They will continue to draw positive attention from journalists trying to be cool and hip. Hate to say this, but this is a recipe for a very short-lived career.

This is the Sleigh Bells third new release in as many years. This dashing duo has managed to make a pretty good living out of disturbing sounds backed by equally compelling shrieks, groans and sometimes lyrics. Critics and fans throughout the country are probably raving right now about how Krauss and Miller’s music is evolving and becoming more sophisticated. Bully for them. When a duo like this can create a sensation based solely on sensory overload, it gives all types of up and coming musical acts confidence that they too have a future. God Bless the Sleigh Bells for instilling that type of hopefulness.