Michael Buble Wins Me Over in Dallas 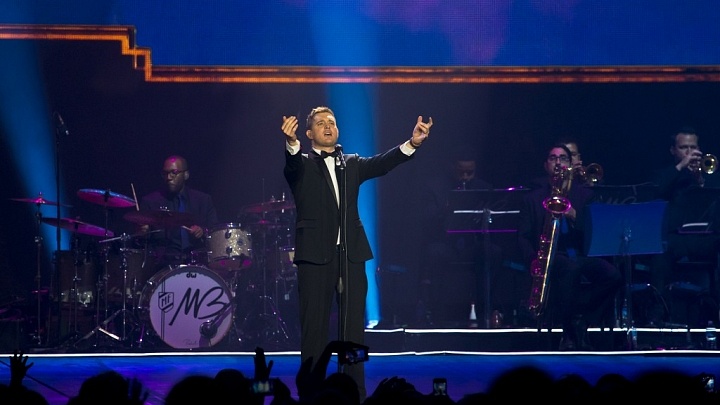 As I was sitting in my seat surveying the sold-out crowd that eagerly awaited the appearance of Michael Buble, I kept thinking to myself, “What do these people know about this guy that I don’t?” Certainly I had heard of the Canadian crooner, but to my knowledge, he was just a slick 21st Century version of Frank Sinatra. In due time, I was about to find out how seriously wrong my assessment of this artist truly was.

I have been covering the music industry for some 35 years, but that doesn’t mean I know it all. My forte, and main love, is rock. Everything else is a diversion as far as I’m concerned. But there have been a few times in the past were I ventured outside my comfort zone to check out an artist because my curiosity got the best of me. Tonight was such an occasion. 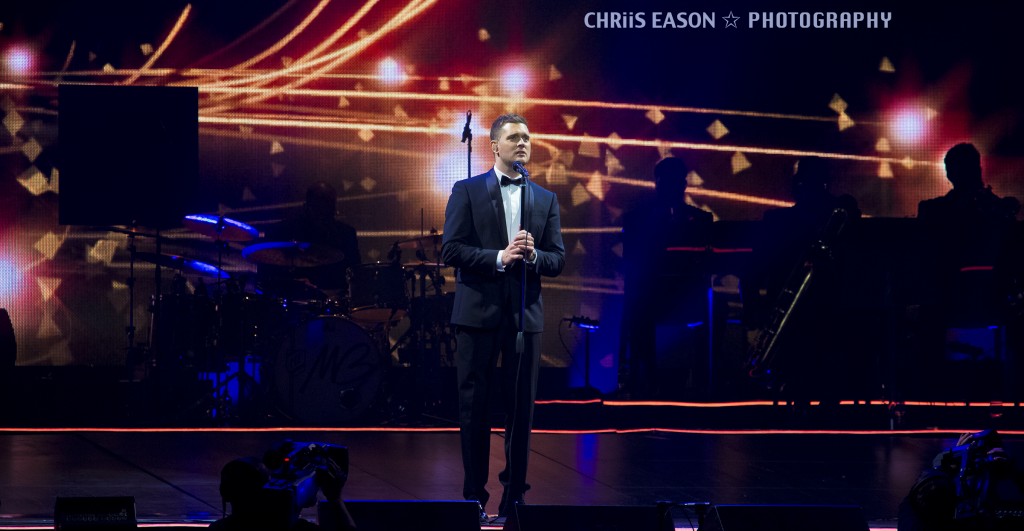 They came in all shapes and sizes. From 80 to 8 years old they entered the American Airlines Center drawn there by a singer / songwriter with the ability to effortlessly breathe timeless music into an old-school microphone (no wireless for this guy). As I walked around the concourse, it dawned on me that my pre-assessment of Michael Buble was way off base. I was about to witness one of those very rare artists whose appeal crossed generations.

The merchandise booth is the place to be if you really want to see the cross-section of people who have come to see an artist you know little about. Seriously, young and old alike with doting dads, moms and husbands flocked to purchase a wide assortment of items. If you wanted to sleep with the sexy singer – figuratively speaking of course – you could purchase adorable pink Tank Tops or T-shirts with matching gym trunks to put you in the perfect dream state. If you just needed to have your picture taken with the handsome singer, there was a giant life size poster for you to pose with. The bottom line – if you were into all things Buble, your every wish and desire could be accommodated for a modest price.

Over the years, I’ve learned you can tell a lot about an artist by the opening acts they bring on the road with them. With that said, I want to give Buble some major props for selecting an excellent opening act, Naturally 7. This ‘a capella’ act out of Brooklyn, New York was simply amazing to watch. The fact they performed all their imaginary instruments using vocals simply blew me, and I’m sure this sold-out audience, totally away. The faux drummer was amazing, as were his fellow guitar and bass players. The vocal harmonization was magnificent as well.

The group kicked off their set with the Seals & Croft classic, “Summer Breeze”. Their literal interpretation of Cream’s “Sunshine of Your Love” was stunning to watch them act out. For this group of extremely talented vocalists to perform this legendary tune sans instruments, other than what they created out of their mouths, had this audience absolutely hooked. If they ever come to a town near you, I highly recommend you make the effort to attend.

When the house lights finally went down, the anxiety in the crowd was hotter than the flames that shot out from the stage to introduce the fiery first number, “Fever”. Buble, who was dressed ever so GQ-ish in a black tux and matching tie, gracefully slid down a ramp to the adoring crowd never missing a beat in the song. The audience absolutely lapped it up as their hero smoothly sang his way into their hearts. As a neophyte to the Buble phenomenon, it was quite a sight to behold, and this was only the first song.

I’m convinced that the key to Buble’s success, besides his vocal prowess, is his interaction, and interplay, with the fans. For instance, after he had crooned his final note of “Fever”, the singer mockingly called out his last name as ‘BOO-bla’. It was one of those self-deprecating moments where you knew this guy didn’t take himself that serious. He was just glad to be there. As he was scanning the crowd, in the back of the arena he barely made out the message of a hand-drawn sign. Then he voiced the words, “I’m celebrating my 21st birthday with Michael Buble.” When the audience confirmed it, the entertainer promptly invited the young lady to the front of the stage where he led 14,000 people to sing “Happy Birthday” to Jaime. He even autographed her sign afterwards. This magical moment wasn’t lost on anyone inside the arena. At this point, I understood what it was about the singer that inspired such devotion.

Not only does ‘BOO-bla’ sing smart songs in concert, he has an aura about him that compels even complete strangers to feel as though they’re in the presence of a good friend. Throughout the course of the evening, this engaging artist would sing a series of songs then take a few minutes to chat with the audience about life in general. On more than one occasion, he acknowledged not only his incredible luck, but thanked everyone in attendance for making his dreams come true.

And seriously, some of the best moments occurred when the singer addressed the crowd. His remarks always left everyone roaring with laughter. His bit about Justin Bieber was priceless. When he spoke about the trials and tribulation of tending to the needs of his month-old son, the parents in this crowd knew exactly what he was talking about – and they couldn’t stop chuckling at the young father’s perplexing problems. Buble was fresh off a three-week stint of getting only two hours a night sleep because he was constantly on ‘daddy alert’.

When the singer told the audience how happy he was to be back on the road again, you couldn’t help but smile. His first real dose of fatherhood had thrown him for a complete, uncontrollable loop. Yeah, he’s got a beautiful wife and child, but changing diapers just wasn’t for him. You could sense a spirit of optimism in Buble that the next time he returned home, he was hoping his son would be walking and talking, and maybe even crooning a few bars as well. This guy is funny, and his anecdotes created a special bond with everyone inside.

Through the course of the evening, I surprisingly recognized several of the tunes the crooner warbled in his own soulful way. His version of Van Morrison’s “Moon Dance” was fantastic.  The two Bee Gee’s numbers he selected to perform, “To Love Somebody” and “How Do You Mend a Broken Heart” was wonderfully reinterpreted by the singer. The only puzzling number in the set list was the decision to cover Daft Punk’s surprise summer hit, “Get Lucky.” I guarantee that at least 85 percent of this audience had no clue as to who Daft Punk was, nor cared to find out. The song seemed to be an odd number out of the great songs he selected to perform.

After the initial burst of flames to start the show, nothing was really over the top as far as the stage production went, which added more class to the show. The second mini-stage at the back of the arena was a nice touch. Buble happily walked the entire aisle to the stage shaking as many hands as possible along the way. When he finally arrived to the delighted cheers of the crowd, he was joined by Naturally 7, adding another dimension to the songs they performed. The entire audience came alive, especially when red and white tissue hearts started raining down on everyone during the Buble’s rendition of The Beatles’ “All You Need is Love.”

The most telling portion of the show was also its most significant moment. Sans microphone, Buble projected his magnificent voice to all four corners of the arena while he sang Leon Russell’s touching classic, “A Song for You.”  As this exceptional moment was coming to a close, for some reason an obscure lyric I once wrote down that The Who’s Pete Townshend wrote came to mind. “It’s the singer, not the song that makes the music move along.” No truer words were ever spoken.