In The Long Run, Life’s Been Good to The Eagles 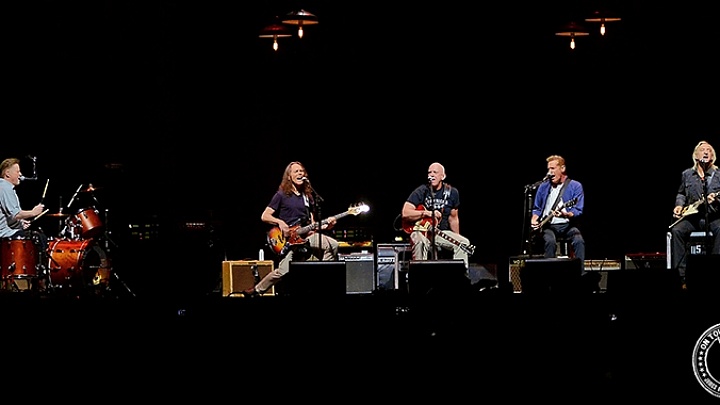 Anticipation is one of those unpredictable human emotions people have learned to temper over the course of their lives. Everyone loves the euphoric feeling of hoping for the best, yet there’s always that little voice inside one’s head cautioning you not to raise those expectations too high. That was the frame of mind I found myself in anticipating the second night of the Eagles sold-out performance at the American Airlines Center in Dallas, Texas. 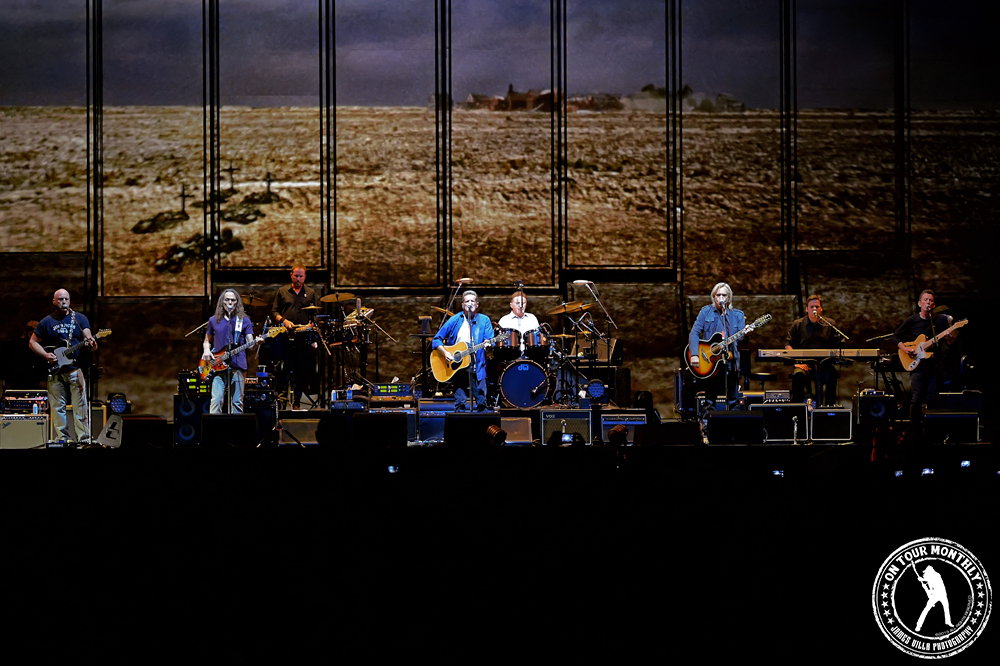 Sports fans know all too well how anticipation can ruin a game once it gets underway. When it comes to music, especially concerts, that sensation takes on a completely different perspective. When you spend good money to attend a performance, you have a good idea what you’re getting yourself into the moment you purchase the ticket. With the Eagles, that purchase meant one thing and one thing only. You were buying yourself a symbolic trip down memory lane.

Every song featured in the set list of the History of the Eagles tour unlocked some sort of forgotten past for those in attendance this evening. You could literally see people instantly transport themselves back through time when the Eagles sang a song near and dear to their hearts. From a writer’s standpoint, it was one of the most amazing experiences you could ever behold. The fact that various compositions performed this night held a special meaning in some form or fashion to those watching was special to behold. Indeed, the Eagles music served as a benchmark on the timeline of the lives of those not only attending this particular show, but every single future stop the band would make on their fall trek across the fruited plains.

The decade of the ’70 belonged to the Eagles. Their six studio albums, written between 1971 and 1978, contained so many classic pieces of work it was nearly impossible to single out any one tune as the best song ever written. Perhaps the ultimate compliment the band received came with the release of their Greatest Hits album in 1976. Today, it is the second-best selling album in music history, behind Michael Jackson’s Thriller. All nine songs on that epic masterpiece were performed this night.

One of the great surprises of this evening was the introduction of former Eagle founder Bernie Leadon, who was introduced by Don Henley before the second song, “Train Leaves Here This Morning.” The song was significant explained Glenn Frey, because it is the only composition all four original members wrote together during their relatively short time together. Frey went on to explain that the other original Eagle, Randy Meisner, was home recuperating from a health scare, otherwise he would have been on this tour as well. Interestingly enough, there was absolutely no mention of Don Felder the entire night. Unfortunately, no olive branch was extended in his direction for this tour. With lawsuits he filed against Henley and Frey still pending, it would have been awkward and extremely difficult for the pair to perform music every night alongside someone who was suing them. He was replaced by guitarist Steuart Smith.

For those that arrived early to the arena, and it wasn’t many, they were treated to a 30-minute set by JD & the Straight Shot. This band based out of New York City was hand-picked by Don Henley to open the show. All the musicians on stage were exceptional performers, and their classic take on blues-rock music was quite good. The band’s rendition of “White Bird” – made famous by Jefferson Airplane though originally recorded by Its a Beautiful Day – was the standout song, though arguably the whole half-hour the band was onstage turned into an enjoyable highlight.

If you’re a fan of the AMC hit, Hell on Wheels, you were treated to theme song of the show the band wrote, “Can’t Make Tears.” Played in its entirety, the composition was also another stellar moment. Again, it’s too bad that JD played to a nearly empty arena, but for those hearty souls that were there, the band and their music was a very pleasant surprise. Another added bonus was the free CD offered to anyone who would provide an email address at their merchandise booth after their show.

Then it was time for the main event. Every seat in the arena was filled by the announced 8 p.m. start time.

This three-hour show was broken into two segments. The first 45 minutes consisted of the ‘peaceful easy feeling’ that defined the Eagles country rock sound from 1971 through 1975. Both Henley and Frey took turns recounting those heady days where the only thing that mattered was music, girls and the occasional good time. After a short intermission, the second half turned into the electrified ‘life in the fast lane’ that guitarist Joe Walsh helped usher in when he replaced Bernie Leadon in 1976. The soulful tenor voice of bassist Timothy B. Schmit found its way into The Eagles lineup when he replaced Randy Meisner for the band’s last studio offering in 1978, The Long Run. And then recalled Schmit, with a bit of sarcasm in his voice on stage, the bass player said, “The band broke up.” It was an ironic, yet funny observation 35 years after the fact, but in the hearts and minds of this audience, the Eagles never really went away.

For some reason, Henley and Frey were adamant about not having any cell phones record any portion of their show. I’m sure if you were up in the nose bleed sections it didn’t matter, but on the floor in front of the band, it was literally a cell free zone. There were special ushers on the floor whose sole job was to be on the lookout for anyone raising their electronic device toward the stage for more than 30 seconds. Taking pictures of the band was okay; video would get you thrown out of the arena. No one in the first 30 or so rows dared ‘take it to the limit’ for fear they’d be shown the door.

It should be noted that the decision by Joe Walsh to join the Eagles probably saved his life. He returned the favor by plugging the band into his own electric rock intensity that resulted in the group’s two most successful studio recordings, Hotel California and The Long Run. Tonight, Henley and Frey paid homage to the former presidential candidate by incorporating three of his solo classics, “Life’s Been Good to Me”, “Funk #49” and “Rocky Mountain Way” into the second half of their show.

As the final strains of “Desperado” ended the audience’s magnificent walk through their history with the Eagles, you couldn’t help but wonder if this might be the final time this legendary group ever takes the stage. Tonight, the 42-year odyssey of the Eagles was cleverly presented on stage. Though the years had certainly changed everyone’s appearance, band included, one very important factor remained the same. The music itself never aged. The songs this band created have, and always will, remain timeless in the minds of those that wrote the music, and the millions of hearts who were touched by it.