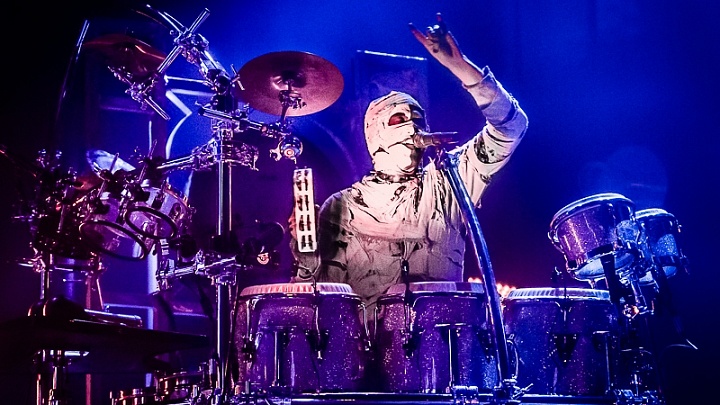 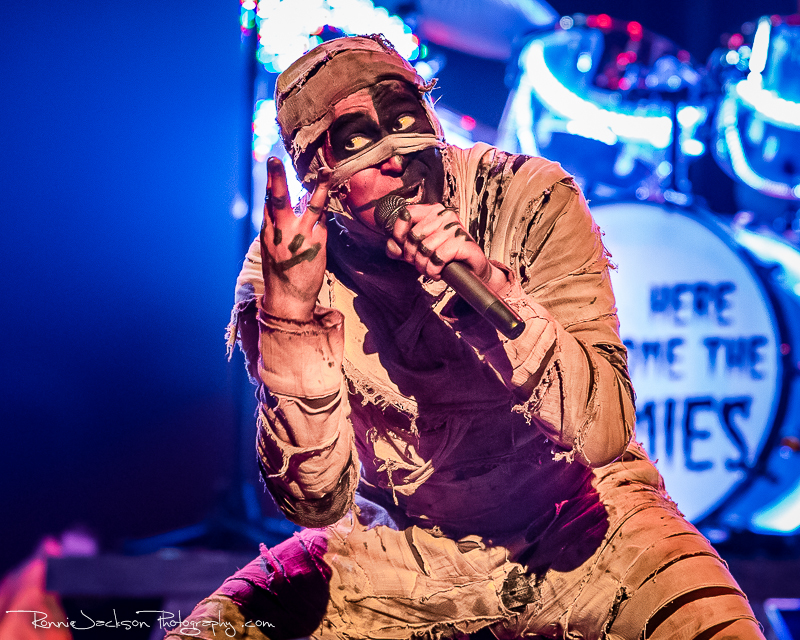 They’re creepy and they’re kooky,
Mysterious and spooky,
They’re all together ooky,
Here Come The Mummies

Seriously, Here Come the Mummies would make a great sit-com. The tagline would be simple.

Several well-preserved mummies from ancient Egypt are inadvertently released from a 4,000-year old curse by a couple of bumbling musicians working as waiters at a museum gala. As they gather around the frightened musicians, a frantic event planner interrupts the assembled mob asking if they are the band. The two musicians suddenly look at each other and say sure. When asked the name of the group, the pair says, “Here Comes the Mummies!” Cut to the mummies all performing on stage with the crowd dancing wildly in front of them.

Yeah, I know it sounds silly, but if you attended this all-ages Halloween extravaganza at the House of Blues in Dallas, Texas, the scenario I just described doesn’t sound that far-fetched at all. 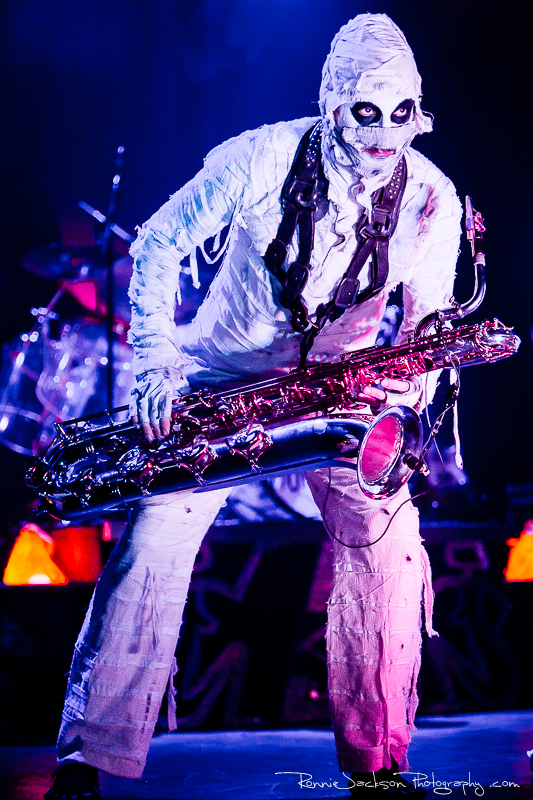 Here Come the Mummies consists of a dozen or so extremely talented musicians dressed appropriately in designer gauze – of the ancient sort. One of them even goes ‘ape’ during a segment of the show. Their ‘funkified’ R&B sound lifted the spirits of everyone inside the venue and kept one and all sing and singing throughout the night. If this was your first encounter of the supernatural kind with these corporeal creatures, like yours truly, this was an experience through time and space you not even the ‘Twilight Zone’ could make up. Then again, if you were a veteran Mummy watcher, like hundreds in this audience obviously were, there wasn’t anything salacious about these stylish ‘mumsters’ at all.

HCTM first appeared in the desert oasis known as Nashville the year 2002 A.D. From the first moment they dragged themselves on stage it has been a journey of non-stop laughter and mayhem wherever these hip denizens of the night appear. Whether they are singing a song about the good ol’ days of Egypt, or just ripping off some means solos with their instruments, these dwellers of the underworld talent-wise are scary good. It only took a couple of songs into the show to realize the individual spirits that make up this spook-tacular outfit once inhabited the bodies of some of Music City’s top session players. To this day, their identities have been a tightly wrapped secret.

The vocal histrionics are a handled by an assortment of rags to riches characters including drummer Eddie Mummy, percussionist Java Mummy and guitarist Mummy Case. On stage is the only time you’ll hear any words – dirty or otherwise – are ever spoken. This was the group’s first live performance in Dallas, and for it to occur on All Hallows Eve added to the excitement. Veteran HCTM archeologists journeyed from the beyond to honor these revered Egyptian idols. Dressed in their Halloween best, these costumed celebrants danced the night away. 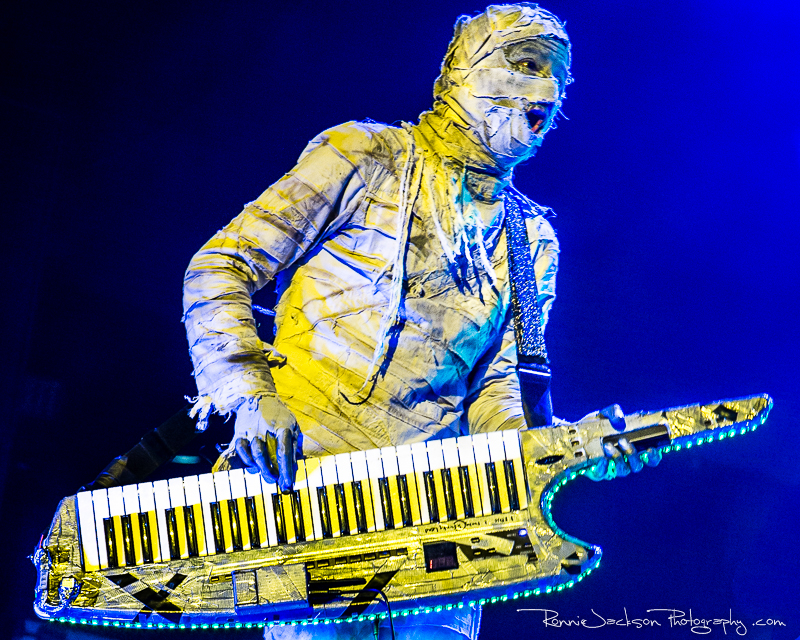 For the uninitiated, this group can prove to be a mild shock to the system when you first encounter their presence. They marched out on stage in cadence to take their respective places on stage. As controlled chaos ensued, and the Mummies started hitting their rhythm, pandemonium reigned supreme. Anything remotely resembling normalcy was thrown off the stage, along with anything else the Mummies could think of.

All kidding aside, Here Come the Mummies are certainly no novelty act. Teenage angst, whether it’s spontaneity or 4,000 years old, is the theme of the night. The gallows humor that band members are constantly mocking in their songs often reference ancient Egypt in hilarious ways. Truth be told, when it comes to storytelling, nothing is off limits when it comes to this group’s storied past. The crude innuendos aside, there are some serious chops and amazing vocals lurking underneath those strips of cloth. One thing for certain, with this band, having fun is a serious business.

The four-piece horn section is led by the unquestioned talents of Midnight Mummy and The Flu on baritone sax. Rounding out the quartet is B.B. Queen on trumpet and Mummy Rah on tenor sax. These four are masters of disco, jazz and especially R&B. The solos are as spine-tingling as the group arrangements, and when this quartet starts movin’ and groovin’, the crowd is right there with them.

Here Come the Mummies play a number of selections covering their sorted seven-album past. The 21-song set list was top-heavy with tunes from their recently released album, Cryptic. Fan favorites – you could tell by the cheering and the sing-alongs – like “Pants”, “Booty” and “Attack of the Weiner Man” had everyone laughing and cheering. Play that funky music mummy boys was the bump and grind theme of the night. And since this was Halloween, for this particular night of spook-tacular entertainment, Here Come The Mummies had it totally under wraps.