Mumford & Sons Make It Up to Dallas 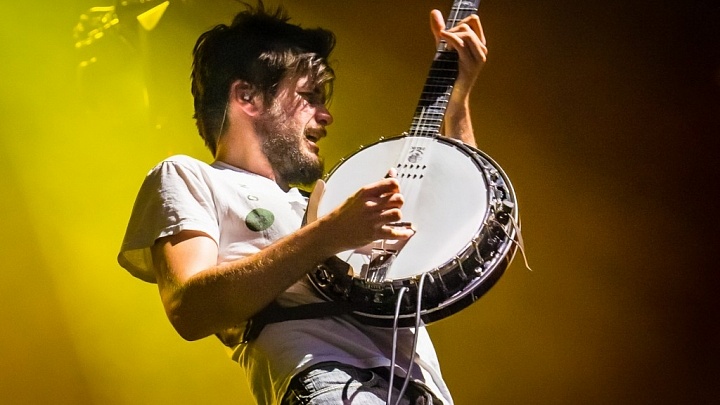 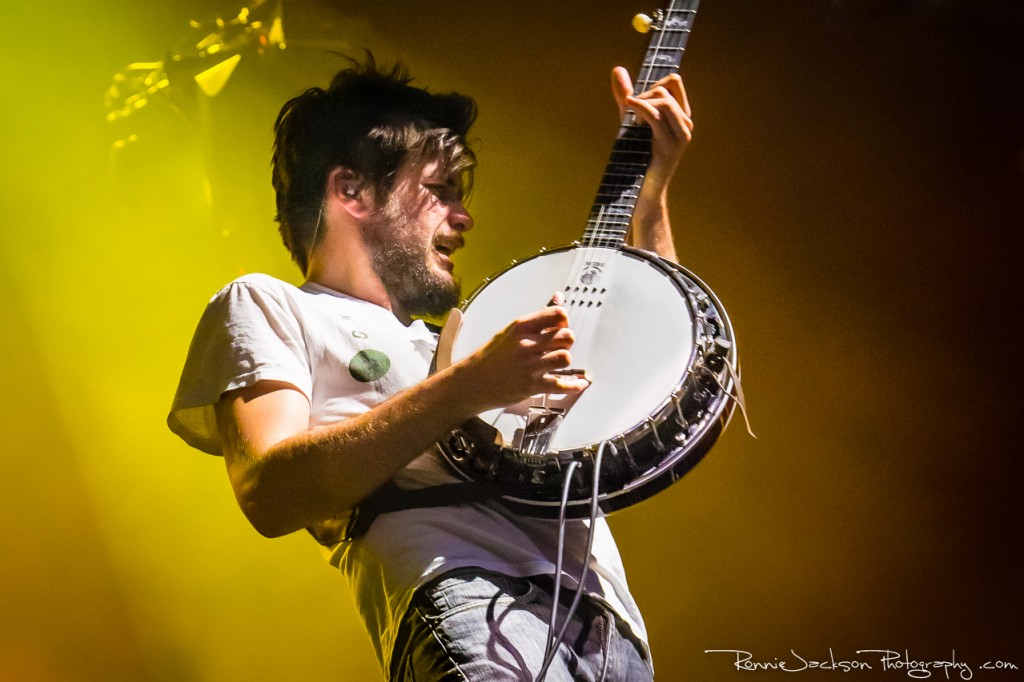 Yes it was hot. Yes this was toward the end of a very long tour. And yes, I’m sure the energy of the band would have been far different had this show gone off as scheduled on June 11. But as the infamous bumper sticker so subtly states, “Sh** Happens!” And it indeed it did with Mumford & Sons. So deal with it and quit your complaining.

Bassist Ted Dwane needed emergency surgery to remove a brain clot from his head. Instead of canceling the tour, the band postponed several dates while Dwane healed, and then resumed touring, which in itself was remarkable when you think about it. And for all those grumbling folks complaining about the heat – this is Texas in the summer jackasses. What did you expect the weather was going to be like outdoors – a balmy 80 degrees with a nice breeze to keep you cool? Compound that with at least 19,000 people jam packed into an amphitheater, and yeah, it’s probably going to be a tad bit uncomfortable. So stop your whining!

I absolutely applaud Mumford & Sons for keeping their word and returning to Dallas to make-up for a show that unfortunately rather than flat out cancel it (think Adele). I would love for someone to tell me the last time they saw a band perform a spirited, balls-to-the-wall concert at Gexa Energy Pavilion when the heat on stage easily topped 100, especially with the lights on? At least they didn’t call it quits 45 minutes into the show and walk off the stage (think Kings of Leon).

I’m not particularly a fan of this bluegrass / folk rock movement that has swept the country. But that is irrelevant because the genre has gained a tremendous foothold in this country and it isn’t about to go away anytime soon. There’s something to be said about a beautiful voice backed by impeccable instrument playing, and accompanied by beautiful vocal harmonies. And when the songs are well-crafted, even the most stubborn, like yours truly, can’t help but tip your hat in appreciation. Or in this case, sweat profusely.

This British folk rock act consisting of Marcus Mumford, Ben Lovett, Winston Marshall and Ted Dwane literally came out of nowhere the past couple of years to cast an undeniable spell with their back-to-basics approach to music. This band accomplished this monumental task without a monster guitarist (three of them perform a variety of stringed instruments), or a flamboyant lead singer prancing about the stage. They did have a great hit single, but it took two years for radio to figure it out. This ‘band of brothers’ from across the pond, accomplished their musical triumphs the old-fashioned way. They stripped away all the trappings of wealth and presented themselves as openly and honestly as possible.

If anything, the foundation for Mumford & Sons tremendous success and appeal can be traced directly back to the motion picture soundtrack O Brother! Where Art Thou? Released in 2000, this multi-platinum disc of classic folk-styled songs sparked a renaissance of Depression era music at the time, but slowly lost its panache. Marcus Mumford and his mates deserve a lot of credit for breathing new life into this combination of country, bluegrass and gospel music rolled into one. With only two albums under their belt, this British quartet has managed to capture the warmth and bittersweet simplicity of music again. It also earned them a Grammy in 2013 for best album of the year in Babel, as well as a legion of adoring fans from coast to coast, if not worldwide.

As demonstrated this evening, Mumford & Sons are gladly spearheading the roots music movement toward the center of today’s pop culture. Simple music is en vogue. Dexterity with multiple instruments, especially the stringed variety, is cool. I’m not sure what area of the subconscious this band has tapped into with their music, but tonight the undeniable appeal of their music was on display for one and all to enjoy.

Mumford & Sons is one of those rare bands to witness live on any occasion. For this sold out crowd, it didn’t matter whether it was date night, solo night or hang out with your friend’s night, everyone was welcomed to join in on the festival of fun. You didn’t have to be a student of Mumford’s music to enjoy it either. If you appreciate harmonized songs presented in a raw, pure form then this was the place for you. Regardless of the issues you had with the venue, parking ,or the Texas heat, the band put on a stellar performance.

As evidence by this adoring crowd, it’s clear that this London quartet is feeding a hunger that has long lay dormant in the wake of the aforementioned O Brother! Where Art Thou? Mumford takes you back in time before technology and the Internet disrupted everyone’s lives. Our lives were simpler and the music was distinct as well as comforting. Tonight, this audience witnessed a band that didn’t try to dupe them with superstar trappings or a gimmicky stage show. The clothing these four wore on stage was typical of the music they performed – straightforward and honest.

There isn’t anything challenging or musically ambitious about this group, and that’s why it works. In a distinctive way, Mumford & Sons have built up a unique trust with their audiences. Yeah, these British lads were all privately educated, and one even comes from a very privileged background, but none of their hi-brow past comes across in the music. The group is feeding an insatiable hunger that has also enabled other upstarts like The Lumineers and Alabama Shakes to carve out their own musical niche in the Americana universe.

Sometimes a band gets lucky and captures exactly what it intended to do on record. With Mumford however, there was no luck involved. This band didn’t check with the gatekeepers of music when it decided to pursue a musical direction focused on vocal harmonies and acoustic instruments. As demonstrated throughout the course of this night, an unpretentious approach to songwriting can indeed be beautiful when presented in an uncomplicated manner.

For too long, music has been an assault on the senses where the loud and bombastic approach was used to get your attention. You instantly became disposable once you reached the mainstream, but at least you got your 15 minutes. As Mumford & Sons clearly demonstrated this evening, honesty in the way you carry yourself, and the modest way in which you create a sound, will take you a long way. And as far as those few moments of fleeting fame for the band, forget it! They’re here to stay.