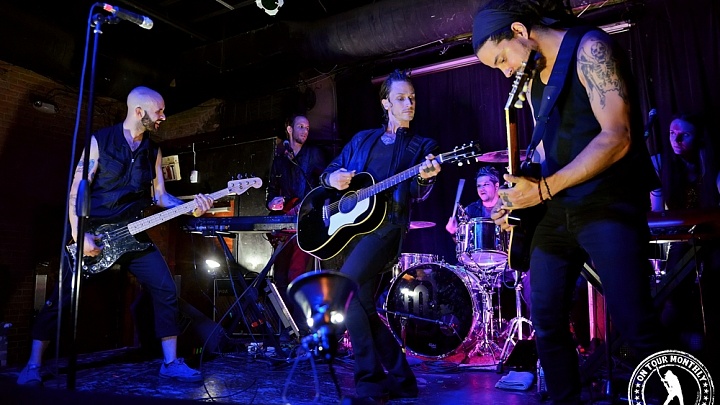 “One of the Best Shows I Have Ever Seen“

For the first time in several years, the New York based rock outfit known as Ours was performing in Dallas. This was actually the first time they had truly toured in awhile, taking a hiatus while front man Jimmy Gnecco worked and promoted his solo music, but now Ours was back with a vengeance. A few months before, they had released their fourth studio record, and with the instant classics spawned from “Ballet the Boxer 1” along with the older hits they would surely be playing, there was little doubt on anyone’s mind that the band was going to amaze.

In what’s become standard (albeit unfortunate) concert etiquette, the majority of the people didn’t show up until the final opening band was wrapping up, and once they finished people swarmed the few empty spots in front of the stage, staking their claim. I have honestly never seen the Prophet Bar this packed before, looking like it was very near capacity. That still wasn’t going to take away from the intimacy of this performance, though.

At 11:16 the band began filing on stage, too much fanfare, but of course it was Jimmy Gnecco who got the loudest cheers, and no sooner had they all gotten situated, then they got the show underway.

Drummer Dennis Zimmer laid into his bass drum, creating the thunderous beat that is the backbone of “Pretty Pain”, the lead track from “Ballet the Boxer 1”. The rest of the band slowly and rather quietly joined in, but as soon as he opened his mouth all eyes turned to Jimmy, whose voice sounded more crisp and proved to be more potent than it even comes across on the recordings, commanding the crowd with ease while he belted into the microphone. There wasn’t much time for the audience to applaud, as they tore right into the subsequent song on the record, “Emergency”. The band, which also featured the likes of Race on guitar and keys, bassist Chris Goodlof, guitarist Static and keyboardist April Bauer, really came alive on that stellar rock number. After the first time he sang the songs title, Jimmy conducted himself very fluidly with the music, turning around to face the drums and thrusting his fist in the air in perfect synch with what Dennis was laying down, showing what a tight operation they’re running. 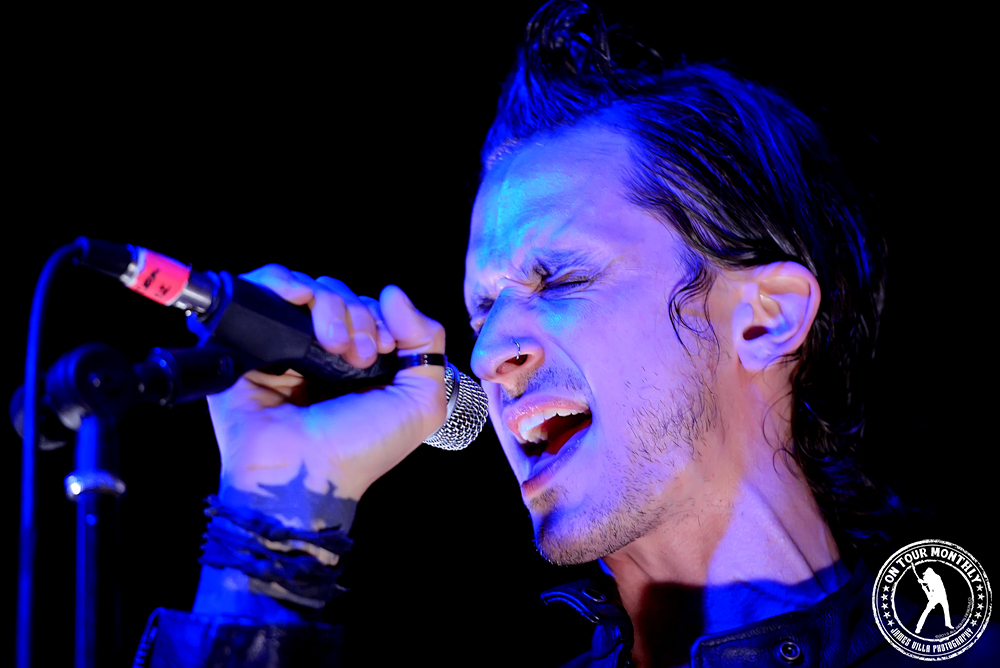 The ecstatic crowd finally was able to voice their excitement, while Jimmy walked over and picked up an acoustic guitar, instantly picking things back up with another song “Here Is the Light” from their debut album, which wound up being a real crowd pleaser. Jimmy was back to being the fiery front man he is, while Race added a second dose of keys on another one from their newest batch of songs, “Devil”. The at times semi-operatic song was a real highlight of the night; highlighting the striking range Jimmy is capable of, hitting some beautiful falsetto notes that left you awestruck. Race went back to his guitar as they bled the last bit of the previous song into “Coming for You”, though it was Static that Jimmy drew attention to during a brief instrumental break, as he began to viciously shred on his guitar, demonstrating what a slick guitarist he is.

They weren’t letting up, and while Race and Chris exchanged instruments, the other band members started softly clapping, encouraging everyone else to, and eventually most of the crowd was partaking in it, too. That served as a nice setup to what is perhaps their most eerie sounding song, “Murder”, exploding into a real rush of rock when Jimmy belted out, “Bow down to the things that you let go of…”

Still unrelenting, the band swirled the music into the following song from 2008’s “Mercy…” record, allowing Jimmy time to again get his acoustic for the hauntingly beautiful “God Only Wants You”. The roar was almost deafening after that song concluded, everyone having loved it, and now Jimmy traded out his acoustic for an electric, while Race again focused on the keyboard for “Been Down”. “…Let’s get dirty…” said Jimmy before they began, a sentiment everyone agreed with. They were paying a lot of attention to “Ballet the Boxer 1”, and at this point had already done a song or two more than I expected from it, and more would follow, but for now they looked back to the “Mercy” album, pulling out “Willing”, which they transitioned into seamlessly. It was glorious, definitely Ours at their best, and was utterly amazing in the live environment. 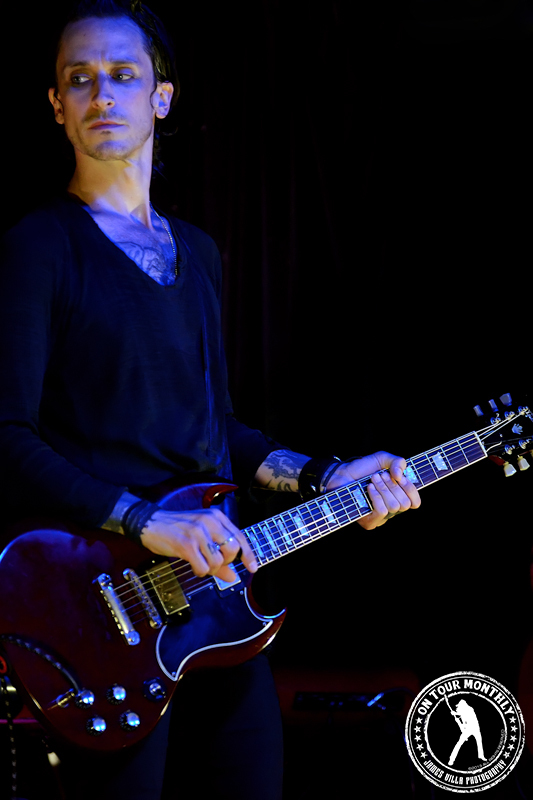 Things took an interesting turn afterwards, when Jimmy was addressing everyone and a fan told him he needed to take his shirt off. He laughed first, saying it was a new request, “…I didn’t know anyone was attracted to skinny bones…” he said, though the girl persisted. Another woman then joined in, saying if he took his shirt of she’d take off hers. He shrugged it all off, getting back to what he was saying, which was that they had been dirtying up some of their songs, and he said at some shows they got looks of disbelief that they were doing that. The crowd booed the fact that other fans didn’t like the artistic changes, and Jimmy informed everyone they would be getting the dirtied up version.

While that was going on, the woman who said she’d take her shirt off if he did, did just that. Her getting in a nearly naked state was apparently just what was needed to get Jimmy to remove his shirt, holding up his end of an agreement that was never even actually made. 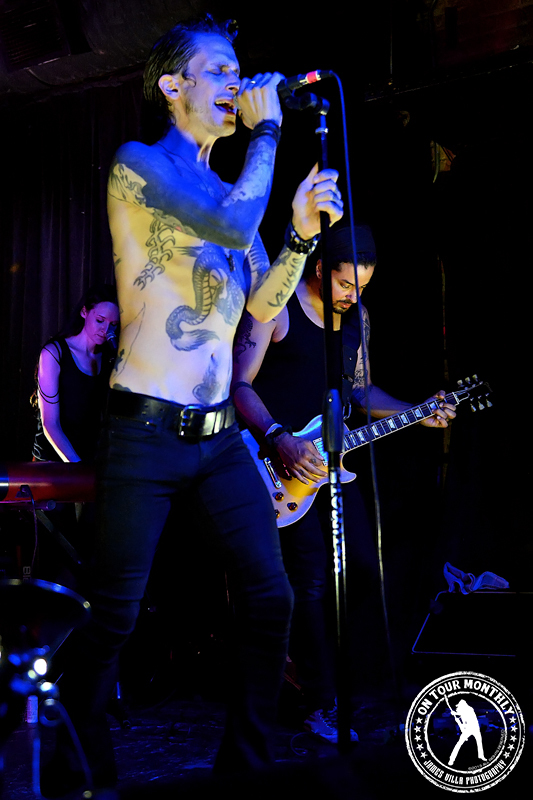 They roared back into action with a classic from “Distorted Lullabies”, “Sometimes”, before Jimmy yet again pulled out his acoustic, conversing with the fans as he got ready. “…I was stronger when I was younger…” he said, saying he used to be all muscles. He then asked for the members of Luna Arcade, the opening act that was on tour with Ours, to join them, and the five guys joined them. “Meet Me in the Tower.” said Jimmy, before starting the track from their 2001 debut. It was a stunning song, very beautiful as Jimmy sang the chorus, “…Finally today I’m able to put you in the ground. I’ll meet you in the ground.”, though there was a humorous moment to it, too. The lead singer of Luna Arcade was sharing Jimmys’ mic, and at one point Jimmy began laughing near uncontrollably. “…I’m sorry, he tickles me every time we sing this song…” Jimmy said, still cracking up, while the other singer grabbed his shirt and formed it into a knot right below his chest. It was hilarious, and after everyone recovered, they picked back up where they had left off.

The crowd went wild for “I’m a Monster”, and upon finishing it they returned to the full rock form. “…Let’s kick this back in.” Jimmy said in an excited tone, after stating that the night was winding down. They tackled a couple more songs from the new record, one being the aggressive rock number known as “Get ‘em Out”, which greatly boosted the already high energy level in the room, while Jimmy could be seen often thrusting his fists in the air in perfect time to the beats. As they got ready to conclude things with another slower number, Jimmy gave a very heartfelt thank you to everyone for coming out and paying the money to see a live show, noting that he knew times were and had been tough for awhile now. They then closed their whopping 84-minute long set with the final song from “Ballet the Boxer 1”, “Fall Into My Hands”, with the lengthy instrumental portion at the end being the best thing about. It was gentle yet compelling, allowing April, Chris, Dennis, Race and Static to really shine, before calling it a night.

Could that really be it, though? It was obvious that the fans hoped not, anxiously waiting to see the band walk back through the doors, which did happen after about twenty-seconds or so. This night wouldn’t have been complete without “Fallen Souls”, which was the only encore, making for an outstanding end to an unforgettable show.

Before this, I had never seen a full Ours show, only caught a portion of their set once before, but I was left utterly amazed. I’ve seen hundreds upon hundreds of concerts over the years, and this was one of the best overall shows I’ve ever witnessed.

You’ll be hard pressed to find a tighter group of musicians then what Ours is, being nothing short of a well-oiled machine on stage, and each individuals musicianship is off the charts, and when collected on stage they create something that rock is lacking in these days, and that’s a raw beast.

Bands like Ours are so much harder to come by these days, and while they have a dedicated following, I don’t know how they’re not a household name, because they should be. Furthermore, Jimmy Gnecco is hands down one of the best vocalists in modern day rock, and you just need to listen to a few of their songs to realize that.

In the end, Ours succeeded in making this show what a concert is meant to be, and that’s an unforgettable experience. What everyone saw transpire this night will stick with them for the rest of their lives, at least I know it will for me.