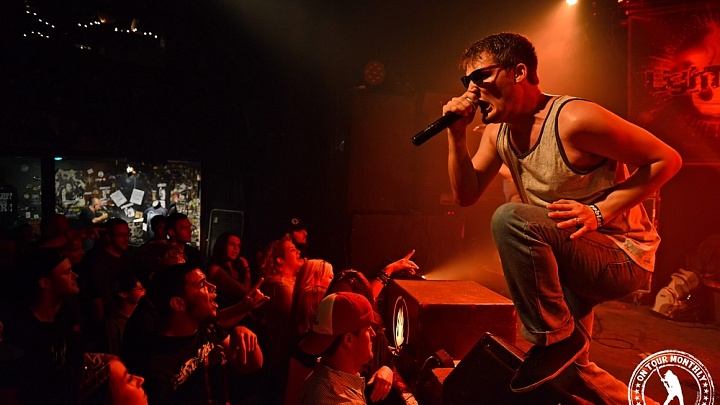 CD releases shows are always guaranteed to be a roaring good time for both the fans and band alike, and this night at the historic Curtain Club, the metal outfit known as Light the Fire was marking the release of their sophomore record.

Usually, they have a hip-hop song playing for their intro, creating a fun little start before they get down to business, so it was a slight surprise to fans when that didn’t happen. Instead, the curtain was drawn open to reveal a large scrim being held up, bearing the artwork of the new record, while two others hung on each side of the wall at the back of the stage. The fans had just enough time to marvel at before it was dropped and pulled off the stage, and no sooner had that been done, then front man Jeff Gunter jumped onto one of their boxes that bore both their logo and name. 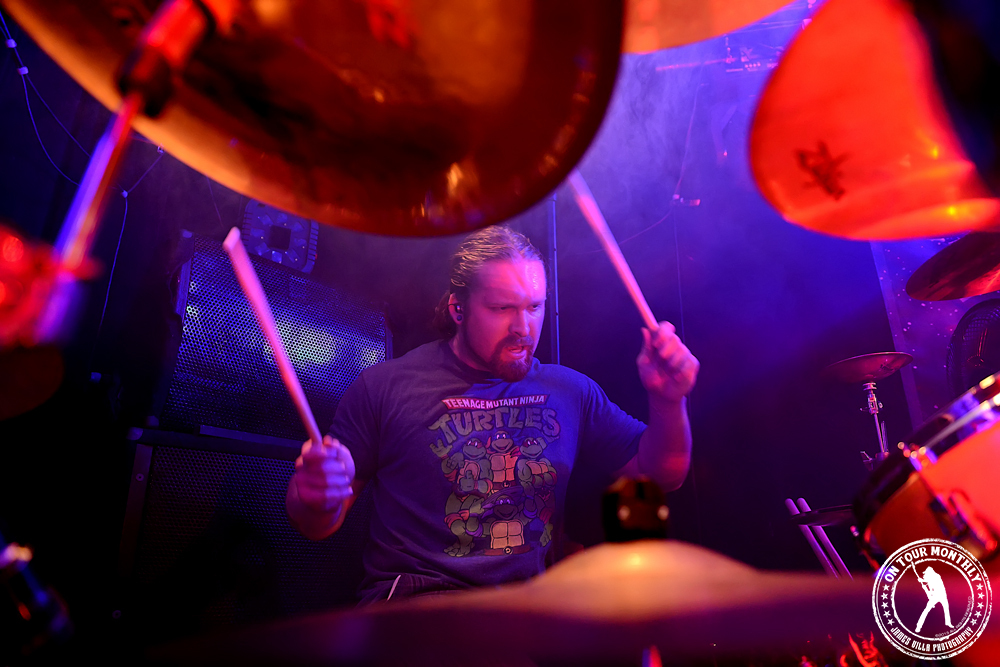 They quickly fired up their opening number, Blake “The Snake” Hein making a glorious racket on his drum kit, while guitarists Ryan Dickinson and Felix Lopez played the first chords of “Don’t Fail Me Now”. The energy was electric from the get go, with the four members at the forefront of the stage, which included bassist Andrew Penland, moving all about, thrashing and even jumping to the music they were cranking out, while out in the crowd a mosh pit seemed to form almost instantaneously. I found the best moment of that song to be towards the end, when Jeff went from standing on the box on stage left, to jumping backwards back onto the stage, all the while not missing a beat as he continued screaming, “Never will I ever hold this in…”.

Most of their set, particularly here at the start, had a flawless flow to it, and with the final notes from that track still resonating, Ryan segued them into the title track from EP number one, “Note To Self”. The catchy, near sing-along track only escalated the excitement, and most everyone was shouting the lyrics back at the band, like on the chorus, “We are the proud, we are the strong. Although we fall we’ll carry on…” That, like most of their others songs, has incredibly positive lyrical content, giving a real upbeat quality to this heavier metal band.

Again that song was bridged perfectly into the next, with the sample track with the intro for “Thoughts” kicking on, playing while Jeff told everyone he was a sucker for crowd participation and wanted them to move closer to the stage. “…What if I decide to jump?” he said to everyone. It seemed perfectly timed, and right as he was wrapping it up was when Blake, Andrew and the rest of the group tore into the song. Those are three fantastic tracks from their debut, but they had yet to touch any of their newer material. That was about to change, though.

Jeff informed the fans that the new record was free this night for anyone who wanted one. “…I don’t care if you black. I don’t care if you’re white… I don’t care if you’re a sloth, you get a CD.” said Jeff, making a pretty good wisecrack with that last part. They then tackled a song form their new self-titled EP, the overall hefty number “The Masquerade”, which kept the rather ferocious onslaught going strong, and Ryans’ blistering solo during that one was quite impressive. Afterwards, they again segued directly into their next song (thanks to Blake), and the intensity level spiked with “Under My Skin”. They were going to make sure it stayed there, too.

However, first wanted to again take a minute to thank everyone for coming out to this monumental night. “…This is like coming home…” Andrew said, noting this was the fourth CD he had been fortunate enough to release in his life, and the fourth CD release show he had played here at the Curtain Club.”Does anyone remember System Overload!?” Jeff asked, getting a nice rise from the fans. “You know what, a lot of these people have stuck with me since System Overload.” Andrew added. They were then ready to unleash their hard-hitting love song on everyone, “Forever Grateful”. “…But it’s not called that at live shows.” Jeff said after mentioning it’s real name. “What do we call it?!” he shouted before lowering the mic down to a fan. “THUNDERCUNT!” the guy roared. That was repeated with a different fan, and by the third time, the whole audience was shouting it back at them. They hit the ground running on that one, and I found it to be the most charged segment of their performance, with Andrew, Felix, Ryan, Blake and Jeff all bringing something even a few steps above their A game. It was utter perfection, and I know I’ve said this before, but I’ll say it yet again, that’s the heaviest thing Light the Fire has ever done. It’s also possibly the best thing they’ve done. 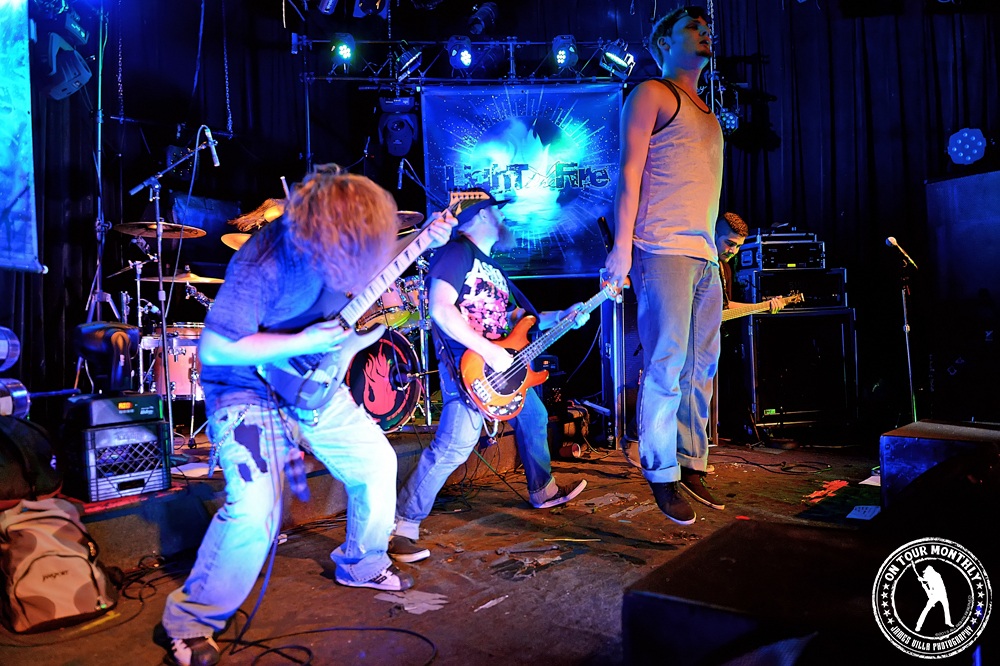 I got pretty excited when Jeff set up the next song as being the first one everyone would hear when they listened to the new album, because “All Or Nothing” is a personal favorite of mine. It mines a vein similar to that of the title track from their first effort, having an excellent blend of screaming and singing, and with the chorus, “I get the feeling that you don’t feel anything. Every day is a brand new struggle for me. Right now it’s all or nothing…”, it’s also an extremely infectious tune. Only one song now remained, and to close out their 36-minute long set they did “Stick To Your Guns”, but Jeff was going to ensure they went out with a bang.

Periodically throughout the night, he had been talking about jumping into the crowd and wanted to make sure everyone was packed in tight to catch him if he did so. So, as the song wound down, he jumped over to the first level of speakers on stage left. “Let’s do this.” he said, seemingly more to himself than to the crowd, as he pulled himself on top of the highest speaker. Admittedly, I’m not good at judging distance in any way, though I would guess he was probably fifteen to twenty feet above everyone as this point, and he continued singing once he got up there. “You better catch me.” was his only warning to the fans as he prepared to leap. Catch him they did, and not only was that a very memorable way to end an amazing show, but also one of the best moments I’ve seen at a concert in general.

It seemed as if they were done, but their fans weren’t going to tolerate that, and immediately began chanting for one more. “Have y’all heard of a band called The Scorpions?” Andrew asked after confirming the audience did indeed want one more song. They do a mean cover of “No One Like You”, and even though that last stunt couldn’t be topped, this was just icing on the cake, and the ultimate fun way to cap off what was hands down the best Light the Fire show I’ve ever seen.

They were impeccable this night, giving it their all, and in turn the fans fed off that, getting more rowdy and into the music than usual, and in turn the band fed off all of that. In terms of energy, it was a perfect storm.

It had only been about a month since the last time I saw Light the Fire, but the difference from then to now was certainly noticeable, with them being an even tighter outfit with stunning dynamics.

They also know how to work the crowd just right. Sure, there were times Jeff roared at everyone to make some news, though without the condescending attitude that some bands add to statements like that. You know, the bands that make it seem more like a command than a request, like they deserve it rather than working for it. Light the Fire worked for it and definitely earned it, and at other times even added some humor to it, like at one point when trying to get a rise from their fans Jeff asked Andrew if he heard anything. “I must be going deaf, man. I didn’t hear anything.” Andrew responded, and that was repeated another time or two before finally getting the desired reaction from everyone.

They’re phenomenal musicians and great guys, and if you get a chance, go see Light the Fire live. Their show transcends traditional metal barriers, and regardless of if you’re a fan of the genre or not, you’ll find at least one aspect of their show that appeals to you, and perhaps engrosses you.