The Postal Service Makes a Rare Stop in Dallas 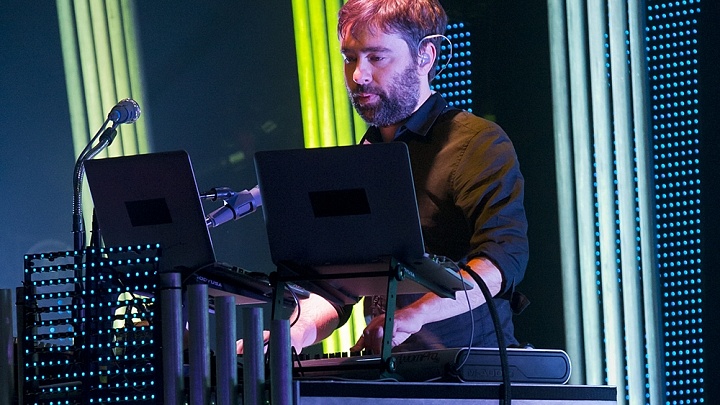 The music business has an interesting history of one-off recording projects that somehow took on a life of their own. When those unexpected moments occur, most times you only hear about the ‘incident’ through a documentary, or in one of those ‘whatever happened to’ stories. The chance to actually experience one of these musical anomalies live is akin to hitting a jackpot in a casino. But that’s exactly what happened for some 5,000 eager souls who played the odds and won, receiving a rare ducat to enter the venerable Verizon Wireless Theater in Grand Prairie, Texas to witness the rare ‘blue moon’ appearance of The Postal Service.

This accidental project, which released its only album in 2003, was one of those situations where the two principals involved – Death Cab For Cutie’s Ben Gibbert and electronic whiz kid Jimmy Tamborello – spent months sending music back and forth to one another via the U.S. Postal Service. When it was suggested they put together ten songs for an album, the two more or less shrugged their shoulders and agreed. As the music started coming together, the pair enlisted a friend, Jenny Lewis, to round out the vocal sound on several of the tracks. This project, despite its low priority status on everyone’s calendar, finally came together with a finished product released in February 2003. A handful of dates were performed by The Postal Service to commemorate the event. And then it was over. Everyone went back to concentrate on their own projects that were more important than this one-off ditty..

But all was not forgotten. Not by a long shot. 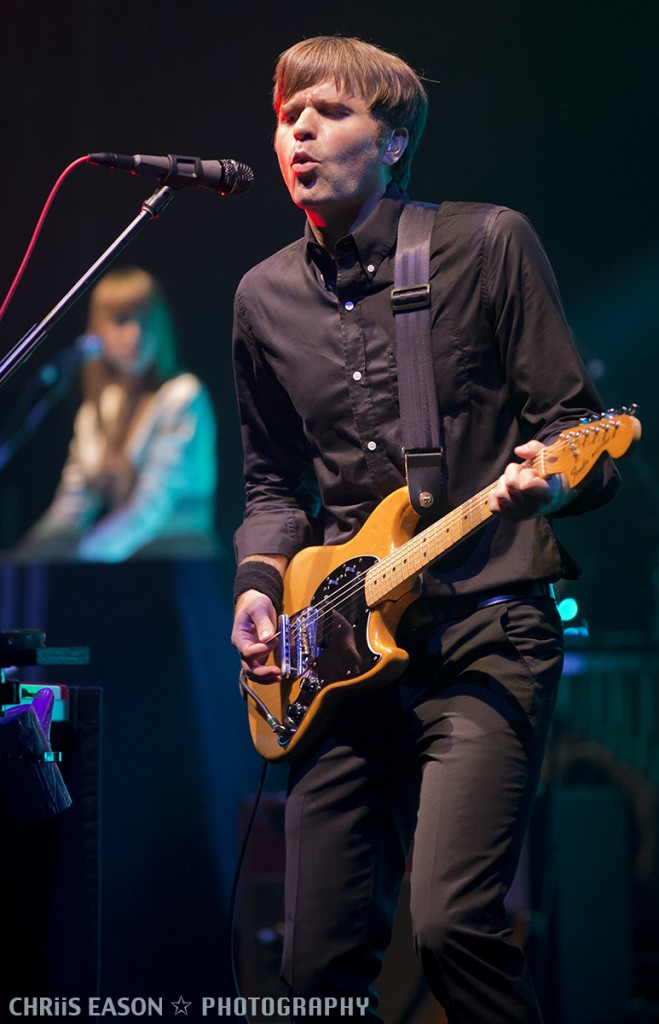 Give Up, the album’s title, did anything but that.  To date, this recording has sold in excess of one million copies. In an age when piracy, social media and the Internet has turned the music business on its collective head, an entity like The Postal Service should exist only in musical folklore. Yet here the band was, Gibbert, Tamborello and original vocalist Jenny Lewis, ready to perform their masterpiece before a sold out crowd at one of the most beautiful venues in the country.

Before waxing philosophically about The Postal Service, the opening act Ra Ra Riot deserves a hearty applause.  Yes, I know a lot of pundits are lamenting the loss of cellist Alexandra Lawn, who decided to hang up her Ra Ra strings, but that in no way detracts from this group’s accomplishments, past or present.  Unfortunately, we live in a strange society of so-called music aficionados. One moment they are singing a band’s praises. The next these self-anointed critics are questioning the band’s musical integrity because they dared to flaunt the unwritten Indie band rules they are supposed to follow.

Okay, so Ra Ra Riot changed directions with their new album, Beta Love, and lost a key member in the process. Big deal! No one seemed to miss the cellist this evening because her instrument was ably replaced by another touring musician. No one booed when they heard any of the selections from Ra Ra’s new record, like “Angel Love”, “Binary Mind”, “Dance with Me” and “I Shut Off”. No one left the confines of the theater to retreat into foyer to hang out with friends or drink adult beverages while the band was performed. This was the ideal band to open for The Postal Service, and this crowd more than showed their appreciation for the effort they put forth. Again, if you don’t like the synth direction the new album has taken the band in, move on! I suspect any detractors this evening had a change of heart once the nearly one hour performance was over.

To this day, The Postal Service remains a bit of a mystery that even a decoder ring couldn’t decipher. This tour is basically celebrating the ten-year anniversary of its only album. If you really think about that statement, it’s literally a miracle than anyone even cares. But they do, and every date on this tour has been a sell-out. With Subpop Records rereleasing the album, Gibbert and Tamborello even recorded two new songs, “Turn Around” and “A Tattered Line of String, which this audience cheered when the songs were introduced. Seriously, this show was a love fest from beginning to end.

The entire Give Up album was performed with each cut exuding its mysterious vibe. I’m sure these songs take on different meanings to people depending upon the type of facility in which they are performed. The cozy confines of the historic Fox created a beautiful ambiance that lent itself to a wonderful collaboration between the audience and performers. Both found a wonderful comfort zone throughout the evening in which to play and most importantly, listen.

Though many tonight would have called the entire evening a highlight, the biggest round of enthusiastic applause was saved for the one song that started it all – “(This Is) the Dream of Evan and Chan.” This masterpiece of lyrical wonder had the crowd buzzing from beginning to end. Ending the night’s festivities with “Brand New Colony” most certainly sealed the legacy of The Postal Service with this audience.

Absence indeed, makes the heart grow founder. On this momentous occasion, the axiom served as a sad reminder of what could have been had Gibbert and Tamborello not been preoccupied with their “real” jobs and concentrated on this one. Whether or not this trio wants to take a stab at adding to its legacy with another studio album, or let this reunion tour be the end of it, only time will tell. Until then, memories of a magical musical night will have to suffice.