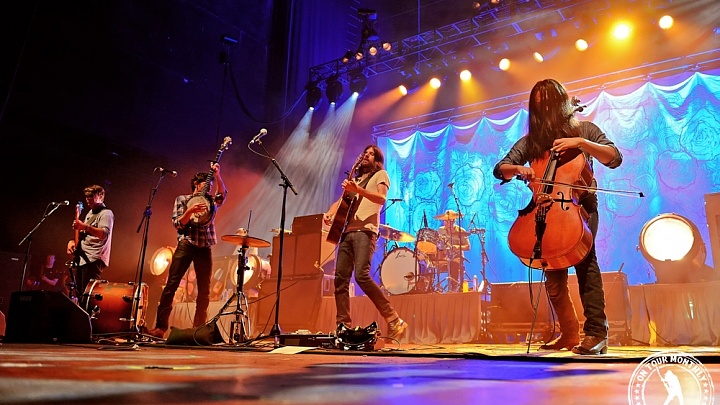 Psht. Rain? What rain? For the first few hours of this year’s KXT Summer Cut, festival-goers experienced nothing but blistering heat and suffocating humidity. The rain came later. Sure. But none of these will keep Dallas’ most faithful music fans from enjoying themselves. And lucky for them: Not a single act of the day disappointed.

Los Angeles-based powerhouse quintet Milo Greene led the sonic charge, beginning their half-hour set promptly at 4:25 p.m.Blending the melodic force of Of Monsters and Men with the harmonic precision of Nickel Creek, Milo Greene excelled in every element, beginning with “Don’t You Give Up On Me,” one of two singles off the newly released self-titled LP. And from there, all first-band-of-the-night suppositions were destroyed. Leading seamlessly into the careful croon of album favorite, “What’s The Matter,” and finishing the set with “1957,” the band’s largest hit to date, Milo Greene set the stage early, delivering what was to be one of the more dynamic performances of the evening.

Second to the main stage was Austin-based Alt-Country golden child Hayes Carll. A longtime veteran to the Dallas crowd, Hayes Carll took stage and did exactly what Hayes Carll does best: delivered punch-driven Texas country hooks fused with an authentically battered-and-beaten vocal style. A naturally storyteller, Carll interacted at every turn, offering a spoken-word rendition of each song shortly before launching into the songs themselves. But for as unabashed as his songs may be, he doesn’t give them quite the credit they deserve. Evocative and expository, his songs require zero explanation. As the sun wore down at its absolute hottest, Carll provided a much-needed cool to Gexa before bidding goodbye to a more-than-satisfied audience.

Los Angeles folk-rock quartet Dawes absolutely stunned as the third act on the main stage.  Diving headlong into the Laurel Canyon folk spirit, and unabashedly channeling The Pretender-era Jackson Browne, Dawes pieced together a heartfelt, iconic 45-minute setlist that struck deep. Despite a shaky opening due to technical difficulty, front man Taylor Goldsmith never faltered. By the middle of the set, crowd favorite, “When My Time Comes,” bled faultlessly into uplifting jam, “Most People,” before peaking with tear-jerking ballad, “A Little Bit of Everything.” Sonically soulful and harmonically flawless, Dawes perfectly conveyed both the music and the unassailable emotion with which it was written.

In proper form, high-octane Brooklyn duo Matt and Kim took the main stage just after Dawes with a slightly different crowd approach than the band before them. Their approach: Dance around as much as possible, spray the audience with a myriad of random objects (confetti and balloons, mostly), scream into the microphone and inject some of today’s hottest dance beats into their own songs. And good grief. It totally worked. It took just under 30 seconds for seemingly every crowd member (from the seats to the lawn) to jump to their feet and join the electrifying duo in dance. Their audience banter was priceless. Their stories were well-received. From beloved single, “Let’s Go,” to a customized rendition of The Harlem Shake, Matt and Kim absolutely annihilated convention with an awe-inspiring set that defined the tone for the rest of the evening. What a unique-yet-necessary inclusion onto the Summer Cut playbill.

GRACE POTTER AND THE NOCTURNALS

By 8:20 p.m., the sun had set and the temperature had dipped. Clouds were looming overhead but no water had yet hit the ground, save the teardrops induced by Dawes’ set a few hours prior. (Not by me. I totally didn’t cry. Like, at all. I swear.) Enter Grace Potter and the Nocturnals, a soulful Vermont five-piece that has laid waste to headlining shows and festival stops alike all year. A multi-instrumentalist and sultry sensualist herself, Grace Potter lived up to her namesake, demonstrating a calming presence onstage that made even the heavier songs in the set seem effortless and organic. Crowd favorite and inaugural album single, “Apologies,” sent chills down the spines of anyone that was even remotely listening, while punchier rock tunes like “Paris (Ooh La La),” delivered a jolt of attitude thinly veiled by a pretty voice. By 9:30, the rain had begun to fall, but Grace Potter had already upstaged any and all impending precipitation to come.

Ah, yes. The Avett Brothers. The headliners. The ones we all came to see.
The Avett Brothers took stage promptly at 9:50 p.m., and by the end of their encore, the only question left to ask was this, “How on earth are these guys not headlining every festival tour in the nation?” Equal parts bluegrass, folk, rock, and country have never before been so flawlessly represented in a single act, and Saturday night’s performance was living, breathing proof. Prior to their set, the rain had come and gone. The crowd had diminished as a result, but those who endured the elements got exactly what they came for.

Scott and Seth Avett delivered a hard-hitting 90-minute set,from the electrifying ballad, “Kick Drum Heart,” to the band’s most renowned hit, “I and Love and You.” Several songs from their newest release, The Carpenter, were featured as well, including, “The Once and Future Carpenter,” and set opener, “Down With the Shine.” Oh, and did I mention that the encore kicked off with a customized rendition of “The Yellow Rose of Texas?” I didn’t? Well. It happened.

From beginning to end and despite the weather, KXT Summer Cut didn’t disappoint in the slightest, offering a killer mix of emotion and energy. Check back soon for reviews from the local-artist side stage!