A Perfect Night with She & Him 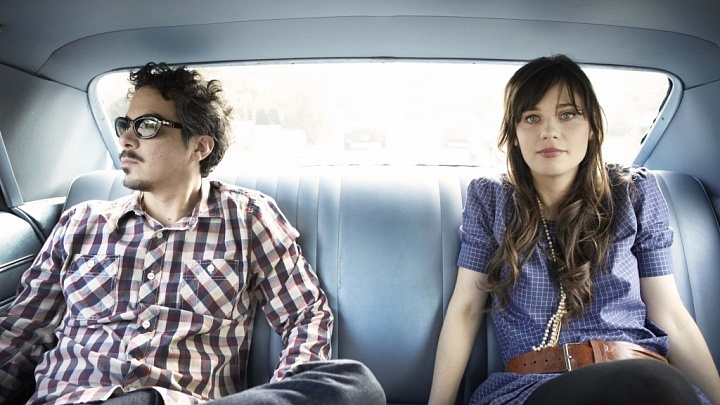 “A Perfect Night with Zooey & M”

It was an unforgettable night. The evening started off with Alabama folk duo, The Secret Sisters. Opening bands can be difficult to sit through; however, I thoroughly loved every bit of their forty minute set. Sisters Lydia and Laura Rogers had only a mere guitar that they shared and their voices. Their harmonies were flawless and divine. They smiled and praised each other’s talents after each song, making them that much more likable. Even though a majority of their songs were heavy on the heart, they left a smile on each face, including my own. They were a perfect gateway into what we had all been anticipating: She & Him.

The crowd, including me, went crazy when Zooey Deschanel and M. Ward walked on stage. I had seen Deschanel on screen before but never in person. I was no more than fifteen feet away from the stage, and I had an almost perfect view of the pair. Deschanel was wearing one of the most beautiful dresses I had ever seen, and I was in complete awe of her beauty and elegance. In between a song, someone in the audience yelled, “What are you wearing?”, and in a sarcastic tone she replied, “That’s none of your business.” She played it off and continued with one of my favorite songs, “I’ve Got Your Number Son” off their latest album, Volume 3.

M. Ward was easy on the eyes with the ladies, wooing them whenever he sang. I also believe it had something to do with the fact that he looked like Robert Downey Jr. I have heard plenty of impeccable guitarists throughout my years, but never one quite like him. His fingers moved up and down the neck faster than what my mind could process. During one particular song he grabbed a water bottle and began using it as a slide; it sounded completely flawless.

Deschanel is just as affable and funny on stage as she is on screen. She cracked jokes in between each song, but there were several memorable ones. While the band was tuning their instruments, Deschanel asked if there were any musicians in the crowd. A decent number screamed and hollered, and she replied by saying, “Wanna start a band? Oh wait, I already have one!” There are far too many actresses who become musicians and vice versa; however, not many succeed at both. Deschanel is one of the few that should, in fact, do both.

Ward’s insane guitar, piano, and voice skills intertwined with Deschanel’s impeccable voice, piano, and ukulele skills made for a perfect evening. I was shocked that the concert did not sell out because it very well should have. Those who did not attend this concert missed out on one of Dallas’ best concerts ever put on. They played well over twenty songs, including several covers. Although it was She & Him’s first time touring in Dallas, I hope it will not be their last.